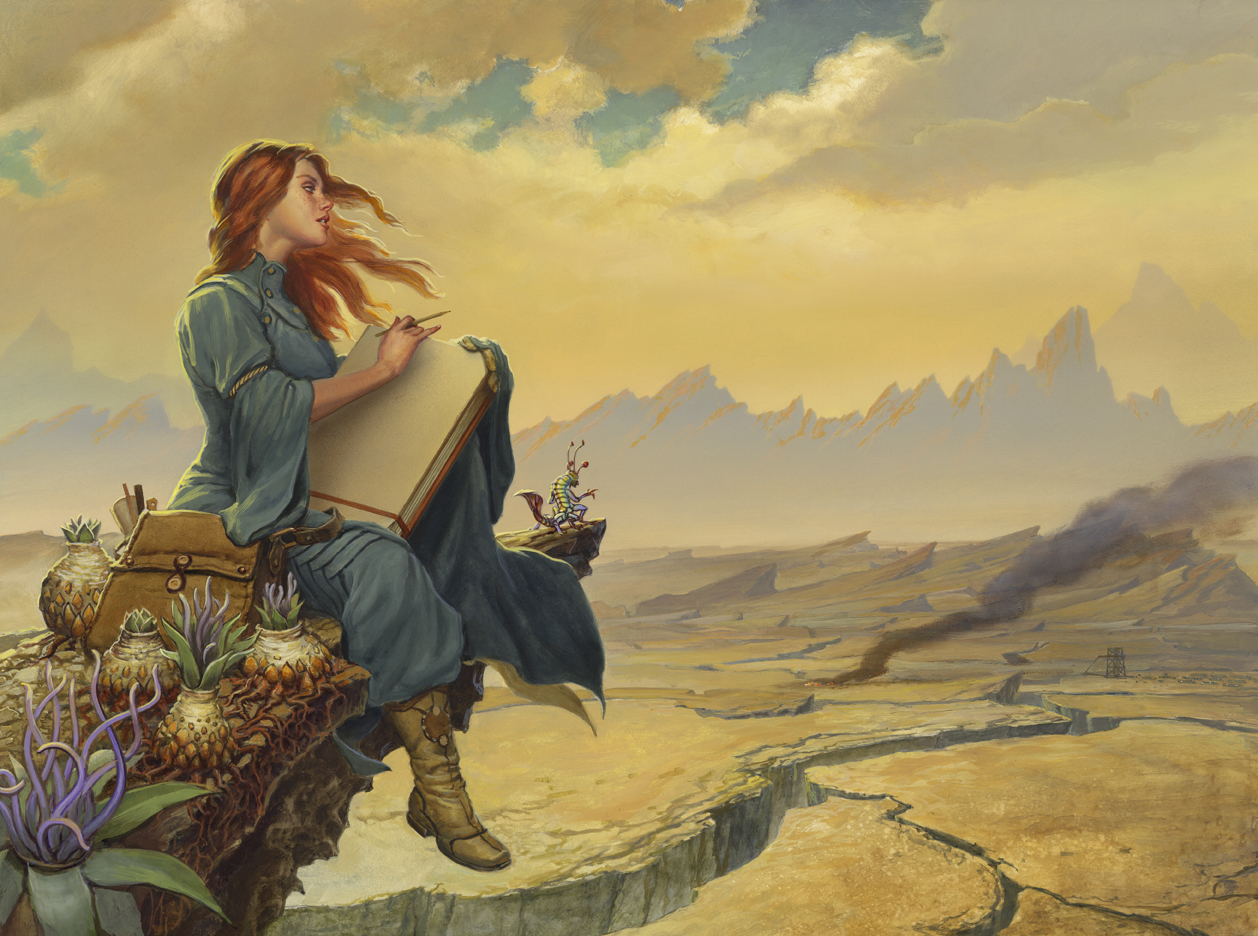 All of Brandon Sanderson’s main female characters in the Stormlight Archive are complex; they are more than simply plot devices for the male characters. Each has her own complex desires, backgrounds, and sets of actions. Also, importantly, each contributes to the plot in a meaningful way separate from a male character.

While the Stormlight Archive is not completely fallible, it is unique as one of the great fantasies that have real and interesting female characters. This article will focus on a few of the major female characters: Shallan Davar, Jasnah Kholin, Eshonai, and Lift. They are all strong, powerful, and yet not perfect. However, they are also not all the same as each other.

Who Are These Women Of The Stormlight Archive?

Shallan is a Lightweaver, one of the Orders of Knights Radiant. These especially powerful members of this world start to appear again after years of being solely myth and legend. While Shallan battles a dark past and difficult present, she also needs to figure out how to be a Lightweaver. One of the Knights Radiant as well, Jasnah Kholin is already a figure of strength even without her special powers. Revered as the greatest intellectual of the time, Jasnah does not accept explanations without evidence, nor does she let anyone push her around.

Sanderson originally brought Lift in as a side character in one of the short interludes. However, readers fell in love with her fun character and fascinating powers. (Their excitement for this character prompted Sanderson to write a whole book dedicated to her, Edgedancer.) The book got this name because Lift is an Edgedancer, another of the Orders of Knights Radiant. But, really, it’s her witty and protective personality that makes so many readers love her.

Unlike the women mentioned above, Eshonai is not a human. As discovered in the third book in The Stormlight Archive, her kind are the original inhabitants of the world. Due to a series of complicated events, there are very few left of her kind. Eshonai is one of their leaders and through a few scenes, readers get to see her perspective. She is doing what she knows is right and is doing it bravely. Despite being one of the perceived enemies, Eshonai is a character with depth.

These women are unique, inspiring, and overall wonderful to read.

Shallan comes from a seriously dysfunctional family and leaves her home to steal from Jasnah Kholin. To accomplish this, Shallan must get close to Jasnah and plans to do this through becoming her ward. Despite Jasnah being hard to impress, Shallan manages to win this spot in Jasnah’s life. As mentioned above, Jasnah is an incredible intellectual, but a combination of Shallan’s stubbornness and competence convinces her. In her dark past, Shallan had to learn pretty much everything on her own.

Understandably, then, she had gaps in her education. However, also understandably, the depth of what Shallan had learned and the skills she has obtained impressed Jasnah. Jasnah became a bit curious about this girl who just wouldn’t give up and, upon seeing her skills, Jasnah decides to give her a chance at being her ward. A female character based primarily on her skills, intellect, stubbornness, and power is still too rare outside of stories like the Stormlight Archive.

However, Shallan is a wonderful example of a woman who is neither perfect nor completely pure. Instead, she is complex and convoluted; for example, Shallan still revered Jasnah even while planning to rob her. Shallan is also strong and does not need a man to either save her physically or give her worth or power.

Often, it was her that saved the man instead of being saved by him. Shallan has a love life but is not defined by that man. She is an intellectual and an artist, but also not uptight or condescending. She is a gray-area type of female character we never see enough of. And her story’s so riveting to read.

As mentioned before, Jasnah Kholin was considered the greatest intellectual of her time. She has a critical mind, researches, and uses evidence to make decisions. This sometimes leads to her not quite fitting what society expects of her. As the daughter of the king, she is expected to uphold the empire and the religion that her dad believed in.

However, she does not conform. In her critical mind, Jasnah questioned the religion her father once believed in. Jasnah finds it unsound and does not change her mind, even when berated or when receiving hatred. This is not the only way in which Jasnah is unmovable and stands her ground.

The Power Of Jasnah

When teaching Shallan a real-world lesson, Jasnah goes into an unsafe area with her jewelry uncovered. Jasnah strode confidently, despite Shallan being understandably concerned and asking Jasnah to conceal their richness. As one may expect, a few men attempted to rob and hurt them. But Jasnah is not someone that can be messed with. She used her powers to kill all of the men, including the ones that were fleeing. This isn’t what many audiences would likely expect from a female character.

That kind of strength is not often seen in “good” female characters outside of series’ like The Stormlight Archive. Instead, many are so compassionate that they may even let harm come to themselves before teaching a lesson like this. While one may get mad at Jasnah, the same action being taken by a male character would likely be interpreted as a bit harsh, but not wrong. Jasnah takes shit from no one and does to them more kindly what they would have done to her. Her strength and surety in herself are inspiring and beautiful to see in a female character.

She had been there since the beginning. It was in Eshonai that the old king confided his research. And it was her that then told her elders that they must kill him; they could not let the old gods return. Eshonai knew her duty, even in her wild, young years, and she stepped into it. She was among those who murdered the king and as such sentenced their people to a slow death through the war of revenge. But she did it because it was necessary. Eshonai often argued with her sister against calling upon the old gods. Her sister wanted to use them to save their people.

Eshonai, however, remembered the stories and feared that her people would go back to being slaves. But then, when the military took over and made the decision to call upon the old gods, Eshonai was the one who went it. So that none of her people would have to die. It would just be her.

She stepped into a sacrificial role; typically in this role is a noble male character who sacrifices his soul for those under his protection. Often, the only time a female character has a sacrifice like this is to drive a male character to avenge her. But Eshonai is the protector of her people until her death, and even beyond. Her strength is in protecting and in pushing back against the evil that she knows is there, even when it costs her everything.

Readers first see Lift during a robbery. She is fun, interesting, and constantly defies expectations. From seeing her bring her friends back to life to realizing her mission in life is pretty much to eat, Lift’s life is exciting to read. She is in some ways a child, but her aging has slowed down significantly due to a gift from one of the world’s gods. This gift and another help her to be a thorn in the side of the great evil in The Stormlight Archive.

Though Lift is not exactly a child, she has a touch of childish ways mixed with a stubborn personality that fights against all levels of evil. She demonstrates incredible bravery, from arriving at the final battle when everyone else had run away to chase after her long-time stalker to save another. Lift doesn’t care for pointless rules but cares instead about being awesome, eating good food, and protecting the innocent.

Again, this sort of female character is exceptionally rare. Lift is stubborn, but Sanderson does not present her as spoiled or as a brat. She is a young girl but has an important role in saving their world. She does not rely on any man but instead is a welcome sight to the male protagonists who are grateful for her help, strength, and power.

The Women in Stormlight Archive Are Amazing

In conclusion, these four women are each great characters. Female characters are rarely written with such depth or even respect. They have roles beyond men, beyond sex, and beyond weakness. They are defined instead by their powers, their personalities, and their contribution to their world.

Additionally, these are not the only great female characters that Sanderson writes. He has many others, in the Stormlight Archive and also in his other series. It is so inspiring to see a strong and complex woman character in literature. It’s amazing to be able to see a woman character with depth and to be inspired by their actions and personality and not by their perceived beauty. Thank you, Sanderson, and please let’s keep making great female characters like these.