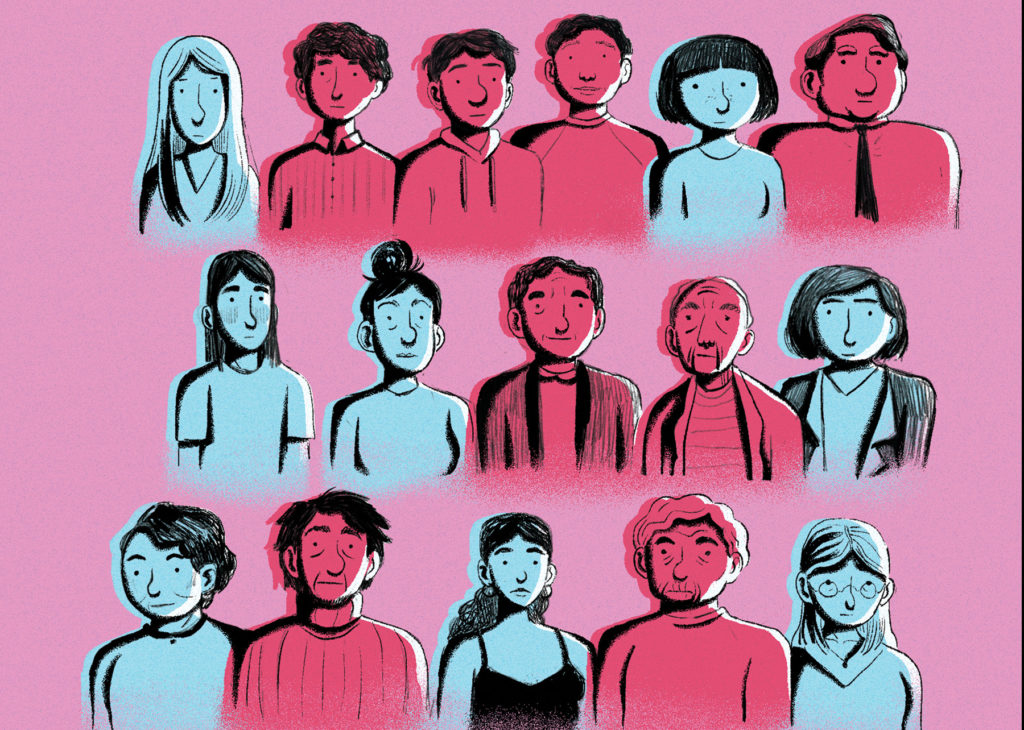 Woman World Is A Reflective Look At A World Without Men

The concept of an only-women-run society is nothing new in writing. Most of the time, this world gets portrayed as a paradise where there are no wars and everyone gets along. Sadly, stories focusing on this idea hardly ever start a larger conversation as to why society believes women are better off without men. Or rather, why society thinks all of womankind’s problems are tied to them. Luckily, Woman World, created by Aminder Dhaliwal, gives a reflective look at how a female society would run, providing more than the stereotypical “it’s-a-better-world-just-because” argument.

The Plot Of Woman World

Woman World begins with a married, scientist couple, the Sharmas, finding evidence to suggest that men are dying out. Their research showed that in their generation there are more women than men and the gender gap will only increase in future generations until men cease to exist. While the scientific community unanimously agreed there was a problem, society chose to ignore their findings and focused on other issues like the economy.

Time went on, and men slowly disappeared; Mother Nature caused environmental catastrophes, and people rioted in the streets. However, it was only when Dr. Sharma decided to focus on female-only pregnancy that the world suddenly had an opinion. (For, when the issue revolves around regulating a woman’s body, everyone is in attendance.) Unfortunately, by this time, it was too late. Dr. Sharma passed away before completing his research. Therefore, slowly but surely, men ceased to exist and a Woman World arose. Now, as the only survivors, women must recreate a civilized society from the ground up all on their own.

The Art Of Woman World

The art of Woman World is as simple as one would expect from a webcomic. It has mostly blank background panels, and when there is scenery, it’s comprised of lightly traced trees or grass. Despite the simplicity of the panels, what the webcomic succeeds in representing through its art is character diversity. Aminder Dhaliwal makes sure to portray an array of women in this new world with different shapes, skin tones, and ages.

The types of characters the series features range from an interracial, lesbian couple to a woman who had a mastectomy. Each woman contributes her own set of beliefs in order to improve society. This form of representation through art speaks wonders as it symbolizes how people of different backgrounds all have something to offer toward the betterment of society.

The story does not focus on just one voice but on a collection of different women of varying backgrounds. And, despite the series not featuring men, Aminder Dhaliwal’s art makes up for that fact by ensuring she represents all women in Woman World.

What Does Woman World Cover?

The topic surrounding the extinction of men in Woman World melds well with the commentary found throughout the comic. Dhaliwal’s webcomic takes the opportunity to point out different obstacles women in our current reality face through a comedic lens. As the women of Woman World have never known man, their reactions to present-day dilemmas emphasize the absurdity of it all.

Woman World uses its story to poke fun at the current issues women face. For example, there is a page where a female character finds a bag of men’s razors and deems them useless since they are not for women. (She assumes that male razors work differently from female ones.) This scenario references the current “pink tax” issue women face where a product marketed to women costs more despite the male version being the exact same thing only more affordable.

Throughout Woman World, there is an ongoing segment which focuses on a grandmother (who grew up with men) and her granddaughter, Emiko (who grew up without them). Emiko is a very curious girl who wants to learn as much as she can from her grandmother about men. These pages are the most interesting throughout the series since readers see the world from a fresh perspective in Emiko. She asks questions from her grandmother that would require both men and women to take an introspective look at themselves and the society we have built around us.

One page featuring them has Emiko ask the question “What makes a woman a woman?” This is perhaps the most powerful moment in Woman World as the grandmother ponders this question and essentially answers, “There is no specific definition for what makes a woman.” She brings up the fact that not all women have periods, breasts, or children; therefore, the definition of a woman is too broad. She teaches Emiko that for her to be a woman she just needs to announce it. It’s a very empowering moment for Emiko and the series as a whole, which elevates it from being just another comedic webcomic.

This series reinforces the importance of sisterhood as the women of Woman World must rely on each other to survive. In actual society, women often bring each other down rather than build each other up. While society considers men to be the source of women’s problems, women themselves can be their genders own worst enemy. We can be hypercritical of each other’s behaviors, looks, opinions, etc. However, Woman World demonstrates how much better our lives could be if we were just supportive of one another.

For example, there are scenes throughout the series where women worry about the continuation of the human race. This constant reminder causes anxiety throughout the new world. The series displays how openly discussing fears among the group can help alleviate mental health stress. This society comprised of women showcases a maternal environment where they take care of each other. This care ranges from women simply nursing each other through painful period cramps to discussing relationship problems.

Would The World Be Better Without Men?

From humorous commentary to serious discourse, Woman World features discussions on whether or not women are better off without men. The series does not shy away from the obstacles women have had to face. As a matter of fact, throughout the series, the women research history and take notice of the lack of female representation.

For example, there is a page dedicated to two women finding history books on artists, musicians, and playwrights. One of the women shows her annoyance at how the textbooks feature no women in these positions. Another example would be in a scene where Emiko learns about the Salem Witch Trials from her grandmother and how women burned at the stake. Emiko realistically has a hard time understanding why people would burn women alive during these times.

However, what the series does so well with this topic is that it never vilifies all men. While it portrays the female-led society as a paradise, it does not outright state the world is better off without men.

What The Series Considers…

Considering the majority of the main cast grew up without man, seeing history books on the female struggle may coerce them into thinking they were all bad. What Woman World does is have the women take everything with a grain of salt. They understand that women have undergone struggles in their history. But, thankfully, they rely heavily on the elders in their group to inform them of man’s former role in general society.

The grandmother character in Woman World never claims men were bad and that women are better off without them. As a matter of fact, in her first appearance, she displays disappointment in knowing that the current generation of women will never know them. The women showcase how, despite not knowing man, they understand they are missing something integral in their society. For example, there was a page dedicated to Father’s Day which shows the women coming together and celebrating in remembrance of them. Some of the women portray disappointment in not having a father figure in their lives.

What Does Woman World Mean?

Overall, Woman World reinforces the idea that men are necessary in the broader scheme of things. Not only for procreation (which is another overarching issue the women face every day) but for playing the roles of fathers, husbands, grandfathers, neighbors, teachers, or friends. Some may interpret Woman World as claiming women do better without men, but, if anything, the main idea promoted is that in order for society to improve everyone needs to have a voice and participate.

Woman World is available for purchase at Barnes and Noble and Amazon. For more comic analyses, visit our “Comics” page.