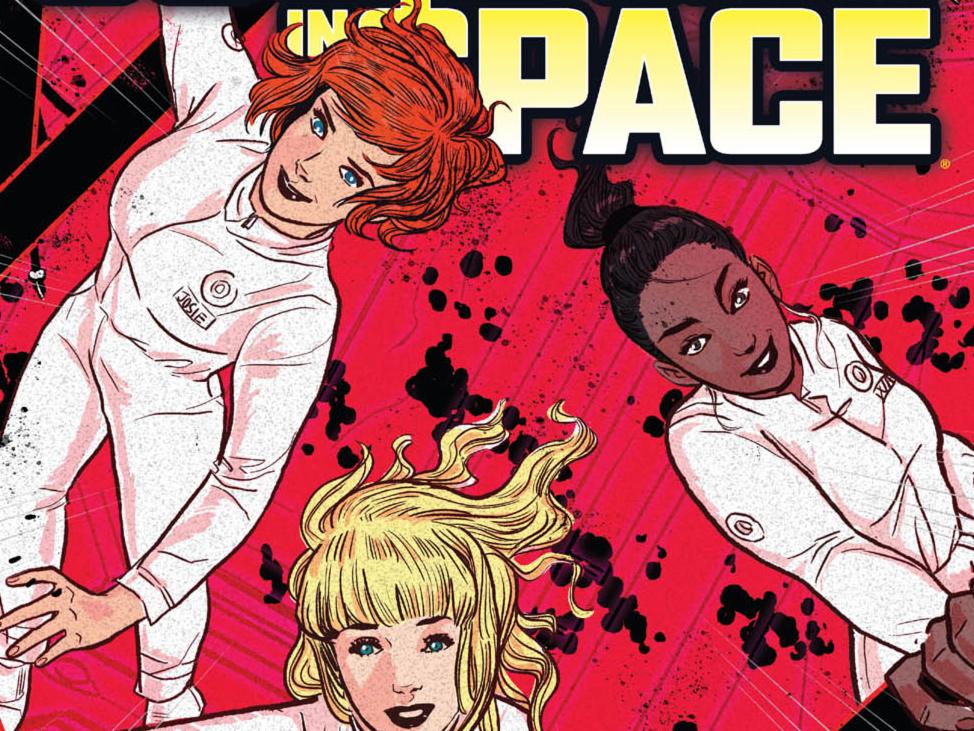 Josie and the Pussycats are back and they will boldly go where no band has gone before. They are on their greatest adventure as they rock out throughout the galaxy. With friendship, music, and space travel in style, what could go wrong? Surprisingly, plenty could go wrong and these girls are in for a wild ride. The Pussycats were last seen getting into cryogenic pods heading to the next stop on their tour.

Just before they left, Melody got a present from a big fan, but little did they know that this item was a symbiotic creature. As the band and some of the crew were in cryo-sleep, the symbiote began to explore the ship and absorb anyone it came in contact with. Now, Josie and the Pussycats wake up confused as ever. What will happen next? Jump aboard the Greendale and join us on a trip through Josie and the Pussycats in Space #2.

The second issue begins immediately after the last issue, the Pussycats and some of the crew have woken up; they are beginning to try to assess the state they are currently in. As everyone begins to discuss the matter at hand, Valerie and Josie find a way to open the exit with a guitar pick. With excitement, Josie wanders out first and suddenly comes into contact with the Corporal. A rush of fear hits everyone when he begins to act strangely towards them. Suddenly, Valerie notices the engines aren’t running. Just as they are going to investigate that issue, Captain Mayberry finds a window.

They all look out and discover that there are no stars outside and Melody begins to have an anxiety attack. As Josie calms Melody down, two of the guards with the group decide to explore the ship. During this time, Space Officers locate the Greendale, but believe it’s too late to save anyone. Back on the ship, however, the group decide to go to the bridge. They find the rest of the crew and everyone feels reassured. This is short-lived when they find out that the situation they are in gets a whole lot worse.

In many Archie Comics today they try to follow one continuity and not stray too far from the normal high school world — rarely do the comics stray away or do their own thing. Usually, many multiverse stories were contained in Archie Horror.

When Josie and the Pussycats in Space was announced it seemed like more of the same formula for this band on tour dealing with that and their own personal lives, but now in space. Surprisingly, that’s not the case for this series because of its pure horror. From cover to cover, issue to issue, the horror elements have not stopped. The last issue contained not only aliens but a killer symbiotic creature. Josie and the Pussycats in Space #2 was the same but they amped up the horror to a ten. Not only does this issue have a reanimated corpse, but it also has melting skeletons.

Josie and the Pussycats In Space Should Be Archie Horror

What is going on? Why would Archie Comics not put this under their horror line of comics? It has been written astonishingly so far, it contains high art, and it has a killer symbiote. It screams Archie Horror, it’s just confusing why Archie would keep this under the current regular logo. Could this be a part of the regular universe somehow? Hopefully, not only to make this cannon but with the characters, it would be terrifying. If this is a whole different universe it is great because it will leave the readers guessing on who will survive. If this is apart of the regular universe, everyone may survive and everything will go back to the status quo. Hopefully, this series doesn’t do that because there is so much potential. Maybe someday there will be an answer to why this isn’t attached to the horror brand.

Panicking In Space In Josie and the Pussycats in Space #2

In this issue, readers get to see another side of Melody. As she is ordinarily the upbeat girl of the group, it’s a surprise to see her breakdown. Not only by showing how scared she is but by how she has anxiety as well. As she panics through the issue, it’s a shocker to see her have a full panic attack near the end. It’s understandable that she would panic in a situation like this, but this issue makes it seem like this has happened before.

After a moment of terror, Josie sits Melody down and tells her to list the things she smells. This may be an unusual thing to ask, but, in reality, this is a method used to help individuals through an anxiety attack. It’s a way of grounding the individual when they are in flight or fight mode and cannot think straight. It’s a marvelous addition to see this added to a character like Melody. Many think anxiety can only hit certain kinds of people, but this shows that even someone as upbeat as Melody could suffer from anxiety just like anyone else.

The One Issue With The Panic Attack Scene

There is just one con about this addition in the comic.

As the group reaches the bridge, Melody is back to her upbeat self. It’s a bit fragmentary because normally after a panic attack emotions don’t just flip so quickly. The comic added this remarkable character trait and then cut the moment to further the story. Melody mentions she smells death, that’s right, death. This issue then goes to the next scene not even addressing what she just said. Now she’s hungry, and everyone thinks that is just funny Melody. She smelled death! Anyway, hopefully, the next issue explores Melody’s anxiety a bit more and doesn’t ignore it.

Why You Should Read Josie and the Pussycats in Space #2

Josie and the Pussycats in Space #2 is a fabulous issue with fabulous art to match and should be apart of your Comixology collection. Who knew that a book about a rock and roll band in space could be so enticing? I feel that this book could go so much farther if it was under the horror line (and it would reach a bigger audience). There are numerous fans that are only fans of the Archie Horror because of its more mature content. When seeing the conventional logo many put exceptional stories to the side, which they shouldn’t because they will miss series like Josie and the Pussycats in Space. I was glad to see that the writer included a moment featuring anxiety. It comes out of the blue, but it was written well and feels like they understand anxiety very well.

As I wish it could have gone a little longer, I hope it goes somewhere and is not just something in this issue that goes nowhere. Also, she smells death! Someone needs to address that. Yes, it could be just a figure of speech, but there could be so much meaning under that in which the writer could explore.

Maybe she has a link to the alien because she touched the form it took. It would be amazing to add that kind of twist in a story like this. This review could go on and on, but it’s best if you experience the series for yourself. Josie and the Pussycats in Space #2 is a wonderful addition and a must-read for all Archie fans. Until next time, let’s hope the pussycats can survive another issue on this deadly adventure through space.