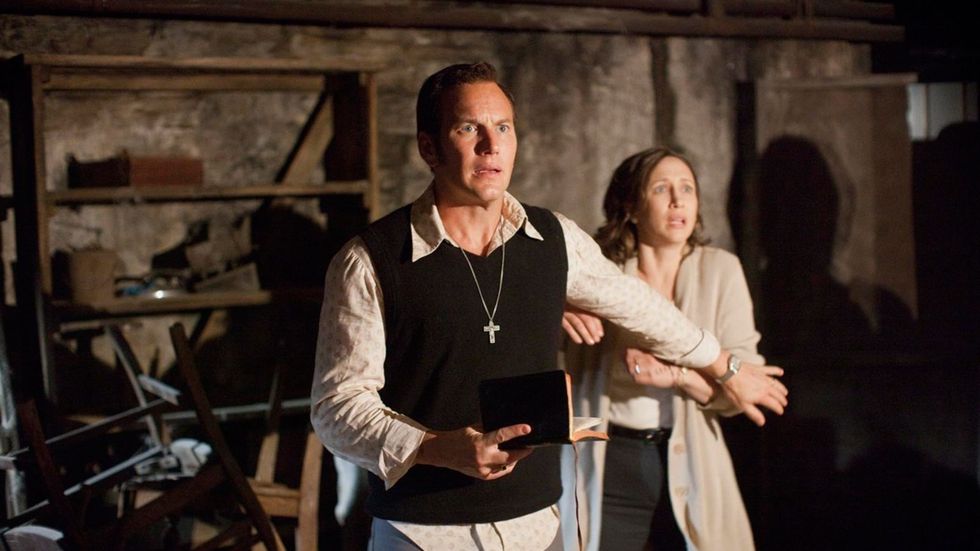 Why Do We Love The Fear Of The Unknown?

With Halloween quickly approaching, horror fans are catching up on the latest and greatest that horror movies have to offer, but what makes some of these villains so terrifying? The Conjuring, Paranormal Activity, Halloween (1978), and The Strangers all have something in common: The fear of the unknown. We develop this fear when we see unmotivated attacks or paranormal incidents towards people like us (the everyday people) because it causes us to feel uncomfortable.

We believe it is because you cannot properly protect yourself from an unknown cause or something you can’t see coming. An example of this is in the first scene of Jurassic Park when the velociraptors attack a worker through a cage-door opening. We could only view glimpses and hear the dinosaur from another angle. This leads us to become interested because we only see glimpses of the antagonist and not the full picture.

When Something Is Watching you…

When you take a look at paranormal or supernatural films they do not expose the demon until the end and that is if they even show it’s true form. A great example is The Last Exorcism. It shows you a depiction of the demon that is possibly possessing the protagonist towards the end of the movie. The Autopsy of Jane Doe shows a single experience with a witch that is paralyzed but you never learn how she got into that situation.

You likewise don’t know how she killed the father and son who were performing her autopsy. Even if you don’t believe in the paranormal, you know it can’t just be air causing all of these problems. In fact, the whole Final Destination franchise focuses on the fear of not knowing when death will finally come for you. Scary, isn’t it?

Paranormal movies have the ability to point to the shadows in your room and make you think that there may be something lurking in the dark. The paranormal brings together the fear of the dark and the fear of being alone. We think we watch these types of films because we are inquisitive people. We are uncertain if the paranormal is actually real, but something about it makes us believe it could be. And we are always on the lookout for something moving in our rooms.

That’s why shows like Ghost Hunters and Buzzfeed Unsolved are so popular. There are habits that we see in these films that stick with us for years to come. For example, I am 24 years old now and I still can’t sleep with one leg out of my blanket after watching Paranormal Activity 12 years ago!

Paranormal Activity has another paranormal villain that isn’t shown throughout the films. It only confirms that the girls (Katie and Kristi) named it Tobi, which wasn’t revealed until the third movie. In the first movie, footsteps and breathing from the demon are the only hard evidence. Other than that, the only other tangible evidence is the ritualistic drawings on the walls.

With this franchise having six films and one in the making, there has to be a reason everyone likes watching these adrenaline-pumping movies. Personally, I have only seen the first four which followed the two girls from the family though different moments in their life. The family appears to be average so the audience can’t help but connect with them. Watching what a demonic villain can do to a family much like your own can cause you to believe just a little more in the paranormal.

The Conjuring further follows this pattern when Ed and Lorraine Warren are performing an exorcism on a mother. This film does a great job of telling us rather than showing us the villain. Throughout the movie, the Warrens talk about the room in their house with different demons that are using objects as a means to possess people.

When describing the demon trying to possess the girls that own the Annabelle doll, the Warrens say it’s a demon that has never had a human form. This leads you to a path of picturing a demon in your own mind looking inhuman. Does it have hoofs? Does it have hair all over its body? or is it just like the cartoon devil in South Park?

Halloween (1978) has the biggest villain to get you in the Halloween mood. The children chanting, the masked killer, and the seventies dialogue (totally) are just a few minute characteristics of this film that make it a classic horror movie. Michael Myers killed his sister after she was supposed to be babysitting him instead of being with her boyfriend.

Fifteen years later, Laurie is targeted by him along with all of her friends. While there is no clear motivation other than the fact that they are babysitters. Laurie is the only person taking her responsibilities sincerely. Her friends were partying, but only one of them was babysitting and she dropped off her kid with Laurie. This leads to no logical explanation as to why Laurie is a target.

The Strangers is a movie with villains that are killing with no motive. Three people are stalking a broken-up couple as they proceed to kill them simply for fun. I frankly dislike watching this movie for that reason alone. They aren’t just a scary made-up boogeyman or a killer with superhuman abilities, they are just people.

People that found a home that they wanted to terrorize and murder the people inside with no reason why. The people they killed didn’t cause them harm in any way, they killed them because why not and that may be the scariest part about it, honestly.

The Differences In The Fear Of Villains…

Typically with horror movies, there is a clear motive behind the killer and the killing spree they are partaking in. Using Scream (1996) as an example, Billy’s motive is to kill Sidney because her mother broke up his parents’ marriage. In Friday the 13th (1980), Jason’s mom (Pamela Voorhees) kills the camp counselors because they are partying. While the children have not yet shown up to the camp, that doesn’t appear to matter to Ms. Voorhees.

The main reason her motive is different from Michael’s is that Jason drowns in the lake from the camp councilors’ negligence. Michael killed his sister because he didn’t have her attention, among other reasons that can’t be explained properly throughout the film series. As Above, So Below is a paranormal/supernatural movie that slightly goes against the typical storyline. The main characters are entering Hell and each person that was killed was shown how and why.

Usually, there doesn’t seem to be much of a personal reason as to why the character becomes possessed or stalked by a paranormal entity. While this is true, it does have the same type of feeling as Final Destination but it is not because they were supposed to die, it was because they possibly caused the death of others. This seems to have paranormal villains rather than death coming to finish the job.

Why Do We Fear The Unknown?

A killer with no motive or the paranormal aspect in a movie causing terror in the other characters’ lives is definitely the best villain in a horror movie. These types of villains bring out fear and the uncertainty of morality. The Purge franchise, 28 Days Later, World War Z, and the Scream franchise are frightening, but they all give the motive of the killer at some point in the movie.

When you take that away, you take away the ability to properly protect yourself. But the question remains… what’s behind your back?