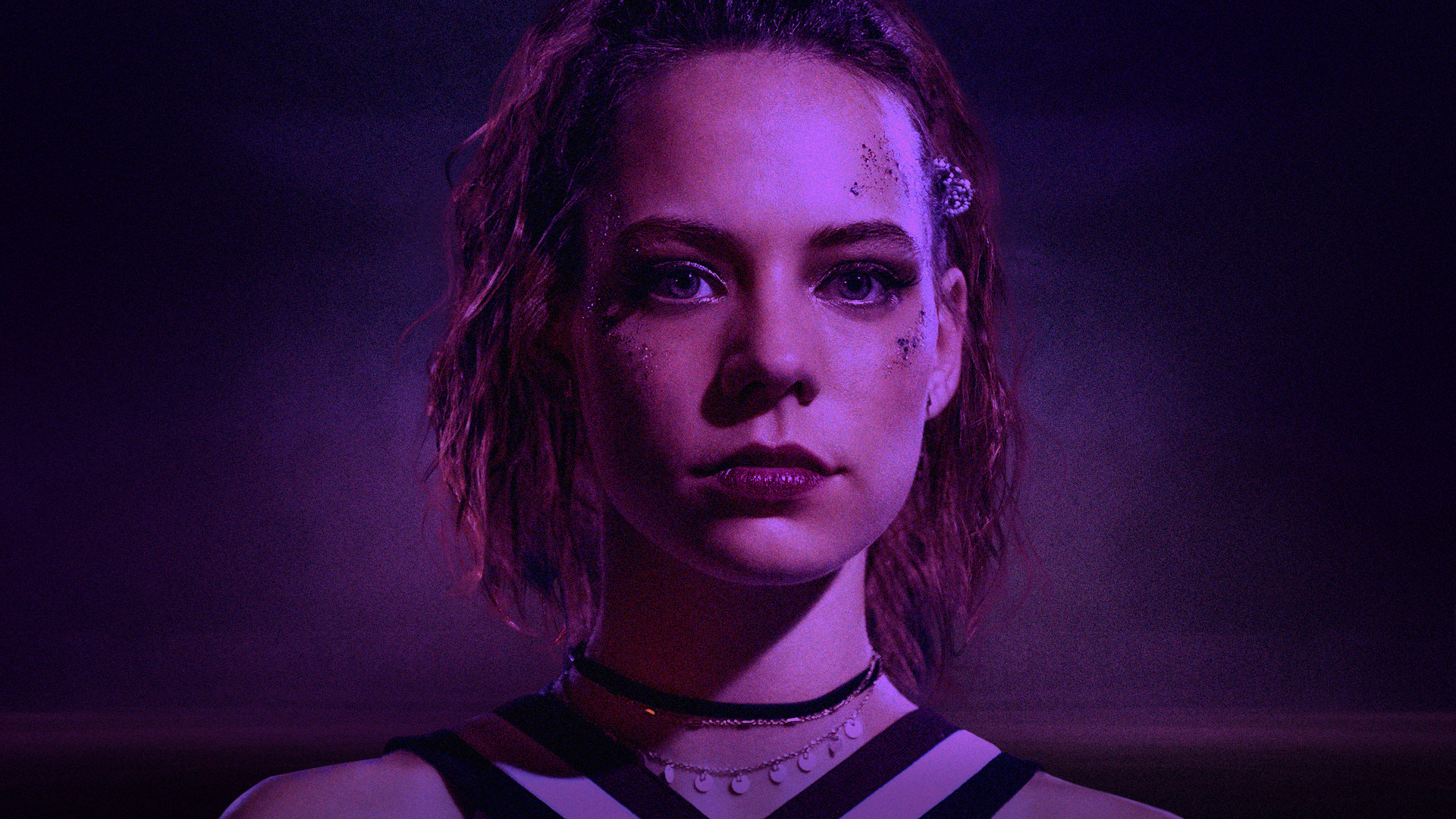 Who Is Dare Me’s Beth Cassidy?

What is it about the “mean girl” that keeps us interested? Is it because we can’t get enough of the drama that inevitably follows these characters? Series set within the high school scene have at least one mean girl, but it’s rare that we understand what influences them. USA Network’s Dare Me challenges the stereotype, unearthing a very complex, layered character in stereotypical mean girl Beth Cassidy.

“There’s something dangerous about the boredom of teenage girls.”

Based on the 2012 Megan Abbott novel of the same name, Dare Me explores the cutthroat, competitive world of high school cheerleading. The series centers on Addy Hanlon, best friend and second-in-command to queen bee Beth Cassidy. The arrival of new coach Colette French shakes up the dynamic and Beth, feeling Addy and the squad being pulled from her grasp, becomes desperate to keep control. But when a murder rocks their small community, loyalties will be tested, and their lives will be changed forever. Dare Me stars Marlo Kelly as Beth Cassidy, Herizen Guardiola as Addy Hanlon, Willa Fitzgerald as Coach Colette French, Paul Fitzgerald as Bert Cassidy, Tammy Blanchard as Lana Cassidy, and Alison Thornton as Tacy Cassidy.

The series dives deep into the lives of its three protagonists, but Beth, in particular, boasts something new. Through breaking down her experiences and relationships, I will demonstrate how, while her façade is all cruel and snarky remarks, she as a whole is a very complex character.

Beth Cassidy’s Strained Relationship With Her Family In Dare Me

Families tend to drive us crazy. It’s very rare that they’re perfect, but Beth has a particularly difficult time when it comes to her family drama. Her father, Bert Cassidy (Fitzgerald), had an affair with the woman who lived across the street, resulting in Beth’s half-sister Tacy Cassidy (Thornton). Beth’s mother, Lana Cassidy (Blanchard), kicked Bert out of the house, so he married Tacy’s mother. Caught in the middle, Beth lives with her addict mother, watching her father leave his new home and suffer alongside Tacy in the cheer squad. Though she never vocalizes it, Beth craves her father’s approval and can’t stand that he constantly lets her down.

The only time she sees him is to ask him for money or when he attends cheer performances. Beth and Tacy clash constantly during cheer practices. Tacy prefers psychological warfare, throwing their father’s praise in Beth’s face, while Beth prefers to upstage her on the mats. Their rivalry comes to a head when, after falling and causing Beth to injure her shoulder, Tacy is publicly challenged for an ice bath challenge against Beth. Dare Me isn’t afraid to showcase the nitty-gritty when it comes to these girls, as we see Tacy almost drown in the ensuing confrontation.

Beth simply shrugs off the cold, seemingly unaffected by the ice. She almost seems sorry for her actions as she offers her sweatshirt to Tacy, though she keeps her cool. It doesn’t excuse her actions, understanding Beth’s unstable family relationships give a glance beneath her hard exterior and challenges what viewers thought they already knew about her. She is attempting to protect herself, forced into a stoic existence by a disappointing father, an absent-minded mother, and a jealous sister. Beth masks her pain with cruelty.

Dare Me’s central theme is volatile female friendships. Beth and Addy have been friends since they were kids, showcasing the heavy implications of a lot of history. Like most friendships, they embody a power dynamic of sorts — Beth is the leader, Addy the follower. It was always that way. Until it wasn’t anymore. Beth finds relief in Addy – she relies on her for approval and acceptance. They live in their own world, but then comes Colette, who brings a new set of obstacles for them. Seeing her only genuine relationship faltering, it’s understandable that Beth begins to feel insecure and alone. She begins to act out in very public, sometimes dangerous, ways.

Addy’s ambition takes over as she is drawn to Colette. Beth recognizes this, expressing distrust for Colette’s motives.

“Addy, you’re a good person. You don’t know how it works. People like that… they’ll throw you away.”

In an interview with Us Magazine, Kelly breaks down their friendship as very symbiotic. “Beth, in a lot of ways, knows Addy so much more deeply than Addy knows herself,” Kelly explained. “And I think in exposing Addy to other people, she would also, potentially, really traumatize Addy in her own self-discovery and understanding. Which I don’t think she would ever want to do to her.”

Beth is always there for Addy. Addy, however, does not always return the favor. This pushes Beth to the brink, bringing out her darker side, and exposes the possessive nature of her feelings. Their rocky friendship often contributes to Beth’s outlandish behavior.

Around the middle of the season, Beth undergoes a very traumatic experience in which she is sexually assaulted by an older Marine at a party. Dare Me did an excellent job of depicting the aftermath while sparing explicit details. Addy finds Beth barely conscious in her car, mumbling incoherently. Beth doesn’t mention being assaulted, but we see scars in the mirror later that night. Beth hides tears from Addy as her phone is bombarded with texts from the Marine, unaware that anything was wrong. She tries to move on, but when there is an accident during the cheerleaders’ homecoming routine, Beth can’t keep from slipping into a full-on panic attack.

However, Beth refuses to talk about it. Addy presses her and Beth lies, assuring her nothing happened. Unfortunately, the assault ate away at her. We see everything come to a head as she wakes from a restless sleep, struggling to breathe. She goes for a run to clear her head, only to break down screaming in the middle of the street. It’s heartbreaking, watching her burst into tears as she’s barely able to stand.

Beth pushes through the pain and the trauma in order to move on from it. She tries to tell Addy what happened in very vague, dream-shrouded terms, but Addy is unable to decode her message. Beth is visibly let down by this, realizing that she truly is alone in dealing with it. Though Beth puts on her perfect, hard persona for everyone, the assault changes her. She becomes quieter at times and even more closed off from Addy and Coach French than she was before. She does have an encounter with her attacker towards the end of the season, but you’ll have to watch the series to see how it turns out!

Beth Cassidy Loses Control Of The Cheer Squad In Dare Me

Beth has always been in control. It was established very early on, as she ran practices and drills on her own terms, but her entire world was turned upside down by the arrival of Coach Colette French. The new coach was brought in by Beth’s father, her reputation as an award-winning coach preceding her. Beth is the only one unimpressed by her, shrugging her off and disrespecting her any chance she gets. But unlike the girls on the squad, Coach French doesn’t bend to the great Beth Cassidy. Instead, she turned them around on her by demoting her from the squad captain and giving Tacy her spot for the first football game.

This infuriates Beth, leaving her completely speechless. This can be interpreted simply as a mean, controlling girl getting what was coming to her, but if there’s anything Dare Me wants you to know, it’s that nothing is that simple. Cheer was Beth’s outlet – her kingdom, so to speak. To see that get ripped away from her really breaks something inside of her. In a way, it helps Beth realize that she will stop at nothing to regain that sense of control.

Should You Watch Dare Me?

Dare Me challenges all expectations of female friendships and power dynamics through this collection of complex characters. All episodes are now streaming on the USA Network in the US and on Netflix internationally. No announcement has been made about season two, so we’ll just have to cross our fingers!