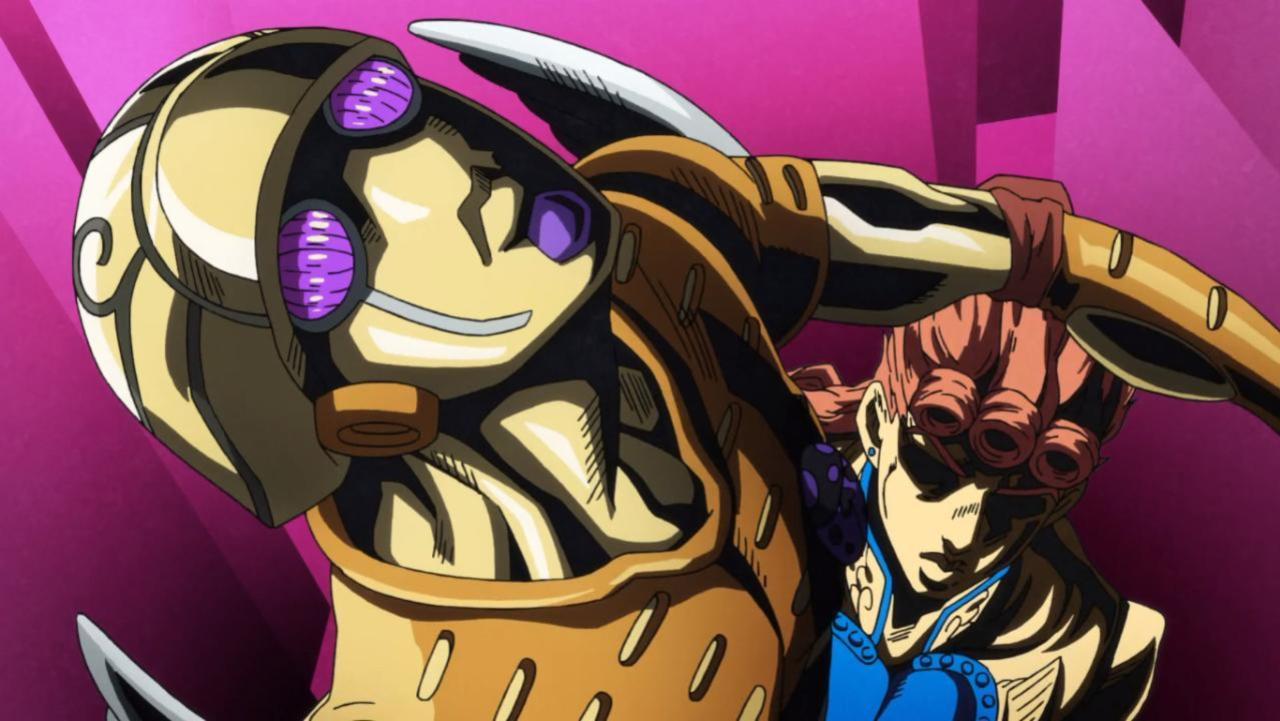 We have finally arrived at the most recent JJBA anime adaptation, JoJo’s Bizarre Adventure Part 5: Golden Wind. As of the release of this article, the anime is still airing (it’s on episode 16). Therefore, this article will serve as a mid-point overview of the series, introducing the plot and characters featured so far. (In the future, a full review of Part 5 will be released once the series officially concludes.)

JoJo’s Bizarre Adventure Part 5: Golden Wind by Hirohiko Araki serialized in Weekly Shounen Jump from 1995-1999. The manga accumulated 155 chapters which was compiled into 17 volumes. In 2018, David Productions adapted the manga into an anime. (As of the publication of this article, JoJo’s Bizarre Adventure Part 5: Golden Wind is still airing.) The adaptation will receive 39 episodes.

Giorno is a petty thief who meets Part 4’s Koichi Hirose, who Jotaro sent to Italy to determine whether or not JoJo was a threat due to his lineage. Koichi, at first, has a hard time determining whether or not Giorno is a threat. For, despite his bloodline and “profession,” JoJo appears to have a good heart.

JoJo reveals that he wants to become a “gang star,” or a mob boss, so he can end the drug trafficking in his community. He also wishes to use his ties as a “gang star” to support his community financially. An opportunity to accomplish his dream appears when he meets Bruno Buccellati, a gang member of the group, Passione.

After a quick battle, JoJo and Buccellati discover they both have similar aspirations and band together to overthrow Passione’s current boss. However, in order to accomplish this, the two must rise in the gang’s ranks and gain the boss’ trust.

When Giorno officially becomes a Passione member, he, Buccellati, and their team receive their first mission, guarding the boss’ daughter, Trish Una. While seemingly simple enough, this mission proves itself difficult as enemies attempt to kidnap her to gain information on her father.

Will the new Team JoJo be able to protect Trish, overthrow the boss, and accomplish their dreams of creating a better community?

Since JoJo’s Bizarre Adventure Part 5: Golden Wind is half-way through airing, this section will only cover the newest members of Team JoJo.

Giorno Giovanna is the “son” of Dio Brando, as well as the fifth JoJo. (Dio conceived Giorno while he had Jonathan’s body, meaning, technically, he is a Joestar.) Giorno’s mother is a Japanese woman who somehow survived her encounter with Dio. She gave birth to Giorno (whose original name was Haruno Shiobana) in Japan.

Eventually, Giorno’s mother married an Italian man and they moved to Italy. Giorno’s stepfather would beat him and Italian society ostracized Giorno. However, this changed when he saved an injured gang member’s life. Because he saved him, this gang member ensured the community treated Giorno with respect. It was then that Giorno decided to become a gang member.

When he meets Bruno Buccellati, a gang member of Passione, he realizes that they both share a similar dream. JoJo joins Passione in order to ascend the ranks and overthrow the boss to become a “gang star.” Along the way, JoJo and his team receive an order to protect the boss’ daughter, Trish Una, from all impending threats. This job becomes increasingly difficult as forces attempt to kidnap her to get closer to her father.

Giorno’s Stand goes by the name Gold Experience. It has the ability to give life to objects. For example, JoJo can make a brick into a snake. However, if anyone damages these beings, instead of it injuring Giorno, it would injure them. Also, if Gold Experience hits a living thing, it causes their senses to go haywire.

Bruno Buccellati is a gang member of the group, Passione. He first meets JoJo as an enemy as he interrogates him over the death of a colleague. However, when the two realize that they have similar dreams (wanting to use the gang to improve their communities), they become comrades.

Buccellati is the commander of his five-an squad (excluding him). His team respects him as he was the one to give them opportunities to better themselves. Along with his team, Buccellati’s community also admires him as he maintains order. He is a natural-born leader as he cares deeply for his team, constantly putting himself in danger to ensure their safety and the success of their missions.

His Stand, Sticky Fingers, has the ability to create zippers with its touch. For example: if Buccellati wanted to get into a building, his stand can create a zipper on the wall. Then, he can open the zipper which garners him access into the building. His Stand also works on animate objects, like people (including Buccellati himself). Through this, he can take people apart or swamp their body parts. Sticky Fingers can hide objects inside the dimension opened by his zipper as well.

Leone Abbacchio is a member of Passione and Buccellati’s squad. He was originally a police officer which was his dream career. Sadly, Abbacchio quickly discovered how disrespected the police were. The constant hatred from civilians led him to become a dirty cop. He would take bribes and turn the other way whenever a crime occurred. However, this decision eventually ruined his career.

While investigating a crime, Abbacchio found out a criminal he let go murdered someone. The criminal threatened to report Abbacchio for taking bribes if he did not look the other way again. Just as Abbacchio planned to do so, a fellow officer startled the criminal who shot at them. This killed Abbacchio’s partner. After this, Abbacchio went to jail for being a crooked cop, but, once out, he met Buccellati who gave him another chance at life.

His Stand, Moody Blues, gives him the ability to “replay” a person’s past. His Stand transforms into the person and then, depending on how many minutes Abbacchio dictates, replays everything the person did up until that point. The downside to this is while it is transformed, Moody Blues cannot attack anyone.

Guido Mista is another member of Buccellati’s squad and Passione. He is a superstitious individual who hates the number four as he sees it as an unlucky number.

In his past, he saved a woman from rape by a group of men. While all the men shot at him, none of their bullets hit. However, when Mista shot back, all his bullets landed dead-on. Sometime after this event, he meets Buccellati who invites him to join his team.

His main weapon of choice is a gun which he pairs with his Stand, Sex Pistols. His Stand are six, bullet-shaped beings who control the trajectory of his bullets.

Narancia Ghirga is a member of Buccellati’s squad and Passione. When he was young, his mother died of an illness. His father barely showed any concern for his son which pushed Narancia to the streets.

He looked up to a thug who framed Narancia for a crime he did not commit to save himself. Once released from jail, Narancia met Fugo, another Passione member, who brought him to Buccellati. The two showed Narancia a kindness he never experienced which led him to join Passione.

His Stand goes by the name Aerosmith. It is an airplane-shaped Stand which uses machine guns to shoot people and launches bombs as well. Narancia’s Stand provides him with radar which he uses to detect enemies. The downside is that the radar detects only people’s breathing which inhibits Narancia when there is a crowd.

Fugo Pannacotta is a member of Passione and the first recruit of Buccellati’s group. Unlike his groupmates, Fugo grew up in a life of privilege. He was a child prodigy with a high I.Q. which allowed him entry into a university at 13 years old. Unfortunately, this gift garnered him too much pressure from his parents. The stress they put him under made him develop an uncontrollable rage.

While at university, a professor attempted to molest Fugo which finally made him snap. He beat his professor senseless with an encyclopedia and after his parents ensured he would avoid jail time, they disowned him.

After spending time on the streets, Fugo met Buccellati who recruited him for a group he wanted to form. Since that time, Fugo developed a close friendship with his team, especially with Narancia, who he treats like a younger brother. He often tutors Narancia (since he did not receive anything higher than an elementary-school-level education). However, when Fugo loses his patience, he flies into fits of rage and beats him during their sessions.

His Stand, Purple Haze, is a dangerous Stand since its knuckles have cartridges on them which carry a virus. Once its hands punch something, the virus releases and everything in its immediate surroundings (regardless if friend or foe) dies. It is for this reason, Fugo rarely releases his Stand unless absolutely necessary.

Trish Una is the daughter of Passione’s mob boss. She lived with her mother her entire life without ever meeting her father. However, when her mother passes away, her father acquires Trish and places her under Buccellati’s watch. His team must deliver her safely to her father before rivals kidnap her to gather information over her father’s true identity. (Something no one, not even Trish, knows.)

She portrays herself as very spoiled, often ordering Buccellati’s team to run errands for her. However, Trish exhibits the potential to protect herself with self-defense techniques she displays.