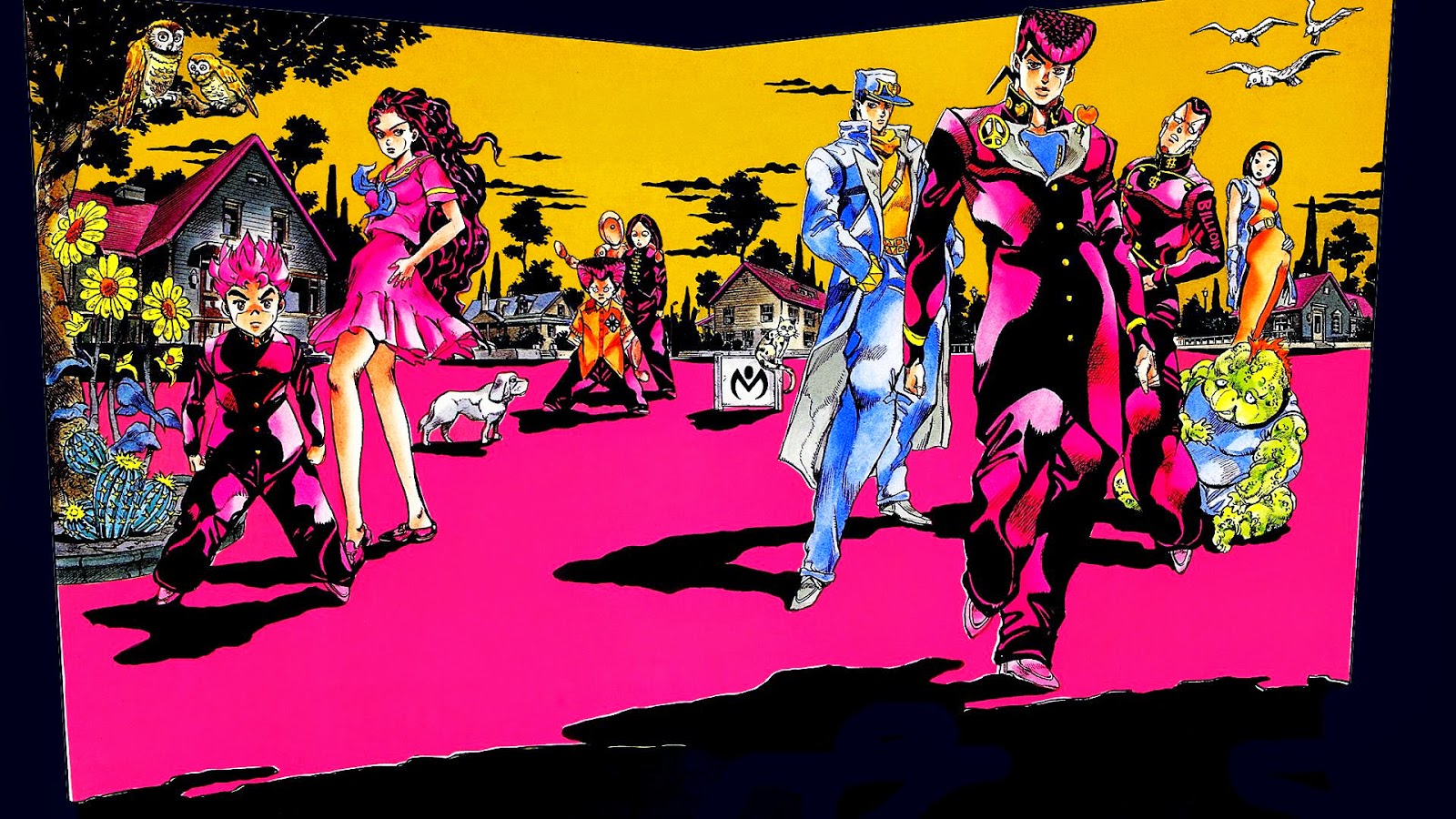 Who Are The JoJos?: JoJo’s Bizarre Adventure Part 4: Diamond Is Unbreakable Review

What did you say about my hair?! I mean… the next installment of the JJBA article series is here for JoJo’s Bizarre Adventure Part 4: Diamond Is Unbreakable.

JoJo’s Bizarre Adventure Part 4: Diamond Is Unbreakable ran in Weekly Shounen Jump from 1992 to 1995. Hirohiko Araki wrote and illustrated 174 chapters for Part 4 which later collected 18 volumes. In 2016, David Productions adapted the series into an anime. It had a total of 39 episodes and followed the fourth JoJo, Josuke Higashikata.

Taking place in 1999, 12 years after Stardust Crusaders, JoJo’s Bizarre Adventure Part 4: Diamond Is Unbreakable follows the fourth JoJo, Josuke Higashikata (JoJo). Josuke is the illegitimate child of the second JoJo, Joseph Joestar. He lives with his mother and grandfather in the town of Morioh, Japan.

On his first day of high school, Josuke meets Jotaro Kujo (the third JoJo). Jotaro goes to Morioh to find JoJo in order to tell him about the potential inheritance he will be receiving. (Joseph knew nothing about Josuke’s existence up until this point.) Josuke assures Jotaro that neither he nor his mother need the Joestars’ support and asks Jotaro to tell Joseph not to worry. However, Jotaro does not leave right away as he has another reason for being in Morioh.

Jotaro hears news about an ancient bow and arrow being used to turn people into Stand users. (This bow and arrow happen to be the one used on Dio in Stardust Crusaders to awaken his Stand.) Jotaro asks JoJo and his friends to assist in tracking down the items and their users.

However, while searching for the bow and arrow, Team JoJo unearth Morioh’s mysterious, dark secret. This mystery regards the staggering number of disappearances in the town over the span of 15 years. With the creation of Stand users, civilian disappearances, and the unknown assailant running loose, JoJo must fight hard with his friends to keep the people of Morioh safe.

Despite the quantity of characters in JoJo’s Bizarre Adventure Part 4: Diamond Is Unbreakable, this section will only cover the main players.

Josuke Higashikata is the fourth JoJo and illegitimate son of Part 2’s JoJo, Joseph Joestar. He lives with his mother and grandfather in Morioh, Japan. JoJo is a high school student who grew up without his father (who didn’t know he existed). On his first day of high school, JoJo meets his nephew, Jotaro Kujo. Jotaro was there to talk to JoJo about his inheritance, which he refuses. JoJo understands the harm his existence causes the Joestar family, so he wishes to be in as little trouble as possible. Surprised by his response, Jotaro reveals another reason for his visit. He heard rumors of an escaped convict being in Morioh who happens to be a Stand user. This convict got shot with a bow and arrow which can awaken people’s Stands. Jotaro asks JoJo for assistance in capturing this criminal, but he refuses.

Unbeknownst to JoJo, this criminal has a connection to his family. JoJo’s grandfather, who is a police officer, arrested this man, and he escaped jail seeking revenge. Unfortunately, the convict kills JoJo’s grandfather and while JoJo avenges his murder, he decides to protect Morioh in his place. Therefore, JoJo joins Jotaro’s mission in finding the bow and arrow to stop the chaos.

During Stardust Crusaders, JoJo also suffered from his Stand slowly killing him like his half-sister, Holly. He managed to survive, and this event awakened his Stand. JoJo’s Stand goes by the name Crazy Diamond. Its ability allows JoJo to heal injuries (not his own) and repair objects. Crazy Diamond can also modify items. (For example: JoJo could destroy a sidewalk and use his stand to make the concrete into a wall for defense.)

Koichi Hirose is a high school freshman who meets JoJo on his first day of school. The two quickly become friends and allies in the fight against the possessor of the bow and arrow. While originally a normal student, Koichi encounters Keichou Nijimura (the first owner of the bow and arrow) who shoots him and awakens his Stand.

Before receiving his Stand, Koichi was a meek boy who, despite being fearful, would gather his courage to help others. However, as the series moves forward, he gains confidence and strength along with his Stand. He becomes a reliable ally willing to put himself in danger to protect the innocent and his friends. He earns the respect and trust from allies (like Jotaro) and enemies-turned-allies alike.

Koichi’s Stand goes by the name Echoes. It is a Stand capable of talking and evolving. Originally, the Stand comes out as an egg which later hatches into a lizard-like Stand. While in its Act-1 and Act-2 modes, his Stand gives him the power to write out and create sound effects. (For example: if Koichi writes out the sound effect of a siren then people will hear one.) It eventually levels up again into a humanoid-shape Stand which freezes its opponents through increasing gravity.

Originally an enemy, Okuyasu Nijimura worked with his brother, Keichou, who was the first user of the bow and arrow. Okuyasu’s brother would shoot people with the arrow, including Okuyasu, to awaken their Stands. Their reason for doing this was to create a Stand user to kill their father. The Nijimura brothers’ father worked for Dio and had a flesh bud inserted into his brain. When Dio died, the bud began to form within his body, disfiguring and making him immortal in the process. Okuyasu and his brother tried to create a Stand user powerful enough to kill their father to end his suffering.

dies at the hands of another Stand user who steals the bow and arrow. After his brother’s death, Okuyasu befriends JoJo who saves his life after Keichou injured him. The two form a genuine friendship, and Okuyasu assists JoJo in his search for a bow and arrow. (He also develops a need to avenge his brother’s death.) His Stand goes by the name, The Hand. Using its right hand, Okuyasu’s Stand can erase space and material objects by swiping down.

(No one knows exactly where the objects swiped away go.) The open space left by his Stand closes up immediately so it looks as if nothing has disappeared. The series makes clear that The Hand has the potential to be one of the most powerful Stands. However, due to Okuyasu’s lack of intellect in utilizing The Hand, this most likely won’t happen.

12 years after Stardust Crusaders, Jotaro Kujo arrives in Morioh searching for Josuke Higashikata. He learns of his grandfather’s illegitimate son and delivers the news to him about his potential inheritance. However, after JoJo graciously rejects the offer, Jotaro reveals his other reason for coming to Morioh. He arrives there after learning that the bow and arrow used to awaken Dio’s Stand is in JoJo’s town. He asks for JoJo’s assistance in tracking down the items in order to avoid innocent people getting hurt.

While Team JoJo searches for a bow and arrow, the team also uncovers a 15-year-old mystery. This mystery involves a large number of disappearances within the town with no resolved cases. Jotaro uses his connections with the Speedwagon Foundation to discover a potential Stand user’s connection to these disappearances. Throughout the series, Jotaro serves as the backup for Team JoJo, providing them with information and resources. He also works as a mentor for JoJo.

While introduced halfway through the series, Yoshikage Kira serves as a major antagonist within JoJo’s Bizarre Adventure Part 4: Diamond is Unbreakable. He is the third main antagonist introduced within the series. Kira is a normal office worker and bachelor by day. However, at night, he is the serial killer involved with the disappearances of Morioh citizens for over 15 years. Yoshikage Kira mainly targets young women and keeps their hands since he admires them. He treats each hand as if she is his new girlfriend in his life. When the hand starts to decay, he tosses it away and kills another woman, essentially moving on to a new “relationship”.

As redundant as it may seem, Kira wishes to live a quiet life and attempts not to draw too much attention to himself. He obtains a Stand called Killer Queen which gives him the ability to make anything or anyone a bomb. This is how he is able to destroy any evidence of a body as it blows up and disintegrates into nothing. Killer Queen also comes with a detachable appliance that works as a tracker bomb, seeking its opponents until it blows them up. Kira is a formidable opponent capable of going through any means necessary to ensure his survival and maintain his peaceful life.

The unique power source of this season is the bow and arrow. This item serves as an explanation as to how Stands came to be in Stardust Crusaders (at least for the Joestars).

The Bow And Arrow

The bow and arrow was originally in the hands of Enyaba (a henchwoman of Dio’s) in Stardust Crusaders. She used this bow and arrow on Dio which awakened his Stand, The World. This weapon also assisted in creating Dio’s stand-user henchmen very quickly. By using it on Dio, who had possession of Jonathan’s body, this awakening transferred to everyone with the Joestar bloodline. After her death, someone stole the items and began using them on civilians in Morioh, Japan.

The first user of the bow and arrow introduced in JoJo’s Bizarre Adventure Part 4: Diamond Is Unbreakable was Keichou Nijimura. The initial major threat in Part 4, he killed many people in the process of trying to create a Stand user capable of killing his father. However, after dying, the bow and arrow transfer to the second major antagonist in the series. (Eventually, there is a revelation of possible copies of the bow and arrow available.)

When someone gets hit with the arrow, there is a 50/50 chance their Stand will develop. Depending on the person’s aptitude, they either gain a Stand or die in the process. This is the main reason Team JoJo wishes to confiscate the items as to prevent casualties.

Why You Should Watch JoJo’s Bizarre Adventure Part 4: Diamond Is Unbreakable

JoJo’s Bizarre Adventure Part 4: Diamond Is Unbreakable is a unique series. Its colorful animation is by far the most psychedelic of the franchise. However, in contrast to its colorful backgrounds, Part 4 showcases some of Hirohiko Araki’s darkest work. Unlike in previous series, JJBA Part 4 does not have just one main antagonist. This fact differs drastically from its predecessors. (Phantom Blood just had Dio; Battle Tendency had the Pillarmen; Stardust Crusaders had Dio again.) While each season had interesting henchmen that their pertaining JoJo would face, this one tweaks that trope.

Diamond Is Unbreakable introduces an abundance of enemy-turned-ally characters. Unlike previous seasons, where former enemies were under mind control or developed mutual respect for their JoJo on the battlefield, Part 4 shows enemy Stand users genuinely redeemed. They served as obstacles for selfish reasons but chose to change once defeated. The sight of these characters receiving a human dimension is refreshing. This works tremendously well when taking into account the personality of Part 4’s JoJo.

Josuke is a perfect mix of all the previous JoJos: he has Jonathan’s kindness, Joseph’s craftiness, and Jotaro’s fighting spirit. His ability to give people the opportunity to better themselves is what makes this series. It shows that he is upholding his grandfather’s will in wanting to make Morioh a better place. These unique changes to the franchise alone will make Part 4 a real treat for all JoJo fans.

JoJo’s Bizarre Adventure Part 4: Diamond Is Unbreakable is available to watch on Crunchyroll and Hulu. To pre-order vol. 1 of the manga, visit Rightstuf, Barnes and Noble, and Amazon. For more Animanga analyses, click here.