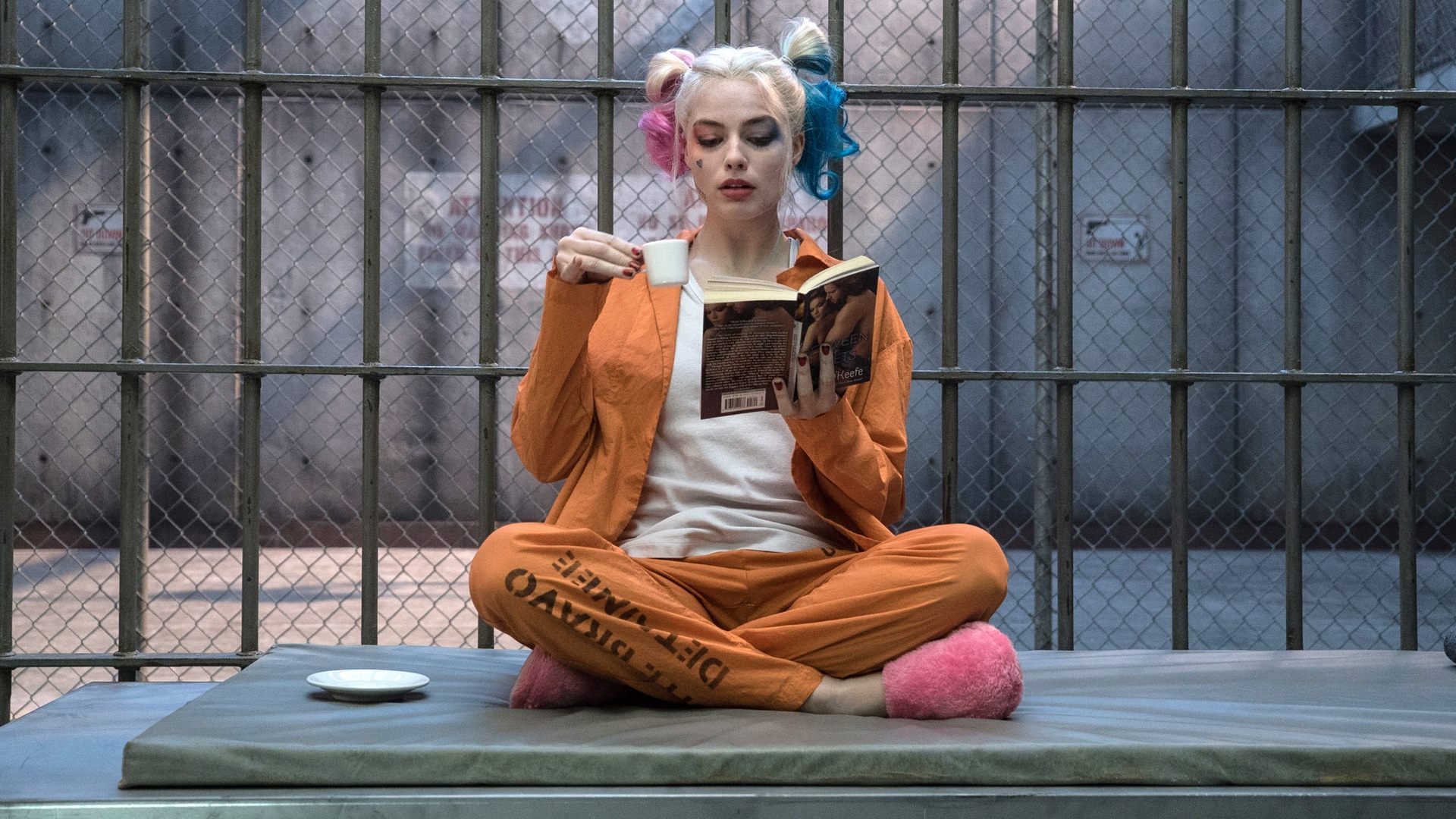 Where Can Harley Quinn Go From Here In The DCEU?

Since her first appearance, Dr. Harleen Quinzel (Harley Quinn) has been a fan favorite, sneaking her way into every facet of geek culture. Cartoons? She was born from them. Comics? She was the queen. Video games? Boom, you got Quinn. Bishoujo figure? A couple of different ones, yes. But as time goes on, there has been a certain shift in her character. With a rising hemline here and a bizarre night with Dick Grayson there, we’ve got ourselves a modern sex symbol.

From the start, Harley has always been a victim of the fetishes of whoever is writing her. However, with the upcoming Birds of Prey film, Harley is in a comfortable position to flourish as a character as opposed to a blow-up doll. You could have clicked on any Harley Quinn article, but you chose this one. So strap in and let’s talk about the most pressing issue of our day:

How did Harley Quinn get here? Where can she go from here?

Let’s Start With What You Know

Harley Quinn first appears in the 1992 episode of Batman: The Animated Series, The Joker’s Favor written by Paul Dini and directed by Boyd Kirkland. Paul Dini and series developer/horniest man in comics Bruce Timm created everyone’s favorite little spitfire. Though originally a one-off character inspired by voice actress Arleen Sorkin, Harley became a BatFam staple. Her appeal was partly because of her fun personality, but also in part due to her sensuality.

For instance, in Mad Love, the first pass at Harley’s origin story, Harley gets into Gotham U on a gymnastic scholarship. She then proceeds to sleep her way to the top of her class. For obvious reasons, the cartoon episode inspired by the comic cuts this plot point. This story also shows Harley stubbornly trying to romance the Joker, in a scene that has more or less become the lens through which the world views Harley; a lovestruck girl in a sexy nightie getting thrown out on her rear.

In fact, many fans to this day ignore the tragic ending of Mad Love. A broken Harley laments that it’s “her fault” that the man she loves so dearly tossed her out of a window. (Side note, this scene features Renée Montoya. She’s another character who originated in the Animated Series, has stuck around since, even starring in Birds of Prey. She doesn’t get nearly enough attention.)

Sugar, Spice, & Everything Nuts: The Ingredients Of Modern Harley Quinn

In the episode’s dénouement, Harley proclaims that she is done with the Joker, that she’ll never go back, but a single gesture of affection in the form of a flower and note in her hospital room pulls her right back in. Keep in mind that this is the couple that adorns thousands of tweens’ hot topic tee-shirts. So if we were judging a cat show, this Harley is the breed standard. The Harley to which we compare all others. A funny, witty character with a flawed love for a madman, a deep friendship with fellow villainess Poison Ivy, and surprisingly easy-to-find smut drawn by Bruce Timm. She’s not at all divorced from her sexuality, but with a family-friendly show, you can only show so much.

Fast forward to 1998. Titanic won the Oscar for Best Picture. Baby One More Time was unleashed upon the world. And Batman + Batgirl: Thrillkiller ’62 is put on the shelves. This comic is a mostly forgotten Elseworlds story but serves an important role in what I’m dubbing . Thrillkiller ’62 introduces us to Bianca Steeplechase, a female Joker who I would KILL to have ed to modern comics. Alongside her is her lover Hayley Fitzpatrick in a very familiar red and black ensemble. While you won’t find this comic brought up in a lot of discussions, it becomes essential reading as the origin of Harley’s life as a bisexual superstar. While modern writers delve deeper into Harley’s sexuality through her relationship with Poison Ivy, this is Harley’s Big Gay Origin Story (trademark pending).

Take two big steps with me. We’re in 2009. Lady Gaga just released Bad Romance. Obama is president. And Batman: Arkham Asylum for the PS3 and Xbox 360 hits shelves to worldwide acclaim. Dropping just a year after Christopher Nolan’s Dark Knight, Arkham Asylum cemented modern Batman as an adult license, one that took place in a dark world with twisted minds shaping the narrative. Oh, and Harley Quinn is a sexy nurse now.

See what I mean by her look being defined by fetishes? While Harley is shown to be competent and powerful in her own right, her thigh-high fishnets and leather corset attracted a very particular type of fan. So as the Arkham series goes on Harley stays corseted, stays sexy, and even gets tied up and gagged at some point. Consequently, modern Harley Quinn is birthed: a strange, goth version of the Manic Pixie Dream Girl. A Literally Manic Clown Nightmare Girl (again, trademark pending). This should be familiar to anyone who’s seen Suicide Squad.

What Does That Mean, Exactly?

So what is all of this in service of? What does it MEAN? Well, the answer is absurdly simple and overwhelmingly frustrating. The Male Gaze. I probably lost a lot of you with that one. To those souls brave enough not to exit out of this article, hey welcome to my Harley Quinn TED talk. First and foremost, let’s define the Male Gaze. Laura Mulvey coined the term in her 1975 essay Visual Pleasure and Narrative Cinema. While her essay strictly focuses on film, the term has been applied across media. Mulvey writes,

Here we have the dichotomy of the Male Gaze; a woman who is sexual within the story for the benefit or detriment of the characters in her diegesis, and a woman who is sexual for the benefit of the audience. Note that here, the “male” gaze doesn’t necessarily refer to men but denotes the audience. So no, I’m not coming for all men here (not ‘til after the third date). This is just the terminology we use. Comics abound with characters who represent both sides of the Male Gaze. For example, Mystique perhaps poses sexually and enticingly for the benefit of the character she’s seducing, but just as much for the reader.

Where Harley Quinn is concerned, I draw the line when her sexuality ceases to be for the story and becomes entirely audience-focused. Look no further than Suicide Squad #14, where Harley remains brutally hanged via but positioned for the titillation of the reader. Her pose is tall, modelesque, and her breasts threaten to leap out of her top.

Granted, that was the perpetual state of her boobs in this run, but I digress. Time and time again, DC plays Harley’s suffering for fanservice. Remember the Break into Comics with Harley Quinn contest? That is where publishers asked artists to draw Harley in a bathtub prepared to commit suicide? That should be enough to prove my point.

The Opposite Of The Male Gaze = The Female Gaze

On the other hand, the Female Gaze is a bit trickier to define. The term has only come into use very recently and has mostly remained adopted in a queer context. Typically the Female Gaze describes women made to appeal specifically to other women. I would argue that if we’re going to call this phenomenon the Female Gaze, it should be set in direct opposition to the Male Gaze.

The Male Gaze frames a woman as sexually appealing to the audience before human, see Harley Quinn in Suicide Squad. Therefore, the Female Gaze sees the woman as a character first, see Harley Quinn in the teaser for Birds of Prey. While it’s unfair to compare an entire movie to a few frames in a teaser trailer, judging from costume design and framing alone we see a marked improvement. Harley is surrounded by other women, all put in positions of power by the camera.

She doesn’t gaze passively at the viewer like a pin-up model. She dances freely and looks straight into the camera with the determination of a leading lady. This Harley is not traditionally appealing. Sure, she’s Margot Robbie, but she’s dressed like an art student at a weekend-long concert. Add to this Robbie’s own expression of distaste at Harley’s current framing and her renaming the script Birds of Prey (and the Fantabulous Emancipation of one Harley Quinn).

Where Do We Go from Here?

I was born after the premiere of The Joker’s Favor, in a post-Harley world. There is SO MUCH Harley content I could have covered here. I could go into the fact the programming and material marketed towards a younger demographic tends to paint Harley in a much more human light since they can’t rely on her sexuality in The Lego Batman Movie. I’d love to talk more on Harley’s narrative as a bisexual woman – as well as queer-coding of villains in general. Also, there’s a picture from the Birds of Prey set of Harley in an exotic pets shop and if that means that Bud and Lou are going to be in this movie I will have an actual conniption! But like I said, clarity. So what do I want to see from Harley in the future? For one, I like the direction the modern comics and games have taken.

What Was This All For?

For example, the choice to focus on an independent Harley Quinn, out of her relationship with her Puddin’ is a smart one, as it lets us examine her character free from the threat of intimate violence. But I don’t like the idea of completely ignoring their past relationship. Conner and Palmiotti’s Harley shines when she’s directly confronted by the Joker and has to respond in kind.

Consistently, she shows herself to be above his influence and unafraid to send him packing. I, on the other hand, tend to lean more towards the narrative of slowly overcoming abuse and dealing with an internal struggle, but that may be a bit too obtuse for where her character is right now. Injustice 2 handled this concept fairly well, with Harley momentarily falling back into the Joker’s clutches and fighting her way out. And subsequently beating the snot out of him.

In A Harley Quinn Conclusion Fashion…

Basically, I want to turn away from a Harley whose sole purpose isn’t marketing to twelve-year-old boys. I want Harley to be deep and nuanced, to struggle with her own mind and to overcome past trauma through her own willpower — and maybe with a toxic kiss on the cheek for luck.