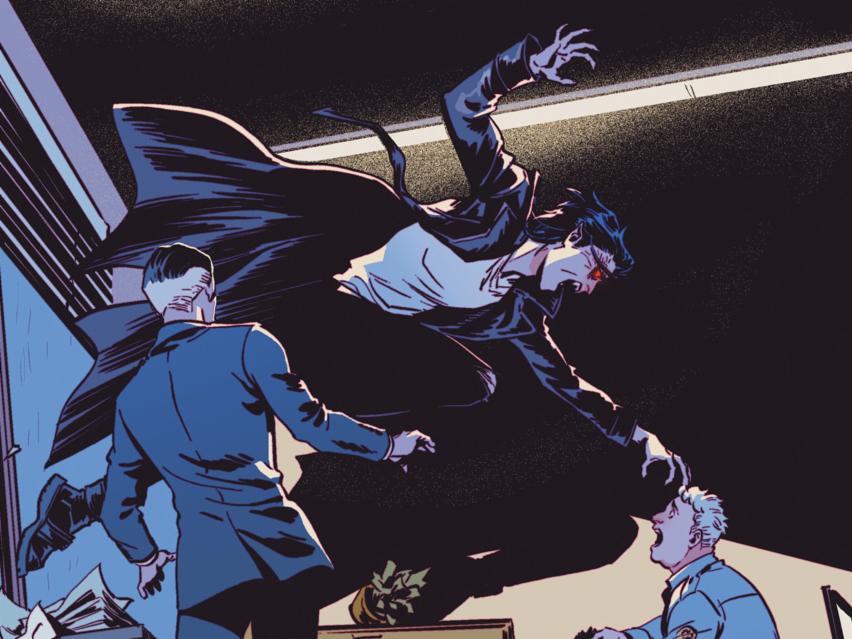 What The Hot Dog Happened In Vampironica: New Blood #1?

The issue follows suit right after the previous mini-series and crossover, Jughead: The Hunger vs. Vampironica. But don’t fret! If you haven’t read that series, I would suggest doing so, but the first issue gives you an informal recap. You get a broad idea of what happened during and at the end of the series. The two authors we have for this series (all of them) are @wesuribe and @sharecacole, who are all over Archie Comics all the time. Today we have @sharecacole reviewing, once again, Vampironica.

What Happened To Vampironica & WolfJug?

Everyone disappeared into thin air randomly and no one has been seen since… until New Blood #1. Veronica shows up abruptly on the floor in front of Archie with Hot Dog. As Archie is just as confused as a normal person would be, Veronica needs some time to figure out what is going on. In order to save Archie from knowing anything that Veronica doesn’t know she stammers that she was mad at her parents and has to go right now to apologize. Veronica can’t tell Archie that she kissed Jughead — er, JugWolf — and a whole war ended with the Werewolves winning over the Vampires.

There’s additionally a satanic book at play here too that needs to be discussed because that is how everyone disappeared in the first place. But we are getting too ahead of ourselves, first, we need to find out what Veronica’s parents want to tell Veronica about who she is and where her vampire lore came from. In a side plot, we have a vampire looking for Keller and things won’t end well once this series has its finale just based on this scene,

“War’s coming, and mark my words — you will reap what you’ve sown.”

Only for Keller to respond: “Son of a bitch.”

This series, entirely, has the same writers, colorists, artists, and letters throughout. (At least for the most part.) From the beginning, Frank Tieri has given us some wonderful narratives in the Archie-verse throughout this haunting series. We have Michael Moreci as well with Tieri on the story. Matt Herms, whose coloring is outstandingly haunting throughout this series, is on-board as the colorist; Audrey Mok, who is doing the art for this series (Mok also does some wonderful variant covers for multiple series’); Jack Morelli, whose lettering is one of the best from our humble opinion. Honestly, this series had a lot to live up to because all of our favorite creators are behind it: (No pressure, lol.)

However, consistency is key and it is very relevant here. If any creator wanted to know how to do a crossover or any sort of multiple mini-series’ with the same characters, look at this for an example. This is a fantastic example of how to keep the consistency of the voice but also the art, coloring, and lettering. If you have read the previous series other than the first and original Vampironica series (by Megan and Greg Smallwood), this is very consistent. Tieri, who wrote both the most recent crossover and The Hunger Series, keeps the characters’ voices in tune so effortlessly. Even when there is a mouthful of narrative (see: PG. 5), we still don’t feel overwhelmed with the team of Tieri and Morelli.

Is Everything Coming Together?

Of course, the narrative is outstanding, but the art is something to praise as well. With this being an Archie Horror series, the art is unforgettable, as it should be. It is dark when necessary but light when applicable. Specifically, on Page 8, there is a dark purple hue throughout the police station. This showcases the darkness outside, yes, but also the darkness inside because of the vampires’ presence. Once you have a panel of just Keller, his face shadow is purple, but not the background. Behind Keller, the background remains a pale off-white color.

Small instances of color being used in a haunting way for the reader (see: PG. 10). When the reader gets to page 12, they are encompassed with the light coloring again. Showcasing that Veronica and her family are not dark presences, but instead light. Veronica is one of the good guys, as opposed to other vampires. We have a major plot in this first issue, one that shocked us. We won’t tell you what it is in this review but let’s just say… the scariest vampire in Riverdale isn’t the one you think you know.

Who knew that Vampires and Werewolves would have this much drama? I thought Riverdale was bad. Nonetheless, this series is a hit so far. The first issue continues the story, gives a pleasant recap, and expands on what we know (or don’t know). Throughout this series, we have had the pleasure of keeping up with the lore of both Juggie and Veronica as their counterparts.

It is astonishing how the team can keep the lore expanding and growing and there are no loopholes yet. There’s nothing that has been missed, nothing that has been confusing thus far, I only want to know more and more about Veronica and her parents and how Vampires and Werewolves have existed in Riverdale.

What The Hot Dog Happened In Vampironica: New Blood #1?
WRITING
100
ILLUSTRATIONS
100
ENJOYMENT
100
LORE
100
Reader Rating0 Votes
0
PROS
THE COLORING, ART, AND ILLUSTRATIONS ARE GORGEOUS.
THE WRITING IS TOP NOTCH, ALWAYS.
VERONICA LOOKS SO PRETTY IN THIS SERIES
THAT PLOT TWIST WAS A PLOT TWIST
CONTINUING THE LORE OF THE CROSSOVERS
CONS
I WANT TO KNOW WHAT IS GOING ON ASAP BUT I HAVE TO BE PATIENT
100
WHAT THE HOT DOG?!