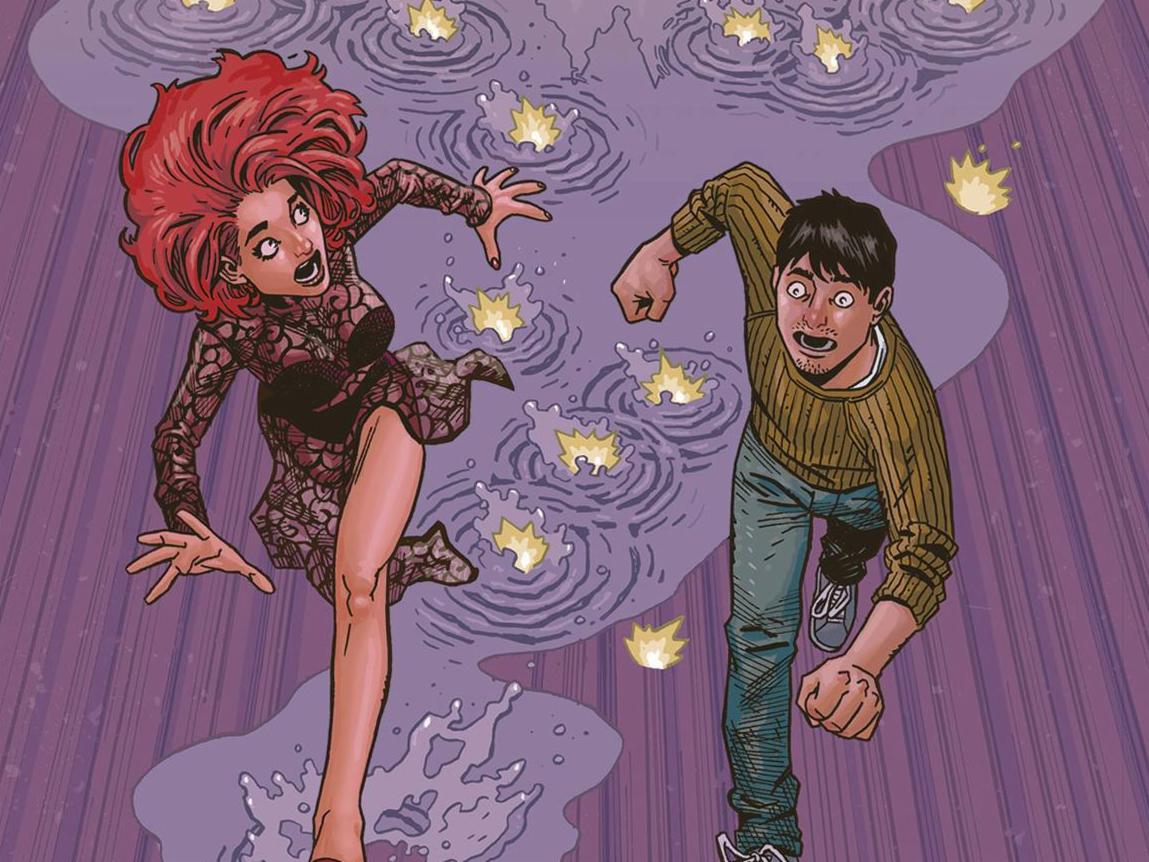 After discovering the incredible boost to their powers that come from joining hands, Charlie and Jill are on the run from the Variants Crime Unit. With shocking new powers and a whole lot of danger, what will they decide to do in Heart Attack #2?

The sudden explosive nature of Charlie and Jill’s combined powers draws the attention of the Variants Crime Unit. Jill takes Charlie to her own secret hideaway where they can wait out curfew until the morning. Though they try to sleep, both of them are too wound up from the discovery of their powers. They stay awake and discuss what they could mean for the future of Variants everywhere.

Jill, ever the activist, believes that together they can gain some freedom for people like them in the city. Charlie is a lot more hesitant. He believes that if they go on the offensive, they’ll end up causing more harm.

Charlie also learns more about Jill’s family. Jill has a little sister, Ash, who’s basically her entire world. When the curfew ends and they can return home, Charlie gets to meet Ash. While nothing overly romantic has happened between Charlie and Jill yet, Ash still makes it clear that if he hurts her sister, she’ll kill him.

What happens next might just make Ash fulfill her promise too. In the final portion of the comic, it is revealed that Charlie is secretly working with the Variants Crime Unit. His objective is to take down high-level members of the Freebodies movement. What seemed like a horrible accident for Charlie and Nona in Heart Attack #1 was actually a trap set by Charlie to catch Nona. To make matters worse, he is now tasked with eliminating Sefton, the leader of the Freebodies. Since the government knows Charlie has gotten close to Jill, anything he does will definitely put her in danger.

What About Love In Heart Attack?

Now, we know that eventually Charlie and Jill are meant to fall in love. Considering they’re already at the hand-holding stage, their romance has a solid beginning. However, I’m not sure how I’ll be able to support these two in an eventual relationship if Charlie is going to betray her. For now, all I can do is hope things play out in a way that doesn’t ruin any chances of Charlie being redeemed to readers and Jill.

Read All About It In Heart Attack #2

Despite my hesitations with Jill and Charlie’s relationship, I’m still greatly invested in their world and struggle. The harsh laws and practices that discriminate against Variants in the world of Heart Attack are meant to relate to the real world. This is seen clearly through the articles included at the end of Heart Attack #2.

The first piece, by Michael Maverick, describes what life is like for a Non-Variant around members of the Freebodies movement. The essential message of this article is that Austin should build more walls to keep Variants out. Michael believes that everything Variants say about Governor Pritchard, the woman behind the creation of the I-35 Wall and the Variant Crimes Unit, is false.

While this piece is filled with aggression against the Variants – at one point he calls them “Unemployed Genetic Aberrations” – it is an interesting addition to Heart Attack #2. Most of what we’ve seen so far has been from the point of view of either Freebodies themselves, or members of the Variants Crime Unit. This man is neither. It provides an insight into what some of the public feels about Freebodies. His words serve to remind readers that just because we see the story and the plight of Variants from one angle, doesn’t mean everyone on the sidelines feels the same way.

In Michael Maverick’s piece “Austin Needs More Walls and Patriotic Warriors to Patrol Them,” Governor Pritchard is introduced. This second article really helps us get to know her and her ideals. We haven’t seen her in the storyline of Heart Attack just yet but given her hand in so much of the anti-Variant policy in Texas, she’s sure to emerge eventually.

This article makes it clear that private prisons in Texas are being used to hold immigrants and other minorities, including Variants. Reporter Steve Futterer describes the cycle of incarceration. Candidates are funded by private prisons in order to enact more policies to fill those prisons, creating an endless cycle.

The last, but perhaps most impactful, article gives details on the creation of the I-35 Wall. Originally, the wall was constructed to be a quarantine barrier during an outbreak. The outbreak eventually led to the emergence of Variants. However, it was built largely after the outbreak had already been contained. After the first Variant appeared (then Senator) Pritchard created the idea of using the wall to contain Variants, which propelled her campaign. Now, the Austin Wall is home to her Variant Crimes Unit.

“Variants aren’t actually human, so they actually have no human rights.”

With what we now know about Charlie, it’s clear that conflict is on the horizon for Jill. I’ll be interested to see how that all plays out, and how I’m left feeling about Charlie when it’s all over. I’m also looking forward to seeing how the wall impacts the story, and when we’ll get to see Governor Prichard.