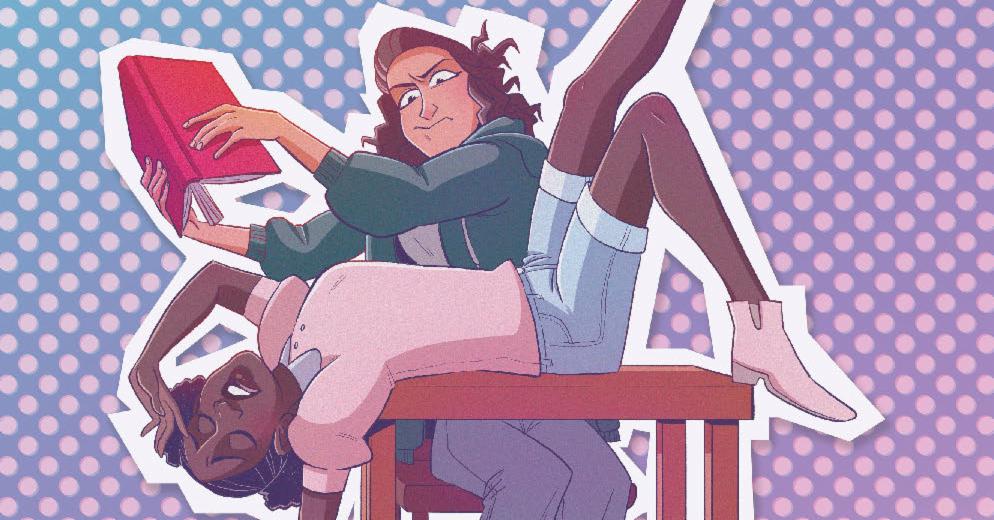 The team came together just in time for their first game! But with so little time to prepare, are they ready for this? From Carly Usdin, Noah Hayes, and Rebecca Nalty comes the next exciting installment, The Avant-Guards #3!

Game Time in The Avant-Guards #3

#3 opens on their first day of practice. Ashley takes on the role of coach and helps the rest of the team prepare for their first game. The next day, they’re off to their first game but Charlie appears to be nervous. In another conversation with Liv, she reveals that she has often dealt with panic attacks before games in the past. She even had a basketball scholarship but lost it for unknown reasons.

After that, she transferred to an art school to pursue filmmaking. They arrive at their destination and find that their opponents, the Cuddly Retrievers, are unusually friendly. The game begins and Ashley is pleasantly surprised by just how well the Avant-Guards play. The Avant-Guards #3 closes with the team celebrating their victory.

Teamwork On and Off the Court

Once again, The Avant-Guards #3 teases us with hints about Charlie’s past. We now know that she’s been dealing with anxiety long before transferring schools. We also learned that she had a basketball scholarship but lost it. Clearly, something must have happened, but what? Perhaps that something caused a rift between her and the other players. This would explain why she was so resistant to joining a team again. In the meantime, it was nice to see her start to open up to Liv. Hopefully, we’ll start to see her emotionally bond with the rest of the team too. The Avant-Guards #3 also brings back Liv’s internal monologue, giving us an insight into her own anxieties about the team. Even though she seems confident and adventurous, I like seeing this more vulnerable side of her. It keeps her grounded and relatable.

While the other team members aren’t as heavily featured, Usdin gives each of them time to shine. Ashley makes an excellent coach who is full of positivity. Additionally, the more she holds out on explaining her injury, the more I want to know about it. Like Ashley, I was surprised at how quickly they came together as a team. Charlie is definitely a star but each of the other players can hold their own. Even so, the Cuddly Retrievers didn’t seem like they were on the same level as the Avant-Guards. Maybe future teams will be more difficult to beat.

#3 is action-packed! This issue contains multiple basketball montages that are so much fun to look at. First, the action itself flows well and is easy to follow. There are a couple of two-page spreads that both make great use of different panel sizes and shapes. The first spread transitions from traditional rectangular panels to more raggedy-edged panels. By the bottom of the page, the panels have vanished completely.

This creates a sort of scrapbook look with the players cut out and pasted on a patterned background. I also like that every character’s appearance helps flesh them out whether they’re in the foreground or the background. For example, on the first page, we see Tiffany charging her crystals in multiple panels. Later on, she refers back to this action. These kinds of details make the art of The Avant-Guards really stand out.

The Avant-Guards #3: Misfits to All-stars

Three issues in, The Avant-Guards #3 keeps the series going strong! The team came together quickly, but I suspect the new challenges are just around the corner. Going forward, I expect to see more emotional bonding between Charlie and the rest of the team. At this rate, we probably won’t get Charlie’s full backstory until the end of the story arc. Conversely, I hope that we get the story of how Ashley broke her knee sooner rather than later.

Maybe this could be a way for Charlie to connect more with the team. Nevertheless, I appreciate that Usdin takes the time to really build these characters and their relationships. I can’t wait to read more!

The Avant-Guards #3 by Carly Usdin, Noah Hayes, and Rebecca Nalty
Victory!!!
As per usual, The Avant-Guards #3 is so much fun to read! The montages and basketball sequences really stand out. The plot thickens as we continue to uncover Charlie's past. This series is still going strong and I'm excited to read more!
PROS
CONS
94
Go Team!