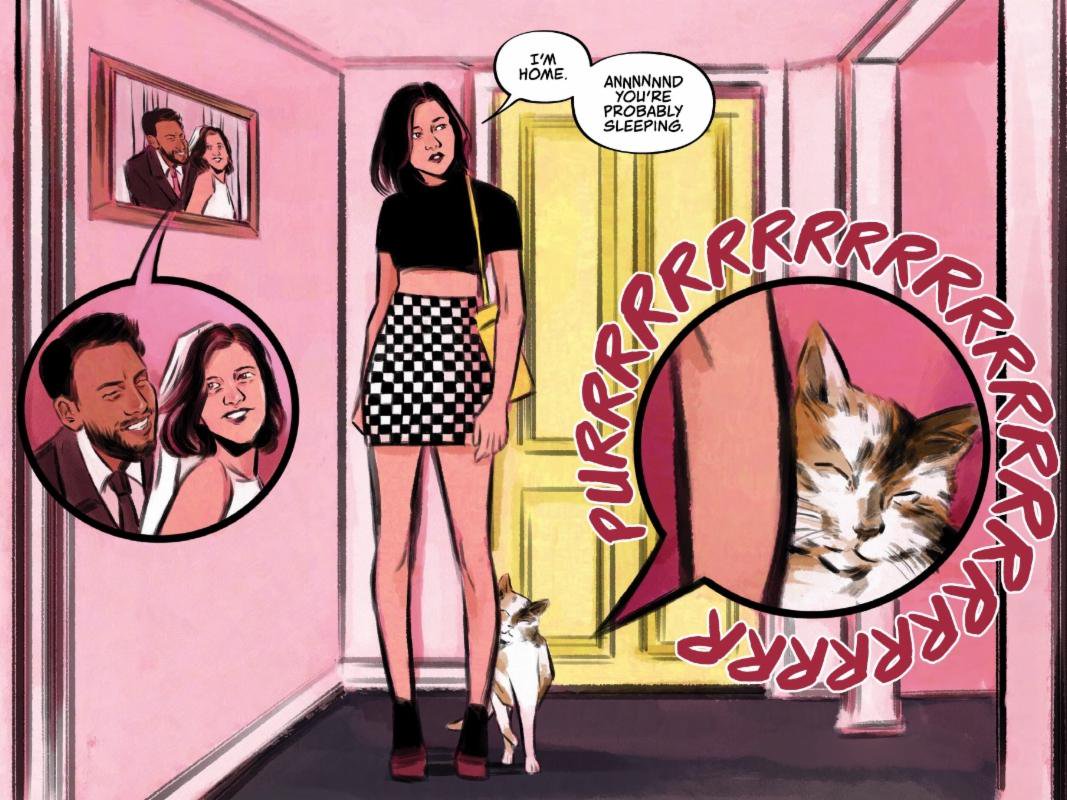 Beware: Snap Flash Hustle #1 is meant for mature audiences. There is nudity, adult language, and adult themes. You have been warned.

In the new age of social media influencers, drug cartels, and Instagram modeling; there’s a world of content to write about. Writer, Pat Shand and artist, Emily Pearson, took advantage of just that in Snap Flash Hustle #1 under Black Mask Studios. They were not alone, however, with the fantastic letterer Jim Campbell as well finishing up the touches on this incredibly unique story.

The plot of Snap Flash Hustle #1 goes like this: Haley Mori, basically a new aged Instagram model, accidentally gets into some trouble. Trying to make ends meet by modeling as much as she can for up-front cash, it doesn’t seem to be going too well for her. Her bills are backed up and she is in as much debt as a college student, if not more (and that’s saying a lot!) She could use anything right now.

When she accidentally uses a hashtag (#SnapFlashHustle) to get more followers, likes, and views on her Instagram picture, she falls into a rabbit hole of an elite society. This secret society of elite models in NYC is using their platform to sell narcotics. After getting caught and being threatened… this job field isn’t looking so bad for Haley. She could pay back her debt, her husband would never have to know, and more importantly, she would be the model she craves to be. What could go wrong?

The expectations we had going into this series were positive, the cover brought us in. Just based on the art and style of the cover, we knew this was going to be something great. Having previously covered a little of Pat Shand’s work for Breathless and having read The Wilds, we knew this was going to be something marvelous. And it was. From the beginning of Snap Flash Hustle #1, we get beautiful artwork by Emily Pearson. If you have read or even seen The Wilds, you know what I am talking about. Pearson’s art is quite out of this world fabulous to look at.

The writing, of course, is quality just the same. Shand has a way of writing engaging characters and scenes. These characters, especially Haley, are supposed to have a relatability factor to them, and they do. She is in debt, trying to find a way to make money; she uses Patreon, private Snapchats, etc. This calls back to the real-world of ‘jobs.’ The concept of using Instagram and social media to make money is insanely popular right now and this comic shines a light on the dark aspect of it. I would say that’s quality writing. To formulate such a modern theme but make it a bit gloomy is smart.

A Callback To Reality

As mentioned earlier, this series is calling back to reality with the use of social media and becoming an ‘influencer.’ Yet it provides a darker tone to it — Haley uses a hashtag to gain more likes and followers on her pictures. Just by mere chance, she lands in a drug cartel elite society. Nonetheless, this calls back to the concept of hashtags — who makes them? What are they for?

And by using one hashtag, without knowing what it means/is, can we be in the same situation as Haley? No one worries about hashtags on social media, simply because anyone can make one. This series shines an interesting light on looking closely at what we follow in terms of trends. This callback to reality is what sells Snap Flash Hustle #1. The series is incredible regardless, but it keeps you charmed by what is going to happen next. We can’t wait to see what happens next either.

Snap Flash Hustle #1 Is A Must!

At times, the characters can be a bit vague, possibly on purpose. This, I am assuming, is going to lead to future issues. One of the vague characters is a possible roommate or something? That or they have a polygamous relationship? It’s a blurred line, however, I am leaning more towards polygamous.

I know she is someone that is close to Haley and her husband (they sleep in the same bed). But I would love to explore more of Haley’s home life. In the second and future installments, I hope they focus a bit on that aspect of her character. Regardless, get Snap Flash Hustle #1 — it’s glorious so far.