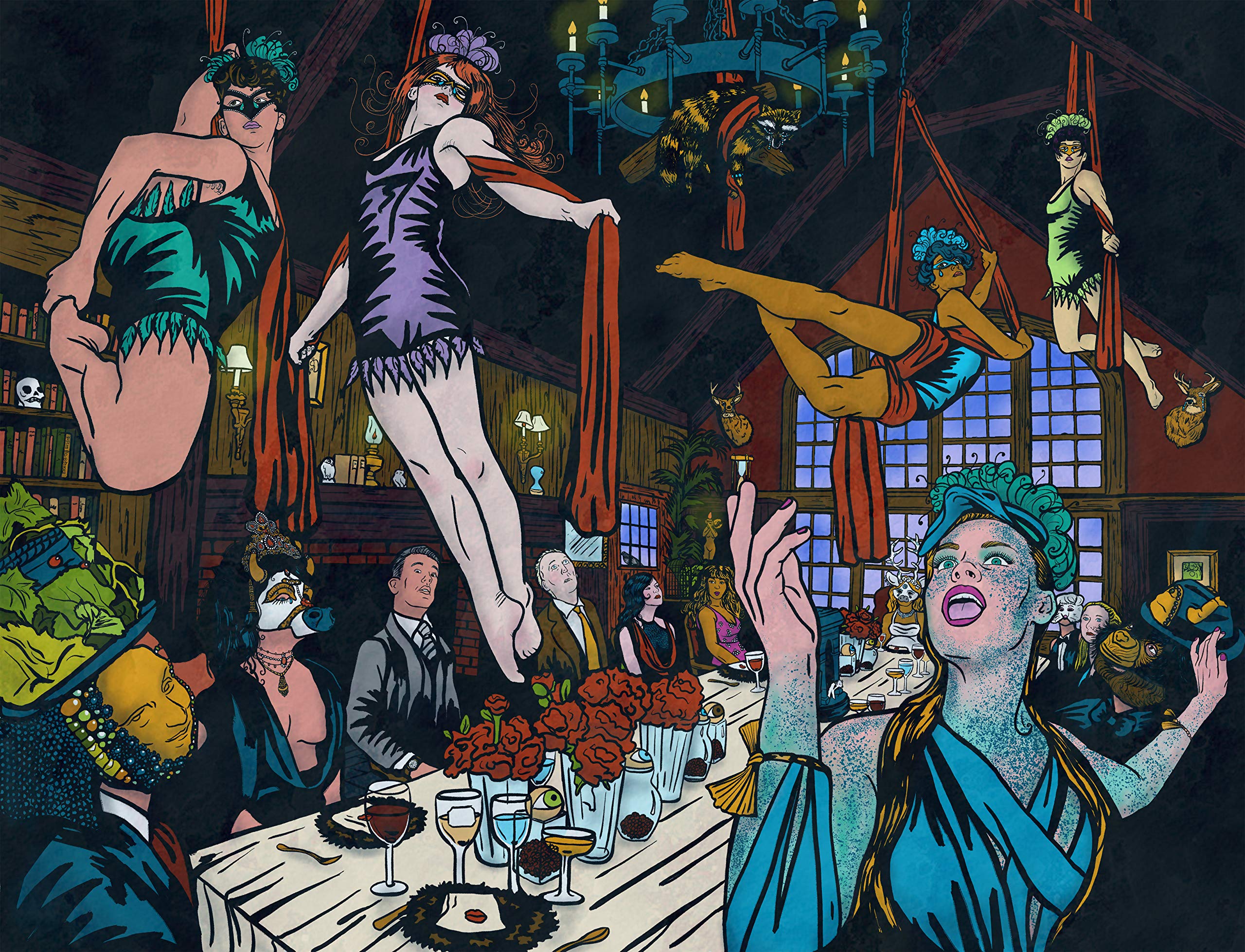 The Illuminati Ball is written and illustrated by Cynthia Von Buhler. Fair warning, this book is made for mature audiences. It also feels like something straight out of the Twilight Zone. Von Buhler creates a unique take on the mysterious Illuminati society. The story mixes in mad scientists, animal experimentation, masquerade, and a will to change the world.

This astonishing piece of work created by Von Buhler has captivated us in both fact and fiction. She provides detail on the myths and truths behind the Illuminati society. There is even some insight on how to attend the real Illuminati Ball.

The Sounds Of Animals Fighting

Cynthia Von Buhler brings together mystery, conspiracy, and the human condition in one magical story. There is a lot to know as you enter this event. In short, not everyone gets to experience the Illuminati Ball. Those seeking wealth, love, and power are all worthy candidates. But remember, you have to have something to give them in return. Once picked, the night will begin with dinner and match you with the proper kinship. So, take off the blindfold, and put on the mask, hold on for the ride that awaits. From there, your life will never be the same.

Overall, not only is The Illuminati Ball about conspires and secret societies, but it goes into understanding human and animal rights as well. We experience an excessive amount of animal mistreatment throughout the book. The splicing of human and animal DNA is just the start.

The scientist, Jacob, treats the subjects as cruel as one can imagine until the impending uprising and escape. Upon their escape, the six subjects see the Georgia Guidestones and commit themselves to a purpose. The six find meaning in their existence, try to have children, and carry out a concept that they don’t fully understand. An obsession with understanding their purpose leads the group to carry out their version of the Illuminati Ball. The subject and action of morality is the central conflict that the party faces as they interact with the selected guests.

The Art Of An Animal

Second, Cynthia Von Buhler created The Illuminati Ball by herself. Aside from the lettering done by the crafty Aditya Bidikar. It certainly matches Cynthia’s tone and vibe of the book flawlessly. Based on the actual production of The Illuminati Ball, she captured what one would witness if attending the event. You can ask the Pig King yourself if you want to know more about it. (However, I did, and it was an interesting conversation, to say the least.)

The artwork of The Illuminati Ball captures the bizarreness of the story. Primarily, she captures the dark essence of the story with her color template and precise details. She plays with panel shapes and sizes to elevate critical moments in the book. Additionally, Von Buhler’s painting style has a wide range of details in her digital work. The style she uses emphasizes the fashion era of the book as well. Many of the images in the book are actual photographs that she redrew herself.

Taking Action With Art & The Illuminati

Overall, there are a few themes within The Illuminati Ball. A large one would be the animal rights agenda. Throughout the entire book, we see how experimenting on animals is wrong. She makes the connection to harming animals by using humans. In this way, she’s trying to open the eyes of a broader audience to realize the evil behind animal testing.

There’s a vibrant push for veganism in the story. The prepped meals are all clearly vegan. The characters do mention how disgusting it is that someone would eat another animal. It comes at the perfect time with the growing vegan community right now.

Will We See You Soon At The Illuminati Ball?

In conclusion, this is a powerful book from animal rights and veganism to genetic manipulation. Cynthia Von Buhler has astonished us with how immersive the book is. Don’t forget this is a real event. So look into this magical event if you’re in the New York area. It is extremely exclusive and will not be happening very often after this year. Overall, Cynthia Von Buhler proves her artistry in a single book. It’s well worth the read and will take you down a rabbit hole of research and greater understanding. No doubt, The Illuminati Ball is one of the best books of the year.

Unveiling Secret Societies In The Illuminati Ball
The Illuminati Ball by Cynthia Von Buhler is an outstanding and captivating story. A real work of art by Von Buhler, and will leave readers begging to know more about the secrets of the world. It's one of the best comics to come out in 2019.
WRITING
95
ILLUSTRATIONS
90
ENJOYMENT
100
Reader Rating0 Votes
0
PROS
CONS
95
STUNNING