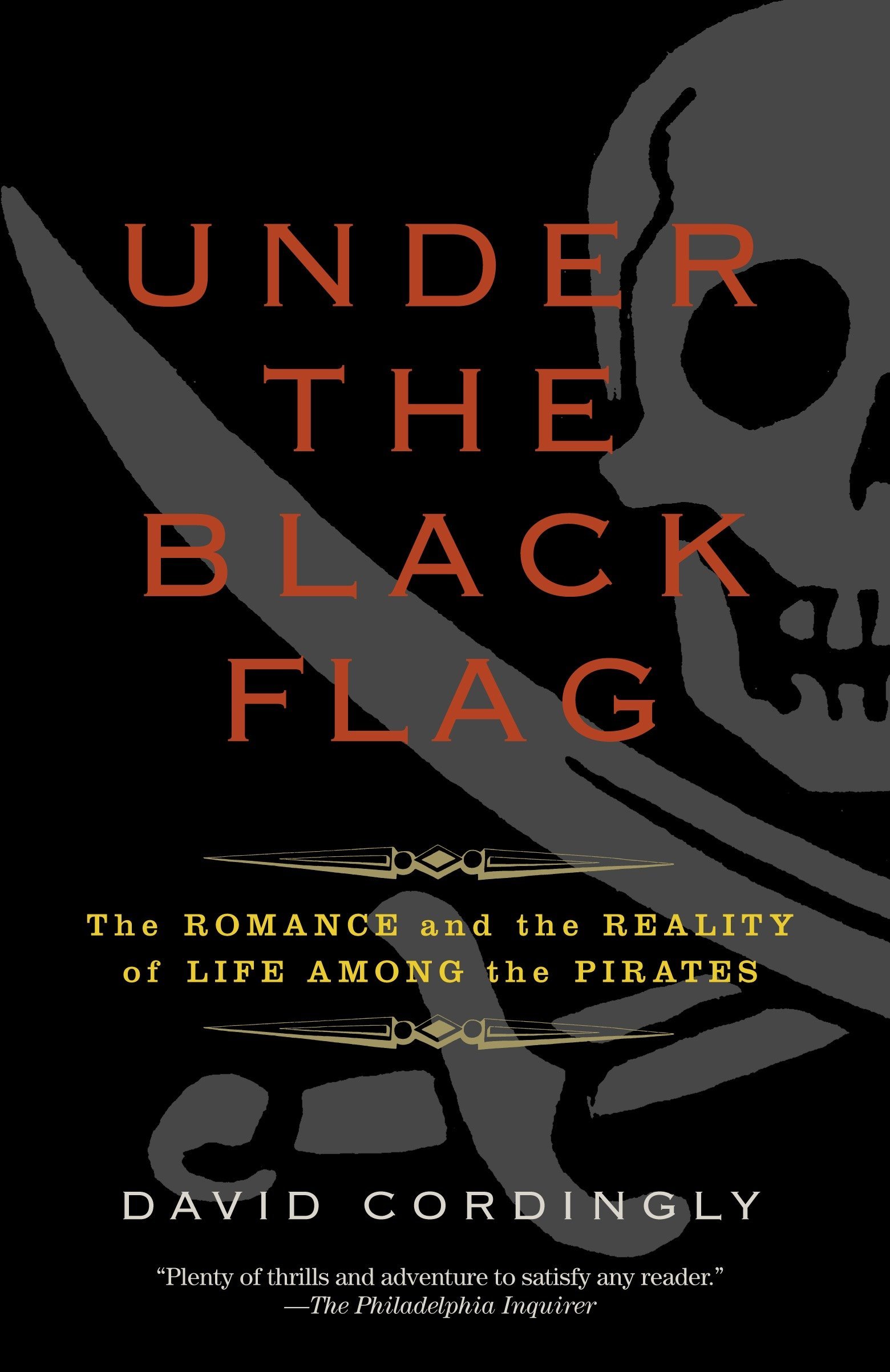 #AmReading: Under the Black Flag — Pirate Lore VS. Pirate Reality

It’s safe to say our general knowledge of pirates and life on the high seas comes from pirate lore. With works like Robert Louis Stevenson’s Treasure Island, J.M. Barrie’s Peter Pan, and movies like Hook and the Pirates of the Caribbean franchise, pirate fans have a vast amount of mythology to work with. The reality, however, is much more gruesome.

In Under the Black Flag: The Romance and the Reality of Life Among the Pirates, Author David Cordingly addresses the more popular aspects of pirate lore with their origins and what actually happened. From the 1500s-1700s, piracy was at its peak all over the world, not just in the Caribbean. Cordingly’s well-researched book pulls from court documents, journal entries, letters, and other factual resources to get the history right. With it, he shares the legends of famous pirates and privateers and how their stories may have influenced the pirate lore we know today.

The book starts off with what pirate fans know best, the stories. Cordingly first breaks down Treasure Island and where the origins of buried treasure, peg legs, and specifically Long John Silver came from.

For example, Silver’s character was inspired by a friend of Stevenson who had a peg leg. The author wanted to create a villain who lacked all the positive qualities his friend had and develop that further. While the character was a literary creation, Silver’s occupation as the cook is historically accurate as amputee sailors were often assigned as cooks on their ships.

With each aspect of pirate lore from walking the plank to the Pirates’ Code to the conduct of pirate captains, Cordingly separates fact from fiction. Pirates didn’t make their enemies walk the plank as it was a waste of time, a Pirates’ Code of sorts did exist but varied from ship to ship, and captains were much more cruel, sadistic, and ill-tempered than the fictitious captains we know.

In taking a deeper look at pirate lore and where it came from, we get a better sense of why pirates were romanticized. In addition to the works mentioned above, additional pirate stories like The Successful Pirate and The Pirates of Penzance paint pictures of pirates being symbols of freedom. They are usually depicted as greedy, mean, and ruthless, but also jovial and care-free.

The captains especially are made to look like educated, charismatic leaders. Take a look at Peter Pan’s Captain Hook. Yes, he wants to kill Peter Pan, but also believes in good form and can be charming in a way. Even Long John Silver develops a soft spot for hero Jim Hawkins in Treasure Island. Pirates, we are lead to believe, aren’t all that bad.

Additional details were also created to build up the mythology. Pirates’ search for riches, the kinds of ships they used, where they made port, and what they did with their captives are just a few examples. The stories would have us believe pirates were only after gold, silver, and jewels. Likewise, we often saw pirates in film sailing large ships with three masts.

However, this may be due to the need for more room to film and create action scenes than anything else. Ports like Tortuga and Port Royale are well known as pirate havens and as is the practice of marooning enemies on uninhabited islands.

One of the most entertaining parts of Under the Black Flag is exploring the famous pirate legends. Cordingly goes into detail about Edward Tech, Blackbeard, and how ruthless he actually was. Torture methods are described in detail along with his strategies for taking on new ships and avoiding capture.

Likewise, Captain Kidd’s adventures show the other side of the spectrum. Kidd never had the intention of becoming a pirate. While on a voyage, his crew grew restless and pressured Kidd into attacking an English ship, an ally. Once word got out, he was branded as a pirate. Even efforts in turning himself in and explaining the situation didn’t save him.

The author also goes to great lengths to differentiate pirates from privateers. Pirates would attack anyone they wished. Privateers were granted commissions from their monarch to attack specific enemies on behalf of the nation. Francis Drake and John Hawkins, for example, attacked Panama and Spanish forces in the 1570s on behalf of Queen Elizabeth.

While they were still violent and stole large amounts of treasure, they were still technically privateers even though their actions were similar to those of pirates. The same goes for Sir Henry Morgan who also attacked Spanish enemies in the 1600s and was eventually knighted for his deeds.

Lesser known legends also include Jack Rackham (Calico Jack) along with female pirates Anne Bonny, Mary Reed, Grace O’Malley, and Mrs. Cheng. Cordingly goes on to explain that there isn’t as much documentation for certain pirates. Unfortunately, their lives and exploits are lost to history.

When comparing pirate lore to the reality that was, there is no escaping one simple fact. Pirates were not romantic. Not at all. In addition to trial documents, reports, and depositions from victims, the author often references a book written in 1724 by Captain Charles Johnson, A General History of the Robberies and Murders of the Most Notorious Pyrates.

We learn that pirates were in search of supplies, food, drink, and skilled workmen in addition to treasures. When they did find gold, they often spent it on women, gambling, and drink rather quickly. There was no need to bury treasure when there was no caution to save it. In fact, many successful pirates became broke due to these spending habits.

The Pirates’ Code often referred to in film, especially the Pirates of the Caribbean films, did exist to some extent. However, the code was more focused on paying out the spoils of a battle or punishments for breaking rules. Surprisingly, pirate crews ran by a very democratic system.

Pirate captains were elected, and if not serving their crew’s interests, could be replaced. Mutinies didn’t always mean the captain was killed or marooned. Each pirate had a vote on where and who to attack. The captain may have been in charge, but the decision of where to go was up to the crew. Additionally, the ships they used were often smaller sloops as they were faster to avoid capture.

No work of fiction has yet to accurately portray the true history of pirates. This is mostly due to the violent nature of pirates. As shown in the chapter “Torture, Violence, and Marooning,” some things you just can’t show general audiences.

The more well-known stories became legends and the legends turned into common pirate lore. This fascinating history is presented in a way that will appeal to both pirate fans and history buffs alike. If you’ve always wanted to learn more about where all the pirate lore came from, but also want an entertaining read, Under the Black Flag does the trick.