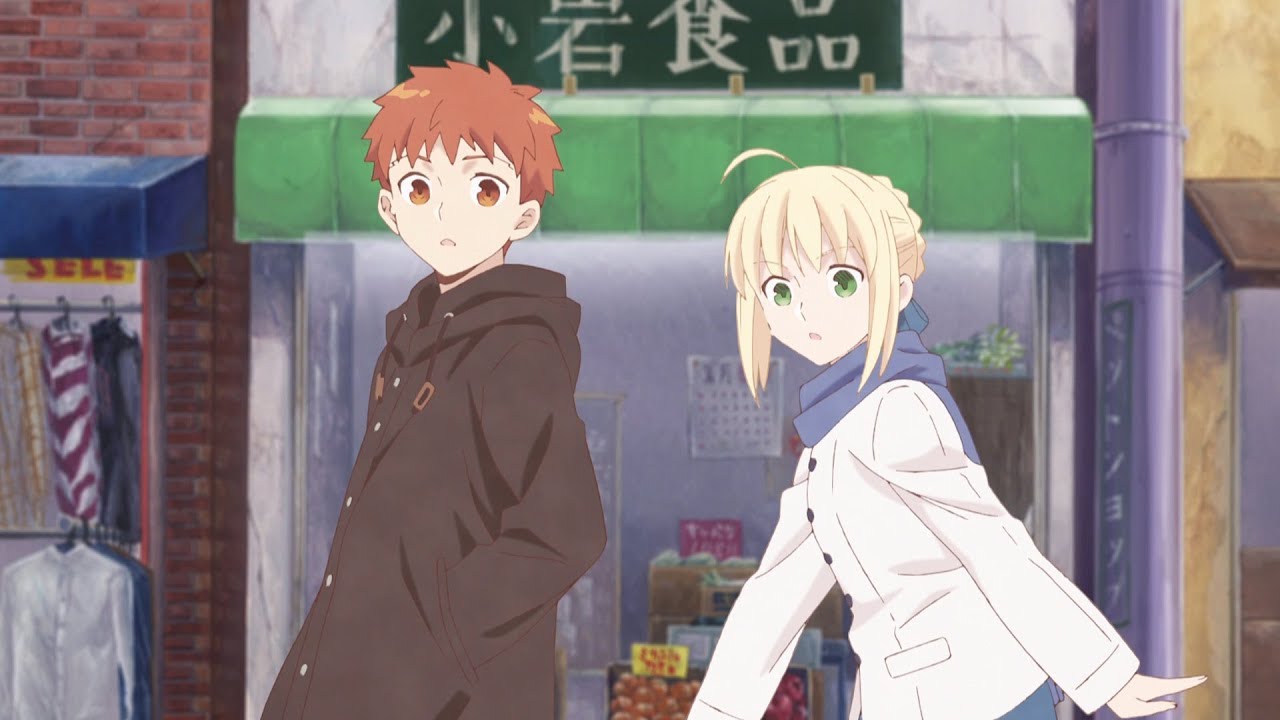 Today’s Menu For The Emiya Family Is Wonderful

Today’s Menu For The Emiya Family (2018) is a pleasant addition to the Fate franchise. The anime contains a series of short episodes that take place in an alternate reality of the Fate/Stay Night universe. For those already familiar with some of TYPE-MOON‘s other anime spin-offs, like Carnival Phantasm, this series is a similar inclusion to that list. Both titles feature all our beloved characters in a lighthearted scenario where no one dies.

What’s Today’s Menu For The Emiya Family About?

Today’s Menu For the Emiya Family is an anime adapted from a manga series of the same name. The anime is a lot like watching a cooking show mixed with TV drama. The show combines elements of the mundane and the Food Network into the daily lives of the Fate characters. The main chef of the series, Shirou Emiya (Fate/Stay Night‘s protagonist) spends a part of each episode preparing meals for his friends and family. Whenever he’s cooking, the protagonist provides an internal monologue about his recipes and broadcasts each step for the viewers to follow along at home. Shirou offers culinary advice and minor hacks on how to best prepare his dishes.

While prior knowledge of the franchise’s main story-line isn’t necessary for anyone to enjoy this series, it’s still very much nice to have. If you’re new to the franchise, I suggest that you look up some of the characters beforehand for basic context so you’ll understand some of the jokes going on in this series. (There’s not a lot of them but it still sucks to be left in the dark.) However, if you have plenty of time to spare this holiday season, I actually recommend you watch Unlimited Blade Works before starting this anime.

What I Love About This Anime

This series takes place in an alternate setting of the Fate/Stay Night universe, where everyone is enjoying themselves between events of the actual story. While their reasons for withholding the war are left ambiguous in the anime, it’s safe to assume that everyone has undergone an unspoken truce between parties. It’s either that or the characters have decided to disregard the main plot altogether. Regardless, I’m relishing in the momentary ceasefire between characters.

The character interactions in this anime are what I live for. Not all of the characters from the main franchise appear in this anime, but the small handful that do make this series all the more worthwhile to watch. There’s something blissful about seeing your favorite characters work everyday jobs and do chores; everyone just melds in perfectly with a modern environment. The characters are so kind and helpful to each other that it’s flat-out relaxing to watch.

Many of the darker characters in this universe have been toned down to cater to an audience of all ages. Their “evil” obsessions are now stretched-out and exaggerated for comic relief. It’s pretty fun to watch some of the former villains act out their original personalities as you start finding them “likeable” instead of a potential “threat” to your favorite characters. For the most part, everyone still has their powers and memories of who their enemies are; however, this doesn’t prevent them from hanging out with each other. There’s still plenty of room for fan-service despite the story’s lack of action and plot.

It Is Surprisingly Educational

While this series doesn’t exactly enlighten you with mind-blowing information, it does offer you a good insight into Japanese culture. Most of the series focuses on teaching us how to prepare popular Japanese dishes at home. These dishes are based on meals that are either native to citizens of Japan or recipes adapted from overseas influence. Because of that, characters sometimes provide extra context for the less localized food items. These tidbits of information are usually a brief explanation of what the ingredients are used for and how to best prepare them.

In the anime, Shirou is sometimes given “special” ingredients in exchange for preparing a meal for a Servant. “Servants” in the Fate universe are legendary icons that come from different periods in history. They are often heroic figures who originate from different areas of the world so their experience with Japanese culture varies. This makes their reaction to the country’s food and customs all the more wholesome as they’re learning new things firsthand alongside the audience.

The payments that Shirou receives from the Servants are usually ingredients familiar to both Japan and their own country. These payments can consist of a variety of different items, as the choices range from well-known ingredients like salmon to far less regulated products such as bamboo. But as expansive as these items are in the world, it’s still interesting to see how they blend in with different styles of Japanese cooking. For example, in episode five of the show, Shirou decides to make gratin using bamboo shoots after he obtains a bag full of them from a Servant.

The cooking portion of the anime is similar to watching a brief cooking tutorial on Youtube. A lot of these meals look complicated to make, but they only require a few basic steps to actually cook. You can obtain most of the ingredients at a nearby grocery store or in the Asian marketplace. The only problem with some of these recipes is that their ingredients take a lot of time to prepare; some items even require days to get ready. So make sure you clear your schedule before you attempt anything at home. Thankfully, the protagonist and his friends know what they’re doing when they’re offering culinary advice. They aren’t here to spout nonsense at the viewers. They’re offering you a legitimate play-by-play on how to make these meals at home.

For the most part, the instructions are straightforward and easy to follow along. However, exact measurements aren’t offered in the anime so you’ll have to improvise some things at eye-level. It’s best to make sure you stock up on plenty of ingredients so you’ll have some back-ups in case of mistakes. Rewinding through the episodes helps with the measuring problem as the pictures offer a good estimate of what’s expected. The artwork is gorgeous, and the voice acting is soothing to listen to, so it never feels like a chore to go back and check your work. But if you want to reassure yourself of what you’re doing, you could also try measuring everything based on taste.

Keep in mind that some of these dishes do require a lot of trial and error. Before writing this article, I did some test runs on the recipes out of curiosity. My first choice was to recreate the “Spring Green and Bacon Sandwich” from Episode Four of the series as I thought it was the easiest to make. However, the darn sandwich took me two attempts to get right. (The sandwich is delicious by the way.)

It’s very important to be mindful of the instructions when you’re cooking. I’m not a very patient person in real life so I’m the worst when it comes to cooking. I thought I could get away with skipping a step where you’re supposed to hold down a sandwich with a board before slicing it in half, but my attempt at a short-cut backfired on me. Instead of speeding up my progress, I ended up having my own sandwich implode on me out of my own negligence. In this case, the moral of the story is: don’t be like the author, please follow the instructions.

If you’re unfamiliar with your way around the kitchen, please ask someone to help supervise you through the process. There’s no shame in asking for help in learning how to cook, and it’s always better to know your limits. The last thing either of us wants is for anyone to hurt themselves while copying something they see in an anime. While your own efforts aren’t guaranteed to look exactly like the picture, these meals are no doubt worth the time to make. Everything is quite edible and you can always alter the recipe to suit your own style and taste.

Should You Watch This Anime?

Today’s Menu For The Emiya Family is unlike any of the other titles in the Fate franchise thus far, and I highly recommend it. With the series’ lack of death, violence, and eroge driving the plot, the Fate/Stay Night universe is a surprisingly pleasant world to live in. I’m thrilled at how they’ve remade some of the characters (whom you’d normally hate) in this series. Everyone’s so likeable that it almost overwrites my first impression of them from the main story.

Watching the characters cook is the best part of this show as they do a good job of enticing you to follow along. There’s just something bizarrely endearing in seeing fictional characters live out the mundane. It’s like being gifted the ultimate fan-service that you never knew you needed. The process is a lot like observing someone rough it out in the woods; some are able to get it right effortlessly, while others tearfully try their best.

You can watch the entire anime on Crunchyroll. There are only twelve episodes of the series available, and each episode lasts less than fifteen minutes. With the holidays just about over, what way to spend the new year than by sharing a series that celebrates the food and traditions of another culture? If you’re interested in reading more of our animanga reviews, you can find them here on our site.