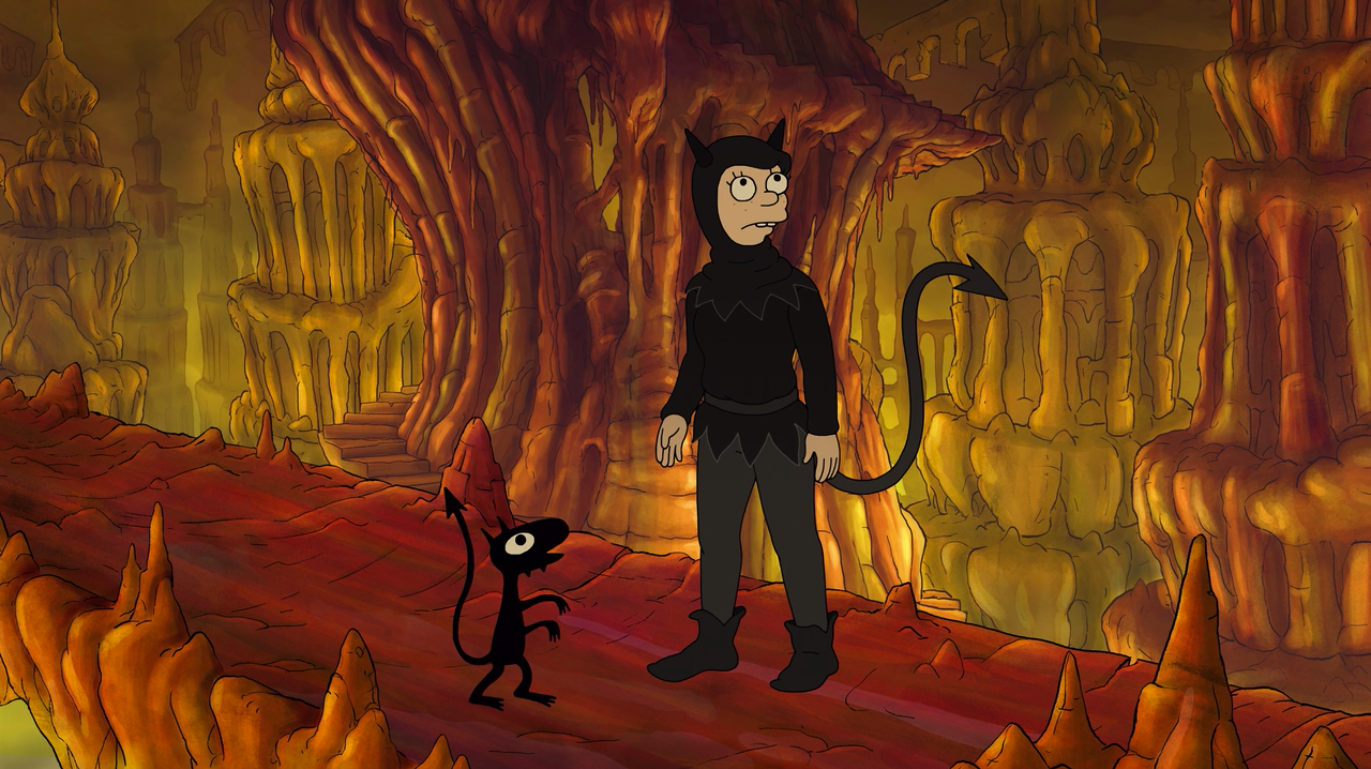 To Hell And Back In Disenchantment Part 2

Disenchantment certainly knows how to up the ante. The concluding episode of its first season, “Dreamland Falls,” rips the rug out from under us at every turn. Elfo dies. Bean — now possessing an eternity pendant — has a chance to revive him but doesn’t. Instead, she uses it on her mother, Dagmar, who’d turned to stone after she was born. This sets off a strange conspiracy; people around the castle are found similarly petrified.

Part 1 ends with the whole of Dreamland in stone, and Bean, guilt-ridden, sails off with Dagmar. All of this happens in a span of 28 minutes. It’s an impressive feat, as well as gutsy. A big part of Disenchantment’s charm, after all, is its sense of place and culture. Still, the show doesn’t think twice about axing Dreamland. I’m happy to say that the risk pays off handsomely in Disenchantment: Part 2.

Dreamland — the show’s main setting — is loosely based on medieval Europe (I say loosely because one of the main characters is an elf). It’s made up of a castle, a waterfall, and a sprawling seaside village, managing to be both majestic and modest. Villagers live in extreme poverty — the butt of many jokes, and a few plot points. Meanwhile, the royal family — which contains most of our cast — enjoy riches and adventure, but not without their own consequences.

Disenchanted To Meet You!

Part 2 of Disenchantment is especially keen on growing its characters. This is probably because we know them now; we’re able to track them through more complex arcs. What about the side characters? Don’t worry, they’ve been fleshed out too. We’ll start just as Part 2 did: with Dreamland’s bitter and broken king.

Hot-headed, selfish, and a bit dim, Zog didn’t exactly stand out, as far as kings go. It was only after the destruction of his kingdom — and the apparent betrayal of his family — in Part 2 that he truly began to develop. Even after the un-petrification of Dreamland, Zog was left cynical.

It doesn’t help matters when his wife, Oona, leaves him, or when Bean accidentally shoots him in the season finale. Yet those last few episodes see him become oddly sober (not literally, of course). He allows Bean to take the bullet out, completely trusting her after everything. The bond between them truly shines.

Oona’s moment comes after the chaos of “Dreamland Falls,” where she ends up sinking to the bottom of the sea. She’s found by pirates, whom she ends up taking charge of: among them is an elf, whose blood can activate the eternity pendant. With some convincing, he un-petrifies Dreamland. Oona and Zog divorce amicably. Now that she’s free, we realize just how much Dreamland has suppressed her true self.

Oona leaves with the pirates, entrusting Derek to Zog until her return. As usual, Derek is a bit of an after-thought; thankfully, he doesn’t stay that way. Derek gets an episode all his own, where we experience his loneliness first-hand. When Zog is shot by Bean, Derek is left to decide her fate; he agonizes over the decision, reflecting on their messy relationship. In the end, he makes a not-so-good decision. He’s still just a kid, after all.

As we’ve established previously, Elfo dies. He, of course, goes to Heaven; the bits and pieces of it we see are pretty much what you’d expect. Elfo’s main obstacle this season is his feelings of betrayal toward Bean. Even after she apologizes, he remains slightly bitter; it makes sense, given his feelings for her. When he does get over it, the show moves our focus back on his heritage.

It was confirmed in Part 1 that Elfo isn’t a full-blooded elf. In Part 2, it’s hinted that Elfo’s mother was an ogre. As he and Bean flee an ogre village in “Our Bodies, Our Elves,” the Ogre Queen recognizes his name.

We get a similar look at Luci’s background when Disenchantment descends into Hell. Despite his polish and confidence, it’s revealed that he is a mere “Level 0” demon. Suddenly, we wonder if all that swagger was just Luci trying to compensate. Our doubt suddenly becomes horror when he “betrays” Bean and Elfo, apparently having used them to get promoted in Hell’s hierarchy.

Fear not, Luci is a good guy at heart. So good a guy, in fact, that he sacrifices his position in Hell forever to save the lives of his friends. It’s a heart-warming twist that cements the love shared between our main trio.

Bean’s development this season is a bit of a roller-coaster, given that she’s the show’s protagonist. We see her grow in little ways in each episode, but, throughout, one thing keeps popping up: Dagmar. Bean comes to feel some pretty complicated things about her mother. At first, she’s relieved; she’s always yearned for that motherly bond. But in Maru — Dagmar’s ancestral home — things are starting to get strange.

It’s revealed that Dagmar’s family has a history of psychopathic tendencies and that Dagmar herself inherited a fair share. She’s the one behind Dreamland’s petrification, and she needs Bean to fulfill some unexplained “prophecy.” Bean’s not into it and winds up escaping. Across the rest of the season, she’s haunted by visions of Dagmar. She reflects on her own violence — albeit accidental — past actions, wondering if she too is destined to become as twisted. The tension reaches a fever pitch when the two come face-to-face again, ending in a maddening cliffhanger.

Disenchantment owes a lot of its intrigue to the satirical way it’s been written. Among other things, it pokes fun at religion, elitism, politics, and fairy tales. Through it all, the show manages to keep its head. We understand that it’s a sitcom — as opposed to a parody, which is more often fan-made — even if its world is cruder than we’re used to. Disenchantment is a fantasy. Part 2 is proof of this, giving us a taste of the outlandish places it has to offer.

Maru is the sandy, Egyptian-esque wasteland Dagmar and her family call home. We spend all of one episode with it, but it’s impossible not to feel uneasy; like Dagmar, Maru is eerily intriguing. Its musical score really hit the nail on the head — lullaby-like, off-kilter. As Bean explores the dusty chambers and crumbling halls, we wonder just how many secrets it holds.

Hell, on the other hand, blazes with life. Or rather, death. Its gravity-defying crags, rivers of flame, and clouds of Luci-like demons make for a pretty gnarly design. This is hilariously contrasted to the hierarchy of said demons. They’re dead-eyed employees, leveling up with each soul. The punishments they dole out are funnily half-hearted; I do wish we’d have got to spend more time with them.

I would say the same of Steamland, but I get a feeling we’ll be seeing a lot more of it. In the episode “The Electric Princess,” it’s revealed that certain Steamlanders were looking to forcibly remove Zog from the throne. Why we don’t know. After all, Steamland beats Dreamland in terms of prosperity. The technology is superior to anything we’ve seen — I’m talking robots, zeppelins, actual lightbulbs — and its people all seem educated, men and women alike. Certainly, this won’t be the last we hear of it.

What’s Next For Disenchantment?

There is one question on the minds of Disenchantment fans everywhere: “So, what’s next?” Even if it’s been renewed for a third season, it’s impossible to know just what that means. Will Zog survive his gunshot wound? What are Odval’s plans, now that he’s in power? Why did Dagmar rescue Bean, Luci, and Elfo, and what on earth are those creatures surrounding them? If nothing else, our questions are proof that Disenchantment: Part 2 performed at the level of its first season. Here’s hoping we’ll see an equally impressive third.