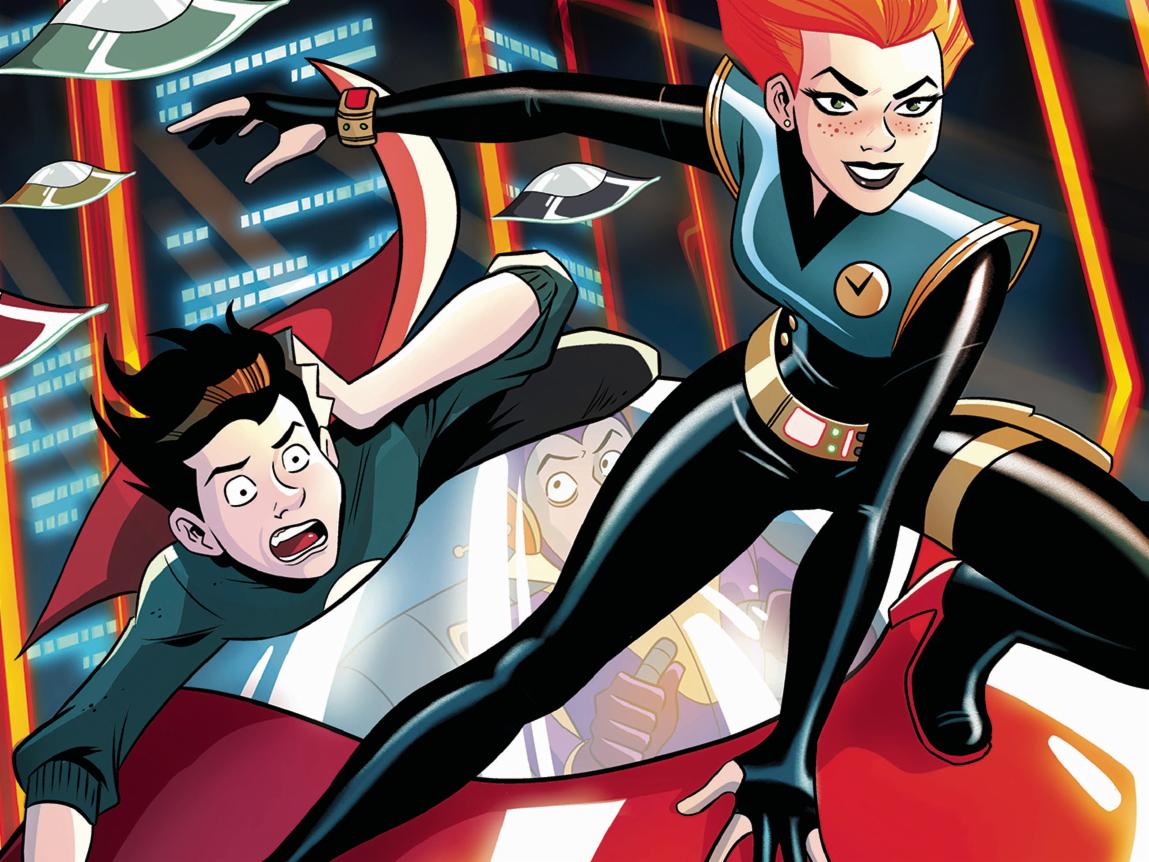 The World Of Tomorrow In Jughead’s Time Police #2

If readers are looking for a grand futuristic adventure, look no further than Jughead’s Time Police #2 by writer Sina Grace and artist Derek Charm. Be prepared for an excitingly new chapter of Jughead’s journey through time and space that will have people talking. The previous issue left our hamburger loving hero Jughead creating a time machine. After an accidental trip to the past, Jughead decides to try his machine one more time. Just as he’s about to embark on a new journey he is stopped by Marshal January McAndrews.

Who is Marshal January McAndrews and why is she stopping Jughead? Well, these and several other questions are answered in this fantastic comic. Grab your hoverboard and get ready for a marvelous turn in the 29th century, let’s review Jughead’s Time Police #2.

Plot From The Future In Jughead’s Time Police #2

The issue begins with Marshal January McAndrews standing in front of Jughead. She informs Jug that together they will fix the timestream; but, first, they will have to go to the future. Suddenly, they arrive in the 29th century where January mentions that she is a huge fan of his future accomplishments. Jughead immediately becomes stunned at the world around him and asks if he will remember any of this. January shows him a future invention called the Looper Scooper, that will erase his memory after they fix the timeline.

As they make their way to the Time Police Headquarters, Jughead stops in his tracks when he notices an all-you-can-eat food mall. When Jug begins to pig out, a group of Time Thieves enters the building creating trouble. After an astounding fight, Jughead mentions to January that if he can go home as soon as possible because he misses his friends. She tells him that he will go home shortly and not to worry. As she walks away she meets with a perplexing individual. This character reveal is unexpected, no reader will see it coming.

Tugging At The Heartstrings

As this series looks to be largely comedic, it is surprising that this much of the heart of the story is contained in this issue. This time period contains hoverboards, flying cars, and all you can eat food malls, what else could Jughead ask for? Well, this loveable goof wants his best friends with him on this journey. Throughout Jughead’s Time Police #2, there were light sprinkles of Jug mentioning that he misses his friends. The moment that fully pulls at the heartstrings, though, is when Jughead is asked to take a photo. He is seated in a recreated version of his favorite booth at Pops’ Diner. When he sits down he is surrounded by fans, but likewise by holograms of all his friends.

Right before the camera flashes, he just looks at his best friend Archie and falls apart. This moment is such a gut punch for fans of all Archie Comics. It’s just sweet that Jughead loves his friends so much that being somewhere new without them doesn’t feel the same. Readers can all agree that when they don’t have their best friend by their side, events feel odd and a bit lonely. It’s just wonderful that the artist and the writer could express so much relatability and emotion in this already fantastic issue.

January McAndrews has always been an intriguing character. In the original series, she was Jughead’s lovelorn Time Police partner. As she was written as a love interest for Jug, she was still written excellently and became a fan-favorite. In this new series, she is a completely new woman. She now looks like a respected Marshal of Time Police and not a lovesick teenager. In this issue, readers get to meet January fully and she seems marvelous so far. She is written as a character that not only means business but someone who can also have enjoyment.

With these changes, she looks like she will keep the title of a fan-favorite character. Other than these changes, the writer surprisingly kept the lovelorn quality and saved it for the end of this issue where the writer took their own spin on it. It’s written so thoroughly that readers will want to read the next issue as soon as possible.

Back To The Future — We Mean… Jughead’s Time Police #2?

Jughead’s Time Police #2 is a phenomenal issue for fans new and old. It contains adventure, heart, comedy, and Easter eggs galore. I don’t think readers could ask for more because this issue contains everything an excellent Archie Comic should have. Other than what is stated above there is so much more you can unpack from this issue. The comic contains many Pop Culture references, wonderful art and random scenes with Archie and Dilton.

Trust me it’s one of the best moments that will make readers want to know more about what was going on between those panels. There is so much in this issue that you can unpack. If you do, let us know what you unpacked from this legendary second issue. Let me just say if you are looking for a comic full of fun, adventure, and hamburgers look no further this issue has it all.