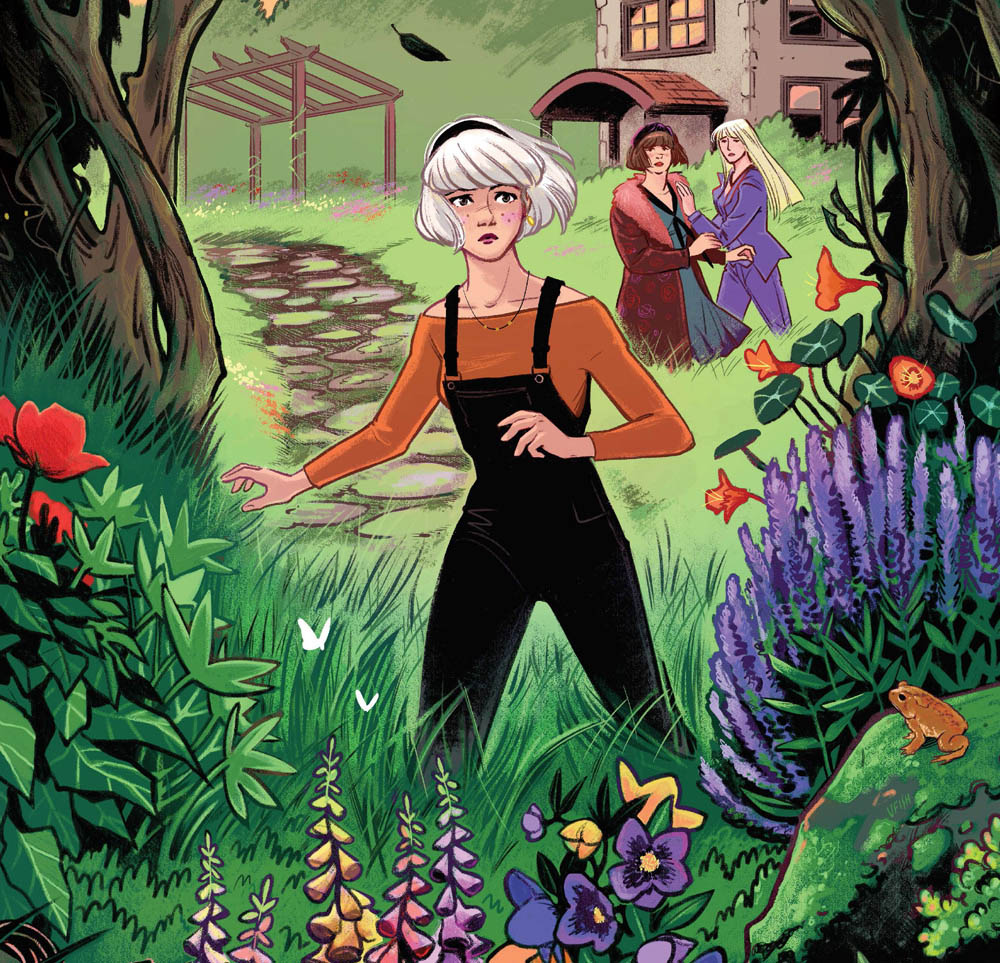 The Witch Hunt Is On In Sabrina The Teenage Witch #3

Sabrina the Teenage Witch #3 raises the stakes for Sabrina Spellman and all her friends at Greendale High! Check out our reviews of Sabrina the Teenage Witch #1 and #2 if you haven’t caught up yet. When we last left Sabrina, she was in the middle of the hardest decision of her life. Is she more interested in charming jock Harvey or mysterious biker babe Ren? Then there’s the little B-plot of students becoming monsters hell-bent on killing her and all that.

What? You thought that was the point of this book?

Hunting Witches, & Witches On The Hunt

Sabrina the Teenage Witch #3 opens right where we left off in Sabrina the Teenage Witch #2. You know the old song and dance: Sabrina Spellman, the woods, a monster. Sabrina awakens to find herself in a tough pickle. Remember Allen? He’s the shy, nerdy kid who turned into an ancient Mesoamerican God in the last book. Well, right now he’s occupied with dragging a witch through the woods. One catch: the woods are a witch’s second home.

Sabrina is able to turn invisible to escape the monster but twists her ankle in the process. She can’t keep up with a healing spell and an invisibility cloak at the same time; so, she opts for the magical band-aid and books it to the nearest sign of civilization. Sabrina finds a trailer park where she’s miraculously saved! By… Radka? Plot twist! After going from Blair Witch to Mean Girls, Sabrina finds herself in a Sixteen Candles sort of situation as Radka’s twin brother Ren gives her a romantic motorcycle ride home. Luckily, a kiss from a handsome bad boy isn’t enough to distract our girl.

Sabrina, of course, does a responsible thing and tells her aunts about her encounter in the woods. Instead of supporting her, she winds up in an all-too-familiar teenage position: adults ignoring her. The two senior witches collect their supplies and get ready to rumble. Aunts Hilda and Zelda set out into the woods to perform a different type of witch hunt: the type that ends with a feathery snake head on a spike.

This issue has an interesting focus on Hilda and Zelda towards the end. As the grown-up Spellmans realize how dangerous their baby girl is really in, they’re fast enough to act. It really exemplifies the danger that comes from grown witches when they put their minds to it. The issue closes on the image of the cloaked aunts entering the woods in the dead of night.

Who comes to a Sabrina comic for the aunts, though? As usual, the star of the world is Sabrina herself. Kelly Thompson is no stranger to the sassy high school humor that a character like Sabrina needs. Her Sabrina is an eager love letter to the character, honoring fifty-seven years of publication with a modern twist. She’s as spunky and scatterbrained as ever, always ready to try something before fully thinking it through.

Sabrina the Teenage Witch #3 also brings us some great interactions with sorcerer-turned-familiar Salem, who has been sorely lacking from the series thus far. In an interesting twist, mean girl Radka gets more development on every issue and has become a favorite of ours. She started out as a one-dimensional bully, determined to make new girl Sabrina’s life hell. At first glance, we get that she’s not what she appears to be rather literal — what with the whole one half of a wendigo thing.

In this issue, we get a closer look at her home life as Sabrina stumbles across her in a trailer park. It’s a small thing, but the fact that we see her living situation and learn that she’s embarrassed by it quickly explains so much about her character. Her arc is a standout in this series, and we’re excited to see where she goes from here.

Colors Of The Night

Veronica and Andy Fish are the power couple from Archie Comics. Sabrina the Teenage Witch #3 shows off what we’ve been saying all along is the best aspect of the series: the gorgeous nighttime scenes. The opening, in which Sabrina escapes the feathered serpent, is gorgeous. It is a world of deep blues and purples, with the vibrant colors of the monster contrasting with the scenery.

The Fishes seem to have overlaid a blue layer over Sabrina to really help her local colors fit with the palette. When she turns invisible, Sabrina becomes teal and dark green, another clever moment communicating her magic visually. Little tricks like this really push comic coloring to the next level. Art-wise, there is a standout page that defines the entire issue.

Ren drops Sabrina off at home after a crazy night of running from monsters in the woods. After a touching moment of kindness between the two, he leans in for The Kiss. Everything here honors the moment of young love. It’s devoted entirely to the visual storytelling abilities of Veronica and Andy Fish, without even Jack Morelli’s lettering to accompany it. Splashes are overused in modern comics, used to show off fancy illustrations or big establishing shots.

While this is one way to use a splash page, Sabrina the Teenage Witch #3 uses its splash a bit differently. This full page allows the reader to linger on the moment, to really appreciate the impact of this tiny moment of affection between the two. The three staggered panels at the top of the page highlight the tender lead up to the moment, with that gorgeous nighttime coloring we can’t get enough of. The main splash is an exceptionally beautiful illustration of the two characters, to be sure, but with subtle touches that leave it as the issue stand-out.

The moon framing the two, the warm-toned leaves circling them, and Ren’s hand on Sabrina’s shoulder to hold her close all lend a disgustingly romantic air to the whole scene. To put it simply, it’s romantic as hell.

Sabrina the Teenage Witch #3 Is A Must-Read!

If you’ve been waiting for the story to ramp up before getting into Thompson and the Fishes’ run on Sabrina, wait no longer. With the events of this issue, Sabrina the Teenage Witch 2019 is hitting its stride. As fans of not only Sabrina herself, but the whole team involved with this book, we can’t recommend it enough!