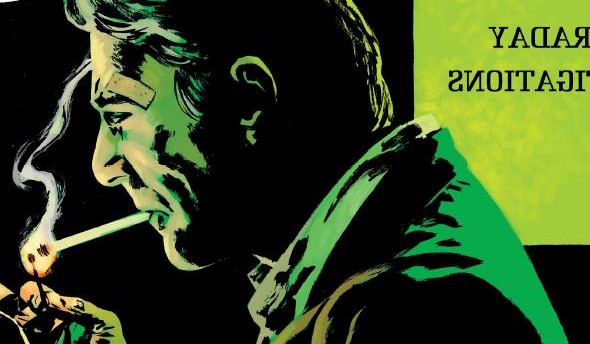 The Story Of Teeg Lawless’ Death Begins In Criminal #5

Criminal #5 begins with a story arc that has been anticipated by fans of the series for years. But in classic Ed Brubaker and Sean Phillips style, Criminal #5 does not do it the way you expect. While Criminal #5 does indeed begin the story arc “Cruel Summer” that will tell the story of Teeg’s death, Teeg only shows up for a second. This is really the story of Dan Faraday, his messed-up life, and how it all ties into Teeg.

Criminal #5 starts out with Dan Faraday breaking his promise to his client as a private investigator to chat up a woman at a bar. This woman just so happens to be the woman he was hired to track down. From there we flashback and follow Dan from the moment he gets the job to the moment he sits down at the bar. We came to understand that he’s a good tracker but not a great private investigator. Moreover, his life has been a constant state of upheaval, that he truly has no anchor to help define him. He simply does what others tell him. He was a cop after he was a soldier and took bribes. But as said by the narrator, it’s not that he was corrupt it was just the fact that he was doing what everyone else was doing.

Dan Faraday needs someone to step into his life and set things straight. Give him a goal, something to strive towards, someone to talk to. And thus, when he over the course of the investigation comes to relate to the woman in a way, he breaks his oath as a private investigator. Through Dan’s backstory, we come to find out that he is always in search of a mother figure of sorts. And his mother was not the best of people. So, this woman, who is a thief, a liar, and not a great person in general, becomes Dan’s obsession. This is a brilliant character study of someone who seems lost and needs help but devolves ever slowly into a creepy stalker mentality.

The Perfect Structure To Analyse A Murder

The way this arc is being structured by Brubaker and Phillips is fascinating. Criminal #5, of course, is the story of Dan Faraday, who set off the kill Teeg at the end of the issue. The next two issues will focus on Teeg himself, and finally, Ricky and that will then conclude the arc. While the arc is asking us the question of how Teeg died? The all the more important question is what is the context of Teeg’s death? Teeg is not a good person and has affected many people that have entered his insane orbit of a life. For instance, Dan never saw Teeg. He was whacked over the head by him from behind and blacked out. He only heard his name when Teeg continued to beat on him with a wrench.

As a result, we are seeing not only the how, the when, and the where, but the why as well. These are essential questions for any storyteller, and Ed Brubaker and Sean Phillips are answering them in a fascinating way. This is a character study, but one that doesn’t solely focus on the character at the centre. Because in order to truly understand something you must understand the different argument. And the argument is three sided, hence the three issues.

Criminal #5 is the beginning of what assuredly be one of the best arcs in this amazing series. Sean Phillips’s fantastic art sells the pathetic life of Dan really well, while Ed Brubaker’s writing shows us just how easy it is to follow the road to hell with good intentions. Plus, on the back matter, you get a roundtable discussion about crime fiction as a whole with several genre veterans.