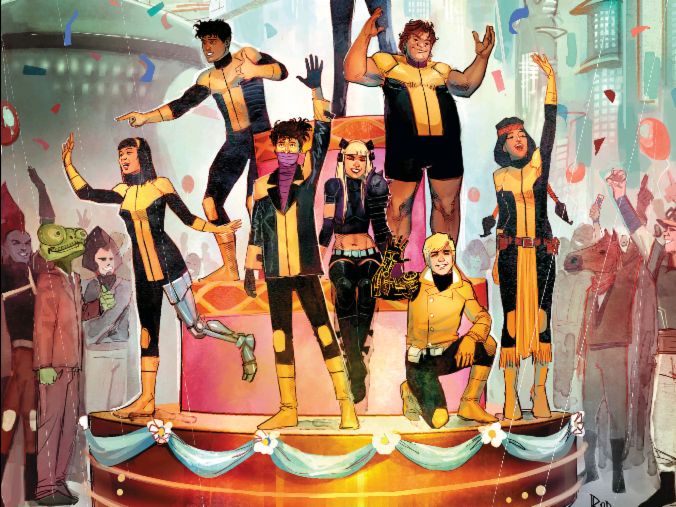 The Space Saga Comes To An End In New Mutants #7

What a wild ride this has been. Seven issues deep into New Mutants and two-story arcs have now closed, each by different creative teams. Jonathan Hickman set out with the core team for his issues and that story ends here. New Mutants #7 is written by Jonathan Hickman, with art by Rod Reis, letters by Travis Lanham, and designs by Tom Muller. Rod Reis also provides the cover.

A Recap (Of Sorts)

New Mutants #7 starts with Roberto recapping events that we as readers, have yet to even see. There are just so many text boxes. You can’t help but get the sense Hickman enjoys writing Roberto more than almost anyone else. Still, the boxes don’t take away from the brilliant artistic display from Reis. His work imbues this arc with such a unique and gorgeous flair, it’s worth the cost of admission alone.

Is it charming? Sure, Hickman’s Roberto is immensely full of himself, with a swagger that is unmatched by anyone else on the team. He comes across as being a bit less bright than fans know him to be, which is a shame. It goes perhaps a step too far when Roberto and Dani have a fourth-wall-breaking conversation in reference to Roberto’s narration. It’s worth a laugh or two, but it’s out of place and muddles the already wonky pacing of this arc.

New Mutants #7 is largely a comic where shortcuts are taken too frequently. Roberto’s “recap” and a data page that gets used to work around a fight involving a large cast are examples of why this is a bad idea. At the very least, this arc should have been a six-issue affair. Between these issues and the bouncing between the two stories with two creative teams, it’s been a rocky start for New Mutants. The real question here, I believe, is whether or not Hickman thinks what he’s doing is just funny, or was it editorially mandated to be done in such an amount of time, that it wasn’t possible to be executed any cleaner? This series is such an outlier when it comes to the Dawn Of X as a whole since it lines up with almost nothing else, minus a brief scene with Cyclops that ties to X-Men.

I do enjoy that the running theme of there always being a party nowadays is continuing here. It’s a bummer that the core team’s mission to get Sam to come back to Krakoa with them didn’t really work out, but that’s not a flaw in the storytelling. This arc could have come along later in this run and it would have made no difference in my eyes. I’m curious to see what’s in the pipeline for New Mutants down the line, nonetheless.

Should You Read New Mutants #7?

The most important takeaway from this issue, nay, this arc, you ask? Rod Reis is a damn legend. His storytelling prowess and killer character models have been a blessing here. His Sienkiewicz-inspired style was really an excellent choice to usher in this new run, no question. It’s not a bad story, but it’s not a memorable one. There’s some light fun to be had in the script, but it also feels like Hickman is just indulging himself a little too much here for the most part.

New Mutants is going to be fairly different going forward at the very least. Ed Brisson is now the sole writer, and the two teams are being mashed together instead of being split. If nothing else, I’m interested to see the new direction coming out of this weird start. Hickman will continue writing the core X-Men series, as well as the Giant-Size one-shots, which function in their own unique way. Join me again next week as we enter Nova Roma!