A documentary series that documents the lives of public servants may seem dull in passing. However, Amen Jafri the creator of The Secret Lives of Public Servants brought to life a series that is anything but dull.

This series is a collection of 3 episodes, each centered around the life of a different public servant and how they spend their spare time. The first episode airs October 31, 2017, and can be viewed on YouTube, Apt613.ca, Stareable.com and amenjafri.com.

The Secret Lives of Public Servants: Episode One

Episode one of the series is centered around Marc Adornato who works in Ottawa, Canada. By day he holds a regular job in the public service sector, however, by night he is an artist who uses different types of materials to create breathtaking art.

Marc creates a lot of politically-focused and public issue-related pieces. He is well known for his gas mask and antler pieces which can be viewed in museums and galleries in the National Capital.

Marc uses various materials to create his works. Everything from wood, various scraps and metals, anything and everything can be used in his sculptures and paintings. Below are a few of Marc’s projects. 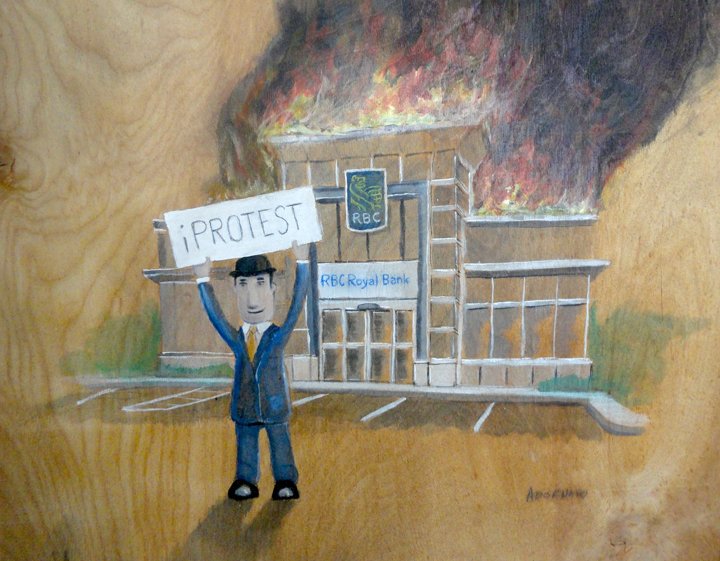 The painting above is found on Marc’s Twitter and was submitted for the RBC (Royal Bank of Canada) contest. The painting shows the RBC mascot paired with a burning RBC in the background and is part of three paintings he did for the contest. Marc discusses in the episode how the various RBC pieces represent the mascots discontent in finding out his job was exported to India. 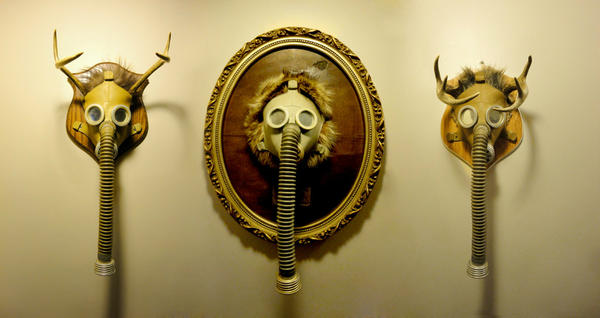 Another piece shown on Marc’s Twitter is an example of his work with antlers and gas masks. Some of Marc’s most famous works are piece such as these that showcase the juxtaposition of industry and nature.

A newer piece by Marc titled Monsanto Farming showcases the industrialization of our food and farming system. This piece can be found on Marc’s website.

The Secret Lives of Public Servants

The web series’ first season focuses on a different public servant each episode. The next two episodes to air are to focus on a comic book creator and a cosplayer. The creator Amen Jafri aims to bring light to the double life of these people, and showcase some of their amazing talents.

Amen takes a topic that can come off as dull and turns it into something that captivates the imagination and turns stereotypes on their side. Many people upon hearing of a public service worker would not think of Marc Adornato, which just goes to show the amount of assumption that can surround a person because of their job title.

Amen takes these assumptions and turns them on their head in this new documentary. Amen offers a varied and colorful view of socially deemed dull lives of public servants.

Watch the trailer for season one here! The first episode of the season airs October 31, 2017, so be sure to check it out on YouTube, Apt613.ca, Stareable.com, and amenjafri.com.