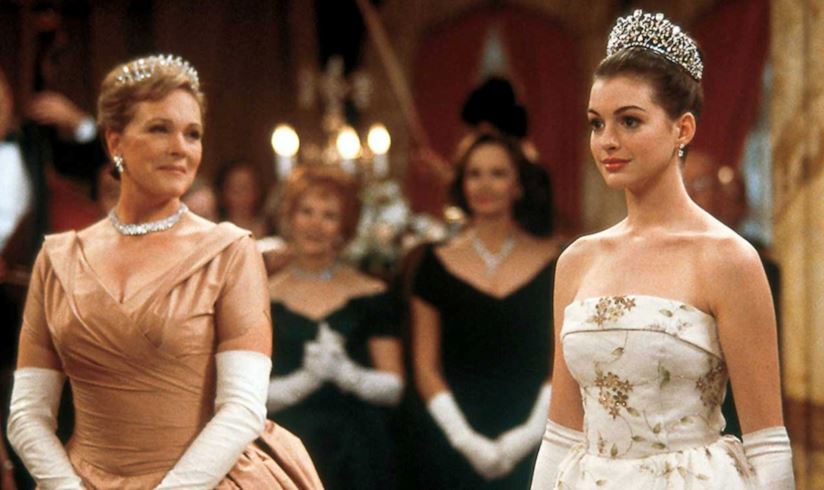 “Shut up!” Mia infamously exclaims in The Princess Diaries. Her grandmother, Clarisse Renaldi, has just apprised that she is heir to her late father’s throne. Mia immediately reacts in disbelief! After all, her artist mother raised her alone in a firehouse in San Francisco, and her “expectation in life is to be invisible.” She is an immature, 15-year-old who throws tantrums, complains, and makes self-deprecating jokes. She runs away from all her problems and expects her mother to solve them for her. How could someone like her really be a princess?

The Princess Diaries follows a 15-year-old outcast, Mia Thermopolis. Mia lives with her single mother in San Francisco. The movie is set two months after Mia’s estranged father has passed away. Mia’s mother tells her after school one day, her grandmother, Clarisse, is coming to visit. When Mia meets her grandmother for tea, she informs Mia that her late father was actually the prince of a small European country called Genovia.

Mia’s grandfather is no longer alive, and Clarisse is only royal by marriage. Mia, however, is royal by blood. Therefore, she is the only one who can take the throne as the new leader. It is up to Mia to learn how to lead, through princess training with Clarisse. Otherwise, a rival family will overtake Genovia. Mia has until the Princess Ball to decide what is more important: the life she is so used to and the person she’s always been, or the life she can have and the person she can potentially become.

At the start of The Princess Diaries, Mia is comfortable being the odd girl out. She accepts her crush, Josh Ritcher, will always choose to be with a mean-girl like Lana over her. She declares she’s terrible at everything she tries, like public speaking and gym class. At the start of her princess lessons with Clarisse, she goofs off instead of taking them seriously. When situations get stressful, Mia runs away from them. When her best friend, Lilly, bosses her around, she obeys. Mia even allows the popular kids at school to make her feel inferior.

“No one can make you feel inferior without your consent”

But this isn’t to say she’s happy this way. She still daydreams about “foot-popping” kisses. She still wishes someone like Josh would chase after her. Yet Mia doesn’t see any life for herself outside of the one she knows so well. It takes the news that she is, in fact, a royal by birth to flip her world upside down. It’s that news which helps her see that she is in control of her life. Mia has every opportunity to choose who she wants to be and what she wants to do with her life. She simply had to be open to growing up and letting go of past self-beliefs that no longer serve her.

What Can We Learn From Mia’s Growth In The Princess Diaries?

There’s a lot we can learn from Mia’s transformation. An earlier scene in The Princess Diaries shows Mia running out of a presentation. At the time, she was too nervous about speaking in front of her class. So how did the same self-proclaimed “invisible girl” garner the confidence to fearlessly address a room full of powerful, Genovian citizens?

It took a lot of personal growth before Mia could end the film flying over her kingdom in a private jet with just her diary and cat, Fat Louie. Mia had to shed her past identity and set herself free. Only then could her full potential blossom. This is something a lot of us fail to do. Either out of fear of change, or because we’re too stubborn to admit that we’re our own worst enemy when it comes to why our lives feel so unfulfilling, and we feel so ordinary.

When Mia accepts the idea that maybe her life doesn’t have to be so black and white, and perhaps she really is capable of being a princess, we see her flourish. She stops letting people push her around and she finally stands up to Lana. Mia notoriously shoves her ice cream cone into Lana’s cheerleading uniform, declaring that sure, she might be a freak, but someday she might grow out of that. Lana, however, “will never stop being a jerk.” What she hasn’t yet realized is, she’s already grown out of her old self.

In one last moment of immaturity and fear, Mia once again lets her insecurities get the best of her. She plans to flee San Francisco to avoid having to announce that she doesn’t want to be Princess because she simply can’t handle the responsibility. Before she has the chance to run away, she finds a letter from her father in the diary he gifted her. The letter offers the very advice she needs to own up to her faults and stop running from her future.

He writes, “Amelia, courage is not the absence of fear, but rather the judgment that something else is more important than fear. The brave may not live forever, but the cautious do not live at all. From now on, you will be traveling the road between who you think you are and who you can be. The key is to allow yourself to make the journey.”

“Courage is not the absence of fear, but rather the judgment that something else is more important than fear. The brave may not live forever, but the cautious do not live at all.”

It’s at that moment that Mia’s transformation is complete. She understands she was never trapped as the invisible girl who couldn’t do anything right, but instead, she perpetuated that narrative by living in fear of who she could become.

At the end of The Princess Diaries, Mia Thermopolis drives her convertible mustang through a rainstorm to get to her ball. She arrives late in soaked doc martens and a drenched sweatshirt, ringing out her hair. The Genovian citizens wait patiently, expecting her to denounce her title as princess. But as Mia takes the podium, she does something it took her nearly all 1 hour and 55 minutes of the film to learn; she takes responsibility. She delivers a compelling speech, and despite what she had planned, she accepts her title as Princess of Genovia.

The film could’ve very well ended there, but in perfect Disney fashion, we still got to watch Mia get her real dream guy, dance the night away with her friends and Genovian citizens, and then arrive at her kingdom all to the tune of an upbeat pop song reminding us all that miracles are possible for all of us as long as we believe in them.

The Real Message Of The Princess Diaries

Mia’s happy ending, though enjoyable to watch, is not what matters most about the film. What matters is the message. Too often we become prisoners to our circumstances and to our own harmful mentality. We can’t see what is possible for us so we don’t bother to test our limits. However, sometimes all it takes is taking responsibility and pushing ourselves to do better.

“You are responsible for your life. If you’re sitting around waiting on somebody to save you, to fix you, to even help you, you are wasting your time.”

With a little courage, faith, and occasionally a royal grandmother, we are all capable of growing into strong, powerful leaders. Whether that be the leader of a small European country or simply the leader of our own lives and destiny is solely up to us.