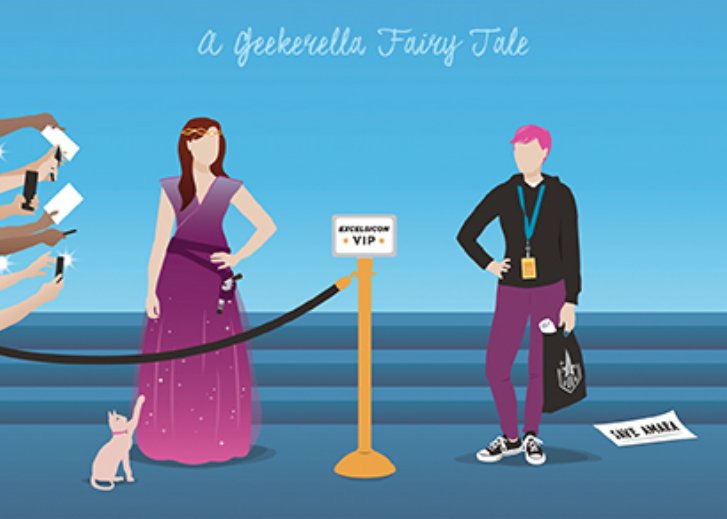 The Princess And The Fangirl: Fandom And Twain

It’s Shakespeare’s birthday month, and while reading Ashley Poston‘s The Princess and The Fangirl, all I could think about was Twelfth Night. I remember reading Twelfth Night three times for three different courses in two semesters just a couple of years ago. This book is like a product of both Twelfth Night and The Prince and the Pauper. Imagine a baby mixed with a fandom, a classic novel, throwing some celebrities in there, and adding to Comic-Con. There’s so much to love about The Princess and The Fangirl, aspects I’m sure will remind many fandom members of themselves.

About The Princess And The Fangirl

The Princess and the Fangirl brings readers back to Starfield, the fictional blockbuster franchise from Geekerella. It centers on Jessica Stone, who plays Princess Amara in the Starfield revival. She longs to leave the movie franchise world to focus on a more “serious” acting career. Enter Imogen Lovelace, a normal Starfield fangirl who gets mistaken for Jessica Stone so often that she is dragged onto the Starfield panel as a movie star.

There, she uses the opportunity to spread her #SaveAmara movement, an online petition to keep Princess Amara in the movies. Suddenly, Jessica faces an issue that could ruin her career. To resolve the issue over time, she switches clothing and lives with Imogen for a few days. Their lives change as they both come to realizations they need to solve their problems, while also gaining a happy ending to their storylines.

What Inspired The Princess And The Fangirl

My familiarity with The Prince and The Pauper by Mark Twain is nearly non-existent. Because I never read the book, I resorted to watching a video on it. After some brief research, I discovered the novel is about two boys trading clothing for a day. In the process, they also wind up trading lives. Knowing what Poston was trying to mimic, Jessica’s storyline began to make sense to me. However, because I had Twelfth Night in mind, I kept thinking of Jessica as Viola and Imogen as Olivia.

In Shakespeare’s Twelfth Night, Viola is a twin who pretends to be a man and courts Lady Olivia for the Duke. Viola falls for Duke Orsino, and Olivia falls in love with Viola’s male identity, Cesario. When Viola’s twin brother, Sebastian, returns to the picture, Lady Olivia confuses him for Viola/Cesario. The mistaken identities in Poston’s book kept reminding me of Shakespeare’s play. But even though it heavily reminds me of Twelfth Night, this book tells a whole different story. I’m certain many people who obsess over fictional worlds and characters will relate to it in more ways than one.

There Is A Lot To Love

The aspect of this book I loved the most is that both characters change by the end of the story. Jessica wanted to quit her role in the franchise. But after interacting with fans, she is finally able to understand why people love the series. Jessica realizes that her role is much more than portraying a fictional character. Imogen pushes to keep Princess Amara’s storyline going. Nevertheless, after living in Jessica’s shoes, she understands fame’s consequences and why Jess doesn’t want to reprise the role. I love it when characters noticeably undergo a change in identity, also a heavy theme in Twain’s novel.

Jessica’s realization, however, is what makes me relate to this story. She talks about how similar she is to Princess Amara, and how she is the best part of that character. She also describes Starfield as a story that tells things to her, a kind of story that wins hearts. It’s how we all feel about a series, characters, movies, and perhaps even celebrities we obsess over. The other part I adore about the love for fictional worlds in this book is that there is no shame in loving them. Liking certain characters or shipping an unpopular pairing is not something to be ashamed of. Guilty pleasures don’t exist, it’s just pure pleasure.

What Was Not To Love

One small part that really bothered me was when Imogen crossed her fingers while promising something. Who does that anymore? I just thought it was a bit childish. Additionally, another issue I had was how the characters’ voices were quite similar. You can usually tell them apart, but there were instances when I was unable to. The only way I could differentiate the two points of views was by references each character made.

Imogen makes fandom references to describe people and Jessica is not a fangirl of any sort. Therefore, it was weird when Jessica made a Hufflepuff reference. Imogen had been the one identifying people she met at a Hogwarts house. I had to go back and make sure I was reading through Jessica’s point of view.

I read Geekerella because I wanted to check out The Princess and The Fangirl. While reading Geekerella is not necessary to understand this book, it’s a better experience knowing some of the characters beforehand. Like Geekerella, this book is separated into parts by black pages. Each divider contains a short quote from the Starfield scripts. For me, the story doesn’t pick up until after the first divider. It was slower this time and there were many moments at the start where I kept putting the book down. It took me days to get through the first part but only two sittings for the rest of the book. Despite the story’s slow start, my patience positively paid off. I’m glad I read all the way through.

Poston’s book reminds me of Fangirl by Rainbow Rowell, another novel about a character obsessing over a franchise with a cult following. Whereas that story focuses on a fandom and the main character writing fan-fiction, this has the best of all worlds. It mentions clothing, selling fan art, a petition, panels, signings, photographs, and even ship names. Come on, you know you have an OTP! The Princess and the Fangirl and its characters’ development is both nostalgic and still relates to my present fangirl self. This companion novel will certainly make readers smile as they realize these characters are just like us.