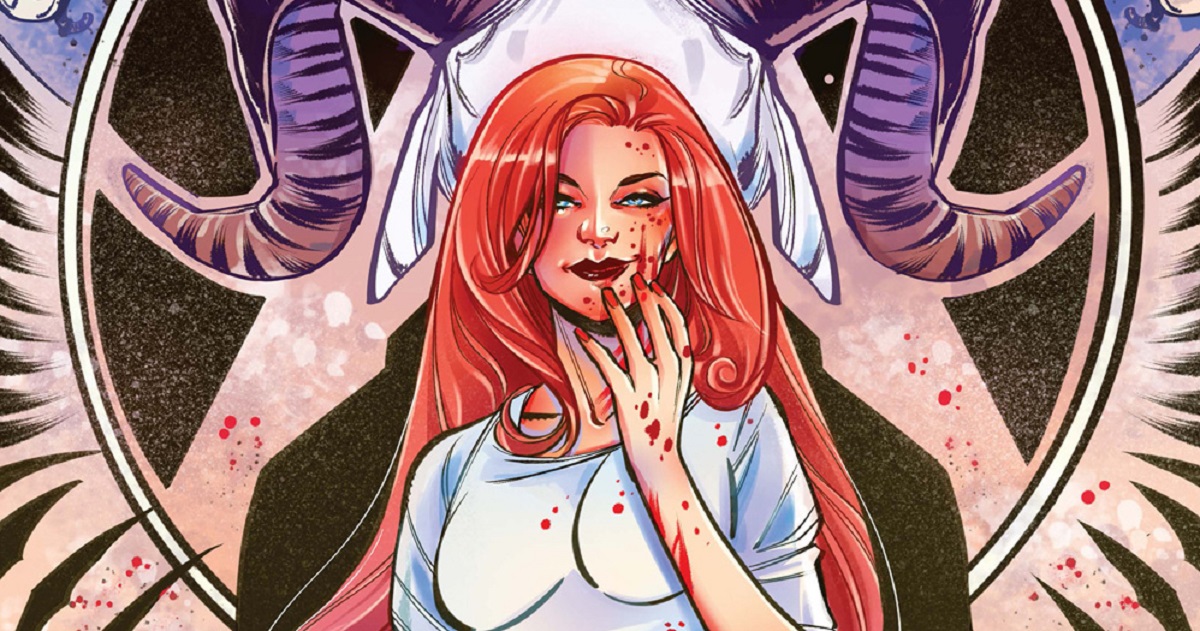 It’s Monday morning in Blossoms 666 #2 at Riverdale High, but something doesn’t feel right. Two of the teens have gone missing. Both Ethel Muggs and Reggie Mantle are gone, and the last time anyone saw them was at a wild party at Blossom Manor. We last left Riverdale in the don of a new dark era, with the rise of the Antichrists. Both Cheryl and Jason Blossom are competing for the title and no one will stand in their way.

All the characters were introduced as pawns in the Blossoms game that started at a wild party. Blossoms 666 #2 sends readers to get to see the aftermath of the event and also a glimpse of what happened right after the cliffhanger of the last issue. Let’s open the doors and take another trip through Blossom Manor in this newest issue.

Blossoms 666 #2 begins at the Blossom Manor early Saturday morning. It’s the day after the wild party and Cheryl is coming back from a run. Jason meets Cheryl and discusses the events that happened the night before. The comic then cuts to Monday morning in Ms. Grundy’s class where Ethel Muggs and Reggie Mantle are both absent. When Dilton hears the news, he sprints out of class and begins to vomit. Betty later confronts Dilton in the hall to find out what happened, but he gets nervous and walks away.

Betty, though, began to question recent events and decided to look for the missing students. In the woods, she comes across one of the missing students acting very distraught. During this event, Betty suddenly stumbles upon a very grim sight. At this exact moment, the Blossoms are sitting in their mansion discussing what they should do about Betty. She is snooping excessively and it has to stop as soon as possible. As they begin to plot Betty’s demise someone walks into the room. A shadowy figure reveals himself and the character is really going to shake things up in the Blossom household.

Art Of Blending In

The art in this book is a little different from the previous issue. In the prior issue, most of the colors are muted with only the reds being luminous. It set up this bleak dark world that would be seen in a horror movie. Blossoms 666 #2, on the other hand, kept the same art style but changed the color palette. Instead of making the Blossoms stand out in this issue they blend into the crowd. As all the colors are illuminated, it is a bit sad that the palette has changed, but there may be a reason for this.

In this issue, both Cheryl and Jason are trying to stay under the radar after the disappearances of Ethel and Reggie. They act like nothing is wrong and hope the students are found soon. The art is possibly reflecting this by making the whole book luminescent instead of just a certain scene. To make readers know that these characters are trying to act like everyone else in this issue. It brings up the question of whether all the issues’ colors going further will try to convey how the Blossoms feel at that point. By seeing the colors this way, it actually makes the book even better visually.

Throughout the story, the comic gives the reader glimpses of a shadowy figure. He is placed at the most random places either walking about or watching others. This shady character looks a bit sinister in the ways the artist keeps them in the shadows. One of the best moments with the individual comes with a close-up. The reader sees a little more of the character and at first glance, it looks like they have glowing red eyes. In actuality, in the end, those red eyes are actually eyebrows. It’s a great use of color and art within the book that makes the book stand out.

Detective Cooper On The Case

Betty Cooper is an interesting character and is always written very well. Always helping any way she can or just being the clever character. In Blossoms 666 #2, you can see that this character will be the detective of the series and find out what’s going on. She is the first one to question the Blossoms and go looking for the missing students. Now with what she discovered, it’s going to be interesting to see what the next move will be.

Will we see her convince everyone to help her or will she go into this mystery alone? It’s going to be interesting to see how she will react finding out about the Blossoms’ secret. She is reminiscent of the version of Betty on the show Riverdale, with questioning events and solving mysteries mostly on her own. Let’s just hope this version is done correctly and not written so outlandish.

As the book is eerie in all of the best ways, there is one scene that is really scary. Cheryl and Jason came home after school to find a police officer waiting for them. When the officer is questioning them, Cheryl acts like she has no idea what happened to the students. Cheryl then lightly touches the officer’s hand. He decides to leave and he tells them that he is here to serve as the next antichrist. It’s a shocking scene and it comes out of nowhere.

It makes the reader think of how many people are connected to the Blossoms. Is Riverdale in this universe one of those creepy children of the corn towns where almost everyone is a Satanist? Betty Cooper may have some work to do to solve this case now. It may not be terrifying in the usual way, but it’s pretty scary to know that there are other Satanists in Riverdale and they all help each other no matter the cost.

Pieces Of A Puzzle

A great moment in this issue is right at the beginning of Blossoms 666 #2, page one to be exact. Readers get a glimpse of someone washing blood off their hands in a sink. This is reminiscent of the first page of issue one. In the last issue, there was a body covered in a sheet in a morgue with some blood seeping through. It’s a great set up for the issue because it gets readers into the dark tone of the book.

It’s also a reminder of the show How to Get Away with Murder. The show does the same thing at the end of an episode. It shows a scene of an event that occurred or will. Then at the end of the series, all the scenes come together. This series may do the same, which will be exciting. A theory that if the writer does this is readers will see all the events that happened at the Blossom’s party in real time. Still, who knows what the writers may have in mind for other plans in this series?

This issue is one of the reasons why the Archie Horror line is amazing. Writers and artists are able to do something new with these beloved characters and it looks like they could go pretty far. Since this is a whole different universe no one is safe from the Blossoms wrath, which is exciting. Anyone in the Blossoms 666 series could be next, and with Ethel and Reggie missing the story could only get crazier from here. Now we have Betty looking for answers and a new sinister character. Could this person be a friend to the twins or is he much worse? Sadly, we have to wait until the next issue. We may need to shut the doors of the manor for now, but it won’t be long until the doors are opened again.