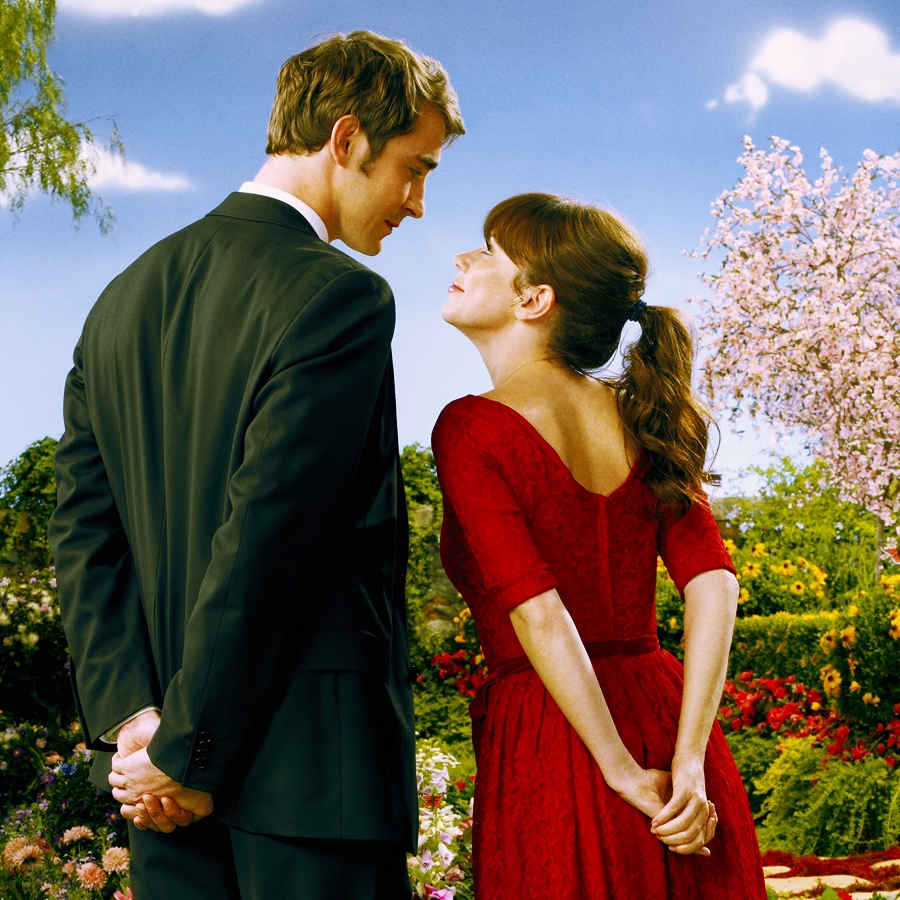 Welcome to Bae Watch Wednesday, where I tell you all about the fictional characters you ought to be crushing on. Our inaugural Bae is a man of mysterious circumstances, delicious food, and an enchanting smile: Ned the Piemaker from Pushing Daisies.

Who is The Piemaker?

If you’ve never seen Pushing Daisies, you’re missing out. The show, created by Bryan Fuller, ran on ABC from 2007-2009. Its cancellation is one of the gravest sins of the television age. Pushing Daisies tells the story of Ned, a mysterious man who has the power to bring the dead back to life with a single touch. There’s a catch though: he can only bring them back for one minute, or someone else has to die in their place.

Ned also cannot touch a dead person more than once, or they will go back to being dead. He learned this lesson in the most heartbreaking of ways: as a child, he brings his mother back to life, only for her to die again giving him a goodnight kiss. Ned has a lot of baggage from this experience. His father is incredibly distant and ships Ned off to boarding school, never to meet again. Ned has two comforts in life: his dog Digby, who is alive-again at Ned’s hand, and baking. Ned’s mother used to bake pies, and he takes up the habit to remember her.

As an adult, Ned opens The Pie-Hole (as in shut yours), a restaurant that solely serves pie. The Pie-Hole struggles financially until Emerson Cod, a private investigator, discovers Ned’s ability to bring back the dead. Emerson realizes that it would be a whole lot easier to solve murders if you could ask the victim who killed them, and Emerson and Ned begin a lucrative partnership.

Life is interesting, but relatively stable until Emerson and Ned investigate an unexpected death. The victim, “lonely tourist Charlotte Charles,” is Ned’s childhood crush. He cannot bear for her to die again, so he sneaks her out, even knowing that he has now killed someone else to keep Chuck, as he calls her, alive. Emerson is, understandably, peeved at Ned’s actions. Chuck is adrift, both dead and not-dead, unable to live a normal life or contact her family. Her only anchor is Ned, and even that relationship is fragile since they can never touch.

The show follows along as Emerson, Ned, and Chuck, along with Pie-Hole waitress Olive, investigate various outlandish murders. The show is vividly gorgeous, with bright colors and sets. Each episode tells a contained story about an individual murder. However, the show also focuses on larger story arcs. Ned’s family baggage, Chuck’s uneven place in the world, and the fear of exposure are major storylines. Smaller storylines focus on Emerson’s missing daughter and Olive’s unrequited love of Ned.

Pushing Daisies was canceled after only two short seasons. Unfortunately, because of this, many of these storylines are either not resolved or quickly wrapped up in the series finale. Fans still ask for Pushing Daisies to return a decade later. Whether or not we get the closure, we deserve, however, we can agree that Pushing Daisies was something amazing — something different and unique in a world where so much of our entertainment is cookie-cutter.

Why is The Piemaker Bae?

First of all, look at this smile:

I don’t care how shallow it makes me seem, but Ned is the downright cutest person I’ve ever seen. When he smiles, I swear, the sun comes out, and everything is bright and cheery. Ned’s physical attractiveness is a significant component of why he’s Bae.

He’s a very snazzy dresser, too. Fun fact: the showrunners dress Ned almost exclusively in blacks and grays to contrast with the technicolor look of the rest of the show. It’s supposed to represent his connection with mortality, but it also makes him stand out (in a good way).

Aesthetics aside, though, there’s a lot to like about Ned. First of all, he’s the Piemaker. He owns his own bakery and sells pies in honor of his mother. How cute is that? His pies are extra special because he uses rotten fruit, brought back to full freshness with his unique touch. Despite how gross that sounds, the show makes it clear that this makes his pies outstanding.

Ned is an emotional baker. He bakes to remember his mother, but he also stress bakes. It’s fun to watch a male character be given the freedom to not only do a feminine activity (baking) but to do so to deal with emotions. There are minor moments in the show where this is a source of mockery. At one point, Emerson remarks that Ned cannot go to jail because he’s pretty and he bakes. However, for the most part, Ned is respected as a great baker. People love his pies.

Ned also turns his emotional outlet into financial success. While granted, the Pie-Hole was struggling before he teamed up with Emerson, the restaurant is clearly successful in the show. Baking is such a fundamental part of who Ned is. He bakes for emotional reasons, but also for practical reasons. He loves his business, and he’s successful. You gotta love that.

Ned is also adorably awkward. He’s not a smooth-talking, suave and debonair man of mystery. He stumbles over his words and says goofy things. He’s not a cool kid — but he makes it work.

Ned fully embraces who he is. He has a lot of emotional baggage from his unconventional childhood. Not only did his mother die and his father abandoned him, but Ned had to deal with his special “gift,” always wondering who he would accidentally kill next. The first person he accidentally “kills” is Chuck’s dad, sacrificed (unwittingly) to save Ned’s mom. This haunts his interactions with Chuck until he eventually confesses.

Ned also struggles to understand his “gift,” doing experiments to see what his limitations were. He had no friends and was unable to find a niche in school. It’s not until he becomes an adult that he gains friends and a sense of purpose. Working with Emerson is a mixture of creepy and fun. He gets to use his “gift” for good, even if the good is mostly monetary.

Ned is romantically awkward as well. He and Chuck can form a relationship despite the major stumbling block of not being able to ever touch. Their relationship is based on mutual affection and romantic gestures rather than physical chemistry. Ned brings Chuck’s beloved honeybees back to life after a colony collapse, even though that means touching hundreds of bees. Their love is squee-inducing and the cutest thing you’ll ever see.

In the end, Ned is unashamedly who he is. He’s the Piemaker. He wakes the dead and solves crimes. He always gets into some wacky shenanigans with Emerson, Chuck, and Olive along the way. Ned takes things as they come, even if he’s not thrilled about it. Growing up with his special “talent” taught him that life was going to be unpredictable and often unfair, but that he needs to live it anyway.

Watching Ned stumble through life is inspiring and entertaining. He’s just another person trying to figure out this crazy world. Granted, his world is a little crazier. But Ned is relatable. Raising the dead aside, he’s just a major dork with emotional baggage and strange relationships. He’s got it all — looks, nerdy charisma, and a bakery full of delicious pie.