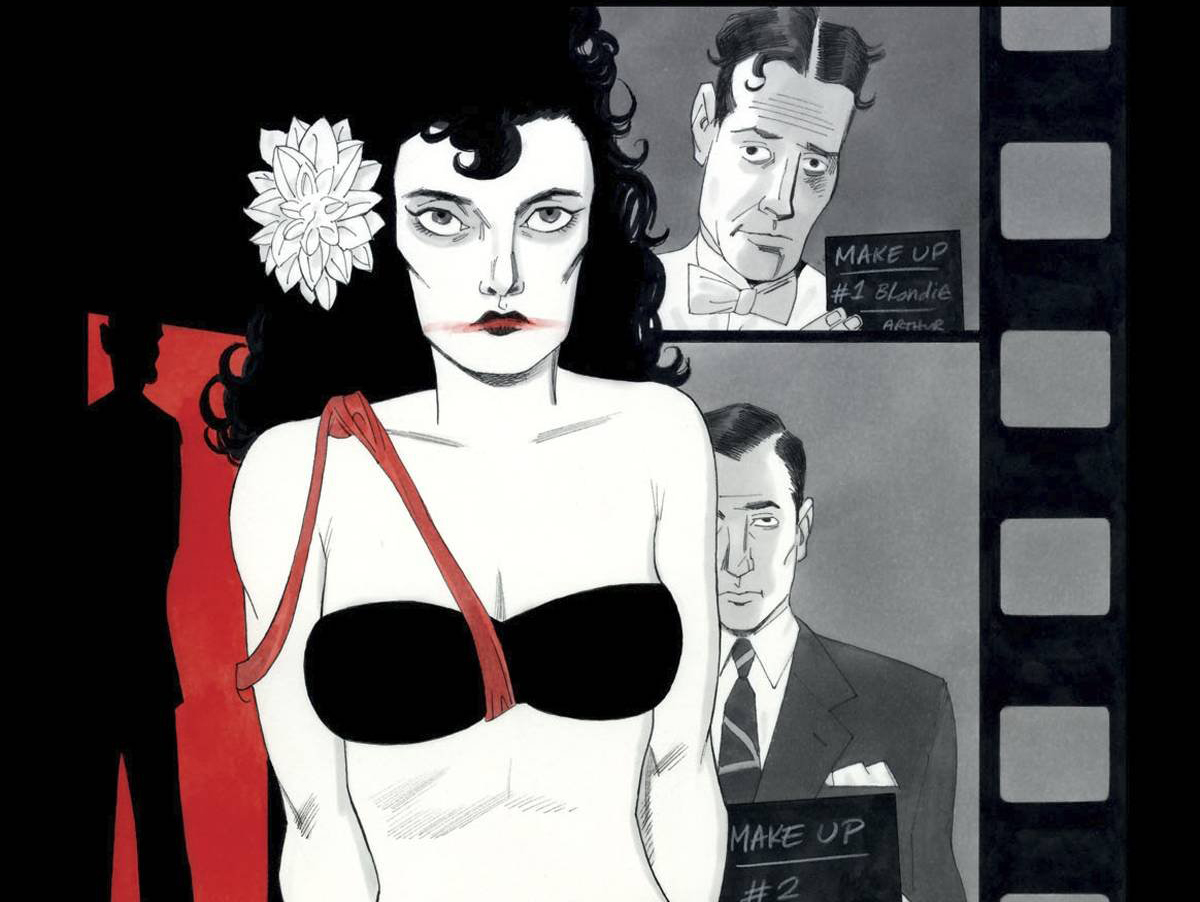 The Lucid Horror Of Cinema Purgatorio

Cinema Purgatorio is a horror/sci-fi comic anthology curated by Alan Moore. Having run 17 issues over two years, the series features an introductory story in the form of a fictional film and four serial stories. The final issue drops in May, with all the stories set to reach their conclusion. Now is as good a time as any to look back on the series as a whole!

Each issue opens with the titular Cinema Purgatorio, penned by Moore with art by Kevin O’Neill. An unidentified woman waxes poetic about her life as we walk, from a first-person perspective to our seats. Each “film” is an account of a real person’s life told through a fantastical lens. Characters in these shorts include George Reeves, the Black Dahlia, and Willis H. O’Brien, whose life story is creatively told by King Kong.

The introductory biopics are the highlight of each issue. Each story is told with the precision of a master author. The black and white artwork by O’Neill is striking, harkening back to the days of vintage horror comics. If you’re a fan of true crime or dark history, Cinema Purgatorio is worth a read for the introduction alone. Throughout the series, Kurt Hathaway provides precise lettering and Juan Rodriguez colors the covers of each story.

Code Pru is a dark horror-comedy by Garth Ennis and Raulo Caceres. Here, the titular Pru is a big-city first responder, working as a paramedic. She’s smart, confident, and ready for anything. At least, she thinks she is before she meets a suicidal vampire. The series follows Pru as she secures, contains, and protects, the paranormal residents of New York City.

Ennis’ wit is as sharp as a vampires fangs in Code Pru. His characterization is at times funny, charming, and tragic in a beautifully bizarre way. Pru’s youth is a perfect example of this, but I won’t spoil one of the funniest and saddest parts of the whole series for you.

Caceres brings the paranormal world of New York to life with his expert eye for detail and intentional application of tone. His art revels in the contrast of fine line texture and deep black shadow. Black and white art like this can become illegible quickly, but Caceres’s purposeful treatment of light and shadow makes each panel perfectly clear.

Modded is Cinema Pugatorio’s loving mashup of Pokémon and Mad Max. Ignacio Calero and Nahuel Lopez have both offered art to the series, with Kieron Gillen in the driver’s seat as the writer. Modded tells the story of a young girl trying to catch ’em all in a post-apocalyptic hellscape. At the start of the series, she loses her only companion, Fluffbumble, and joins forces with a fellow daemonatrix to get him back.

The two girls travel across the desert to confront Tommy Zero, one of the best characters in the whole damn book. Gillen brings his trademark humor to the story, which is the only straight comedy in the whole anthology. The characters are fantastic, with the heroine Fringe’s naïve positivity contrasting with everything around her. Her excitement for the world around her is infectious and makes the reader want to explore just as much as she does.

The front half of Modded is illustrated by Calero. While he is clearly a skilled artist, he leans much more heavily on the gritty, apocalyptic aspect of the story. Calero isn’t afraid to give a character an ugly expression or to take the extra time to render the veins of an eyeball popping out of a socket. Lopez’s work is much more cartoony, with wider areas of negative space and high contrast between extreme light and dark.

His characters are much cuter, for lack of better phrasing. Fringe goes from Calero’s grubby gremlin child to a pouty-lipped cutie patootie under Lopez’s pen. I just love her a lot, okay? While I personally prefer Lopez’s approach, Calero’s work on the series is absolutely stunning. His creature design shines through as the most impressive aspect of Modded as a whole.

Max Brooks and Gabriel Andrade team up to tell the painstakingly researched story of A More Perfect Union. The historical sci-fi took place during the American Civil War, but with a twist. Rather than the North versus the South, the States are up against a much greater threat: giant ants. Brooks gave no explanation for the invasion, choosing instead to focus on the exploits of real-life generals and soldiers.

A More Perfect Union has seen the biggest artistic changes in Cinema Purgatorio throughout its two-year run. Michael DiPascale opened the series with painterly grey tones, setting the series apart from the other stories in the anthology. Gabriel Andrade took over in issue 8, lending his graphic style to the story. Both artists contribute to and suit the story in unique ways. While Andrade’s technical gels with the rest of Cinema Purgatorio, DiPascale’s use of tone sets the series apart in a good way. It sets A More Perfect Union in a certain time and place and reflects the historical fiction genre very nicely.

The story itself is the weakest in Cinema Purgatorio. The chapters aren’t as distinctly connected as the other stories, instead of skipping around to different characters on the front lines. The narrative is spent spotlighting different historical characters, inventions, and events through the lens of its alternate history. However, even if you’re not a die-hard history buff, Brooks is sure to include a little snippet at the end of most chapters explaining the real historical moment he’s drawing inspiration from. While A More Perfect Union is at the bottom of my list in the context of the series as a whole, it’s still a pretty crazy read.

The Vast Of Cinema Purgatorio

The Vast is a loving homage to the Kaiju genre. Christos Gage and Gabriel Andrade tell a post-apocalyptic story of heroics, friendship, and kaiju raising on the front lines.

Andrade is up to bat once again. Major props to him for taking on two stories at once in the same anthology. While his work in A More Perfect Union is passable, he really shines in The Vast. His attention to texture and weight is on display in full force. The monster designs are not only creative but surprisingly expressive. They are able to be scary, disgusting, and adorable in the space of just a few panels.

Andrade also shows off his chops with character illustration, showing highly expressive human characters right alongside their Kaiju counterparts. Gage’s story feels both familiar and refreshing. The Earth has been nearly destroyed by alien beasts, and the remaining nations of the world are battling for control. Among the soldiers are those who bond with newly-born Kaiju, training them to fight alongside people. The relationships built between trainers and their beasts are the driving heart of the story, beautifully detailed with small character beats. Together with Andrade’s artwork, The Vast is a solidly told story.

Cinema Purgatorio As A Whole

Cinema Purgatorio presents itself as a horror anthology, though that isn’t necessarily the case. Most of the stories have horror conventions, like monsters and supernatural elements, but none are exceptionally scary. If anything, the series offers something like a lucid dream. Subsequently, the reader is aware that they’re reading a horror comic, but can’t bring themselves to get scared. As such, they are in a state between fear and calm. An anxiety over what could be lying on the next page.

The art of the anthology series is a waning one. As such, hungry fans are desperate for content. The Kickstarter launched in 2016 and earned Avatar Press over one hundred thousand dollars to keep the project moving. From those humble origins to today, the month of its final issue, Cinema Purgatorio has proved the value of anthologized comics in a modern market.