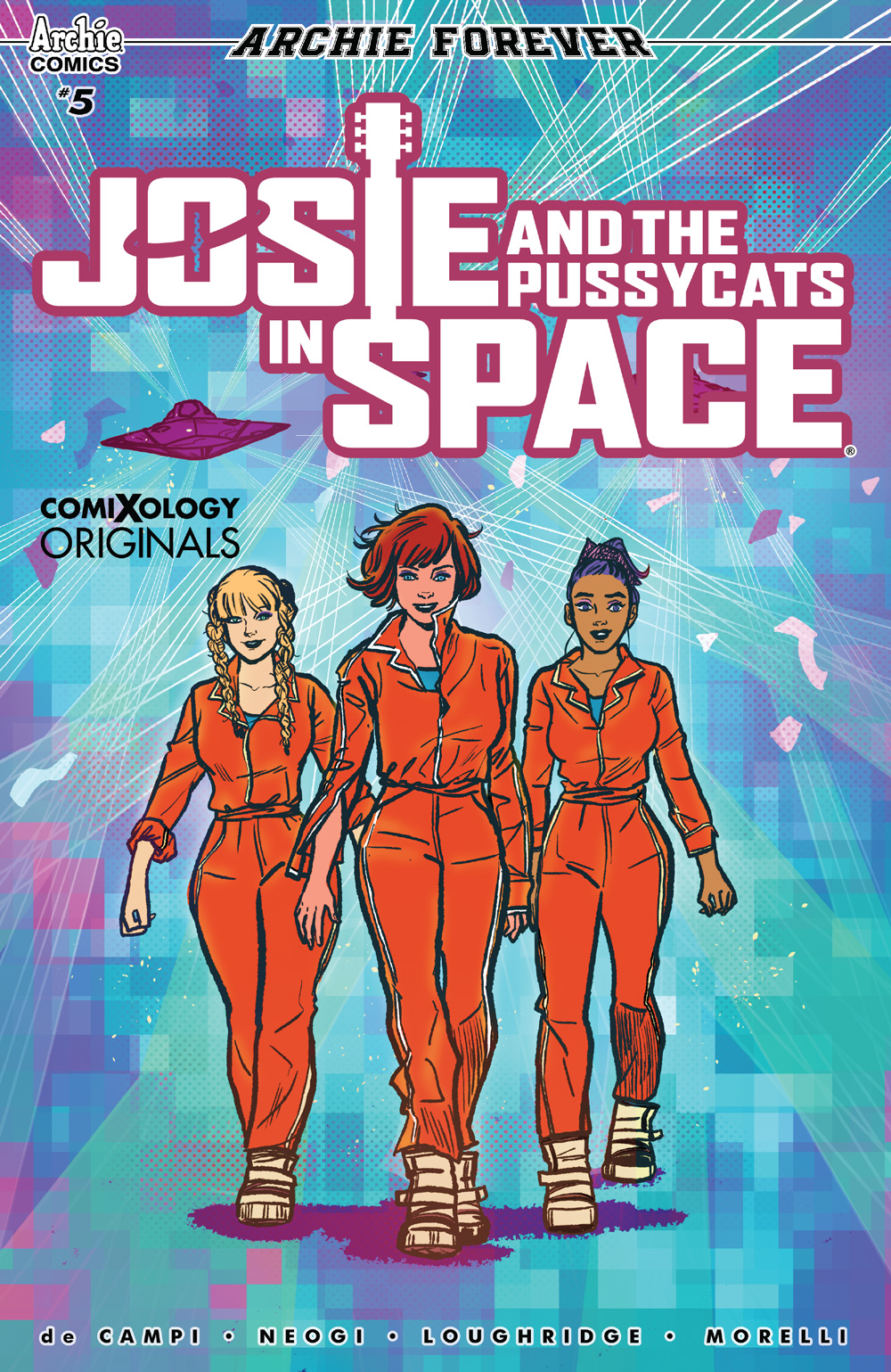 Being lost is a horrible experience for anyone, but being lost with a bloodthirsty alien is truly terrifying. Josie and the Pussycats have toured around the world and back. They’ve faced record producers and high school exams but nothing could have prepared them for this journey. For the past few months, the Pussycats have been on tour in space.

The Last Plot In Space

Josie and the Pussycats in Space #5 begin right where the last issue left off. Melody is being smothered by an alien, and Josie is flying through space. Alexandra pulls out a gun shoots the alien’s tentacle and Alan grabs Melody. Valerie tries her best to grab Josie but cannot get close enough. Alexandra tells Valerie that they will grab Josie after they head to the ship. When they reach the ship, Valerie demands Alexandra to save Josie. Alexandra assures her that her brother is retrieving her right that second. At that moment in space, Josie transforms into an alien and is about to attack Alexander’s ship.

As he gets closer, however, she turns back into a human form. He takes her back to the ship and the band has a happy reunion. Alexandra then talks to the group with her Captian as the group tries their best to debrief. The Captain tells them that this ordeal that only felt like a few days was actually ten years. Josie begins to think that the bands have been forgotten.

In actuality, they became legends and are more popular than ever in space. The group decides to finish the concert tour, but do a small interview before they go on stage. During the interview, Melody leaves to meet Alan and talk. During their chat, they are about to kiss when something horrific happens. The series ends very creepily with Melody running after Josie to meet her on stage.

This series has been a mixed bag from beginning to end. It couldn’t focus on if the story being told was a sci-fi horror epic or a Sci-fi story with comedic elements. Reading this last issue, the elements of action, mystery, horror and evil alien attacks everywhere that make it an epic sci-fi story.

With those elements, the issue works so well, it’s just as good as the first issue. If the series followed this formula the whole way through instead of mixing genres throughout this series could have been something magical. Instead, readers are left with what could have been. This could have been another hit for Archie Comics but the series got lost along the way. It’s fantastic that it found its footing, in the end, to close out the series right, but it feels too late.

A Huge Problem That Spans A Decade

As Josie isn’t herself anymore this makes sense for her, but nothing is wrong with Melody or Val. It feels odd that they would be okay with going back on stage after everything. Again, if the series was longer, the book could have explored more of these plotlines and made the story work. It makes the whole group seem like they don’t care about anyone, but themselves.

If there were more development with the girls maybe this wouldn’t be as big of an issue. Readers don’t even know why they left on tour in the first place. There are so many questions left unanswered. With now a time skip with no reaction, it makes the series seem a bit rushed and unfinished. There was hope that this issue would tie up the loose ends but sadly it did not.

Final Thoughts of Josie and the Pussycats In Space #5

In the end, Josie and the Pussycats in Space was not a terrible series. There are many good elements sprinkled throughout. The best issues though are the first issue and Josie and the Pussycats in Space #5. Both of these issues focused on sci-fi horror and it works so well because they stick to that genre. If the series just did this, then we would have a great story, no questions asked. This series is left up in the air like many old sci-fi movies from the 1970s which is awesome but doesn’t work as well as it should.

If this series was at most ten issues I feel everything would have worked. Characters could have been developed better and we as readers could have felt more of a connection. Mainly though I was happy that Melody finally talked a bit more about her panic attacks, which was amazing. Still, as a fan, I should have left this series wanting more, but sadly I was left with a ton of unanswered questions. If you’re looking for a comic with Sci-fi elements and great horror art look no further. The story may not leave you wanting more, but it’s a good read if you are in the mood to read a comic that doesn’t focus on superheroes.

The Final Journey With The Pussycats In Josie And The Pussycats In Space #5
PROS
Awesome Sci-fi Horror
Terrifying and Creepy Ending
CONS
Underdeveloped Characters
A lot of Unanswered Questions
80
THE FINALE...