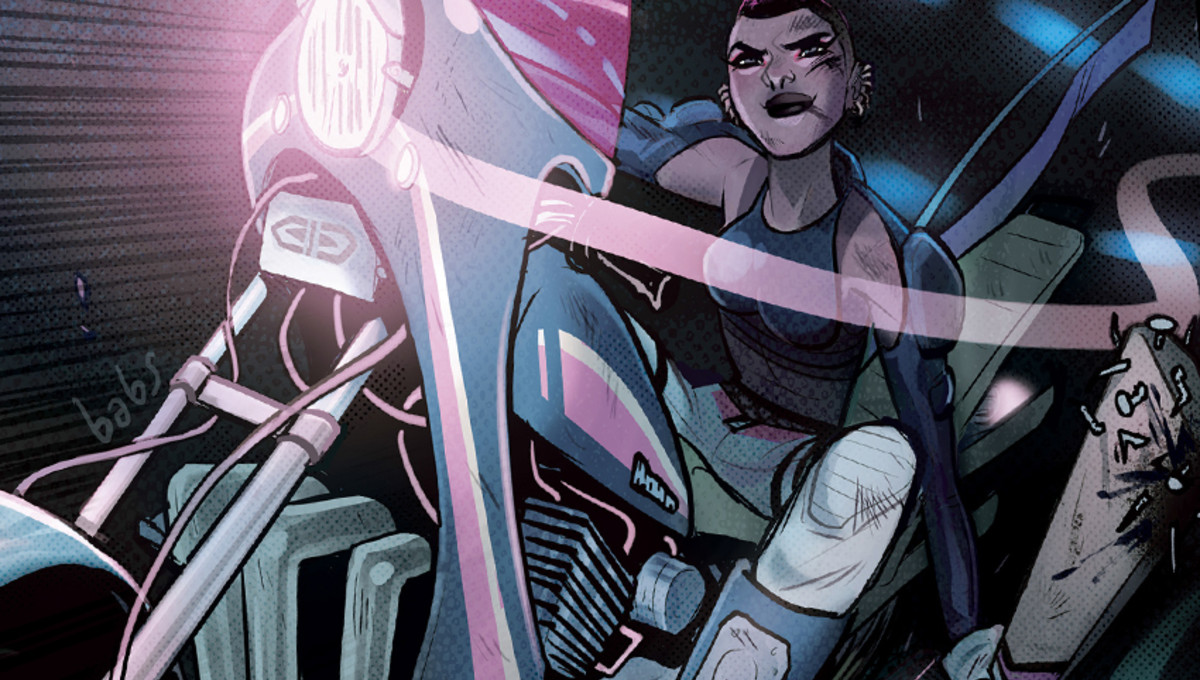 The Engines Are Revving And Raring To Go In Motor Crush Vol. 1

It’s not every day that a comic provides fans with the same adrenaline-inducing excitement that an action movie does. Then again, it is not every day that a comic like Motor Crush Vol. 1 comes around. Do you enjoy a series with a diverse cast, beautiful artwork, and suspenseful storytelling? If so, here is why you should pick up Motor Crush Vol. 1 by creators: Brenden Fletcher, Cameron Stewart, and Babs Tarr with assistance from Heather Danforth (colorist) and Aditya Bidikar (letterer).

The Plot Of Motor Crush Vol. 1

Motor Crush Vol. 1 takes place in the technologically-advanced city of Nova Honda, where motorcycle racing is the area’s favorite pastime. Readers follow rising race star, Domino Swift, as she trains with her father for the World Grand Prix (WGP). During the day, Domino spent hours improving her racing times for the WGP. However, under the cover of night, she participates in the illegal street races – Cannonball.

Domino rides in these Cannonball races in order to win an engine-boosting stimulant called Crush. This stimulant overworks the engines in motorcycles to make them run at incredible speeds. However, Domino does not race to win Crush for her engine; she wins them to keep herself alive. For some reason, Domino’s body craves and maintains itself on Crush (a substance which causes death for anyone else that consumes it).

The question regarding why she can consume Crush without dying has haunted Domino all her life. With no answers coming from her father, Domino makes it her mission to find out who/what she is and where she comes from. And when a mysterious motorcyclist who seems to know the answer suddenly appears, Domino may finally learn: Just who is Domino Swift?

Perhaps the best attribute of Motor Crush Vol. 1 is its artwork. The creators pull out all the stops in making the series as aesthetically pleasing as possible. One way they do this is through their settings. For example, the settings change depending on whether Domino is training for the WGP or for Cannonball. If she practices for the WGP, the artwork features a bright, shopping-center environment while during Cannonball it becomes an ominous “underbelly” surrounding. Along with the city designs, Motor Crush Vol. 1 displays breathtaking art for natural environments, ranging from beachfront to mountain views.

Another plus for Motor Crush Vol. 1 are the beautiful character designs. Readers never wonder what a character is feeling due to the fluidity of their facial features. When a situation calls for fear, they look scared, and the reader believes this thanks to their well-drawn expressions. The series also features characters with an array of body types and skin tones. Domino Swift is black and has a fit build thanks to her training. Lola (pictured above), Domino’s mechanic and ex-girlfriend, has a curvy body and her coloring is just to die for.

In general, the coloring within Motor Crush Vol. 1 by Heather Danforth is what brings the art to life. She uses mostly pastel colors throughout the comic, but Danforth’s neon coloring reinforces the technologically-advanced atmosphere of the series. Of all the colors, shades of pink are the most prominent but do not let the innocent color fool you. Danforth manages to make pink an ominous marker; especially whenever the story features Crush, which is neon hot pink.

The action scenes within Motor Crush Vol. 1 consist of mostly motorcycle races. However, depending on the type of race, WGP or Cannonball, they present different stakes. In the action scenes at WGP, readers receive wonderfully detailed designs of the motorcycles and race track. The creators make a painstaking effort to get across the magnitude this opportunity carries for Domino and her father. Due to the small size of their business, the WGP can launch Domino’s career. Therefore, these action scenes emit a similar feeling to those underdog films where a reader just wants to root for Team Swift. However, these races come across as fair and clean, contrary to their nightly counterparts in Cannonball.

When involved in Cannonball, these action sequences take a dark turn. The previously praised artwork genuinely brings these no-holds-barred street races to life, for, unlike the WGP races, these races get grimy. Anything goes during Cannonball: driving at maximum speeds, using weapons and projectiles, knocking off fellow cyclists, etc. Since Cannonball occurs at night, the addition of light streaks across the page emphasizes just how fast and dangerous they can be. These races keep readers on the edges of their seats as they emphasize just how far people are willing to go to win the Crush.

In contrast to the blood-pumping action, Motor Crush Vol. 1 offers readers some heartwarming and complex relationships. For Domino, her relationship with her father and Lola motivated her the most throughout the volume. Her father adopted her as a baby (something Domino has known her whole life). Due to this fact, Domino does not know where she comes from or why her body needs to consume Crush. Her father seems to know the answer but refuses to tell her for her own safety. Throughout the volume, readers can see how much the two care for each other, but these secrets strain their relationship. Nevertheless, when they are not talking about her past, Domino’s father shows support in his daughter’s racing career and her relationship with Lola.

Like with her father, Domino has a complicated relationship with Lola. They were a couple but something went awry in their past. Lola was also the mechanic in their racing crew but left when things ended with Domino. At present, Domino still loves Lola and seeks her out to rejoin their team. While Lola is skeptical at first, she rejoins the team with the condition that they keep things professional. However, readers can tell the two have romantic tension. Unfortunately, the will-they-or-n’t-they atmosphere surrounding their relationship often gets juxtaposed with the clear trust issues the two have with each other.

The creators of Motor Crush Vol. 1 know exactly how much to reveal to keep their audience’s attention. Throughout the volume, Domino shows confusion regarding her identity. It is clear to the reader that her father knows the truth or at least a part of it. Therefore, his adamancy in keeping silent only creates more curiosity in the reader and Domino herself.

Then, with the introduction of the mysterious rider, Motor Crush Vol. 1 makes clear just how unique Domino is. This figure knows that her body craves Crush and even reveals that he is a similar being. However, this person never gives away too much because he knows that by doing this it will cause Domino to seek him out. The ending of volume 1 also opens up multiple possibilities for where the story may go. Therefore, if readers enjoy a series that knows how to reel them in, Motor Crush Vol. 1 is a comic for them!

If you would like to purchase Motor Crush Vol. 1, visit Amazon and Barnes and Noble.

Motor Crush Vol. 1 by Brenden Fletcher, Cameron Stewart, Babs Tarr, Heather Danforth, and Aditya Bidikar
Motor Crush Vol. 1
Motor Crush Vol. 1 is an example of what can happen when the right group of talented individuals come together to create a work of art. With its beautiful illustrations, complex characters, and adrenaline-pumping action, Motor Crush Vol. 1 is a comic that will represent its generation.
PROS
SUSPENSE-BUILDING WRITING
AMAZING ARTWORK AND COLORING
COMPLEX FAMILIAL AND ROMANTIC RELATIONSHIPS
GREAT CLIFFHANGER
CONS
96
CRUSH IT!