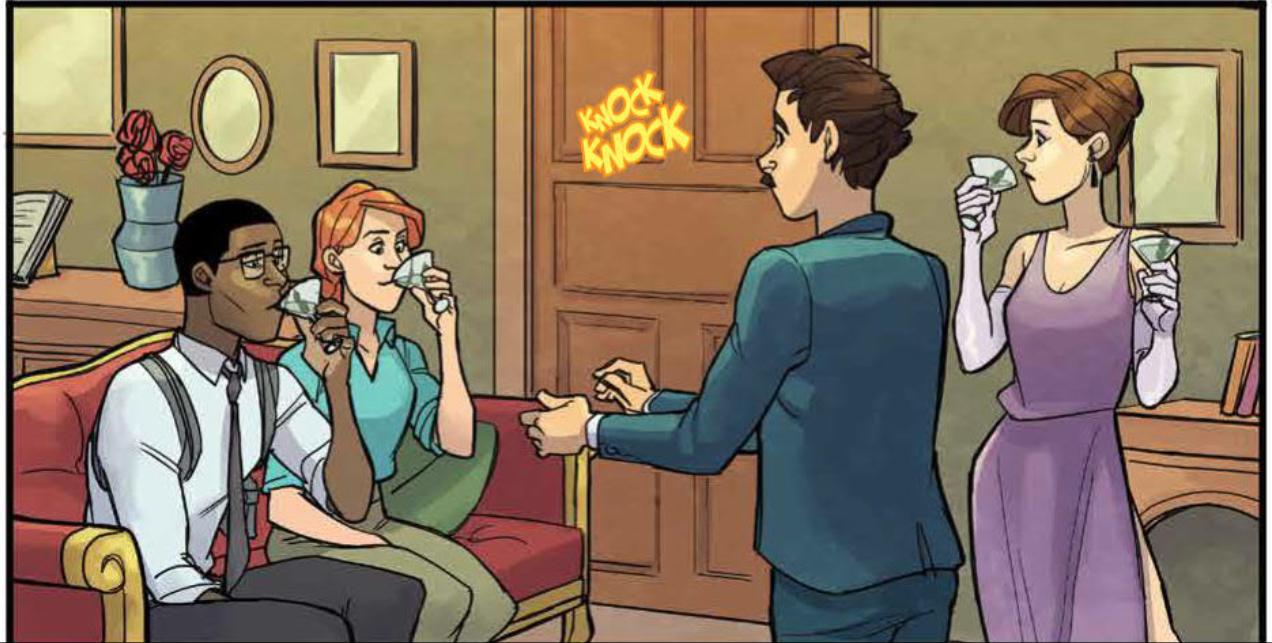 The Thrilling Adventure Hour: Residence Evil brings beloved supernatural hunters Frank and Sadie Doyle to comic form. Though affluent, the couple is relatable, funny, and bring a new flair to the genre of monster hunters.

Written by The Thrilling Adventure Hour creators Ben Acker and Ben Blacker, readers do not need to have listened to the podcast to enjoy the series. However, small quips and nods to the audio medium give fans a tapestry to behold. The comic was illustrated by M.J. Erikson and colored by Brittany Peer and Meg Casey with Fred C. Stresing and Katya Granger. The depictions of Frank and Sadie reflect The Thrilling Adventure Hour actors Paul F. Tompkins and Paget Brewster. However, the art style and dialogue brings readers back to the golden age of radio that the piece is set in.

Starting with a prologue in Zurich, Switzerland, Residence Evil draws readers in as workers load a mysterious box onto a plane to the U.S. The prologue’s lettering is Gothic in style and differs from the rest of the comic. Not only does this choice set the prologues apart from the initial story but also give viewers chilly suspense. The box has a strange effect on those who handle it but the prologue ends there.

The first issue opens with a reporter named Claude Dellman struggling to find a good lead for his story. With a noir film feel, Dellman seems slightly out of place but brings us into a roundabout yet narratively intriguing way to Doyle’s apartment. High above Park Avenue, we found the couple hosting their friends Donna and Dave Henderson.

As they drink their signature cocktails, Adam Silver, who claims his house is haunted, visits the Doyles. Known for their dealings with supernatural occurrences, the Doyles reluctantly visited his home urged by an eager Donna. The couple explores the house and find classic signs of ghostly activity. The haunting is skillfully illustrated using a tinge of blue throughout the scenes and crinkly outlined onomatopoeia. As lights flicker, cabinets slam and various kitchen items smash, Frank and Dave vanish and Donna and Sadie find themselves alone.

Though apart, the Doyles displayed their unwavering love for each other to reunite and summon the specter. The ghost reveals that she is not malicious but simply hopes for justice concerning her murder. The illustrators draw the ghost in a silvery hue outlined in white and minimally shaded. In her spectral form, she points to Silver as her murderer. Waiting outside the house for the perfect moment to manifest, Silver steps back into the story as a red-eyed vampire.

After revealing his true form, Silver explains that his need for blood caused him to murder his girlfriend. Through wit, will and Doyle’s stalwart love for each other, the thrall Silver puts the couple under breaks. Freed from the summoning circle by Sadie, his ghostly girlfriend enacts vengeance for her death. We also learn that Dellman is a spirit, who is unsure why he has been left a ghost. Dellman’s presence is still an off-putting in the story, almost like a forced subplot. He provides intrigue but his story offers more questions than answers throughout the arc.

The final installment opens up on the mysterious plane landing in New York with coven leader Vilhelm Shrei arriving at Doyle’s apartment. Fresh off another successful “unhaunting,” the pair is rather put out by this additional visitor. Shrei attempts to thrall the Doyles into inviting him in. But he ultimately fails as a result of more quick thinking by the Doyles. Though it ended in triumph, several unanswered plot points, like Dellman’s presence and a werewolf attack on Dave Henderson, kept anticipation for more installments high.

Residence Evil exhibits the clean and witty writing that Acker and Blacker bring to The Thrilling Adventure Hour. Though at times verbose, the comic does not solely rely on text to convey the overall story. Acker and Blacker slip Sadie’s list listing and Doyle’s love for booze tactfully into a copy. And while Donna Henderson is not canonically a vampire yet, the final installment leaves room to explore these characters further.

While the premise of a vampire returning to rule his coven is pretty run of the mill, the way Doyle’s address the supernatural is anything but. For a horror genre, the writing itself wavers from grandiose and haunting to irreverent banter. The way the Doyles approach their dilemmas veers from the gravity of classic monster hunters but gives the comics a twist of endearing originality.

Putting The Horror In Comics

Starting with the silhouetted cover art by Scott Newman to the tinted flashback and prologue scenes, the colors, and illustrations of Residence Evil truly bring the story to life. The muted and faded coloring adds to the feeling of dread and vague fantasy. Additionally, the colors and art style, though clean, feel vintage and bring readers back to the golden age of radio that the podcast emulates.

Though there is plenty of action, this is not a superhero, engagement focused piece. The visuals evoke the movement and ghostly ambiance of the story. The attention to detail, especially in the character’s apparel and architecture, further builds the world. Even the way the character’s eyes are shaded gives the piece a fuzzy haunting. The use of color adds to the comic’s authenticity and fully fleshes out the era and genre.

Beyond Belief Brings It

While the podcast brings Frank and Sadie to life with the dynamic acting and the spontaneous humor that comes with brilliant improvisers, Residence Evil uses the strengths of a visual medium to tell the story just as well. Though sometimes wordy, the comic brings all the tropes readers love about monster hunters without being cliche.

It masterfully blends Doyle’s relative distaste for the company with their penchant for saving others from horrors unknown. The issue ends with a satisfying conclusion while hinting at future plot lines. Paying homage to both the golden age of radio and The Thrilling Adventure Hour’s, the work gives comic lovers a rich world to dive into.

Residence Evil is more than a haunting tale as the Doyles bring their wit and banter to the monster hunting world.
PROS
CONS
95
Residence Evil