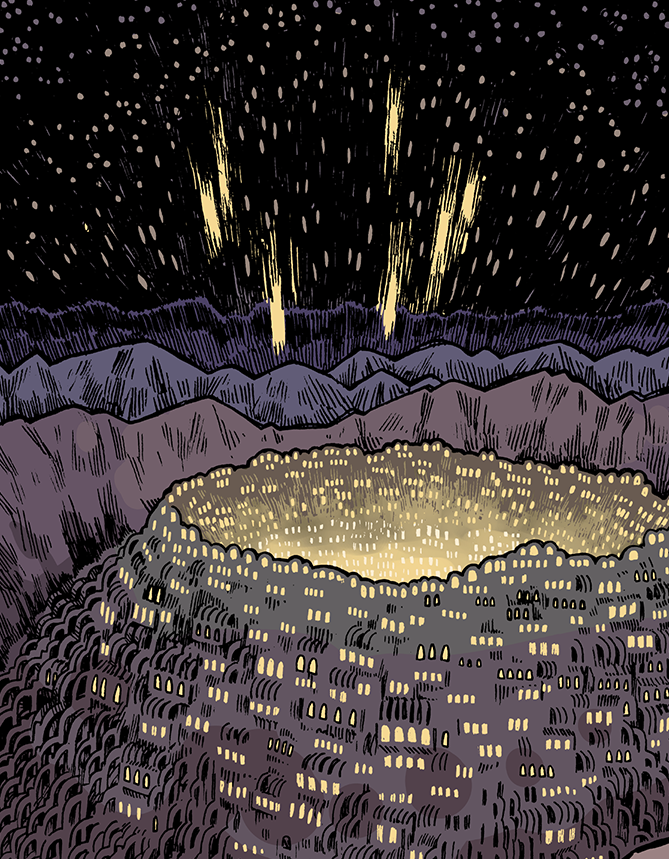 The Chancellor And The Citadel by Maria Cappelle Frantz offers a plethora of unique, stylistic choices for a middle-grade audience. This trade paperback’s protagonist is The Chancellor who protects The Citadel, a bastion of civilization in an already destroyed world. She protects her people from threats beyond the wall surrounding The Citadel.

Though monsters may appear in every corner, the true enemy may be in people’s hearts all along. What separates people is the fear of the unknown, the secrets kept between allies and the nebulous nature of true right and wrong.

Some Secrets Aren’t Told In The Chancellor And The Citadel

The first concept that strikes me with this graphic novel is you don’t get the world spelled out for you. It starts off with the character in the middle of a situation, rather than the set up of why there’s a need for a Citadel. As the story goes along, you have to make guesses based on context clues. The story doesn’t go into the past as much as it gives you the consequences of the present.

This guesswork allows the reader to fill in the dots. At times, I found it a disjointing process, but other moments gave room for poignancy. For a middle-grade audience, while this is an advanced technique, this guesswork helps them grow to become more advanced readers. On the other hand, this difficulty may not be the best for those on a lower reading level. I would ask the question of whether this work is accessible. I appreciated the character’s personality the most. You don’t expect the female character to be the protector, while the male character gets to be the damsel.

There are also figurative demons in characters you don’t expect, but the lesson becomes that you can choose to be a kinder individual. The process of being good is an active choice. I appreciated the uplifting tone of the book. There are dark parts, but the dark parts aren’t the end all and are all part of the narratives. There is character growth to show how change can be for the better.

Art In The Citadel And The Chancellor Can Cause Problems

The thin lettering causes problems for the eye because it’s hard to read. While I think the font does match all the other aspects of the comic, I’d admit it’s a little rough to consume. I liked the clear paneling with the slightly wavy lines because nice flourishes bring the scene together. When you look at the cool coloring tones, the reader feels both a sense of unreality and calm. This world is different from our own existence and follows different rules. On the other hand, your emotions don’t cloud, you realize this world’s problems mirror the real world’s cultural landscape.

There are also a few panels that look like they have little holes in them, which causes discomfort for those you are trypophobic. This artistic choice wasn’t a move that felt intentional. The small holes disrupted the dreamy tone of the Chancellor and the Citadel. The reader expects conflict to rise from a character’s choices, not the art style.

The character designs are unique and everyone looks different from each other. You have different body types, hairstyles, and skin colors that bring nuance to the world. There isn’t any weird sexualization, which I’d give points to the author for accomplishing. I like how the Chancellor is completely covered from head to toe, but the reader interprets the emotion that comes from her body language well enough.

Should You Read The Chancellor And The Citadel?

If you don’t have trypophobia or have a hard time reading thinner fonts, you should make an attempt with The Chancellor And The Citadel. The writer covers a good amount of unexpected characterization and nuanced lessons. The story is a little different from the usual fare of fantasy. While these lessons may be obvious at points, she brings the texts and images together well enough to make a reader think. In the end, I feel like for an advanced middle-grader reader they’ll have a strong book to chew on, while a less advanced reader may get lost in the pages. It takes time to bring all the threads together.