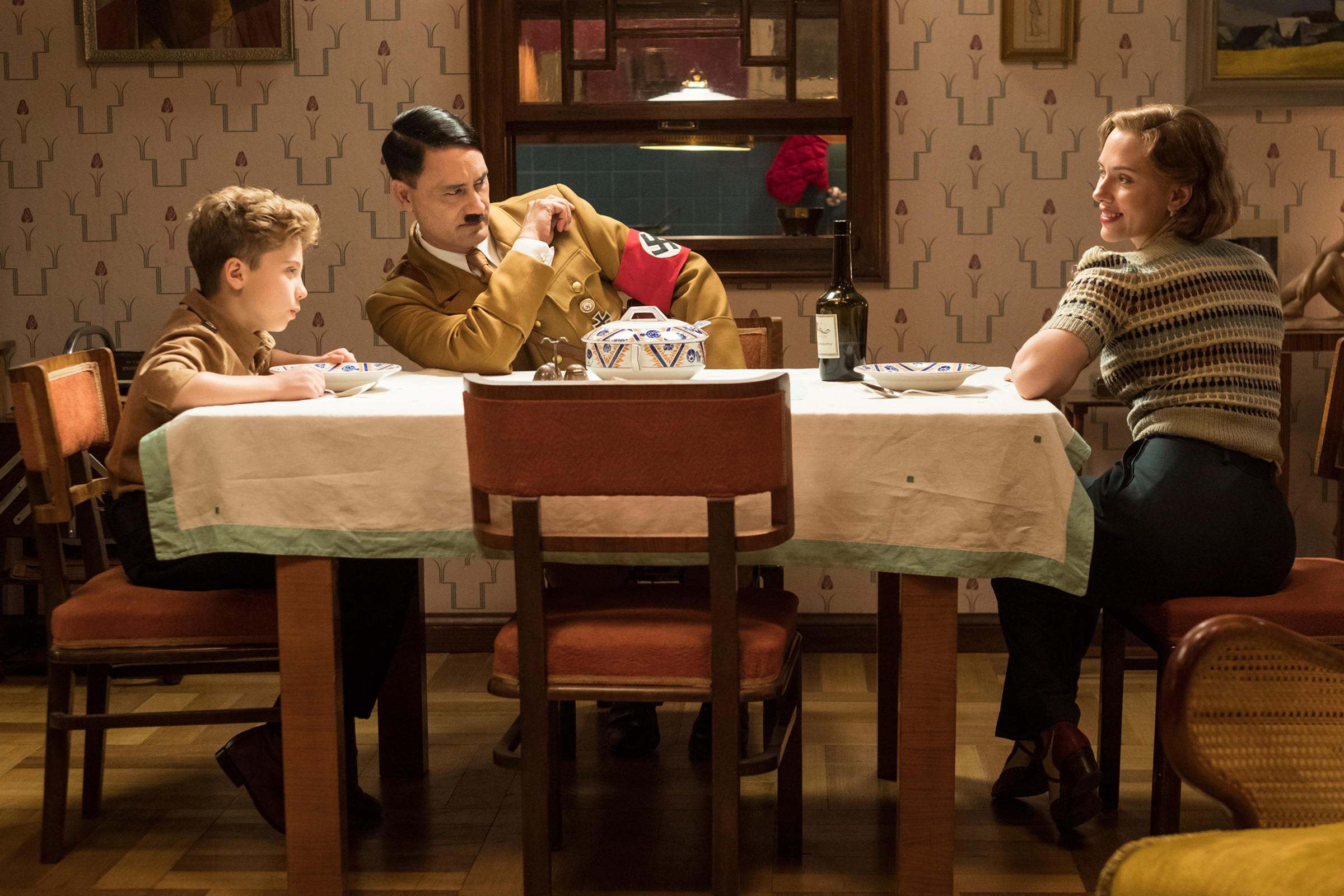 In a society where PC culture supposedly reigns supreme, how did Taika Waititi manage to make a film about a young Nazi that’s as sweet as strudel? Jojo Rabbit is a satirical treasure that can tug on your heartstrings mere moments after cracking jokes about totalitarian dictatorship. The ability to portray so many extremes at once seems to be a special kind of Waititi magic.

He somehow manages to always balance the charming and ridiculous with hefty doses of emotion and comedy all around. Prior to Jojo, Waititi’s most recent balancing act was Thor Ragnarok. Before joining the MCU, Waititi wrote and directed a number of features, most notably the cult classic What We Do In The Shadows. Jumping between a vampire mockumentary, a Norse superhero flick, and a World War II satire is a lot to handle. But if anyone could do it, it’s him.

With Jojo Rabbit, Waititi satirizes a propaganda-fueled childhood, proving that you can still go out on a limb with comedy.

What Is Jojo Rabbit All About?

Jojo Rabbit opens with the familiar chords of The Beatles’ “I Wanna Hold Your Hand” or (more accurately) “Komm Gib Mir Deine Hand.” As soon as Lennon’s dulcet German tones echo through the theater, a ripple of discordant recognition follows — a feeling that continues throughout the entire 108 minutes run time. We’ve seen movies about children in WWII before (The Boy In The Striped Pajamas, The Book Thief, etc.), but none quite like this.

In the waning days of WWII, ten-year-old Jojo, Roman Griffin Davis, is a newly minted member of the Jungvolk anxiously awaiting his first training session — think sleep-away camp for tiny Nazis. His trusty imaginary friend Adolph Hitler (Taika Waititi) is there to pump him up, but despite Adolph’s support, Jojo’s experiences quickly sour, earning him the nickname Jojo Rabbit, permanent leg damage, and facial scarring. Just like that, Jojo’s days in the Jungvolk are relegated to sign-posting and recycle-collection. Left to his own devices at home while his mother (Scarlett Johansson) is frequently out on some unknown business, Jojo stumbles upon a young Jewish woman (Thomasin McKenzie) hiding in a secret compartment upstairs. Hilarity, hope, and heartbreak ensue.

Is A Nazi Comedy Too “Edgy” For Viewers?

Considering how relevant this film’s take on prejudice might feel today, the timing is actually just a happy accident. Waititi wrote the script back in 2012 but at some point just got “busy.” So here we are in 2019 discussing a movie about a child Nazi with Adolph Hitler for a best friend. The story originated in a novel by Christine Leunens, Caging Skies. However, Waititi has put his signature spin on the source material, injecting it with comedy, naivety, and an imaginary friend that the original lacked.

That spin has been quite worrying for some, especially Disney, the film’s newfound owner since the controversial Disney/Fox merger. There have been several more “edgy” properties (such as Deadpool) that are currently distressing the monolith’s otherwise wholesome catalog. Some executives are worried that these properties will “alienate” their dedicated fan-base. And, honestly, I don’t totally blame them for that fear. The idea of using Hitler as comic relief has “problematic” written all over it, but somehow the final product manages to toe the line of decency by keeping true to the innocence of its titular protagonist.

The True Strength Of Jojo Rabbit Is In Its Characters

Doing any version of this narrative is a tightrope walk in and of itself. Keep it serious and it’s sadness porn. Make it romantic and it’s too schmaltzy. Add too much comedy and it’s derisory. Combine them all and you’ve got a huge mess on your hands. Or that would be the case if not for Waititi’s keen sense of genre-bending in his writing. The backbone of this script is its deep dedication to character. I’ll admit that the cacophony of genre and tone might not work for everyone. But the individuality and authenticity of the characters somehow pull it all together in perfect harmony.

Despite being seen through the eyes of a child, the adults in the film feel very organic to the narrative. This film is being sold as an “anti-hate satire,” but behind the marketing, it is a true coming-of-age movie. This is the story of a child raised amidst hate-fueled propaganda beginning to realize how preposterous that hate really is. Though the script vacillates from wildly comedic to downright tragic, the reality of Jojo’s journey and the people who are a part of it manage to keep the narrative grounded along the way, despite all the Hitler jokes.

On that note, is it okay to laugh at a maniacal dictator?

Well… it depends on the context.

We live in a politically charged era to a heightened degree, and that’s led to changes across the board — positive or negative, depending on who you ask. According to a lot of people, this burgeoning culture of political-correctness is particularly caustic to comedy. Most recently, Joker director Todd Phillips has said that “woke culture” led him to quit comedy altogether. According to Phillips “all the fucking funny guys are like, ‘Fuck this shit, because I don’t want to offend you.’” Waititi actually had his own (now viral) response to these quotes, “Lol he funny.“

How Waititi Does Woke Comedy Right

If you can’t make people laugh without being racist, sexist, or any other type of -ist, then maybe you weren’t that funny to begin with. Comedy can be challenging without being offensive, and Jojo Rabbit is a perfect example of that. How do you create comedy that is both funny and inoffensive? The short answer is: don’t be a bigot. The longer one is more complicated than I can fathom as an only averagely funny and somewhat inoffensive person. However, I can at least explain why it works in this movie.

For one thing, it’s very clear who the bad guys are here (spoiler alert it’s the Nazis). Even when Jojo idolizes Hitler, the movie depicts fanaticism as completely ridiculous. As if to say “Hey, can you believe how crazy these guys were for thinking this junk?”

And beyond just “Nazis are bad,” this movie is critiquing is the power of fanaticism — the idea that people, children, in particular, are susceptible to even the most nonsensical ideologies so long as their entire world is telling them to believe them. This movie casts Hitler as a young boy’s imaginary friend and doesn’t just use it for shock value; it has something to say beyond just playing with our expectations of common decency. If someone can create and contextualize a version of Adolph Hitler that I can laugh at guilt-free then anything is possible on the comedic horizon.

The Final Verdict On Jojo Rabbit

If you can handle weeping one moment and cackling in the next then do not miss out on this movie. Yes, there are a lot of ridiculous moments — a certain bit involving a Unicorn head comes to mind. But it never lets you forget the humanity behind the hilarity. When the story progressed to make way for more serious emotional beats I found that through laughter my heart had opened for Jojo in a way that I might have been guarded against in a more “serious” film.

The combination of tragedy and humor brings each aspect into sharper contrast. This distinct amalgamation leads to a far greater emotional catharsis than what I expected from a film marketed as a straight-up comedy. Waititi’s work on Jojo Rabbit proves that not only can people still craft comedy from challenging material, but that when skillfully wielded it can even intensify a narrative’s moral and emotional impact.