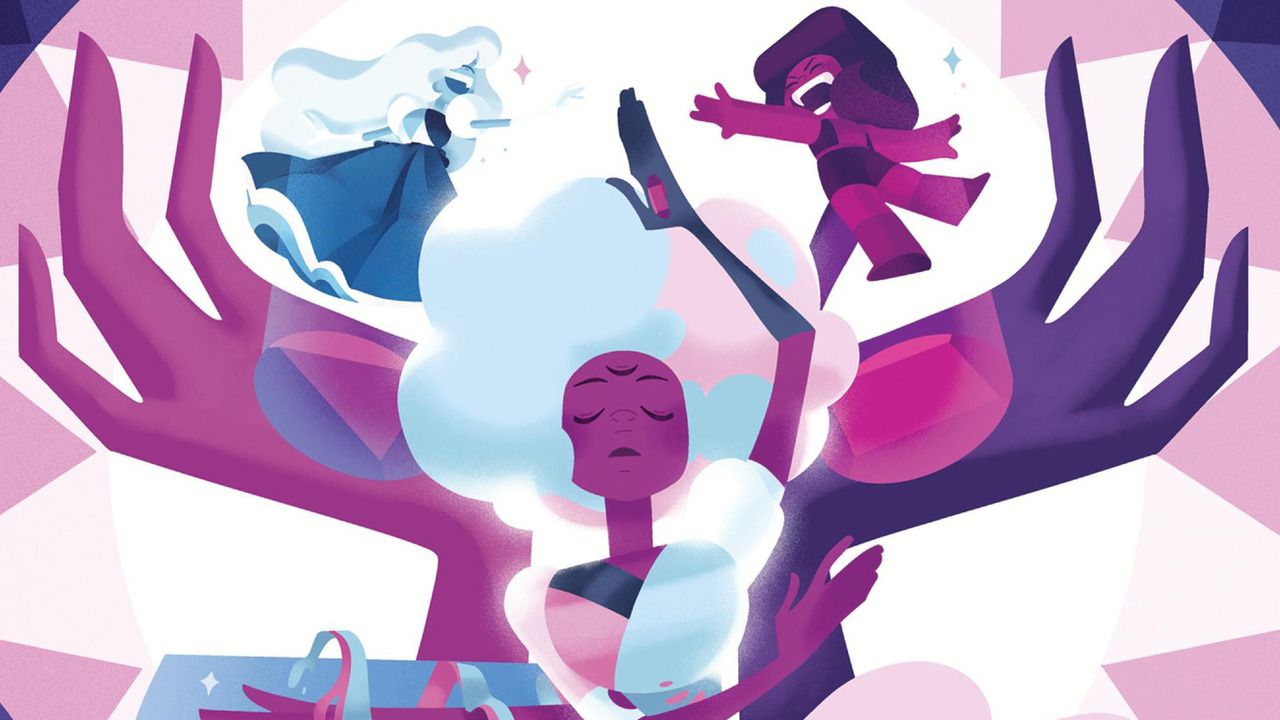 Steven Universe is back and not only on TV but also in comics! Steven Universe is a show on Cartoon Network about love, friendship, and family. The comic by KaBOOM! is no different. Steven Universe Fusion Frenzy #1 has five stories where you follow Steven and his friends as they discover who they are when they fuse together.

In Steven Universe, we still have yet to see all of these fusions together. This comic gives us just that; new and different stories following Steven and his friends as they become more comfortable with their fusions.

While there are five stories in this comic, I will only be talking about one! When the Light Breaks is written by Anthony Oliveira, illustrations by Ver, and Letters by Mike Fiorentino. This story starts out with the Gems training Stevonnie and it is being narrated by Garnet. Garnet is talking to Stevonnie about fusion and how dangerous it can be. After they are done training the group goes out (Pearl, Amethyst, Garnet, Steven, and Connie) to the Beach City Pride parade going on and, of course, Gem businesses are needed.

What will the Crystal Gems do when the parade is taken over by a corrupt gem?

The Story Of Steven & The Crystal Gems

The story written by Anthony Oliveira is about if you are a fusion you will be seen differently then if you are a standalone gem. It is about Garnet telling Stevonnie even though their fusion is made of love and strength, that there will be hardships even though they are doing nothing wrong being fused together. That being fused together it shows where Stevonnie stands with the Crystal Gems, that it is ok that they are different and not following the Homeworld Gems authority and rules. Garnet says,

”And where there is visibility, there is .”

This story is magnificent, you can tell the writer loves and understands Steven and the world he lives in. The way Garnet talks about fusion is beautiful and it seems like it came right out of the show. This story was written with emotion and warmth that I thought you could only find in the show, but I was wrong. I believe one of the best features of this story is that he put in a Beach City Pride parade. Like, how amazing is that?! Oliveira did wonderfully with this story and every Steven Universe fan will definitely enjoy it.

The illustrations are done by Ver. This art is like a daydream full of color and exceptional line work. I think this art is fantastic and goes fabulous with Steven and the Crystal Gems. Ver did well with this piece. I like all the nodes to the show like how Ronaldo is holding a “keep beach city weird” banner.

This art has a cartoon aspect with a watercolor based look. Some of their features seem like they are exaggerated and the colors are pastel with some neon accents. The background is not really detailed, but I think that is what gives it that cartoon aspect, it draws your eye to what the artists want you to see.

The End Result With Steven & The Crystal Gems

While I only went over one story in this collection, all of them are fantastic with great writers like Jy Yang, Steve Foxe, Nicole Andelfinger, and Sarah Gailey and illustrators Doki Rossi, Xiao Tong Kong, Mollie Rose, and Maurizia Rubino. All of these stories deserve a read from all of the writers and illustrators who worked very hard on these and put so much love into them. All of them did the show and the characters justice and deserve applause for what they accomplished in this comic.

Every fan of Steven Universe will love and adore all of these stories about characters we have not had many scenes with. These stories truly flush out these characters and you get to see them for who they actually are: big bundles made of love!

PROS
CONS
97
Be Yourself!