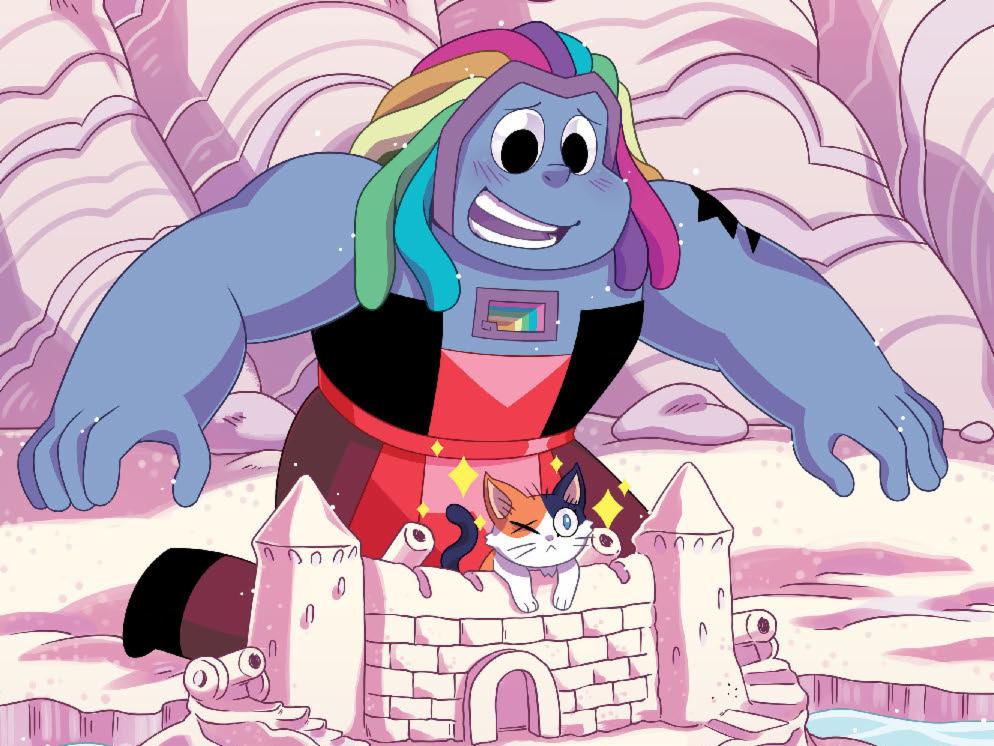 When it comes to Steven Universe, there are no complaints. The show, the movie, the new show, they’re all amazing. Steven Universe #35 was written by Taylor Robin and illustrated by S.M. Mara. It was colored by Whitney Cogar and lettered by Mike Fiorentino. Rebecca Sugar created the Steven Universe franchise.

Steven Universe #35 features a matchup that we haven’t gotten to see a lot of. Greg and Bismuth, none of the other gems, or even Steven, are in this issue. Normally that would be kind of a bummer, but the issue was a lot of fun that I almost didn’t notice that my favorite characters weren’t around.

When Greg is relaxing at the car wash (as he does), Fryman pulls up in his food truck. It’s all beaten up and damaged, definitely more than a car wash could fix. After Greg explains that he definitely can’t fix up the truck, Fryman questions how Greg has kept his van in such good shape. Turns out, Pearl has been fixing it up for him. Except, Pearl isn’t around.

Greg offers Fryman the next best thing, Bismuth. Except Bismuth is more weapons than wheels. It quickly becomes clear that she has plans to turn the food truck into a “tator tank.” After doing exactly that, she goes through the town looking for people with things that she can “fix”. Bismuth finds Jenny and tries to add a claw to the front of her pizza delivery car. Steven Universe #35 gives her the ultimate young person response of, “if it’s free I’ll take it.”

Fryman pretended to be excited about the tank (free lasers?) but in the long run, they had absolutely no idea how to drive the thing. He begins to cause problems on the boardwalk. Lasers go off and fire is everywhere. Bismuth has to take over in order to get it under control.

Bismuth Is Kind Of A Softy

After everything that Bismuth has gone through, I expected her to put up a little bit more of a fight. She immediately realizes what she’s doing is wrong and just stops doing it. There’s a bit of internal struggle, but not much. I would have liked to see her fight more about it. The earth is underprepared and needs people who can fight, and Bismuth knows that. It would have been nice to see some sort of compromise or plan for how the earth could survive another attack. Instead, she’s kind of just like “oh well” and moves on.

Bismuth quickly realizes that she’s doing the same thing that Homeworld was doing, trying to turn everyone into soldiers. She apologizes to Greg and promises she won’t do it again. Greg, who had been fighting for her to stop, is okay with this agreement.

Overall, it’s a fun story. The art is incredibly pretty like it always is. But this is a filler story. Nothing major or exciting happens, but it’s fun to watch characters we don’t see often get their own story. It was fun to read, but I wouldn’t read it again. It’s like in the main series of Steven Universe when there are episodes that don’t move the plot forward. They’re fun to watch, but when I rewatch the series I usually skip them.

Should You Buy Steven Universe #35?

If you’re reading the series already, I would say go ahead and buy the issue. It’s not essential reading, that we know of, but it’s not boring either. It’s fun to watch Bismuth add battle armor onto people’s cars and to watch Greg freak out about it, but it’s not anything you have to read to understand the story. That being said, it’s also a good issue to start on. If you’re new to the comic series, you could read this and understand what’s happening. Overall, read it if you love Steven Universe and its characters, you won’t be mad at it.