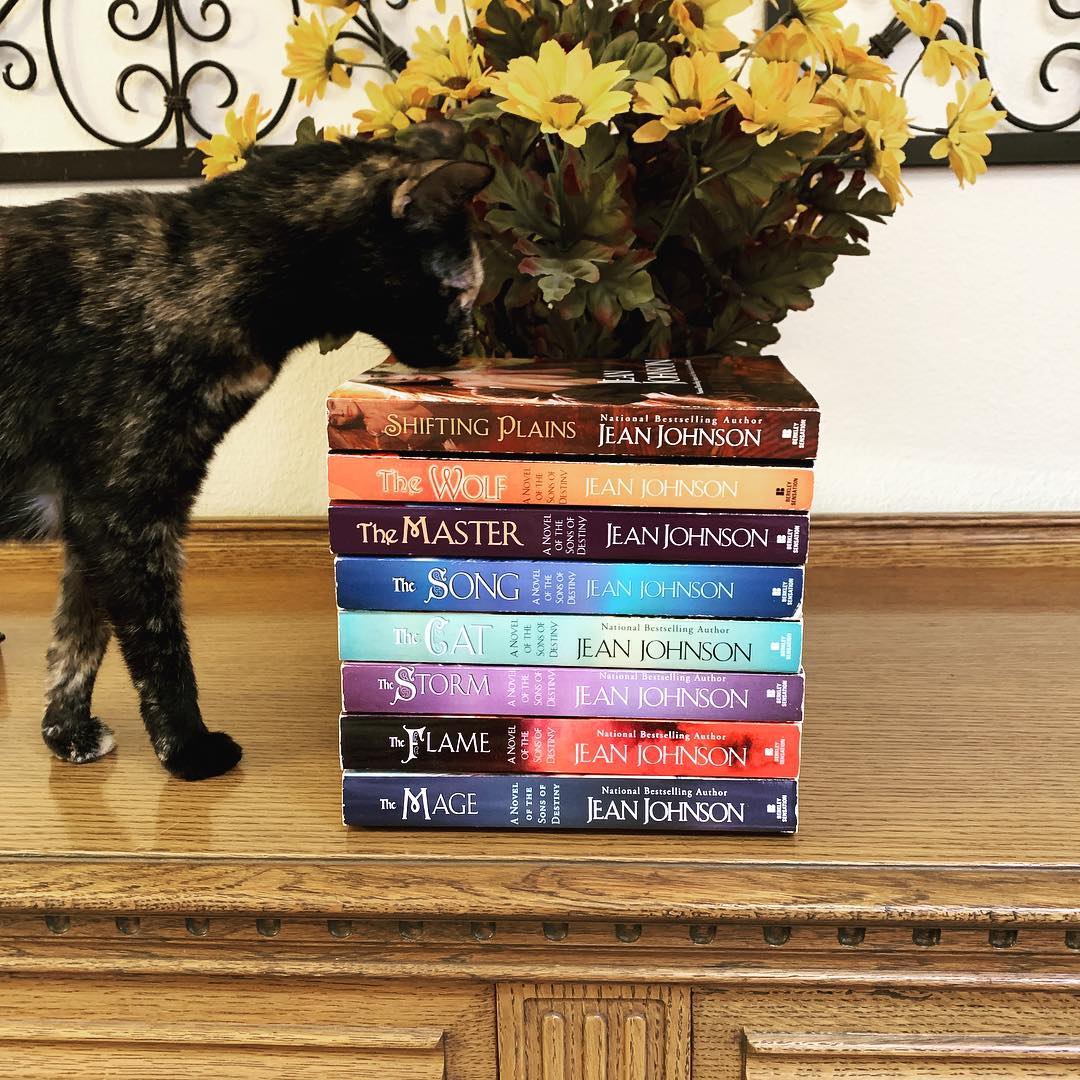 Sons of Destiny. In the magical Empire of Katan lived the eight Corvis brothers, four sets of twins born on the same day two years apart. Their lives changed when each bother displayed magical abilities that coincided with a prophesied Song of the Songs of Destiny, or Curse of Eight Prophecy.

Since the prophecy alluded to a disaster hitting the empire should the eldest brother fall in love, Katan exiled the eight brothers to Nightfall Isle with limited resources and no women allowed. After three years of exile, the brothers find a woman from Earth magically transported into their home. So the Song of the Sons of Destiny begins.

In this magical realm with prophecies, mages, and shapeshifters, author Jean Johnson creates an epic eight-book series that introduces readers to a brand new universe of magic with its own set of rules, culture, and conflicts. She weaves a tapestry of fantasy, romance, adventure, politics, mythology, and humor to create an immersive world for readers to explore.

Throughout the Sons of Destiny series, each book focuses on each brother’s story and their verse in the Song. The question at stake isn’t will the prophecy be fulfilled, but rather what are the consequences? If you knew your destiny, would you fight it or fight for it?

The Song of the Sons of Destiny Prophecy

The Song prophesied 1,000 years prior, predicts what will happen when each of the eight brothers falls in love. Some verses are harmless, but others predict a disaster, loss, or other unfortunate events. The entire prophecy can be found on Johnson’s website.

The Song is also unpredictable as verses are open to interpretation. Katan believed it would “fail to aid” its people when the disaster eventually hit, putting its people at risk. It’s not until the first woman to arrive at the isle points out another meaning with far less loss. This mix of different perspectives with different cultures is a common theme throughout the series. As more outsiders join Nightfall, the prophecy doesn’t seem as straightforward as it once did.

The eight brothers, along with their ladies, are the stars of the series and create a diverse and engaging ensemble. The eldest twins are Saber (The Sword) and Wolfer (The Wolf). Saber was the heir to their family’s title and estate before they were banished. He is the leader of the group with the ability to enchant magical weapons.

Wolfer specializes in shapeshifting, although he does have a fear of heights and avoids bird shapes. The next set of twins are Dominor (The Master) and Evanor (The Song). The third most powerful mage of the family, Dominor has a bit of an ego and is constantly in competition with his brothers. His twin Evanor taps into his power through singing and is more low-key and gentle.

The third set of brothers, Trevan (The Cat) and Rydan (The Storm), are complete opposites. Trevan, also a shapeshifter, is cheerful and sociable while Rydan prefers to keep to himself. The second most powerful mage, Rydan is very much the Storm and watches over Nightfall Isle at night while sleeping during the day.

The last set of twins are Koranen (The Flame) and Morganen (The Mage). Koranen’s magic is in fire, which poses a problem when high emotions cause him to literally heat up. Morganen is the most powerful mage and is the matchmaker. He ensures the Song of the Sons of Destiny prophecy gets fulfilled, even if it does get him into trouble.

As the eight brothers have distinctly different personalities to match their varied abilities, so too are the women represented in the Sons of Destiny series. The first to arrive is Kelly, an outworlder from Earth who, like the reader, is getting used to being in a world full of magic. She is fierce, stubborn, and often referred to as a virago by Saber.

Throughout the series, she transforms from outsider to self-appointed leader to elected leader of Nightfall. By using her outworlder knowledge of technology, government, and religion, she helps turn the exiled Isle of Nightfall into its own independent kingdom, with her as queen.

She is the first one to care for the brothers since their exile and is fiercely protective of them and all the Nightfallers. Likewise, the rest of the women, Alys, Serina, Mariel, sisters Amara and Rora, Danau, and even Kelly’s friend Hope, play active roles in not only helping to complete each verse in the Song of the Sons of Destiny but in helping the family with their mission to claim independence.

Not only are different personalities and body types featured in this series, but each woman has a specialty or expertise. For example, Mariel is a healer, Amara has leadership experience, and Serina is a math genius. Not everyone gets along, but that’s what makes for great conflict and great storytelling.

Although the Song of the Songs of Destiny focuses on the brothers finding love, the story revolves around the idea of home and destiny. With each book, the brothers feel less like Katani outcasts and more like rulers of Nightfall Isle. The family takes up their self-appointed royal duties to protect themselves and turn their exile into a home.

No longer fearful of their future, they tackle it head-on. As the isle is a property of Katan, a power struggle ensues and only grows are more nations get involved. The lore and political conflicts of the world are thoroughly fleshed out, creating an immersive experience for readers. It’s funny, suspenseful, romantic, and filled with surprises.

Overall, the series tackles the conflict of free will versus destiny and the consequences of the characters’ actions. The brothers’ interactions are both humorous and heartwarming, the ladies strong and fierce, and the world of magic jumps off the page.

When the Song of the Sons of Destiny is at last complete, you’ll want to transport there yourself.