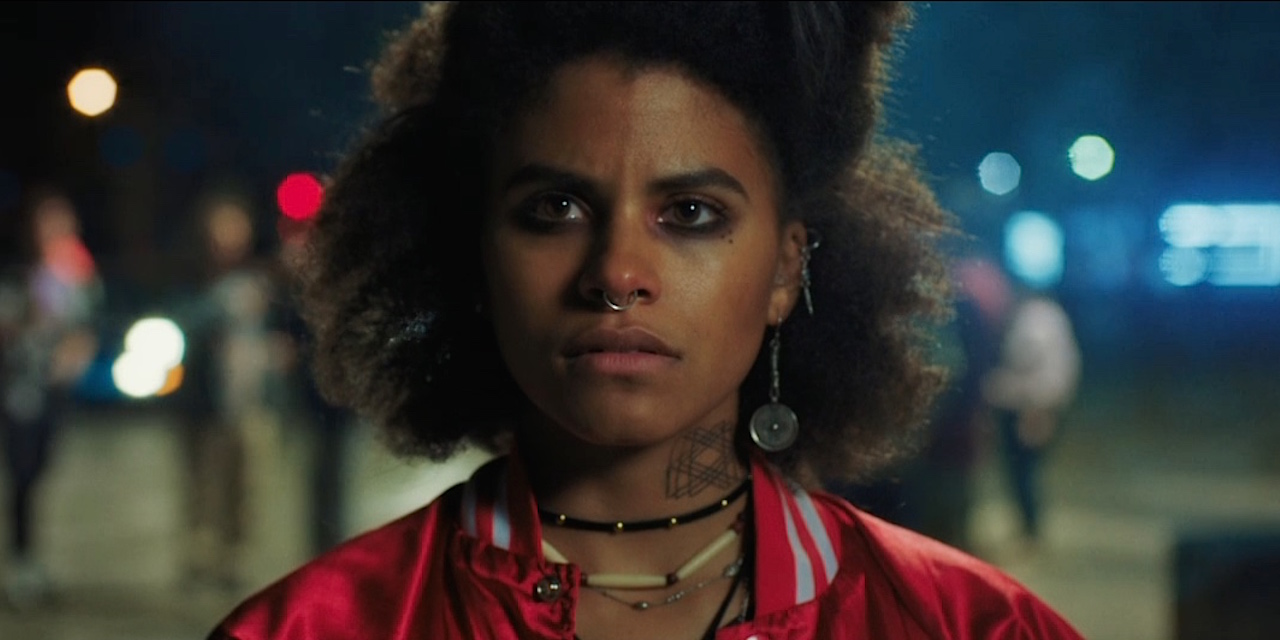 Remember back in September when Chance The Rapper (Chance Bennett) starred in a feature film called SLICE? We do. It took us a while to find the film, but it’s on Amazon Prime if you want to take a gander. The film was directed and written by Austin Vesely and produced by Kevin McGrail and Brandon Riley. The film, however, was distributed by A24. SLICE stars Zazie Beetz, Chris Parnell, Joe Keery, and Hannibal Buress, among many others.

SLICE‘s intention was meant to be a rather darker film, a modern retelling of a werewolf film (is how I saw it), similarly to the Teen Wolf films from 1995. In a spooky small town, a slew of pizza delivery boys being murdered on the job. The survivors, Beetz (Astrid; at Perfect Pizza Base) and Chance (Dax Lycander, a good werewolf), are set to catch the culprits behind the crime spree. In a small town where ghosts are seen as normal citizens, the obvious culprit for murder sprees should be ghosts, right? Wrong, it’s much bigger than werewolves and ghosts…

There’s nothing wrong with SLICE on the exterior of the film. Stylistically, it’s mesmerizing to watch; Vesely truly makes his debut film something to commemorate. The script, in turn, isn’t half-bad either, considering this was a modern retelling of the nostalgia 90s era. The characters, however, are sometimes over-done to the point where they are vexatious. As a film watcher, I assume this was on purpose, which makes me not loathe it. The concept of the film is interesting and intriguing enough to stand on its own, so the character aspect is a minor detail that wasn’t enjoyed.

Nonetheless, the only two big cons we had about the film were Astrid and Sean’s relationship that was not developed whatsoever. We were kind of descended into a formed relationship where we didn’t actually get to care about Sean. Plus, it’s Vesely playing Sean, so we see him trying to get a small role real quick in his own film (lol). The next aspect we could do without were Scooter and Heather’s outlandish personality. It was meant to be on purpose, of course, but they were like from the film Teen Beach Movie on Disney in 2013. They acted exactly like that, but thankfully one didn’t last long before he was murdered. That brings us to the next question: Who hates pizza this much? Not even Satan does!

SLICE Is Giving Us A Slice Of Elegant Cinematography & Writing

SLICE has various stereotypes and tropes throughout the film. I am assuming Vesely was purposefully making light of stereotypes in films as a dark comic venture. It worked, if so. There were a few moments I chucked because the story was so elaborate that it had to be seen as a joke. This is what made for an engaging film. Not taking it too seriously helped. The ‘cracking the case working hard journalist’ (Sadie Sheridan played by Rae Gray), the crazy cat ladies who are demons (Vera Marcus played by Marilyn Dodds Frank), the werewolf who doesn’t kill (Chance), and the ghosts of the small town of SLICE are what makes up the majority of the film.

With the current 56% (average 4.9/10) on Rotten Tomatoes, this film deserves much more appreciation for the script. SLICE starts a bit on the slower side, but by the climax and the end, the plot comes to fruition. The film is not perfect, but it does what it needs to do while being pleasing to look at. Various events transpired in the film that I didn’t think would.

Astrid ended up being murdered and turned into a ghost, her deadbeat literal dead boyfriend ended up being… well, dead and deadbeat even after his death. Dax’s character was one of the better characters throughout. Chance provided comedic relief, hilarious commentary, and his werewolf body looked exactly like Teen Wolf from 1995. If this film was designated to pay homage and provide a modern telling of these nostalgic tropes, it wins. By the end of the film, you are satisfied. Or at least I was.

Let’s Give A Second Shout-Out To The Cinematography

One thing that stands out immensely in this film is the cinematography. The directing style is stunning, from the dark tones to the mysterious aspects of the directing, it was just a pleasant film to watch. Zazie Beetz was perfection, but when isn’t she? Her outfits were fire — the only fault we had (mentioned above) was the boyfriend-relationship. We still didn’t care about Sean, no matter how many times they tried to make us. He was kind of a jerk anyway, so I was happy he was a dead deadbeat ghost.

If you don’t want to go into this film for anything else but Chance, Zazie Beetz, and the cinematography; I wouldn’t blame you. I went in knowing a vague idea of what the film was about (because of social media months ago) and actually enjoyed the outcome. For a directional debut, Austin Vesely truly shines in this film; as a director, writer, and somewhat actor.

His concepts and ideas are conspicuous in the script. Why this has a 56% on Rotten Tomatoes is beyond me. This film was easily a score if you saw what Vesely was doing. Paying homage to nostalgia, using those as comedic relief (which was rather hilarious), and then providing an entertaining, mysterious movie to watch alongside it. What more could you want?

WHAT IS A WEREWOLF?
In this hidden gem of an indie film under A24, we get massive nostalgia. Between the fray of films that deserve praise in 2018, this is one of them. With an unfortunate 56% on Rotten Tomatoes, this film is nowhere near (it's better, at least 85%). It's entertaining, pleasing to look at, and a great directional debut from Austin.
THE GOOD
CHANCE
ZAZIE
DIRECTING
SCRIPT
NOSTALGIA
CONCEPT
THE OKAY
THE OVERREACHING CHARACTERS
SEAN, JUST... SEAN
4.5
'ZA?
SLICE (2018)