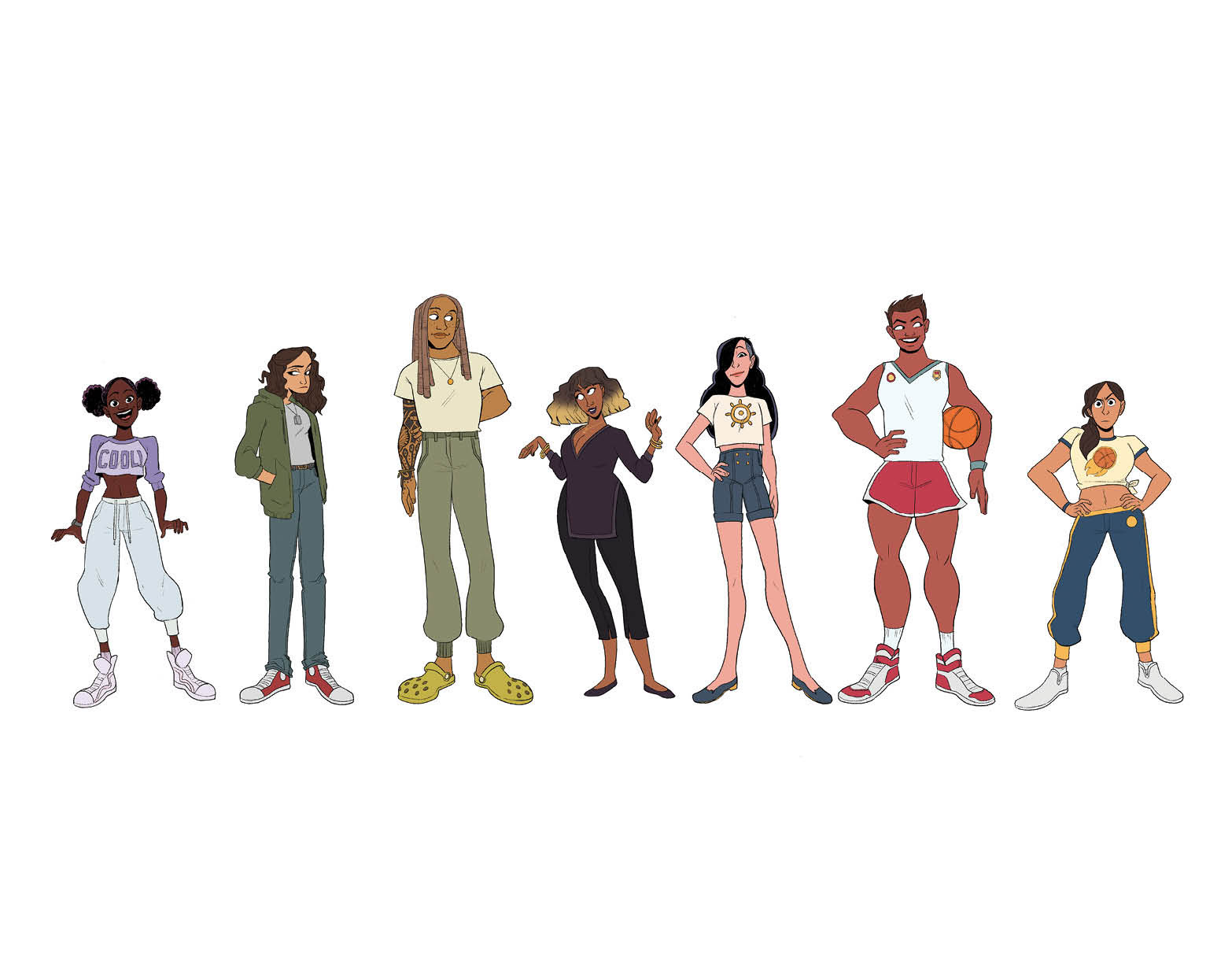 She Shoots, She Scores In The Avant-Guards #1!

Have you ever wondered what it’s like to be an athlete at an school? Well now is your chance to find out! From writer Carly Usdin, artist Noah Hayes, and colorist Rebecca Nalty comes The Avant-Guards #1 under BOOM! Studios.

When Charlie Bravo transfers to an arts college, she finds the very thing she’s running from: basketball. Headed by the talkative Liv Bates, the new basketball team only needs one more member to become eligible. Unfortunately, they aren’t having much luck finding their last member at a school that specializes in arts. Despite Liv’s attempts to recruit her, Charlie hesitates to join after some rough experiences with her old team. Still, Charlie relents after getting to know Liv a little better.

The Avant-Guards #1 starts off a little slow but still presents a solid beginning to the story. Charlie serves as our entry point into the world of Georgia O’Keeffe College of Arts and Subtle Dramatics. Since little happens to her in this first issue, the story instead focuses on her backstory and feelings of isolation. While we don’t yet know the specifics of why she quit basketball, she clearly still loves the sport. This suggests that her quitting probably has more to do with the people she played with than the sport itself. Going forward, I expect we’ll see her learn to be a team player again as she gets to know the rest of the team.

In contrast, Liv’s opposing personality compliments Charlie’s character. Unlike our protagonist, she’s energetic, talkative, and she loves teamwork. Her backstory isn’t as clearly laid out, but it seems like she’s played sports before. Perhaps she gave up playing after she started attending arts school. I’m excited to find out more about her and to see more of her dynamic with Charlie.

In a comic with no narration and limited dialogue, Usdin’s ability to show and not tell really shines. As a character, Charlie exemplifies this through many of her interactions. She isn’t very talkative but Usdin chooses not to give her an inner monologue. Instead, she allows the reader to simply observe Charlie’s actions. In this way, we get to know her quiet lifestyle. We watch her reminisce about her old team before slamming that chapter of her life as closed.

Then we watched her go through the motions of school without making any meaningful connections. Finally, we watched her quietly join Liv’s table, implying that she will join the new basketball team. As a result, we get to learn a lot about Charlie without getting into too much detail on her backstory. This makes The Avant-Guards #1 feel intimate and exciting even when there isn’t a lot of action.

Given Charlie’s quiet demeanor, the visuals are an important part of The Avant-Guards #1. Hayes and Nalty utilize repetitive images to show the monotony of Charlie’s daily life at school. A great example of this is the sequence where Charlie explores the student activities fair. As she goes from booth to booth, each panel is set up in the same way featuring two different booths. In each subsequent panel, Charlie moves from left to right, propelling time further along.

They also make great use of backgrounds to depict a character’s emotions. Consequently, each page is full of color and is always visually pleasing. Once the action picks up with the basketball scene, the panels become more irregular and fun to look at. Overall, the style of the artwork is deceptively simple, giving it a friendly, approachable feel.

While I expected a little more action in a comic about sports, I still really enjoyed The Avant-Guards #1. I loved the intimate look we got at Charlie’s quiet life. Usdin’s masterful storytelling pairs perfectly with the friendliness of the artwork. As with any first issue, I was left with many questions about Charlie, Liv, and the world they inhabit. I can’t wait to see what else is in store for the Avant-Guards!

The Avant-Guards #1 by Carly Usdin, Noah Hayes, and Rebecca Nalty
The Avant-Guards #1 is both personal and relatable, making it a great read for anyone. The artwork is warm and inviting, the perfect compliment to a story about a girl who's just trying to find her place. I'm so excited to see where where Charlie's story goes!
PROS
CONS
98
Slam Dunk!