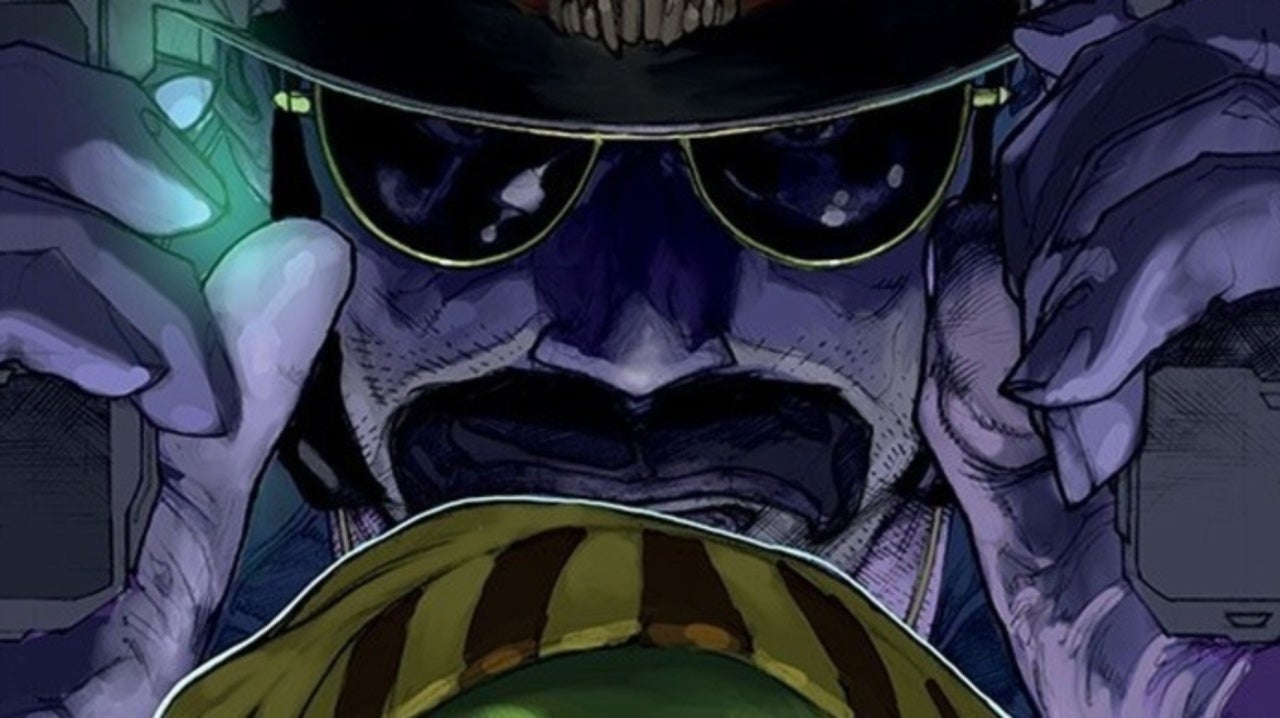 The first panel of Sharkey the Bounty Hunter #1 oozes atmosphere but lacks personality. This sentiment rings true for the entire first issue. Comic veterans Mark Millar and Simone Bianchi bring the story of Sharkey to life; a bounty hunter protecting a precious little nugget of a child through thick and thin. The subject matter is familiar ground to Millar, writer of Old Man Logan. The twist this time is that the setting is futuristic, alien, cyberpunk. But what do Millar and Bianchi do to rise above genre trappings and make Sharkey stand out?

When I say that Sharkey the Bounty Hunter #1 is a Space-Western, here’s what I mean: Sharkey takes Western genre tropes and sets them in a science-fiction setting. In concept, this is a rich setting for storytelling. The best sci-fi stories show a society where the lines between humanity and technology blur. Cyberpunk relies on contrasts between wealth and poverty to make a point about society, and to show off some cool visuals set in stone by Blade Runner. Nobody seems willing to stray from the Blade Runner template.

This genre is such a solid match with the Western that I’m honestly amazed it hasn’t been done before. While Western media covers a broad range of subject matters, it consistently returns to the idea of old vs. new. The cowboy represents the old America, while the soft-handed oil baron represents the new. And that’s the most interesting aspect of mashing the two genres up! Cyberpunk will side with the young, the rebellious, the people trying to make a change. Westerns tend to lean towards the older, more conservative side. How do you take these two opposing ideals and make them work?

We open with a narrator introducing us to our setting: a “total shithole the good guys are trying to redevelop.” Our main character Sharkey sits in a grimy bar. From here, our hero taunts a fellow bar patron, attacks him, and reveals himself as a bounty hunter. After addressing his credit troubles, Sharkey goes home with a woman who is in the process of turning herself into a car. More on that later. The two are suddenly interrupted by a little boy who guilt trips Sharkey into chauffeuring him after arresting his uncle. Though Sharkey originally plans to leave the kid behind, his consciousness gets the better of him. He turns around, picks him up, and starts the series proper.

The story unfolds through a bit too much-spoken exposition. This is the pitfall of a first issue — especially with a complex cyberpunk setting. The panel layout and storytelling feel more cinematic than comic-y, which makes sense as Sharkey is being simultaneously developed for Netflix. Much of the world-building, character introducing, and plot pointing relies on spot-on dialogue and predictable story beats. Sharkey proclaims his hatred of children without a hint of irony.

His Assigned Personal Baggage, Billy, outright states that as a retired member of the Sun-Corps, Sharkey’s integrity is what matters most to him. What’s truly painful about moments like these is when a character immediately does something to prove the statement true. Billy didn’t have to tell us that Sharkey is a good guy deep down! We can all see that for ourselves when he goes back to him four pages later.

The bounty hunter may as well be an archetype at this point, and Sharkey himself is a perfect example. He’s witty, emotionally distant, and effortlessly cool. He sleeps around with a woman who is presented as a literal object. (Of note, this relic of character writing is disguised as empowering by her statement that she is

“Becoming what (she) really (wants) to be… an expensive piece of four-wheeled hardware.”

Mark, you made a lady. I don’t know what you could have written around this to make it acceptable. But know my stance on this sort of thing.) Sharkey the Bounty Hunter is the type of guy you’d meet at a bar who would only queue up Bon Jovi in the jukebox. He is not my personal favorite type of character, but there’s a lot of promise in the found-family angle that I think the story is going for.

A rough first issue is by no means a death bell. Sharkey the Bounty Hunter #1 has a lot going for it! As a planet-hopping adventure, there’s a lot of opportunity for Bianchi to play around and show off with colors and alien designs. Funnily enough, as soon as Sharkey and co. fade into the background to introduce a new character, the story gets a thousand times more interesting.

We cut to a unique location, a honeymoon planet. A newlywed bride then proceeds to take out her husband’s entire criminal enterprise before revealing herself as a burly bounty hunter. While I would prefer the character to actually be the VERY cool design he’s introduced with, I like this setup. The bounty hunter is shown to be merciless and underhanded. He would hide and deceive people before making a kill, a relatively cowardly approach compared to Sharkey’s tendency to just show up and beat up his targets.

Should You Be Reading Sharkey The Bounty Hunter #1?

While I personally won’t be coming back to the series unless it’s pushed on me, I think it could find an audience. If you like antiheroes and are fond of family stories, Sharkey the Bounty Hunter #1 is probably for you! While the first issue lacks enthusiasm, the story it sets up is making a lot of promises.

As for me, I can’t personally recommend it to anyone who wouldn’t go out of their way to find it in the first place. I find the writing uninspired, the setting cliché, and the characters boring. Cyberpunk is such a rich setting for adventure stories, but it feels wasted here. If I wanted an action-adventure space opera from Image comics, my best option would always be Saga.

Though the writing is nothing special, Sharkey the Bounty Hunter has the potential to become a truly great story using its setting and characters.
PROS
CONS
62
Sharkey!!!