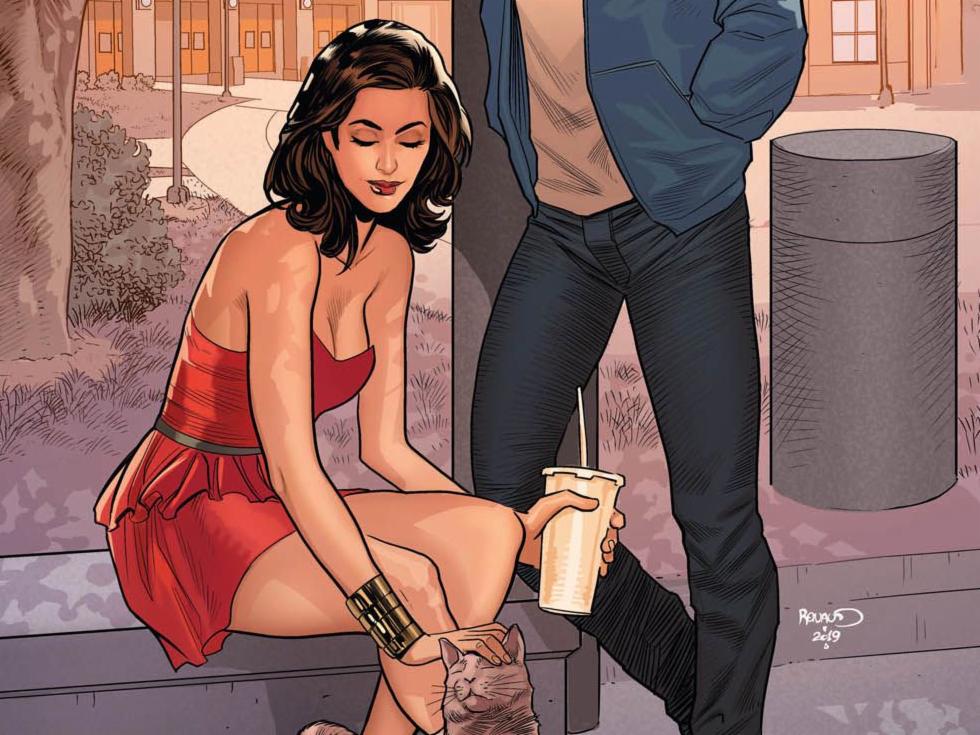 Riverdale Gets Some Fashion Sense In Archie And Katy Keene #1

It’s time to move on from Archie Andrews because a new star has entered Riverdale and her name is Katy Keene. That’s right, the Katy Keene, the fashion icon, is now in Riverdale and everyone wants to know why. After Archie and Katy Keene #1, though, Archie wants to know for how long is she going to stay. We last left Archie and the gang dealing with many problems. Betty and Veronica are fighting over land, Jughead and Reggie are in the middle of a mystery, and Sabrina and Archie have a huge argument. There is a lot that has happened lately in Riverdale.

Sadly, this issue doesn’t continue what happened in the last issue of Archie. This issue, however, steps away from the obstacles within Riverdale and focuses on the one and only Katy. The issue is filled with pleasure, excitement, and mystery. Get ready for the modern debut of the original fashion icon in Archie and Katy Keene #1.

In 1945 the world looked to different forms of media for entertainment to escape the problems of the time period. As televisions were just being created, many individuals turned to radio, movies, and surprisingly enough… comics. During this time, comics became one of the most popular forms of entertainment of the decade for children and adults.

During this Golden Age of comics, Archie comics created Katy Keene, which at the time was also known as “America’s Queen of Pin-ups and Fashions.” She started out life as a side character in Archie comics but soon gained popularity with her fashion and very adult pin-ups. In 1949, Katy Keene assuredly had her moment in the spotlight with her own comic series which lasted for 12 years. During this successful run, there was an interesting stunt.

In each issue, Katy would urge fans to send in their own fashion sketches and one fan’s design would be featured in her next issue. This ploy worked so well, however, that many fans sent in their work. There was so much artwork that almost everything Katy wore throughout the series was based on work done by fans. Sadly, in the 1960s, she disappeared and fans then pleaded with Archie Comics for a comeback ever since. Finally, in the 1980s, fans created Katy-Kons within San Diego Comic-Con to celebrate the character with hopes the comic would return.

Then in 1994, Katy began to appear in a few Archie Comics and magazines throughout the early 2000s. Now Katy Keene is back with not only a role in the new Archie Comics but will be starring in her own TV series. It’s a fabulous time to be a fan of this fashion Queen.

This issue begins at Pop’s with Jughead trying to find out who the new girl in town is. At the same time across town, Archie is playing a song for a distracted Sabrina looking at pictures of the new girl on her phone. As Riverdale High buzzes about this new mystery girl, Archie is bothered about performing his new song in front of people. Later that night, Sabrina reassures Archie that he is going to do great. After Archie plays his heart out on stage, he is sure that he will win the contest. That is until the new girl walks in and stuns the crowd with her outfit; she walks on stage announcing she is Katy Keene and rocks the stage with her performance.

After she wins the competition, Archie and the gang find Katy to introduce themselves and rave about her performance. Katy is very grateful and heads home. After a chat with her sister, she begins to create a new outfit for the Riverdale Roller Rink. After taking some pictures in her new outfit, Betty, Veronica, and Sabrina ask Katy if she can make them an outfit as well. Katy then surprises the girls with the same outfits in their sizes. As they all have fun, Riverdale witnesses everything online and wonders, more than ever, who is Katy Keene?

Are Archie & Sabrina A Couple?

Archie comics recently tried something unusual within its main Archie Comic Series. For the first time ever Archie begins to date everyone’s favorite teen witch Sabrina. As this was an intriguing relationship, Archie and Sabrina #5 (or Archie #709) seemed to end the relationship entirely. With Archie not too keen on Sabrina being a witch, she felt insulted and left him. It was a great ending to the story arc that left fans wanting to see the aftermath of that break-up. Then Archie and Katy Keene #1 (Archie #710) prints and now fans are scratching their heads. Within this issue, Riverdale residents try to figure out who Katy Keene is.

Fans, however, are wondering about Archie and Sabrina. Again, as the issue prior seemed like the end of their relationship, the second page of the issue shows the couple together in Archie’s room. Given the benefit of the doubt, they could now be friends. In the issue she’s seen hanging out with everyone in the gang like nothing is wrong. The couple could have talked behind the panels, which is fine, but it would have been nice to see. Then a few more pages into Archie and Katy Keene #1 and Sabrina kisses Archie. Many questions pop up after this panel appears in this issue ranging from their relationship status to witchcraft. Hopefully, this plot hole can be explained soon so fans can stop scratching their heads.

Solving A Mystery From The 1940s

In this issue, a huge Katy Keene enigma was ultimately answered. Since her creation in 1945, Katy has always had a little sister, but she was never named. In every Katy Keene comic, her sister was always referred to as Sis. At the time it wasn’t a big deal that she didn’t have a name, but as years went by many wanted to know her name. Finally, in Archie and Katy Keene #1 her name was revealed to be Sis Keene.

As an in-joke for die heart fans of Archie, there is even a panel where Sabrina has to clarify the name. It’s wonderful that she questions her name and no one else does. It would be fun if she brings up this question to Sis’s parents if she ever meets them. It’s a perfect moment that not only solves a mystery from the 1940s, but it’s done in an entertaining way.

Who Is Katy Keene?

The biggest question on everyone’s mind is who is Katy Keene? As her name is on the title of this series, readers barley get information on the character. At this point, there is very little knowledge about the character and fans are just as confused about it as Jughead is. Many are wondering why she moved, but a bigger question surfaces. How old is Katy Keene? Again, age shouldn’t matter, but she is hanging out around teens. In many iterations of Katy, she is a young adult in college.

As this is a series in itself, why is a college student hanging out with teenagers? There isn’t anything wrong with it, it’s just an odd choice. The issue shows that she is internet famous as well, so why wouldn’t she be trying to hang out with that crowd? There are so many questions that it could fill a page. Still, this is only the first issue, so maybe all of these questions will get answered in due time.

What Did We Think Of Archie And Katy Keene #1?

Archie and Katy Keene #1 was a pleasant first issue overall. There were moments of confusion throughout but it was a great set up for what was to come in the series. There are only five issues to this arc and hopefully, like the previous arc, it will end with a bang. Let’s just hope the events that occur in this series stick and don’t get ignored a bit like the previous arc. Other than that I did love that Katy Keene’s sister got her official name in this issue. It’s hilarious that it’s just Sis, it’s a homage to the origins of Katy Keene.

Hopefully, there will be more little Archie comic in-jokes contained in this arc. It would be wonderful to have Katy showing her design sketched and mention a fan sent her some. It will make this arc a model to be under the Archie Forever line of these comics. There are a lot of high hopes for this series and with this issue, it looks like they are starting off on the right foot. Riverdale has a new star and fans can’t wait to see what comes next.