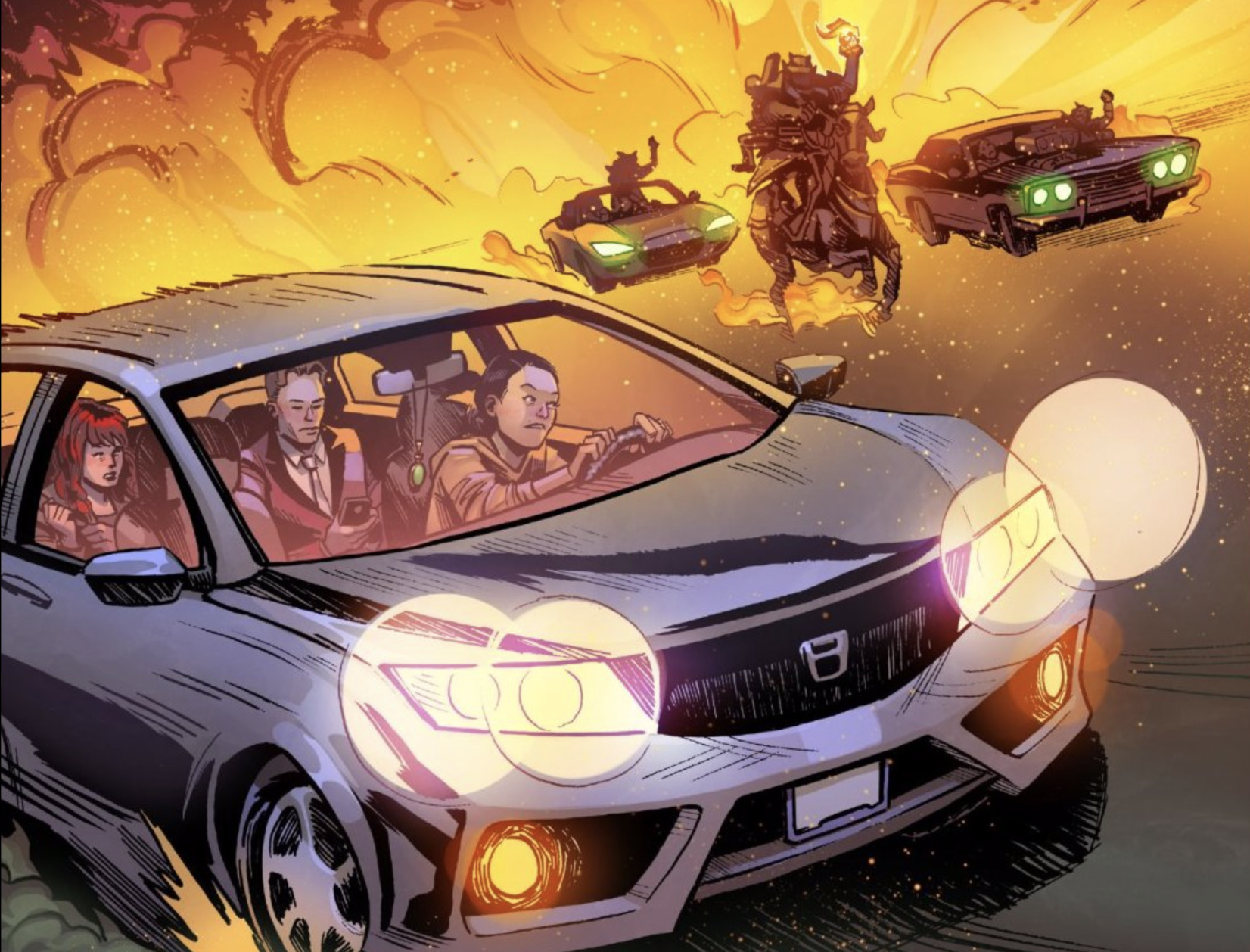 Ride-Share Into The Afterlife With AFTERLIFT

AFTERLIFT is a comiXology original comic following a ride-share driver who picks up a demonic client in need of a ride to the afterlife. AFTERLIFT blends the modern world with ancient ways of the afterlife and fully embraces both parts of the story. With detailed visuals and a story that dives deep into what individuals carry throughout life, AFTERLIFT packs a lot on each page. AFTERLIFT was written by Chip Zdarsky, with art by Jason Loo, colored by Paris Alleyne, lettered by Aditya Bidikar, and edited by Allison O’Toole.

AFTERLIFT follows the night shift of Janice Chen, a young ride-share driver.  Janice has a strained relationship with her parents and a distant home life that has left her with a lot of baggage. She enjoys driving, so does ride-sharing to make some extra money. A suave customer named Dumu is her customer one night, and his ride involves picking up a distraught young woman named Suzanna. Janice is suspicious about this being something shady, but Dumu explains that he is escorting Suzanna into hell, and using Janice’s car as transportation.

From there, Janice understandably freaks out, but the app on her phone directs her to purgatory. However, her car is attacked by rival demons going after Suzanna’s soul, which leads to a supernatural chase scene that brings Janice into purgatory. Riding to the mortal end, Suzanna says she deserves hell and accepts her fate. Janice, though, is not so convinced that Suzanna is beyond redemption.

She and Suzanna escape Dumu and the attacking demons and begin another speed chase through the afterlife.  While on the run, the two encounter angels, demons, heaven, and hell. Their intense journey involves facing difficult realities about their lives. AFTERLIFT explores the inner turmoil and guilt that these characters carried into the afterlife. This makes the comic introspective and conveys how much of Janice and Suzanna’s battle for spiritual redemption is an internal one.

AFTERLIFT’s writing gives readers glimpses into bigger stories for both the mortals and supernatural characters. Few things are overt, with many details only implied and even left mysterious. Suzanna’s guilt and why she feels deserving of hell, implications of the afterlife, and the relationships between demons and angels are all touched upon. However, the comic only shows scattered, key details.

This gives AFTERLIFT a mysteriousness, and also reflects Janice going into an unknown world with unknown people. Janice does not get the whole story, and neither does the reader. She and the reader have only a little time to get context before the next danger arrives. This gives the implication of AFTERLIFT just scratching the surface of its own story.

AFTERLIFT‘s Look At The Afterlife

AFTERLIFT mixes different cultural depictions of the afterlife. There are references to Judeo-Christian afterlife, but also mentions of Buddism and reincarnation.  Additionally, the designs of AFTERLIFT‘s demons take inspiration from Indonesian demons, which gives a more worldly blend of religion and spirituality. In the story, every religion is correct, but every religion is wrong at the same time. AFTERLIFT strives to create its own afterlife with its own rules which in turn lets the characters explore their places in the universe.

The demons’ interaction with each other and the modern world suggests how ancient they are. Some, like Dumu, enjoy modern marvels like guns and cars. Other demons prefer to be traditional with their weapons and transportation. The integration between the world of the afterlife and the living world provides a fascinating contrast for world-building. The further Janice treads into the afterlife, the less like home it seems. However, her car and phone are still key tools, which continue the aesthetic duality of the story.

AFTERLIFT’s artwork expresses the duality of the comic by having beautiful scenes in the mortal world and in the afterlife. The artwork reflects the shift between life and death in its color palette.  AFTERLIFT has a full spectrum of warm and cool colors, and really makes great use of coloring each page to be dynamic and full.  Different locations have different pallets, which stresses how far away from the living world Janice ventures.

Overwhelming reds come with demons and in hell, purgatory is cold with stark black and blues, and eventually, Janice finds herself driving to heaven and met with pastels. This not only sets the tone for each location but lets Janice, in her earth-toned outfit, stick out. Additionally, the color enhances the high paced action scenes by being vibrant with both hot and cold colors. This brings impressive ink work to life in every kind of scene.

A standout for the artwork would be the action scenes. Janice goes through literal hell with demonic battles and chases along the way. Supernatural car chases feel exciting and full of motion, which is quite a feat for the comic medium. AFTERLIFT’s inks convey speed, suspense, and danger to rival any live-action car chase. The artwork has an impressive sense of motion by using dramatic angles and speed lines. As the comic goes from intense action straight into slower, more emotionally charged moments, the visuals follow suit with appropriate pacing and artwork.

AFTERLIFT Is Worth The Ride

AFTERLIFT starts as a quirky concept, being a ride-share to hell. However, the comic expands on that concept to explore the things characters carried with them throughout life. The use of the ride-share concept allowed for a whole world to unfold, such as the need for transpiration into the afterlife. Additionally, it marked the comic as up to date and modern, which provided it with its characteristic duality.

AFTERLIFT is a satisfying read in both action and emotion. Janice’s mission to save Suzanna’s soul involved having to convince Suzanna to let go of her own guilt and self-hatred. This proved difficult, as Janice was then faced with her own. As much as the girls are trying to survive against demons and the possibility of hell, they are also struggling with forgiveness. The inner struggles of the characters prove to be as difficult, if not more, than the afterlife. AFTERLIFT is fairly short, only about 120 pages in total, but explores timeless questions of life, spirituality, and self-forgiveness through a modern lens.