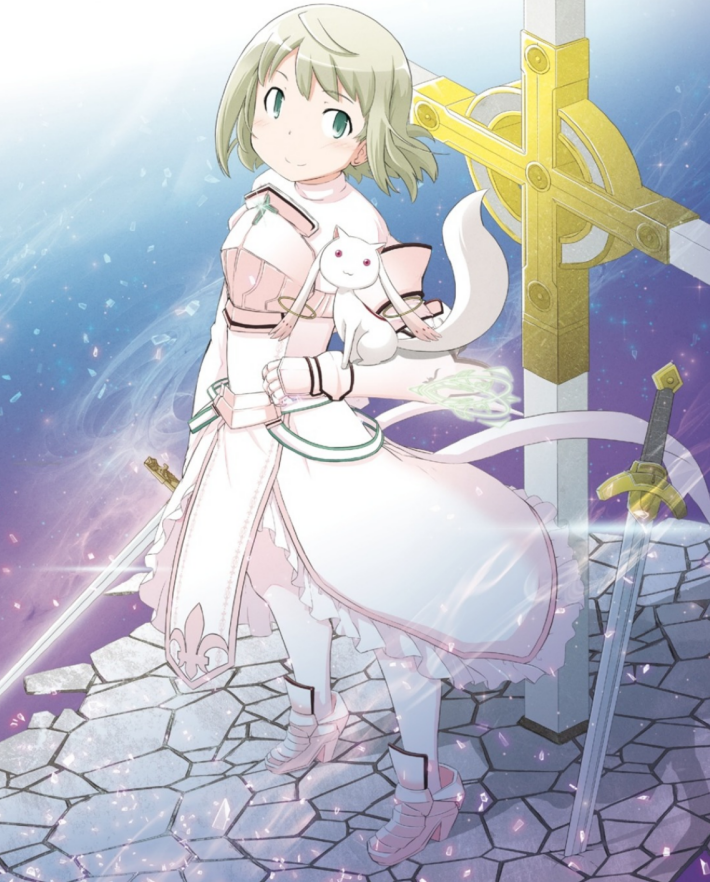 Puella Magi Tart Magica: The Legend Of Jeanne d’Arc, Vol. 1: A Story Of Hope Shining In A Time Of War

Joan of Arc is a well-known figure in Western history. During the Hundred Years’ War, she claimed to hear the voices of angels and saints and fought on the side of the French. She was eventually accused of witchcraft and burned at the stake. However, she has since gone on to become a martyr to the Catholic Church, with her story referenced and retold again and again.

(Note: Both this review and the manga assume the reader is familiar with Madoka Magica, as many of the plot twists from that show are treated as common knowledge.)

A Familiar Tale With A Twist

Tart Magica begins properly in the village of Domremy, France, in the year 1425. Jeanette is a young village girl with a strong belief in God, a comforting belief as the shadow of war looms over France. One day, after praying in church with her sister Catherine, a small fairy draws them into the woods. Undead soldiers approach them, but a mysterious, dark-haired girl named Riz comes to the rescue. A small, white-furred creature named Cube accompanies Riz, Jeanette taking the former for an angel (after seeing the rings on Cube’s ears and likening them to halos).

Welcome To The World of Magic

It turns out Riz and Cube have come seeking out Jeanette; Cube sees potential in the young peasant girl and offers to grant her one wish, in return for her becoming a Magical Girl and battling monsters known as Witches. With the threat of war inching closer and closer, Jeanette — though initially reluctant — accepts Cube’s offer. Adopting the nickname “Tart,” she resolves to travel with Riz and Cube to meet Charles the Dauphin, believing his becoming king will end the war. It won’t be easy, however, as England appears to have its own army of Magical Girls…

Making The Best Out Of A Bad Situation

Those familiar with Madoka Magica will already know that there is something sinister underlying Jeanette/Tart’s journey. Cube (also known as Kyubey, AKA Incubator) is just as responsible for Magical Girls as it is for the Witches they fight. The Witches are, of course, Magical Girls after they become filled with despair. And indeed, Tart Magica assumes the reader knows this, too, as an in media res opening chapter quickly reveals this.

Cube, meanwhile, is consistently portrayed as a manipulative figure luring Tart into its trap. Those familiar with world history will already know that the historical Jeanne d’Arc met her end at the stake, accused of witchcraft. The challenge for Tart Magica, then, is for the narrative to engage the reader, while still building towards the obvious endpoints.

The strength of the first volume is in its characterization; Tart is the usual Magical Girl heroine new to her mission. While naïve, her heart is in the right place, and like Madoka, she wants to right the wrongs she sees. Riz, meanwhile, evokes Madoka Magica’s Homura, a cynical, dark-haired girl drawn to the more optimistic Tart. Their dynamic is a clear recycling of Madoka and Homura’s relationship. At this point, however, it remains to be seen if Riz and Tart’s friendship will head in the same direction. Not to mention how Tart’s religious beliefs could get in the way of things.

Guilt-Tripping Recruiting A Teenager With Attitude

There’s also a lot of subtext in how Cube twists Tart’s beliefs in order to get her on its side. Its methods not unlike how many would use faith as a means to get someone to fight for their cause. Cube asks Tart, “You humans have legends of people giving themselves over to the Devil and becoming Witches, right?” It then adds,

“And your religious laws are unforgiving of Witches, yes?”

Tart replies with an affirmative, giving the creature the lead-in it needs. Like its parent series, Cube’s manipulations are nothing short of disturbing. Given the Faustian undertones of the entire setting, it’s very ironic.

A Time To Laugh

Lighthearted moments contrast with the darker, cosmic horror-tinged atmosphere of Madoka Magica’s setting. Much of this is character humor, like Tart taking great pride in being a devout Christian, or Riz punting Cube across a field in annoyance. In a setting as cynical as the Puella Magi franchise, moments like these are a breath of fresh air.

The manga is first and foremost a work of fiction. That said, there is a clear effort for certain plot points line up with history. Some of these are overt, such as Tart and Riz’s trip to Vacouleurs to meet Robert Baudricourt. Some are more subtle, such as the fairy familiar, a reference to the fairies said to inhabit a tree in Domremy.

Various pages slow the plot down to give the reader the historical context which the story is in. If one pays close attention, they will come out knowing a lot more about the Hundred Years’ War. The volume ends with an essay, as well as additional notes regarding research. A bibliography is promised at the fifth volume’s end. Similarly, the artwork‘s portrayal of Medieval France feels consistent with the overall franchise. Notably, the girls’ Magical Girl outfits fit in, while still carrying the vibrant flair that one would expect from a Magical Girl story.

Puella Magi Tart Magica has an uphill battle, set in a world that actively conspires against its heroines. The first volume pulls no punches in making it clear that it is going to be as historically accurate as possible. It makes up for this by focusing on the characters and their conflicts and hopes, particularly Tart’s. These, at the very least, help distract from the inevitable end and provide an entertaining piece of historical fantasy. The final page will definitely leave readers wanting to see what happens next.