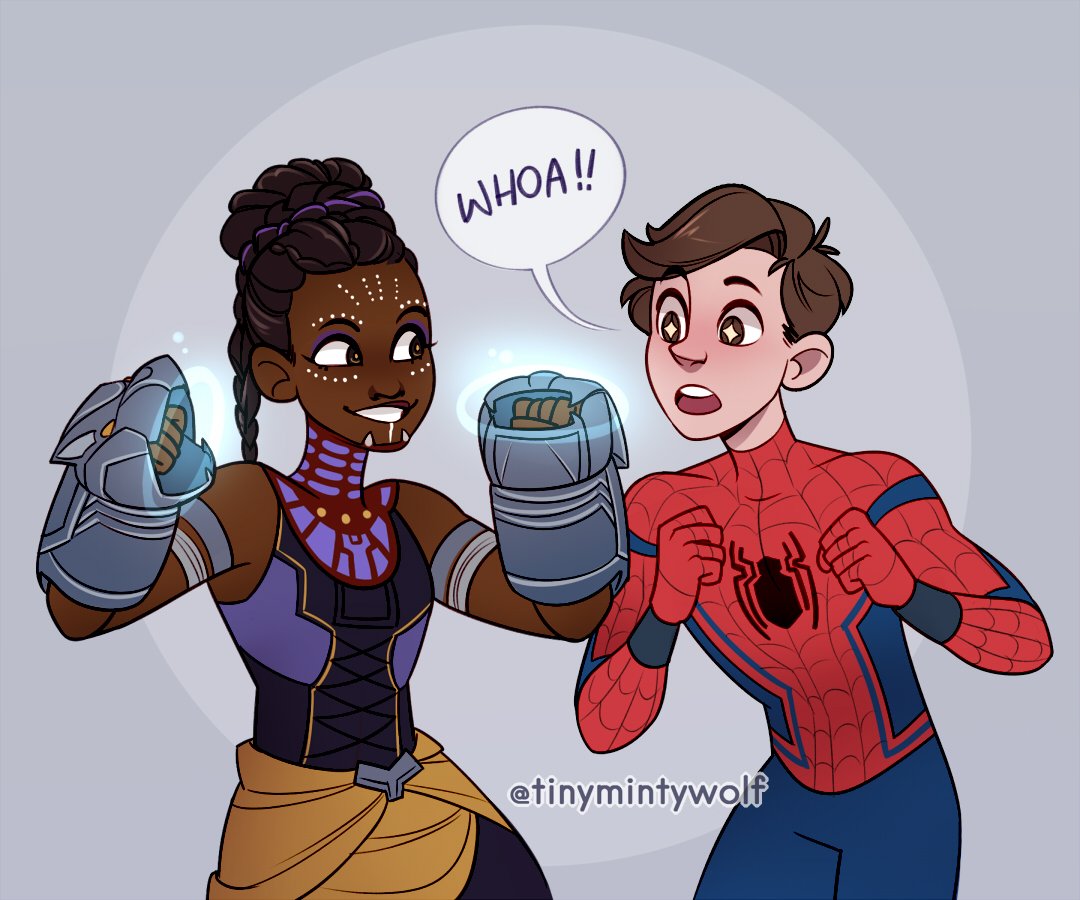 Presenting OTP Tuesday! Each Tuesday I will introduce you to a new One True Pairing! Tune in each week to find out which fictional couple you need to agonize/squee over next. This week’s OTP is a little… different. I need to talk about my love for a couple that really doesn’t exist: Shuri/Peter.

So, like T’Challa/Nakia, there is no ship name for this pairing. Unlike T’Challa/Nakia, that’s less due to newness and more to the fact that this really isn’t a ship. But I’m super worked up about these two, so I need to vent about how amazing it would be. So who are Shuri/Peter? That refers to Princess Shuri of Wakanda and Peter Parker of Spider-Man fame.

I walked out of Black Panther with a whole new troop of fictional loves, but there’s a special place in my heart for Princess Shuri. Shuri is the life of Black Panther. I’m not exaggerating; that’s actually how she’s played. Letitia Wright said in an interview that Ryan Coogler wanted her to play Shuri as “the light and the joy and the positivity of the film.”

I’m going to guess that Wright took that direction to heart because it really shows in the film. Shuri is not the main character of Black Panther, but she was definitely one of the most vibrant. She brought an enthusiasm and sense of fun to a movie that could have been very dour. Black Panther deals with sensitive themes, but Shuri is here to remind us to have fun.

Shuri is the princess of T’Challa, King of Wakanda. She is sixteen years old and a genius. She invents all sorts of new technology, including the Black Panther suit. Thanks to Wakanda’s vibranium resources, Shuri is able to do amazing things that other MCU characters could only dream of. It also helps that, canonically, Shuri is the most intelligent person on Earth.

But it’s also important to remember that Shuri is sixteen. She’s a teenager, sassy and snarky and full of fun. She’s Gen-Z in a nutshell. Shuri is doing amazing new things, yes, she’s super smart, yes. But Shuri is also goofy. She quotes Vines and tells T’Challa she wants to go to Coachella. Shuri is the future — but the future is less bleak than it is memetastic.

The latest Peter Parker comes to us from the MCU, which probably explains why he’s better. This time, Peter is still a kid. He’s a high school nerd, and the latest Spider-Man is more of a teen coming of age movie than it is prototypical superhero fare. But that’s great. It really captures the essence of who this character is.

Peter first popped up in Captain America: Civil War, where he was, along with T’Challa, one of the few good points in the film. But he really comes into his own in his stand-alone premiere: Spider-Man: Homecoming. We already know what he’s like as Spider-Man, but now we get to experience life as Peter.

Life as Peter is… well, not great. He struggles to balance his daily life (especially school) with being a hero. He wants to do more and be better, but he’s still just a kid. At school, Peter excels academically but struggles to fit in. He has a crush on a popular girl. He doesn’t get invited to parties. Honestly, Peter sounds a lot like me in high school, so I love him.

Like Shuri, Peter represents a new generation of characters. He’s Gen Z, too. It mostly comes across when Peter references that really old movie — Empire Strikes Back — but there’s a lot of potential for generational hilarity in future Spidey entries.

Here’s where things get a little tricky. Shuri and Peter have never met. While they are, technically, in the same universe (and will both appear in Infinity War), they are coming from different worlds. So how can Shuri/Peter even be a thing?

I’ve spoken before about how fandom can influence my shipping proclivities. Shuri/Peter is no exception. Tumblr has fallen in love with these characters every bit as much as I have, and they are running wild with speculation about what would happen if these two met. And man are these guesses great.

I walked out of Black Panther with nary a ship in sight for Shuri. Then the internet happened. After seeing so many great posts, I’m now convinced that Shuri/Peter needs to happen. Even if this remains a BROTP (that is, a platonic friendship OTP), I’m fine — I actually kind of like it better as a BROTP. I just need interaction between these two smart, dorky, Gen Z babies.

So since I would normally at this point expound upon my reasons for why these two are fantastic together, I’m a bit at a loss. I have no evidence since there is no evidence. Instead, enjoy some really convincing Tumblr posts that prove Shuri/Peter is the BROTP of dreams:

Well, hopefully meeting at some point. That would really help push the ship along. Both characters are confirmed to appear in Infinity War, which is a start. However, it’s likely that they will remain in their separate spheres in the movie.

Scenes in the trailer have shown Peter in New York. We know that part of the movie takes place in Wakanda. So I’m thinking it’s most likely that these two locations will remain separate; characters have not appeared in both as of yet.

It is always possible that Infinity War will go in a different direction than we think. You never know, with the MCU, what you’re going to get. (I definitely didn’t expect a Vine reference in Black Panther, to be sure). And the fans are really pumped about the idea of a Shuri/Peter introduction.

I guess at this point it’s fingers crossed and wait and see. I have a feeling that both Shuri and Peter have a long future in the MCU. They represent a new age of heroes, and we know that the older group is likely going to leave. There may be a passing of the torch to these babies, which would indicate more interaction.

Stay tuned to find out!

Shuri/Peter is almost as far away from canon as it is possible to be. The only way to be further from canon would be if they didn’t even exist in the same franchise (think someone from the MCU with someone from Harry Potter or something along those lines). Technically, Shuri and Peter are both in the same continuity.

But given that they’ve never met, it’s pretty far away from canon. This is, at this point at least, purely speculation and fan’s imaginations running wild. It may become closer to canon in the future — at least as BROTP — but at the moment, yeah no this is not canon at all.

A lack of canonicity has never stopped the internet, thank goodness. So until Shuri/Peter possible becomes a thing at some point, maybe, I’ll be over here enjoying my Tumblr posts and knowing I’m not the only one who needs this to happen, asap.