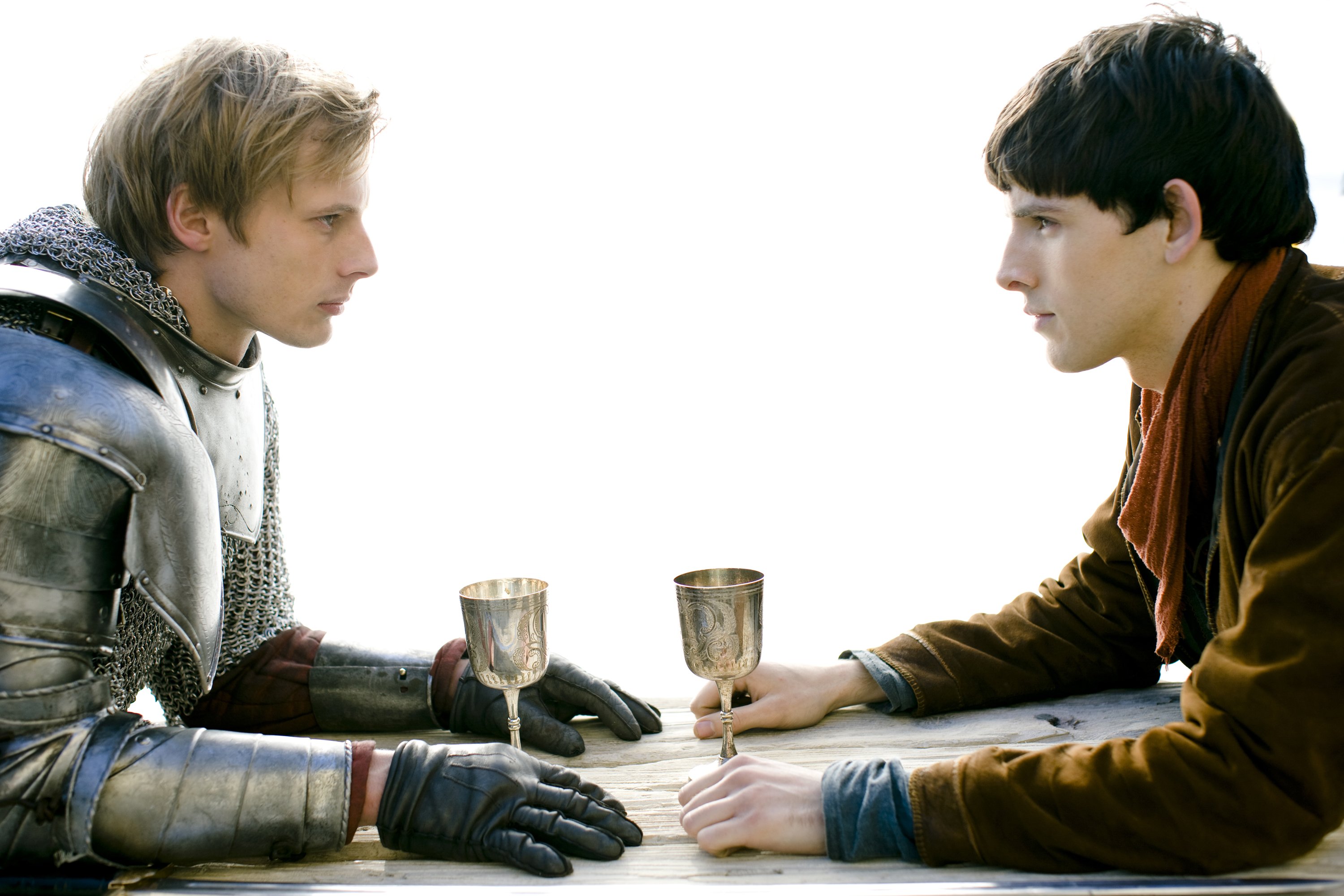 Presenting OTP Tuesday! Each Tuesday I will introduce you to a new One True Pairing. Tune in each week to find out which fictional couple you need to agonize/squee over next. This week: Merthur!

Merthur is the ship’s name for Merlin and Arthur Pendragon from the BBC series Merlin.

When you think of Merlin, you probably think of an old guy with a long white beard, a la The Sword in the Stone. Not so in BBC’s revision of the familiar narrative, which focuses on a teenage Merlin first arriving at Camelot. Merlin grew up in the small village of Ealdor with his mother, Hunith. From a young age, Merlin had magic. But since magic was illegal, it was important for him to stay hidden. While he can no longer hide his talents, Hunith sends him to her brother Gaius, the court physician of Camelot.

Before King Uther Pendragon outlawed magic, Gaius was a sorcerer. He escaped the magical purge but kept a hidden cache of magical books. When Merlin arrives, Gaius sets out to teach him how to control his powers. However, another being has been waiting for Merlin: the dragon Kilgharrah. Kilgharrah reveals that Merlin is the most powerful sorcerer to walk the earth and that he has a grand destiny. According to prophecy, Merlin is destined to help bring about a golden age along with the fated once and future king, Arthur.

Unfortunately, Merlin and Arthur don’t get along. Merlin is assigned Arthur’s manservant, but his defiant ways clash against propriety. Still, Merlin works hard to keep Arthur alive amid numerous assassination attempts, dangerous quests, and battles. Over time, he sees another side of Arthur and begins to look for that destined golden future.

Sadly, it is not to be. Not yet, anyway. Arthur is killed in battle, and despite all Merlin’s magic, he cannot save the king. He takes Arthur’s body to Avalon, to await the return of the once and future king. In the meantime, Merlin roams the earth, always looking for the day when he will reunite with his king.

Merlin also gives us a reimagined version of the once and future king. In Merlin, Arthur Pendragon is an arrogant young prince when we first met him, far from the mythological perfect king. He is a bully, tormenting his servants and showing little to no empathy for his fellow human beings. When Merlin shows up to knock him down a few pegs, Arthur is simultaneously irritated and intrigued. Neither of them is happy when Uther assigns Merlin to be Arthur’s servant as a “reward” for saving Arthur from an assassination attempt but settle in to make the best of a bad situation.

Over time, though, we see from Merlin’s perspective a different side of the prince. He really is arrogant, but considering how he was raised, that’s to be expected. But contrary to appearances, Arthur does care for the people around him. He shows far more concern for the citizens of Camelot than Uther, and never hesitates to put his own life on the line to save others – even Merlin.

He doesn’t look down on those of a lower station and even starts to question Uther’s hatred of magic users. Arthur also struggles with the weight of Uther’s expectations, and a strained relationship with his only remaining family. When Uther dies, Arthur is forced to take on the heavy burden of leadership at a young age. From the start, he establishes himself as a far more just ruler. He allows non-nobility to take up positions of prestige, even marrying a former servant.

Unfortunately, Uther made enemies that can’t forgive Arthur, even as he proves himself a different sort of ruler. In the final battle, Arthur is defeated, just as Kilgharrah foretold. The prophecy holds out hope, though: when Albion is in great need, Arthur will return.

Merthur is one of those wonderful ships that works as either a platonic or romantic OTP. No matter how you read the relationship, it’s clear that the Merthur dynamic is the foundation of the entire show. No other relationship – including the canonical romantic ships — comes close to the emotional impact between Merlin and Arthur. Personally, I like to read it romantically — I’m always looking for love in all the wrong places. But no matter what, Merthur will break your heart.

Ah, my favorite relationship dynamic. There is just something so utterly satisfying about seeing two people who initially can’t stand each other come to a better understanding and develop a real, deep, and lasting connection. We definitely get this in Merthur. When they first meet, it’s antagonism at first sight. Merlin takes offense to Arthur tormenting his servant, and Arthur is offended that this peasant doesn’t show him “proper” respect. They even got into a quick duel. Merlin uses his magic to try and knock Arthur down a peg but is ultimately defeated by his own clumsiness.

The antagonism is slow to fade. When Kilgharrah tells Merlin that he is destined to guide and protect Arthur, he remarks that he’d rather just let Arthur die. And yet, when an assassin tries to kill Arthur at a banquet, Merlin steps in to save the day. Unfortunately for both of them, Uther decides that Merlin shall be Arthur’s servant, and the two are forced to deal with each other day in and day out. They clash constantly, at first. But, slowly but surely, they develop a tentative friendship.

As they go on adventure after adventure, a bond forms between them. Merlin begins to see a better side of Arthur, and Arthur begins to appreciate all that Merlin does for him (though he has no clue how much Merlin actually does with his magic). They become far closer than most lords and servants. Arthur even begins to depend on Merlin for help and advice. They still bicker and fight, of course. There are appearances to keep up, after all. But by the end of the show, their bond is unshakeable. Their relationship becomes their everything, and this bond lasts well after Arthur’s untimely death.

The bedrock of the Merthur relationship is loyalty. Once upon a time, these two characters couldn’t stand the sight of each other. They would gladly have consigned the other to hell. Yet by the end of the series, they have become so essential to each other that loyalty is as natural as breathing. And this is not the pale loyalty of a servant to his master. This isn’t even the loyalty of a subject to a king. The loyalty inherent to Merthur is brotherhood, partnership.

This loyalty is not one-sided. Merlin, of course, has been told of his destiny. He knows it is his responsibility to protect Arthur and help him start a golden age for Albion. But Arthur knows nothing, not of his destiny, or Merlin’s magic. He is loyal to Merlin because of everything they have been through together. Merlin accompanies Arthur on every dangerous quest, every hunting trip, and every battle, despite no training or expertise in fighting. To Arthur, who does not know of Merlin’s power, this is a demonstration of his true loyalty. Being good and just, Arthur rewards that loyalty with his own.

Even from the start, when they could barely stand each other, there is a hint of loyalty to come. Early in the show, Merlin is poisoned trying to save Arthur from another assassination attempt, by drinking poison meant for the prince (at Uther’s order, of course). Although Uther forbids Arthur from seeking out the antidote, Arthur goes anyway. Merlin’s magic saves Arthur from danger on his journey, despite Merlin currently in a coma from the poison – his magic knows the power of his loyalty. Similar situations will occur throughout the show, with one of the two risking it all to save the other.

The agony of being a Merlin fan is knowing that the show ended and there is no more. Merlin ended in 2013 after five seasons and a horrible cliffhanger. In the fifth season, Arthur becomes king after Uther is murdered. Despite promises to overturn his father’s ban on magic, the fact that magic was involved in Uther’s death convinces him that magic is still evil. Arthur tries to be a good king, but his rule is threatened by his half-sister Morgana, a sorceress who resents Arthur for taking her inheritance.

Despite Merlin’s best efforts, he cannot stop Morgana from gaining in power. The real issue, however, comes from the young Druid Mordred. Merlin saved a young Mordred from death, and years later, Mordred returns to become a knight of Camelot. However, having learned from Kilgharrah that Mordred was destined to kill Arthur, Merlin was suspicious. His suspicion eventually turned Mordred away, leading him straight to Morgana.

The two launched a massive attack on Camelot’s armies. In this final battle, Merlin shows up in disguise to help Arthur, but he is too late. Mordred fatally wounds Arthur, and though Merlin tries to save him, even taking him to Avalon for healing, he cannot stop the king’s death. In the end, Arthur learns that Merlin is magical and has been using his magic for good all along. He finally recognizes what Merlin has done, and thanks him – just in time to die. Merlin, heartbroken, sends Arthur’s body to Avalon, to await his return.

The final scenes of the show feature Merlin, old and weary, in the modern world. He still awaits Arthur’s return. The ending is heartbreaking, and the audience is left waiting too. Just like Merlin, though, we are still waiting, with no end in sight.

As a BROTP, Merthur is as canon as it gets. The Merthur relationship is the bedrock on which the whole of Merlin rests. The show is designed to show a different view of the relationship between the fabled King Arthur and his magical advisor Merlin. They definitely succeed, by showing how things might have developed if they were young peers. Other relationships come and go for these characters, including Arthur’s ill-fated romance with Guinevere, but no matter what, these two always come back to each other.

Now, romantically speaking, no, Merthur is not canon. There is nothing on the show to indicate that these two have anything other than an unusually strong, platonic relationship. If anything, reading this relationship platonically is better. It showcases that platonic relationships are just as important as romantic ones. It also shows a good, non-toxic relationship between two men. Merthur does have a machismo covering – mostly on Arthur’s part – to cover up any emasculating moments. But that’s just the surface level. At their core, Merthur is a very soft relationship built on mutual trust and respect.

No matter how you read Merthur, it’s still a great relationship. If you want to read it romantically, there’s plenty of fanfiction out there ready to fill your needs. (I just fell down this rabbit hole myself.) Finding canon material requires some reaching. But if you want a good, platonic friendship, Merlin has you covered. There may only be five seasons, and you may end up crying endlessly every time you get to the finale, but the show definitely delivers in terms of great Merthur content. And, hey. There’s fan fiction for that pain, too. Plenty of writers are willing to show what happens next – check them out!