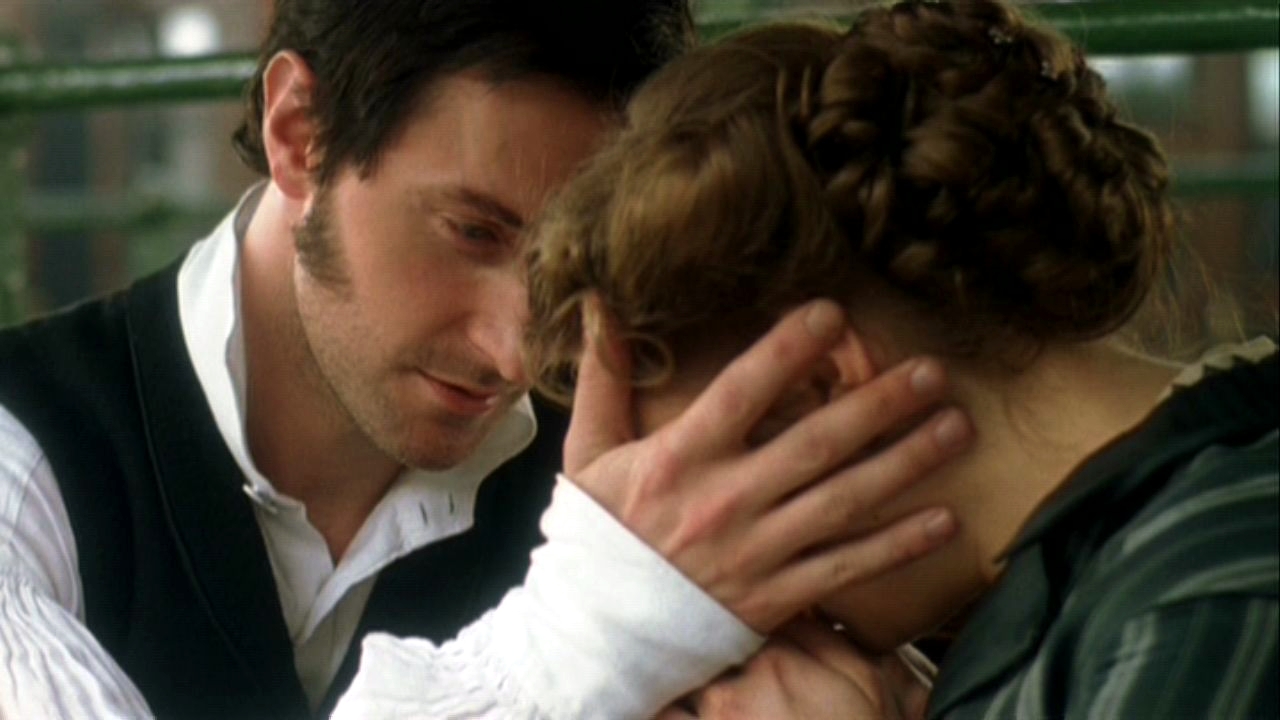 Presenting OTP Tuesday! Each Tuesday I will introduce you to a new One True Pairing! Tune in each week to find out which fictional couple you need to agonize/squee over next. For romantic February I wanted to focus on some of my favorite romances. Up this week: Margaret/John.

Margaret/John refers to Margaret Hale and John Thornton from the BBC period miniseries North & South. North & South is based on a novel of the same name by Elizabeth Gaskell, published in 1855.

Margaret Hale is the protagonist of North & South. Growing up, Margaret had an idyllic life. Her father was a in a small village church in heavenly Helstone. She had love, education, and family. However, paradise never lasts and eventually, Margaret is forced to see a different side of the world when her father leaves the church and they move north to Milton.

In Milton, Margaret has a hard time adjusting. Northerners are brusque and businesslike, very different from the polite company Margaret is used to keeping. She manages to make a friend in Bessy Higgins, a mill worker, even as she makes an enemy of Bessy’s boss, John Thornton, owner of Marlborough Mills. When Thornton tries to help the Hales, Margaret goes to confront him and is shocked by his brutality.

Thornton tries to mend fences, explaining that he was trying to protect his mill and his workers, but Margaret has formed a negative opinion of him that won’t be shaken. This opinion is not helped when Bessy takes ill from poor working conditions, though this was no fault of Thornton’s, and eventually dies. When Margaret goads Thornton to speak to his striking workers, then uses her body to shield him from their violence, he proposes to her, thinking his feelings for her are mutual.

However, Margaret rejects his proposal, not altogether kindly. Things get even worse when Margaret is seen out at night with a man, who Thornton doesn’t know is her brother. In the end, Margaret loses everything in Milton. Her parents both die, and she leaves, only to inherit a large amount of property from her godfather, including Marlborough Mills. Having come around to the merits of Milton – and Mr. Thornton – she returns north, ready to start the next chapter of her life.

John Thornton is the leading love interest in North & South. A Milton man through and through, John’s life hits an early snag when his father, a mill owner, loses all his money through speculation. After his father takes his own life, John must work hard for every inch. He and his mother scrape back their money and manage to regain their position in society. As an adult, John has a good life. He owns Marlborough Mills, one of the better mills in Milton, and lives a comfortable life with his mother and sister. They have prestige and money, everything he lacked as a child. But things go awry when the Hales arrive in Milton and shake things up.

John originally hires Mr. Hale as a tutor. Since he had to leave school to provide for the family, he wants to catch up on his education. However, it isn’t long before Mr. Hale’s fiery daughter catches his eye. Though they disagree constantly, John’s stoic business focus clashing with Margaret’s concern for the poor, John admires Margaret for her kindness, intelligence, and beauty. Unfortunately, he thinks her entirely out of his league until the strike riots.

Even then, he does not think she loves him, but proposes because of social convention, though he would be pleased to marry her. When she rejects him, he is hurt, severing his ties with the Hales. He cannot sever his feelings, however, and pines after Margaret from afar. When his business starts to fail, troubles from the strike and poor sales hurting them, John faces the end of Marlborough Mills. A surprise inheritance allows Margaret to proposition John about working together to keep the mills open. He has other ideas, however, and sees that finally, he can have the love he craves.

North & South taught me the true meaning of romance. I’m constantly in awe at the progression of their relationship and swooning over the pure, unadulterated romance that takes place on screen. In the course of four episodes, I’m done for. There will never be another love story like Margaret/John for me.

Margaret/John has it all. Sweeping romance with a Victorian flair. Questions of propriety and social reputation. Misunderstandings. Brooding. Pining. The kind of drawn out love story you can’t accomplish in a two hour movie, but without being so drawn out over seasons upon seasons that I die waiting. I’m in love with their love. Margaret/John gave me life.

And we’re back with my favorite trope! Normally, of course, it’s enemies to friends to lovers, showing the beautiful progression between two people who start off at odds, change their minds and become friends, and eventually realize they’re in love. However, Margaret/John kind of skipped the friends step altogether, most likely because John has been in love with Margaret since like, day one. Unfortunately, Margaret has had John down as an enemy from day one.

The first time Margaret meets John, it doesn’t go well. She was already annoyed to learn that Mr. Thornton had intervened in her family’s attempts to find lodgings. When she goes to the mill to speak with him about his interference, she is left waiting for so long that she eventually wanders out into the mill to find him.

That’s where it all goes wrong. When he sees one of his workers smoking on the floor, John loses it. Having previously seen the destruction that fire in a mill can cause, he’s pretty intense about no smoking. He immediately fires the worker, even punching him for putting them all in danger. That’s not a great first impression for compassionate Margaret. Although John tries to explain himself, Margaret has already closed herself off. John wants to be friends.

Margaret won’t have it. As John’s admiration for Margaret grows, she continues to see him in a negative light, to the point where she says cruel things after he proposes. It’s only after her rejection that Margaret comes to see the truth, that there is a kind man underneath John’s bluster and business. When he helps her family, she starts to admire him as well, though thinking she has lost her chance. They never do quite become friends, but it ends up alright anyway.

For years I have railed against Pride and Prejudice and its unfair reputation as the height of romance. I’m not a fan of Austen, and I once proudly proclaimed in a graduate seminar that Mr. Darcy was “a colossal asshat.” The love story in Pride and Prejudice is hampered by the fact that its characters are insufferable. But while Pride and Prejudice may not deserve top crown in the period romance genre, North & South definitely does. It has many of the same plot points as Austen, without the contemptible characters. Margaret/John is, in many ways, also a story of pride and prejudice, of too hasty judgments, of class differences and society keeping two people apart.

It goes much further, though. In Austen, the romance was awkward and painful. Mr. Darcy’s proposal is riddled with condescension, him judging her for her poor status. There is also a sense of inherent cultural misogyny, as Mr. Darcy is seen as “better” than Elizabeth. She is correct to reject him. For her part, though, she is often almost needlessly cruel and doesn’t seem to see the error of her ways. Margaret/John turns the narrative on its head.

This time, it’s the woman who is seen as better. While John has more money, Margaret is from a higher class. This helps equalize the two of them, and no longer is the female character seen as “lower.” There’s also genuine kindness and romance here. John’s proposal is far from Mr. Darcy’s rudeness. Margaret’s rejection is wrong, but she apologizes and learns from the experience. Margaret/John works because the two come together, in the end, as equals and partners who love each other. John always sees Margaret as too good for him. Margaret speaks from kindness. Margaret/John is clearly superior.

Nothing is really next for Margaret/John, unfortunately. North and South written over 150 years ago, and Gaskell didn’t provide a sequel. Unlike Pride and Prejudice, which has seen adaptive sequels like Death Comes to Pemberley, there have been no such attempts to continue the story told in the North and South. What we see is what we get, essentially. There is no next because the story has been finished. Unless someone writes a sequel (hey, public domain, someone take this up), we’re left to speculate on what would happen next. Or, in my case, to immediately start reading fanfiction (a sad 42 stories exist for North & South on Archive of Our Own!).

So where does that leave us? By the end of the miniseries, things have reached the point where many a romance leaves off – with the two main protagonists reunited and romantically committed. When Margaret proposes a purely business relationship, John instead shows Margaret that they can be more than that, even going so far as to kiss her in a public place (the miniseries takes liberties). The two then returned to Milton together, ostensibly to start their happily ever after as a married couple and joint owners of Marlborough Mills.

But there’s so much more going on. At this point in time, Margaret has lost both her parents and her godfather, the remaining support in her life. She is also now a wealthy heiress, whereas John has lost nearly everything (but still has his family). A sequel could provide some much needed closure. Okay, sure, they’re going back to Milton, but what next? How will the people of Milton (including John’s mother, who dislikes Margaret) react? How will they go about reopening Marlborough Mills? Will they actually be happy? I need a sequel, stat.

The good news is, like all the best romances, Margaret and John come together in the end, having weathered misunderstandings and hurt feelings, and are able to, presumably, live happily ever after together. The guy gets the girl, or vice versa, everything works out in the end. It’s a period romance, what else would you expect? Now, granted, Margaret and John go through a lot to get to this point. Because North & South is a miniseries, not just a single movie, we get to see more depth. We get to experience the progression of their relationship more than would be possible in two hours (or often less). We saw Margaret first arrive in Milton and decided to dislike John. And, we see John try to make amends but fail.

There’s a long road for Margaret/John to actually become a reality. They have to weather family drama (Hannah Thornton’s disapproval of her son’s choice, Margaret’s brother and the drama and secrecy he brings); societal drama (the mill masters clashing against the mill workers, and Margaret’s compassion clashing against John’s pragmatism); and economic drama (an imbalance of wealth). But in the end, the love between Margaret and John is strong enough to overcome the obstacles in their path. Or rather, the characters are strong enough to grow and change.

Each sees the errors of their ways. Each has the capacity to make better choices. This allows them to come together as equals. So yes, thankfully, Margaret/John is canon. And what a delight it is, too. This relationship has all the hallmarks of a grand period romance, and in my opinion definitely deserves more appreciation. And please, please, more fanfiction. Because I’ve read it all and I’m dying here. I need more Margaret/John love!