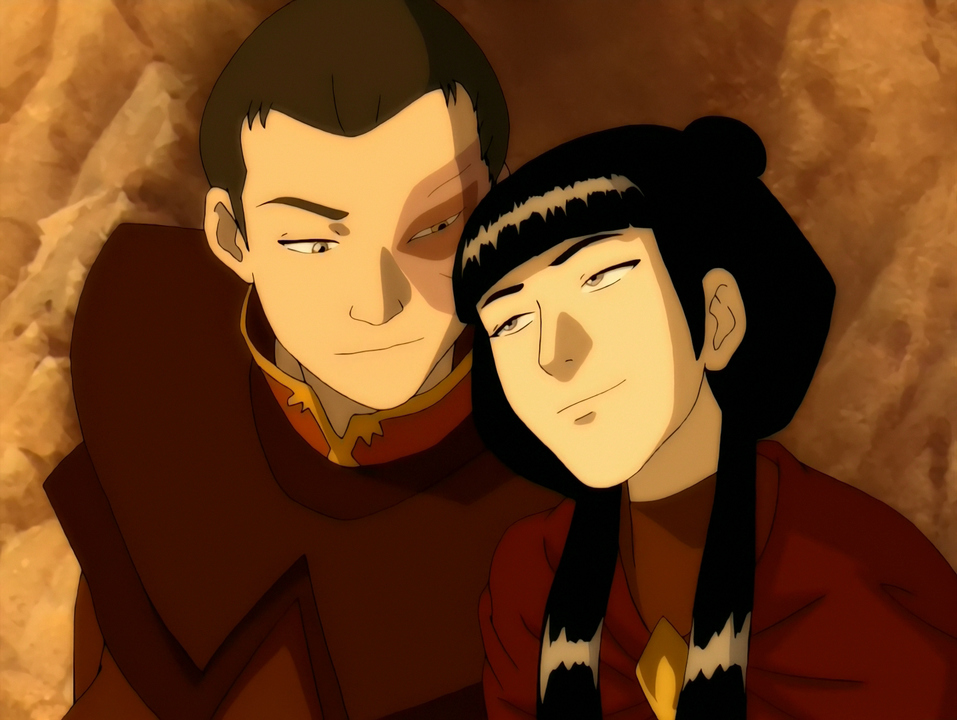 Presenting OTP Tuesday! Each Tuesday I will introduce you to a new One True Pairing. Tune in each week to find out which fictional couple you need to agonize/squee over next. This week: Maiko!

Maiko is the ship name for Prince Zuko and Mai from Avatar: the Last Airbender.

Zuko, prince of the Fire Nation, is one of the most complex and interesting characters in a show full of complex and interesting characters. When we first meet Zuko, he is the primary antagonist of the show. He was banished from his homeland and given a fool’s mission: to capture the Avatar, who has been missing for a hundred years. Since he cannot return home until he does so, he is relentlessly obsessed with the avatar. He travels the world with his uncle Iroh, who teaches him firebending and provides some much-needed guidance.

The avatar does actually return, and Zuko sets out to capture him and restore his honor. However, after he fails to do so, Zuko’s father Fire Lord Ozai decides that he must come home – as a prisoner. Zuko’s sister, Azula, is sent to capture him. He and Iroh must go on the run and hide their identities. They ended up in the Earth Kingdom capital, Ba Sing Se, the last great stronghold against the Fire Nation armies. Although it looks like Zuko has finally found a new purpose, in the end he joins Azula in capturing the city.

Zuko returns home for the first time in years, where he is celebrated by his father for finally regaining his honor. However, he knows that what he did was wrong, and eventually decides to make things right. He leaves the Fire Nation, by choice this time, and joins the avatar, Aang, as his firebending teacher. Along the way, they both learn new things, about each other, themselves, and firebending. In the final battle of the hundred year war, Zuko faces off against Azula. After she and Ozai are defeated, he takes his place as the new Fire Lord, ushering in a new era of peace.

Mai is the daughter of a prominent Fire Nation politician. When we first met her, her father was the newly appointed governor of Omashu, a great Earth Kingdom city that has finally been captured. Despite this life of privilege, Mai is not happy, or grateful; she’s bored. Luckily, excitement comes to Omashu when Princess Azula comes to visit. Now that Azula has been assigned to track down her brother, she wants to assemble a small strike team, rather than go in with a show of force. She recruits Mai, a deadly weaponist and Azula’s childhood friend, along with their other friend Ty Lee, a martial artist.

Despite being a nonbender, Mai is just as efficiently deadly as any other warrior. However, she lacks any enthusiasm for the mission, frequently showing how bored and unimpressed she is. Azula puts up with it because Mai’s skills are valuable. Mai, for her part, goes along with the plan to have something to do – and also because she has a longstanding crush on Zuko. This all pays off; when Azula convinces Zuko to join her and return home a victorious hero, he starts a romantic relationship with Mai.

However, things go awry when Zuko’s conscience comes into play. He breaks up with Mai via letter before he leaves the Fire Nation, and she’s furious. So, when Zuko is captured trying to break into a prison run by Mai’s uncle, she comes to confront him. She calls him out for his stupid actions, forcing him to face the consequences. However, when Azula tries to kill Zuko, Mai betrays her to save her ex-boyfriend. Zuko escapes, but Mai is imprisoned for her treachery. She spends the rest of the war in prison, but at the end, rejoins Zuko in his moment of victory.

Why Is Maiko OTP?

I’ve been in a real AtLA state of mind lately, and, as always, determined to argue against Zutara. Maiko is, in my opinion, a much better ship that is frequently overlooked. While it’s understated, that makes sense given the characters. It’s not a central part of the overall Avatar story, but Maiko adds a special something to the show. It’s just as well-developed and nuanced as anything else, and really deserves more love from the fans.

What makes Maiko great is that, once they are together, neither character changes who they are. Both Mai and Zuko are broody, somewhat grumpy emo kids. It would be easy for that to all change once they got together, their personalities rewritten now that they have found love or whatever. Suddenly, the sun would be shining brightly and everything would be rainbows and turtleducks. Luckily, that’s not what happens here. Instead, we just had two broody, somewhat grumpy emo kids together. The sun is still an ugly orange, it’s just less annoying when they’re together.

It’s nice that these two characters don’t undergo a radical transformation just because they start dating. After all, it makes sense that they are drawn together because of their mutual moodiness; changing that would undermine the basis of their relationship. It would also undermine their characterization. One of Zuko’s best lines comes when Sokka, having been caught sneaking out, asks if he’s happy to be proven right – Zuko says he’s never happy. Mai, for her part, oozes boredom and a general air of being over it. They’re still themselves when they’re together, just with a partner who understands.

We even see the negative ramifications of this moody pairing. When the Fire Nation kids go on vacation, we see Maiko put to the test. Zuko, grumpy and insecure, is upset that another guy is talking to Mai at a party. He acts predictably badly, and he and Mai have a big fight about their emotions. Mai accuses him of having a temper, and Zuko accuses Mai of not caring about anything. Both characters have flaws, and acknowledge these flaws. They’re a point of contention in this moment. But in the end, they come back together, because they understand each other. They belong together.

Another excellent addition to the way the show portrays Maiko is how long the ship has been running. Although it’s been years since Zuko was home, Mai still blushes at the thought of seeing him when Azula recruits her for her team. We see a little flashback of Zuko and Mai as kids, and a hint of something between them, even if they’re both kids who are not at all interested in romance. We also see Azula mercilessly teasing them. Clearly, there’s a longstanding attachment there, even if Mai assures Azula that she’s fine hunting Zuko down.

That longstanding attachment leads to an excellent payoff. The payoff is not, however, when Zuko and Mai begin dating after he returns to the Fire Nation. While this is a cute interlude, it’s not meant to last. Zuko has doubts the entire time he’s home, and we the audience know that he’s not meant to stay there, crown prince and honored hero, with Mai for the rest of his life. So, it doesn’t come as a great surprise when he leaves home, with only a note to explain his actions to Mai.

No, the payoff comes when they reunite. In the prison, Mai’s anger is a sign of how much she cares about Zuko, despite always trying to hide her emotions. He tries to explain himself, but she rightfully points out how much his actions hurt her. But she still cares about him, as seen when she betrays Azula to save Zuko’s life. Her iconic line – “I love Zuko more than I fear you” – will be the catalyst for Azula’s magnificent downfall. It’s also a sign of how much this relationship means to these characters. So it’s only right that, in the end, they are reunited and give it another shot.

What’s Next For Maiko?

This is another one of those times that I wish I’d read more of the Avatar comic books (if anyone wants to buy them for me, Christmas is coming up!). As things stand at the end of AtLA, Mai and Zuko have reunited. They are able to move on from their separation, although Mai makes a point of threatening Zuko if he ever does something so stupid again. Overall, though, they seem happy to get back together and move forward as a couple. The finale left things looking pretty rosy for Maiko fans.

Then came the comics. In the first couple of graphic novels, the Promise series (which I actually have read), cracks form. Zuko starts taking advice from his father on how to be the Fire Lord, something Mai disapproves of. More importantly, though, she disapproves of the fact that he kept his meetings with Ozai a secret, not trusting her with this information. Mai breaks up with Zuko, and there are hints that one of Zuko’s bodyguards, the Kyoshi Warrior captain Suki, may have some feelings involved.

Things don’t get better in subsequent comics. Mai starts a new relationship, but it’s based on duplicity, and seems designed to fail. The relationship does end, but clearly has an effect on Mai while it lasts. After that, who knows? It’s still a long time until Legend of Korra, the follow-up series, takes place. And while we meet Zuko in LoK, we haven’t seen anything of Mai. Fans were left to speculate on what might have happened between the two. However, unless we get more comics from the creators, we’re likely to be left guessing. Where did Mai and Zuko go, moving forward? Did they come back together? Was their split permanent? We may never know.

This is a trickier question than normal. On the one hand, Maiko is definitely canon. Mai and Zuko clearly form a romantic relationship. However, the enduring canonicity is left up to debate. If we take the show itself as the determining factor, then yes, Maiko is canon. When the two broke up in the third season, it was a temporary split. They eventually reunited, and the show ended with the relationship seemingly stronger than ever. Judging by that metric, yes, Maiko is canon. It’s in the comics’ continuing adventures that things get screwy.

As things stand, Mai breaks up with Zuko, and it seems to be sticking, at least for now. While Maiko was canon, it no longer was. Given that the comics are official continuations of the story told in the show, it means that we must take their separation to heart. However, never say never – we don’t know for a fact that they never get back together. Legend of Korra offers a unique boon to shippers. By taking place seventy years after the original show, it offers some clarity. We know that Kataang is canon; Katara and Aang marry and have three children.

But we’re left in the dark so far as Maiko goes. While we meet Zuko in the show, there’s no sign of Mai. And while Zuko has a daughter, Izumi, her mother is not named. It could be Mai, but it could be someone else, too. There’s still a lot of blank space between Avatar and Korra, and in that blank space could be any number of Maiko permutations. Maybe they get back together, and Izumi is their daughter. Maybe Zuko married someone else. For me, I’ll keep on hoping that Maiko end up together.