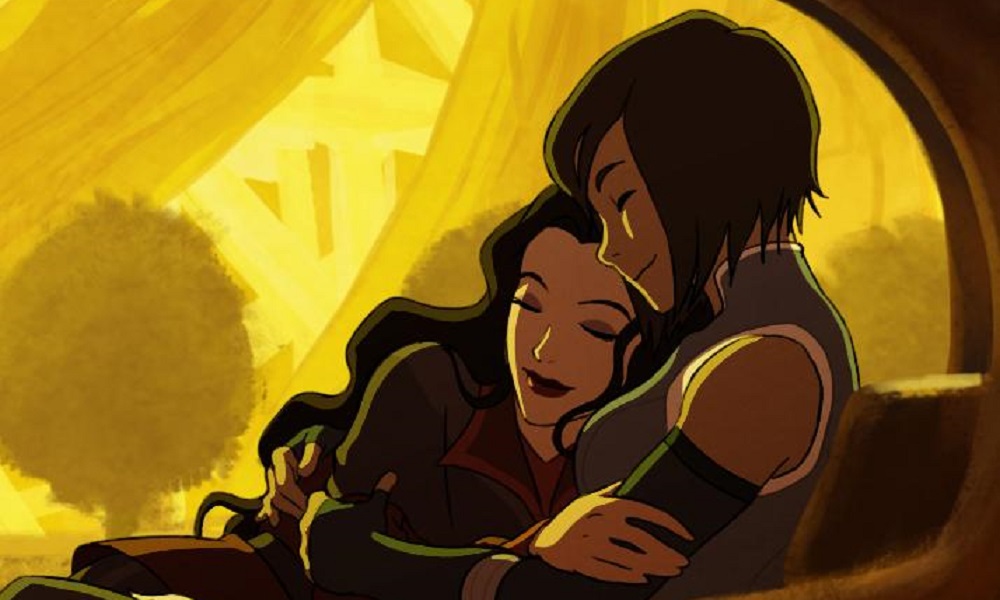 Presenting OTP Tuesday! Each Tuesday I will introduce you to a new One True Pairing! Tune in each week to find out which fictional couple you need to agonize/squee over next. Up this week: Korrasami.

Korrasami is the name given to the ship of Korra and Asami Sato from the show Legend of Korra. Legend of Korra is the follow-up to the ever amazing Avatar: The Last Airbender.

The avatar in The Last Airbender was Aang, a peaceful airbending monk. He was innocent, cheerful, and endlessly optimistic. Korra is… well, not. She is very different from Aang, despite being his reincarnation. Korra is aggressive, high-spirited, and quick-tempered. She’s a hotheaded teenager who doesn’t always get along with authority. That being said, over the course of the show we see Korra grow and mature into a great avatar.

She goes to Republic City to learn airbending, her final element, and to help Aang’s son Tenzin keep the peace. Along the way, she learns about herself and her past. She also makes new friends, develops a serious crush on firebender Mako, and joins a pro-bending team. But most importantly, Korra stops a plot to remove bending from the world entirely, saving the world as they know it.

Over the next three seasons, Korra goes through more adventures. She makes many mistakes along the way, but she also learns from them. She saves the world a multitude of times (seriously, things just keep going wrong). Korra even ushers in a new age of harmony with the spirit world and balance in the physical world. At the end of the series, she is a mature, fully-realized avatar who lived up to Aang’s legacy.

Asami is one of the friends that Korra makes along the way, although they didn’t start out that way. At first, Asami enters the show as a love interest for Mako, the boy Korra is crushing on. At first, Asami seems pretty terrible. She’s a rich girl (only really important/rich people in this world have last names), she seems to be there solely to cause trouble with Korra, and you don’t root for her.

However, Asami turns out to be one of the best characters in the show. The showrunners took a character who could have remained a really one-note minor social villain and turned her into a kickass heroine. Asami is a non-bender; that is, she cannot manipulate any elements. However, Asami is also a bonafide genius, who uses her technological know-how to kick just as much ass as any bender in the show.

In season one, Asami’s rich inventor father turns out to be a villain, and there’s a moment where she might join him. Instead, Asami turns on her father, supporting her new friends and the bending societies. She uses her dad’s work to create new inventions, turns her father’s company around after it comes close to bankruptcy, and helps Korra save the world time and time again.

Asami also becomes Korra’s best friend. Although they started out as minor antagonists, both fighting over the same guy, they quickly bonded when Mako was out of the picture. They are very different people; Korra is more physical and Asami more intellectual, for instance. However, they understand and trust each other. Watching the two of them fight (other people) is like poetry in motion. I’m glad Asami turned out the way she did.

Why is Korrasami OTP?

Korrasami is the greatest ship to come out of Legend of Korra (and there are some other great ships, too). Korrasami is a ship where two different people come together, balance each other out, and make each other better and stronger to achieve something greater than the sum of their parts.

Enemies to Friends to Lovers?

One of my favorite tropes in fiction (or fanfiction) is friends to lovers. I really enjoy when a couple starts out as friends, and it develops into more. I also love the subtrope enemies to friends to lovers, where they first start out as antagonists and then become friends and so on. This shows interesting character progression, and allows for a lot of revelations like “you’re not so bad after all” or “I guess we’re not so different.”

Korrasami does an excellent job with this trope. Sure, their “enemies” situation is a little lame. At this point in time, love triangles are so overdone and should be banned. But what a twist ending — the two girls who were fighting over the guy fall in love with each other? What a great way to rewrite a tired, boring trope.

Plus, watching Korra and Asami figure out that, if they aren’t fighting over Mako, they get along great is awesome. Too often pop culture pits girls against each other in some sort of stupid battle for a man. Watching two girls realize that man is lame and not important, then seeing the potential for a friendship is great. Once Mako is out of the picture, these two become even more badass and awesome leading ladies.

The progression to a romantic relationship further solidifies the connection between the two. They became best friends easily, so it follows that they would fall in love easily. Yes, they have to go through a lot along the way. Each faces danger, heartbreak, and failure along the way. But each is also there to help the other through. In the end, they turn to each other as innate sources of comfort and safety, which is lovely.

Korrasami is also amazing because it’s an example of a healthy, awesome relationship between two bisexual characters. So often in life and in pop culture, bisexuality is overlooked or dismissed. Characters are assumed to be either straight or gay, no in betweens allowed. People only focus on a current relationship or crush and make assumptions based on that. Bi erasure is real.

But here we have two characters who are demonstrated to be interested in more than one gender (there are no indications if transgender characters exist in Avatar, so I’m going with bisexual rather than pansexual). The Mako love triangle might have seemed lame, but it serves a vital function. By showing both Korra and Asami to be interested in Mako (including physical intimacy), you cannot deny that they are interested in men.

What’s even better is who we see is bisexual. Korra and Asami are very different people. Bi people are not all the same. Korra is the protagonist and the hero. Bi people can be leads and can save the world. Asami is intelligent and a powerful business owner. Bi people can be pillars of the community. If we show that anyone can be bi, we can start undoing years of bi erasure.

Plus, neither of them dies. Let’s bury the “bury your gays” trope, and show that queer people can have happy, lasting relationships.

What’s Next for Korrasami?

Unfortunately, Legend of Korra ended in 2014 after four seasons. However, fans wanted more story for these characters — especially the Korrasami storyline — and the showrunners responded. Legend of Korra has continued in comic form. Legend of Korra: Turf Wars is a trilogy that picks up the story shortly after the series finale. The second book of Turf Wars actually comes out tomorrow, so pick it up to follow along!

YES! (Man does it feel good to say that for once). Korrasami is confirmed canon by the showrunners, though it was not officially confirmed on screen. In the show, it’s another case where it seems to be definitely heading in that direction, but nothing officially happens (like StormPilot!).

However, after the conclusion of the show, showrunners Michael Dante DiMartino and Bryan Konietzko have both confirmed that Korrasami is canon. The concluding shot of the show is actually supposed to mirror the canon relationship from The Last Airbender, showcasing stylistic continuity while hinting at the truth. Konietzko also released art that depicted Korrasami on a date (it’s super cute).

Turf Wars is picking up full-steam ahead Korrasami. The first book of the comic so far has dealt with the ramifications of a same-sex relationship. DiMartino, who wrote book one of Turf Wars, wanted to show that Korrasami won’t always be smooth sailing by showing social stigma. According to him, he wanted queer fans to have a relatable story. See what I mean about the importance of representation?

With book two soon to come out and book three on the horizon, I can’t wait to see what else Turf Wars has in store for my favorite couple.