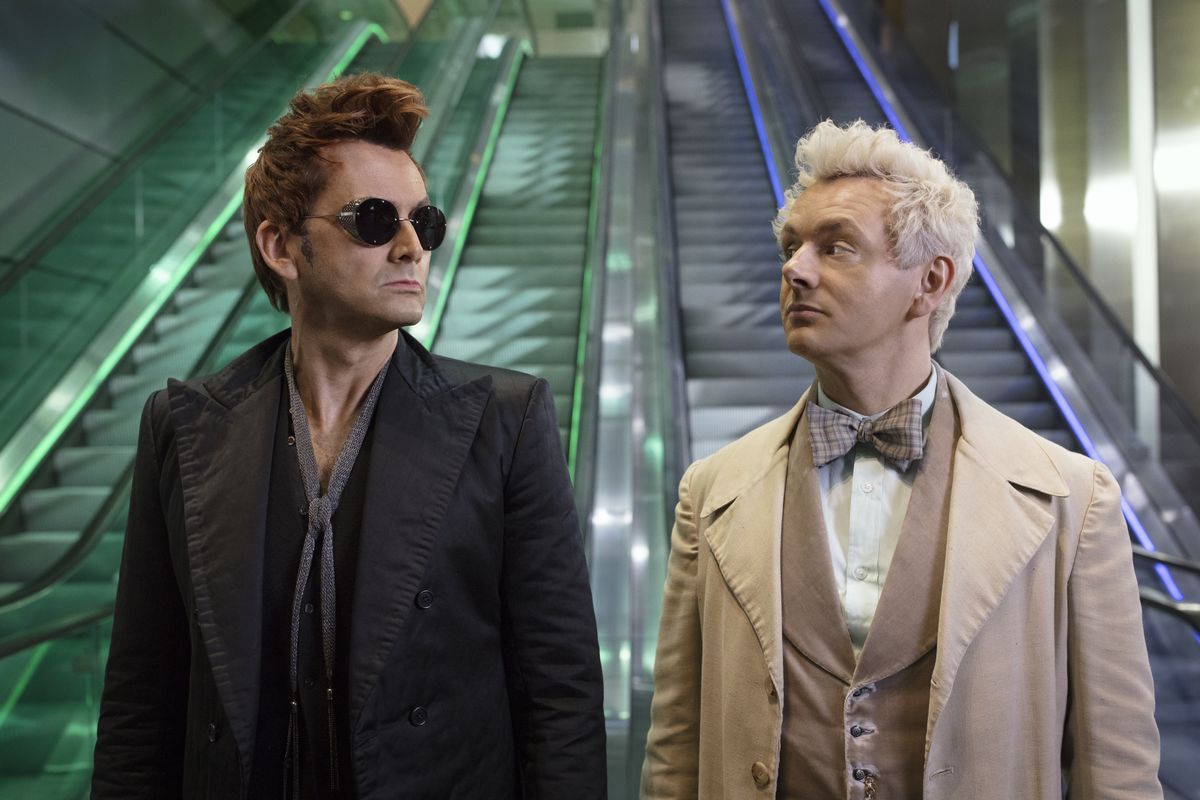 Presenting OTP Tuesday! Each Tuesday I will introduce you to a new One True Pairing! Tune in each week to find out which fictional couple you need to agonize/squee over next. This week, let’s talk Ineffable Husbands!

Who Are Ineffable Husbands?

Ineffable Husbands is the ship name for Aziraphale and Crowley from the book and miniseries Good Omens. The ship’s name is derived from Aziraphale’s comments that God’s plans are Ineffable. I’m a little ashamed to admit I’ve never read the Good Omens novel, so this article will focus on the portrayal of Ineffable Husbands in the Amazon miniseries.

Aziraphale is a Principality, a class of angel. He was originally appointed as the Guardian of the Eastern Gate, in Eden, and carried a flaming sword to fulfill his duties. However, when Adam and Eve were expelled from the Garden for eating the forbidden fruit, Aziraphale takes pity on them. He gives Adam the flaming sword so that he can protect himself and Eve. This is the first sign that Aziraphale is overly attached to humanity and willing to bend the rules to protect them. This also attracts the attention of the demon Crawley, who tempted Eve, and they debate their respective actions as good and/or bad.

Over the centuries, Aziraphale stays on Earth to commit blessings and carry out the plans of God. However, he grows more and more attached to humanity and his “human” life in the process. Unlike most angels, Aziraphale consumes food and drink, although he has no need to. He’s a bit of a gourmand, and takes great pleasure in the culinary delights. Aziraphale also loves books, collecting first editions throughout history and eventually opening his own rare bookstore in London. Most angels see humanity as beneath them, and hold themselves apart; not so for Aziraphale.

It’s this attachment and this comfort that brings Aziraphale to rebel, just a little. The angels are excited about the coming apocalypse, as it provides the setting for the final battle and their victory over hell, once and for all. Aziraphale doesn’t want to see humanity destroyed over a petty squabble, so he works with Crawley, now named Crowley, to prevent the apocalypse from starting. Although they are wildly ineffective, the apocalypse is ultimately averted, and they are blamed by their respective domains. In the end, though, they save the world that they love.

The demon Crawley was the snake who tempted Eve in the Garden of Eden. After Adam and Eve are expelled, he takes on a human form to converse with Aziraphale, who protected Adam and Eve after they left. Crawley is fascinated by the angel breaking form. He wonders if he himself did what God wanted in getting the humans expelled, and if Aziraphale did the wrong thing in helping them. Their debate over the intricacies of the Ineffable Plan is the spark of a lasting connection, one that will bind them (loosely) together over six millennia.

Like Aziraphale, Crawley stays on Earth, to tempt and sway humans for darkness. He takes on the name Crowley, which could signify his burgeoning defiance of hell. When he and Aziraphale keep running into each other on opposing missions of good versus evil, he proposes an arrangement: they keep up appearances, but don’t worry about their missions as they essentially keep canceling each other out. Crowley and Aziraphale form a tentative friendship over the arrangement and keep seeing each other even when they’re not in opposition any longer. Crowley even saves Aziraphale a few times.

When Crowley is called upon to deposit the antichrist on Earth, he realizes that he doesn’t want to see hell’s plan come to fruition. He and Aziraphale agree to raise the antichrist to be normal – not realizing they’ve picked the wrong child. When they realize they messed up, they start working to make amends. Crowley realizes this puts him in a lot of danger, as hell doesn’t him to screw up their plans, but he wants to save the Earth (mostly himself and Aziraphale) regardless. Through no effort on their part, the apocalypse is averted, and Crowley is able to stay on Earth with Aziraphale.

Why Is Ineffable Husbands OTP?

Ads for Good Omens kept constantly popping up on Twitter, so I’d been anticipating the show despite never having read the original novel by Neil Gaiman and Terry Pratchett. I love David Tennant. The concept of a demon and an angel raising the antichrist was fascinating. I was raised in a very fundamentalist church that was obsessed with the antichrist and end of days, so I thought it’d be an interesting approach. Sure, I thought. I’d give it a try.

I binged the entire six-hour miniseries in one sitting. From the very first Queen song, I was hooked. Good Omens is one of the best things I’ve watched in a while, and a very large part of that comes down to the Ineffable Husbands dynamic. I don’t think a ship has so fully captivated my attention since Fitzsimmons, my all-time OTP. Good Omens is great; Ineffable Husbands is amazing.

I’m a sucker for a good opposites attract ship. There’s something so appealing about two characters who are so different still being drawn together. They balance each other out, each bringing something special to the table. It’s like two halves coming together to form a perfect whole. Opposites attract gives you that feeling of completion. Ineffable Husbands more than delivers on the opposites attract front. After all, what could be more opposite than an angel and a demon?

Despite all this, the two are continually drawn together. They should never be in contact except for the occasions where they battle, theoretically. Instead, they meet for lunch or drinks. They’re in enough contact that they answer the phone “it’s me” and the other knows exactly who it is. Because opposites really do attract. Crowley’s harsh nature makes up for Aziraphale’s fluttering anxiety. Aziraphale’s attachment to the world keeps Crowley from ditching the planet to save himself. They need each other, and they live in a strange harmony. It’s like their arrangement – they balance each other out.

There’s a lot of truly soft Ineffable Husbands content readymade for shippers. Despite the high stakes of the show – trying to stop the apocalypse and save humanity – there are plenty of moments that are pure shipping fodder. Even other characters in the show assume they are together, from Uriel telling Aziraphale that his “boyfriend in the glasses” can’t help him to a random stranger reassuring Aziraphale that he’s better off after a very public dispute with Crowley. They have a very “old married couple” dynamic that lends itself to assumption.

But the best part of the series, in terms of shipping at least, comes in the third episode, “Hard Times.” The first half of the episode is a series of flashbacks, showing how Aziraphale and Crowley got to where they are now. We met them in Eden, of course, in the opening episode. But from there we jump right to the beginning s of the apocalypse. What were the intervening years like? How did they go from an angel and a demon on the walls of Eden to the partnership that tries to stop their respective domains from destroying the Earth? “Hard Times” shows us all that.

A series of events throughout history see the two meet up, starting with Noah’s Ark and the flood, all the way up through the present day. There are so many good moments, but mostly we see a soft side of Crowley, who, for a demon, really has a soft spot for Aziraphale. But the overall best moment comes when Crowley saves Aziraphale from a Nazi trap. It seems normal until the end, when Aziraphale is bemoaning the loss of his books, only for Crowley to reveal he saved them. It’s such a soft moment, and you can really feel the love.

What’s Next For Ineffable Husbands?

The absolute worst thing about Good Omens is that it is a limited miniseries of only six episodes. The show is fantastic, and has received very positive feedback from audiences. But it’s unlikely that there will be any more canon content. Neil Gaiman created the show as an homage to the late Terry Pratchett, whose last request was to see their book adapted for the screen. However, now that it’s finished, Gaiman is ready to move on, and unwilling to create more content without Pratchett. Besides, as he put it, Good Omens

“has a beginning, it has a middle, and it has an end.”

Things are very nicely wrapped up at the end of the final episode, leaving fans with a satisfying ending if indeed there is no more canon content. Amazon could, of course, create more. If demand is high, they’ll want to create more profit, and more content is key to that. Gaiman has already said he won’t do more, and without Gaiman or Pratchett, it’ll be an entirely different show. There’s some wiggle room to create more, with Crowley indicating that he thinks that they’ll face another shot at Armageddon. We could see further series develop that further, in addition to answering the question of the Ineffable plan.

As it is, though, we’re unlikely to see more from the Ineffable Husbands. The series finale sees them finally free from obligation, having averted the apocalypse. Through some trickery – changing faces – they survive their trials and attempted executions by heaven and hell, leaving them independent operators, for now at least. Though Aziraphale still wonders about the Ineffable plan, and Crowley still worries about potential Armageddon, they accomplished their goal of saving the Earth and humanity. Now it’s time for them to relax.

This is a fun one – the shipping wiki page for Ineffable Husbands defines their status as “semi-canon,” which you don’t see very often. Ineffable Husbands is neither canon nor non-canon, leaving us in a state of limbo. It’s been a subject of much debate, with the consensus seeming to be that we can’t apply humanly standards of relationships and labels to celestial beings. Gaiman would be the authority, but refuses to rule either way. The actors, for their part, played it as ambiguous, leaving it up to the fans.

You could very easily make the case that Ineffable Husbands is canon. They’ve spent six thousand years more or less by each other’s sides. The impending apocalypse really heats things up, but there are signs of something better before that. There’s even a very heavy line where Aziraphale laments that Crowley “goes too fast” when Crowley offers him a ride, hinting that he isn’t as ready as Crowley to solidify their relationship. By the time the show starts, things are too tense to not be together. It’s time for the truth to come out, and now that they are no longer beholden to heaven or hell, they can.

On the other hand, there is a dearth of intimate male friendships in pop culture, so I won’t begrudge anyone who sees Ineffable Husbands as a pure platonic ship. The friendship between Aziraphale and Crowley is fun and refreshing, so anyone who chooses to read the ship as platonic definitely has a case to be made. Personally, from the start I saw this as something truly, heavenly romantic. The lack of clarity in the show is a little frustrating for me. But that’s what fanfiction is for – the clear content I want that Good Omens chooses to leave vague.