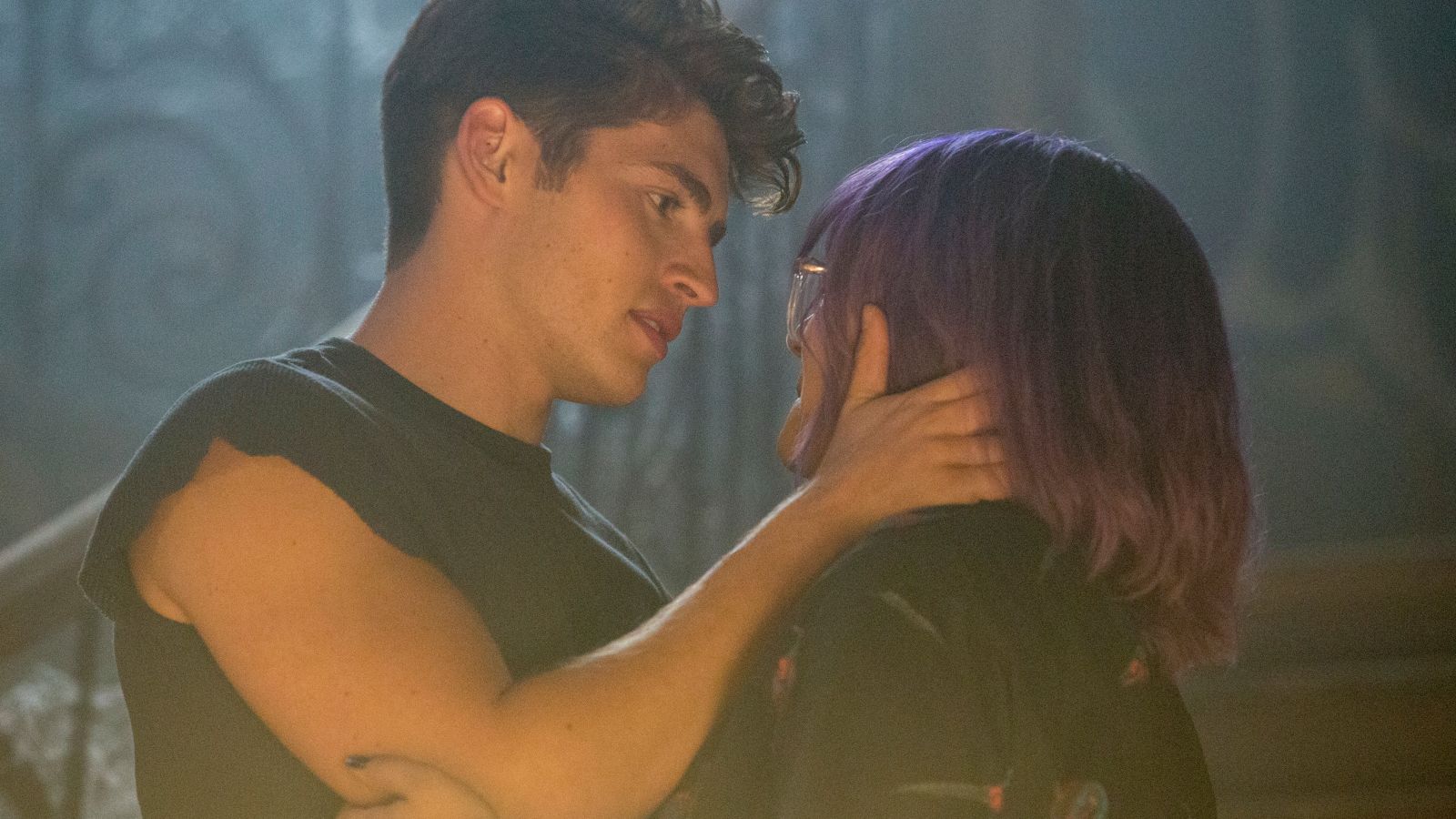 Presenting OTP Tuesday! Each Tuesday I will introduce you to a new One True Pairing! Tune in each week to find out which fictional couple you need to agonize/squee over next. I finally watched Runaways so this week I wanna talk about Gert/Chase.

Gert/Chase is one of the primary ships on Marvel’s Runaways. It consists of Gertrude Yorkes and Chase Stein.

Gertrude “Gert” Yorkes is one of the primary protagonists in Runaways. A group of teenagers discover that their parents are murderers for a mysterious organization called PRIDE and try to stop them, in the process becoming runaways and forming a family of their own. Gert is the daughter of Dale and Stacey Yorkes, enterprising scientists. She also has an adopted sister, Molly.

Before the big discovery, Gert was just a teenager. In high school, she tried to start a club to dismantle the patriarchy and was well known for her outspoken dedication to social justice and equality. When the runaways discover the truth, Gert’s convictions are tested, but she helps the team do whatever it takes to bring their parents to justice. She is helped along by Old Lace, a velociraptor who her parents genetically engineered, who shares a psychic connection with Gert.

Things get a little too much for Gert when the kids, having confronted PRIDE head-on, become fugitives. They were initially framed for one PRIDE’s murders, a ploy to bring the kids home. This means the team has to go into hiding. Although they found a good spot in an old abandoned mansion, leaving their normal lives behind has some serious consequences. For Gert, she had to leave behind her anxiety medicine. A combination of anxiety and withdrawal led her to go to the hospital.

The issue here is that, for parental consent, Gert contacts Steins, the parents of Chase. Gert and Chase had started a romantic relationship, and he saw this as a major betrayal. Gert was too desperate for relief to consider his feelings. This drives a wedge between them, though they reunite when Stacey poisons Old Lace, nearly killing Gert. But they eventually split because of Chase’s actions, not Gert’s.

Chase Stein is another of the runaways. At the beginning of the show, he was perhaps the one least likely to become a fugitive in the interest of bringing justice. Chase is portrayed as a jock, a cool kid who focuses on athletics and ignores the reality of the world. However, there’s a dark secret hidden behind his popular exterior. Chase’s dad, Victor, a brilliant scientist, is an abusive asshole. Chase became fit in the interest of being able to physically stop his dad.

However, there’s more to Chase than that; he is incredibly smart like his father. He creates a schematic for powerful weapons he calls “fistigons.” When Victor erratically and suddenly becomes a supportive, loving father, he and Chase work on the weapons together, Chase’s design working with Victor’s experience. Seeing a new side of his father, Chase is reluctant to fight PRIDE. However, Victor suffers a severe return to his old ways and tries to kill Chase, putting things in perspective.

Before the big confrontation, Chase went against his friends, destroying hard-won evidence. Victor’s life is in PRIDE’s hands, and he can’t hurt his father. But when they have to run away, Chase goes all in for his new family. He helps take care of Gert when she struggles, restores a car so they have transportation, and even serves as a stand-in family for Molly during her quinceañera.

In the end, though, Chase can’t do it. When Victor reaches out, telling Chase he is dying, Chase decides to leave the runaways. He goes back to his old life, even starting to work for PRIDE. The team takes this second betrayal harshly, especially when Chase’s actions lead to a direct assault by PRIDE. Chase himself was kidnapped and held in stasis by PRIDE’s shadowy leader.

This is one of those situations where I wish I’d written an article before I caught up to the source material. The end of season two really threw a wrench into my ship, with Chase betraying the runaways and leaving Gert behind. Now, with Chase held in stasis and in danger of imminent death, things don’t look so good for Gert/Chase.

But before all that, Gert/Chase was an amazing ship. It had a lot to recommend it, from the subversion of expectations to the growth both characters showed together. Plus, both Gert and Chase are adorable, very enjoyable characters who became all the cuter when they got together. Here’s hoping season three fixes all this, because I’m not ready to let this ship go.

Gert/Chase really plays with what you expect – Runaways itself likes to subvert audience expectations, at least in terms of the relationships that play out. The beginning of the show seems to go for your standard set-up. Popular, classically handsome, athletic Chase is interested in conventionally pretty, goodie two shoes Karolina Dean. Gert has an awful crush on Chase, but thinks she has no chance. It’s a standard teen romance set-up. If this was a teen romcom, Gert would then fall in love with her best friend.

But Runaways isn’t about the standard expectation. They really managed to flip things on their head, starting with the groundbreaking reveal that Karolina is a lesbian. Gert starts to pick up on the vibe that Karolina is interested in Nico Minoru, another of the runaways. Karolina defensively asserts that Gert is just using wishful thinking to try and get Chase to herself. But in the end, Karolina does end up with Nico (in an awesome openly queer relationship!). Chase also revealed that he is interested in Gert. Most importantly, he reveals this before Karolina and Nico get together, proving that Gert isn’t a consolation prize.

Gert/Chase is delightfully contrary to what we’d expect from a standard teen drama. Chase is not a simple jock who only cares about sports. But he’s also not a secret tortured genius forced into sports by his parents; he genuinely loves lacrosse and quotes his coach constantly. Gert, on the other hand, is not a caricature of a “social justice warrior.” She believes passionately about making the world a better place. And she’s fallible, being called out to her double standards. When that happens, she actively works to do better. These characters are both genuine, and to see them come together is interesting and delightful.

One of the best parts of the Gert/Chase relationship is how soft it can be. They definitely have their issues; no relationship is perfect, and a relationship between two teenagers who are living on the run and dealing with the ramifications of their parents being murderers is bound to have problems. Gert and Chase fight, and don’t always see eye to eye. Chase’s final betrayal may have led to their split, but they had issues well before that.

But Gert/Chase can be so incredibly soft. This is seen most clearly in the early stages of their relationship and when Gert starts to struggle with her mental health. The early stages of Gert/Chase seem to be focused on finding their bearings. Both Gert and Chase seem to be at a loss for how to have a relationship together. Gert is shocked that Chase wants to be with her, and Chase doesn’t know how to be with someone like Gert. So they figure things out together. They get together by having sex, but that seems like it might be a one-off until they talk about their feelings.  They validate each other and start a real relationship based on open communication and clear feelings.

We later saw a really soft side of Chase when Gert’s mental health and medication withdrawal started acting up. Between withdrawal-induced brain zaps and Gert’s mounting anxiety, she feels like she can’t contribute to the team. But Chase is there by her side and taking care of her. He reassures her when she says she is uncomfortable having sex, despite it being their start. Chase may have no experience in dealing with mental illness, but he never shies away from Gert’s feelings or helping her deal with them. It’s so sweet and so soft.

Things are not looking good for the ol’ Gert/Chase ship as of where we left off with Runaways. Season two ends with things looking bad for everyone, not just Gert and Chase. Chase left the runaways and returned to his normal life, despite knowing what he knew. He even starts working for PRIDE as an “intern” when his parents promise him he can help lead PRIDE – which is technically a charity organization – into a better future. He accepts that, and tries to convince the other runaways to join him.

While the others aren’t having any of Chase’s bullshit, them agreeing to meet with him is their downfall. PRIDE tracks him and the other parents attack, trying to capture all the runaways and force them to return home. Gert and Molly go off together, trying to escape Dale and Stacey. Although Molly makes it back to the hideout, Gert is captured by Dale. Dale is concerned about Stacey’s increasing violence (not realizing she is possessed by an alien being) and takes Gert and Old Lace on the road with him.

For his part, Chase is no better off, although he gave in to PRIDE. His father is also possessed by the aliens, and in fact leading them. When Chase and his mother figure out the truth, they are knocked out and kidnapped. The ending reveals that the aliens are keeping them in stasis to serve as future “fuel.” That doesn’t sound so great for Chase. So even aside from the fact that Chase’s betrayal split up the Gert/Chase dynamic, neither of them are in good straits. Both are in imminent danger and separated from the group, which makes it hard for them to be rescued. It’ll be interesting to see how season three reconciles all this.

Yes… and no. Gert/Chase became canon at the end of season one. The kids, who are planning to confront their parents at a mysterious dig site PRIDE is using for nefarious purposes, think things are ending. At a school dance – their cover for why they’re all together – Gert and Chase share a special moment, where Chase reveals he’s always thought of Gert and how special she is. They end up having sex at the dance. Later, Gert indicates that it’s a one-time thing, rather than a precursor to an actual relationship. Chase takes this hard, but realizes Gert is just trying to protect herself, and they get together after a serious and needed chat about their feelings.

Things have been good for a while! Gert and Chase share a room at the hideout. They have a soft time to themselves, quietly supporting each other while they try to save the world. It’s nice. And then it ends. On the night of Molly’s quinceañera, after a wonderful evening, Chase tries to sneak out. Gert catches him and forces him to say goodbye, leading to an unpleasant, emotional situation for all the runaways. It’s the end of the road for Chase as a runaway, and for Gert/Chase in particular.

Of course, it may not be the end of the road. Season three may bring these two back together. Since both are in bad situations, it will be interesting to see how they are saved. Maybe they find a way to save each other, and reconcile their differences. Maybe they will realize what’s really important, after fearing for their lives and their futures. We’ll have to wait awhile to see what season three brings. But I, for one, am really hoping Gert/Chase comes back.