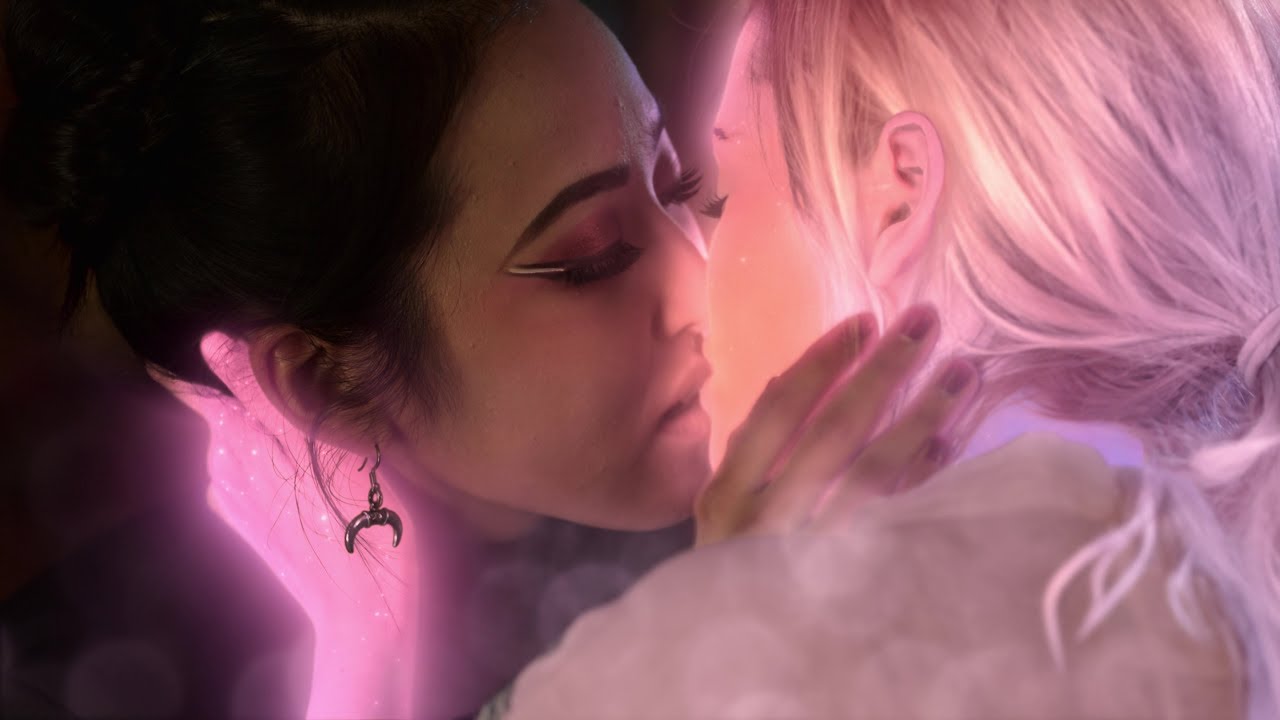 Presenting OTP Tuesday! Each Tuesday I will introduce you to a new One True Pairing! Tune in each week to find out which fictional couple you need to agonize/squee over next. I finally watched Runaways so I’m dying to talk about the game-changing Deanoru.

Deanoru is the ship name for Karolina Dean and Nico Minoru from the Hulu original Marvel’s Runaways, which focuses on six teenagers finding out that their parents are supervillains – and they might just be superheroes in the making.

Karolina Dean is one of the six main characters of Runaways. Before the show really kicks off, she is the perfect smiling church girl. Her mother runs the cult Church of Gibborim, and Karolina’s enthusiastic endorsement is key to reaching the youth demographic. Despite being beautiful and friendly, Karolina doesn’t have many friends. Everything changes when her previous group of friends reunites for one night that will change everything.

On that night, the friends discover that their parents are killers, and freak out. They decided to investigate. Karolina initially was less than enthusiastic, seeking an alternative explanation for what they saw. She soon realizes that her controlling mother has been keeping too much from her and that she might have superpowers. Karolina experiments with her powers, learning she can glow, fly, and shoot light at enemies.

Things come to a head when the kids confront their parents at a construction site. Karolina offers to hold off the parents with her powers while her friends escape, but meets her match in the mysterious Jonah, who seems to have powers just like hers. In the aftermath, held captive by her mother and Jonah, Karolina learns the truth: Jonah is her father. She’s rescued by her friends, but can’t shake the knowledge. She began seeing Jonah in secret to learn more about herself.

Karolina and her friends, now living in an abandoned mansion, try to figure out their next move. In the meantime, Karolina learns that Jonah is an alien who crashed on Earth millennia ago, and is trying to free his spaceship and his – her – family. She begins to feel sympathetic, and tries to help his efforts, even when it means clashing against her friends. In the end, she turns against Jonah, who kidnaps her and holds her in stasis.

Another of the six runaways is Nico Minoru. Nico was a happy kid until her sister, Amy, is found dead one morning. After Amy’s death, Nico’s world changes. Her group of friends disband completely. Feeling alone and angry, Nico closes herself off from other people. When Alex Wilder, formerly her best friend, suggests the friends get together one night, she’s reluctant. Nico eventually shows up, and thus also sees her parents commit murder.

Nico takes the betrayal better than the others, having already decided her mom is not a good person. She’s more interested in her mother’s magic staff and the possibility for answers about Amy’s death. She’s also happy to rekindle her friendships, with Alex in particular. However, their closeness – and potential budding romance – is destroyed when Alex reveals that he knows Amy’s death may have something to do with Nico’s mother.

Hurt and angry, Nico focuses on the mission of stopping their parents, and gives Alex the cold shoulder. She begins to take on a leadership role, and tries to keep the team intact. Having stolen the staff from her mother, Nico begins to learn how to harness its mystical power. When the kids run away and Alex gets distracted, Nico takes the reins. However, things go a bit off the rails when she learns that Jonah was the one to kill Amy. In the big confrontation, she kills Jonah.

Nico begins to struggle with guilt over killing Jonah and a power struggle with the staff, which seems to be taking over. The darkness inside scares her, and she even discards the staff, only using it again when Karolina needs her. When Nico goes to confront her parents, it is the staff’s power that saves her, and leaves her ready to fight another day.

I’ve had Runaways on my to-watch list for months, and most of the reason for that is what I’d heard about Deanoru. A teen drama with a Marvel flair that also happens to have a canon queer couple? That’s definitely something to check out. I’m really glad I finally gave it a shot because, as it turns out, Deanoru was definitely worth the time investment.

Runaways has its ups and downs, but Deanoru is definitely a positive aspect. It’s not a perfect relationship, but it is uniquely perfect for the setting and the characters. They struggle, and they fight, but they keep coming back to each other because, in the end, Karolina and Nico truly love each other. They make each other better.

Part of the fun for Deanoru is how hilariously unmatched Karolina and Nico are. From the start, they’re seen as polar opposites. Opposites attract is always a fun ship dynamic, and Deanoru definitely delivers on that front. Karolina is blond and smiling. She’s seen as the perfect church girl and is the face of a cult on the rise. She’s close with her parents and never steps a foot out of line. Nico is very different. She is the epitome of an angry goth girl, dressed in all black with exaggerated makeup and hair.

She practices Wicca and connects with the occult. Nico has a strained relationship with her parents, especially her mother. She is an angry, upset kid after losing her sister, and closes off the world. Even their powers emphasize how different they are: Karolina glows bright colors and shoots light, while Nico uses occult powers that turn her eyes black.

But Karolina and Nico are still drawn to each other, despite or perhaps because of their differences. Nico is able to help Karolina when she first discovers her powers and starts to feel like she’s some sort of freak. Nico tells her that her glow is beautiful and it’s a reflection of who she is, a bright and beautiful person. Conversely, when Nico starts to fear the darkness inside her and what she is capable of, Karolina comforts her. She tells Nico that she needs to embrace the darkness and accept that it is a part of her. Sure, their differences sometimes clash – Nico killing Jonah is a point of contention, as Nico did what needed to be done, but Karolina sees it as an attack on her family — but in the end, they always come back to each other. They balance each other out.

In a vacuum, Deanoru would be a fun ship. It’s got a lot of great elements, like opposites attract. It’s fun to see a couple who fight and work together in superhero media, rather than one hero and one helpless victim. Both Karolina and Nico are fascinating, complex characters, and watching them develop together is a lot of fun. But Deanoru doesn’t exist in a vacuum – and that makes it even better and more important.

I cannot begin to describe how groundbreaking it is to watch a wlw relationship unfold in a teen drama done by a major studio like Marvel. Like, I knew going in that Deanoru was a major ship in the fandom, and was fairly confident that it was canon, but I had no idea that it was going to go the way it did. Karolina’s queerness and specific interest in Nico is telegraphed from the start, rather than a sudden “oh, I like girls” moment to get to a ship. It’s a natural progression and an absolutely beautiful depiction of a young wlw accepting herself and who she is and who she loves.

Even knowing about Deanoru going in (and the fact that Deanoru was a major motivation for me to watch), I’ll admit I bought the hints of Nico/Alex in the first season. But it doesn’t begin to compare to the joy of seeing Deanoru become canon. And then it continues to be canon! Deanoru isn’t a ship that grows over time, stays a will-they-won’t-they source of drama, and constantly leaves fans on the edge of their seats. No, Deanoru is somehow both an in-your-face canon that you can’t ignore and quietly a part of these characters and this show. It’s treated as so normal and accepted, and I wanna cry.

The end of season two left things pretty badly for Deanoru. There was a lot going on and a lot of unresolved drama. Family issues plagued both sides. Karolina was struggling with the fact that Nico killed her father (and for some reason is really upset about her murdering maniac of a father who she never really knew dying). Nico is caught up in the knowledge that Jonah murdered Amy, which is why she did kill him. They managed to move past this upsetting situation, because their feelings for each other are more important, just in time for another complication: Xavin. Xavin was a stowaway on Jonah’s ship who believes they are Karolina’s destined soulmate. They insist that they are Karolina’s betrothed, throwing a major wrench into the Deanoru relationship when it’s at its rockiest.

The season two finale saw the parents try to run down their runaway kids and reunite their families, by force if necessary. The kids were forced to split up for safety. Although Nico and Karolina initially stick together, they split up when Karolina tries to draw off the enemy to let Nico escape. Nico is being attacked by a device that makes her unable to speak correctly, meaning she can’t even tell Karolina she loves her before Karolina leaves.

Although Nico makes it back to the hideaway at the end of the episode, Karolina has been captured by a reborn Jonah. It’s unclear what his plans are, since he initially wants to keep her in the family, but the final moments show her as a potential “food.” Either way, Karolina and Nico will have to work hard to be reunited in season three.

Yeah baby! I am beyond thrilled to say that, yes, Deanoru is explicitly and continually canon since the end of season one. There were hints throughout season one that Karolina, at least, had more than friendly feelings for Nico. Despite the first season seeming to go more straightforward (heteronormative) in terms of ships, emphasizing Karolina with popular jock Chase and Nico with awkward nerd Alex, it was clear that this wasn’t where the show was going to end up. Karolina’s interest in Nico starts early and shows up consistently. When they are at a dance in the finale, believing it might be their last night on Earth, Karolina kisses Nico, starting a beautiful relationship.

The show makes it very clear that Deanoru is canon, full stop. There are discussions of the couple by the runaways, especially Alex, who admits he has to adjust to the fact that Nico – who he was romantically interested in – is now dating Karolina. Karolina and Nico sleep together when they establish a home base in the abandoned mansion. While they have their struggles, it’s shown as the way any relationship will hit rough spots, rather than a sign that they’re not meant to be. Even Nico killing Karolina’s father is not enough to shake them apart for good.

I’m so unused to my ships being cheerfully and blatantly canon, even in straight ships. So often, shows rely on relationships to cause tension and keep viewers hooked, so I’m used to being dragged along, endlessly waiting for my ship to become canon. But Deanoru is different. It’s beautifully, wholly canon, made canon early on in the show, and continues to be canon for as much content as we currently have. My wlw heart can’t take it the joy. Deanoru gives me life.