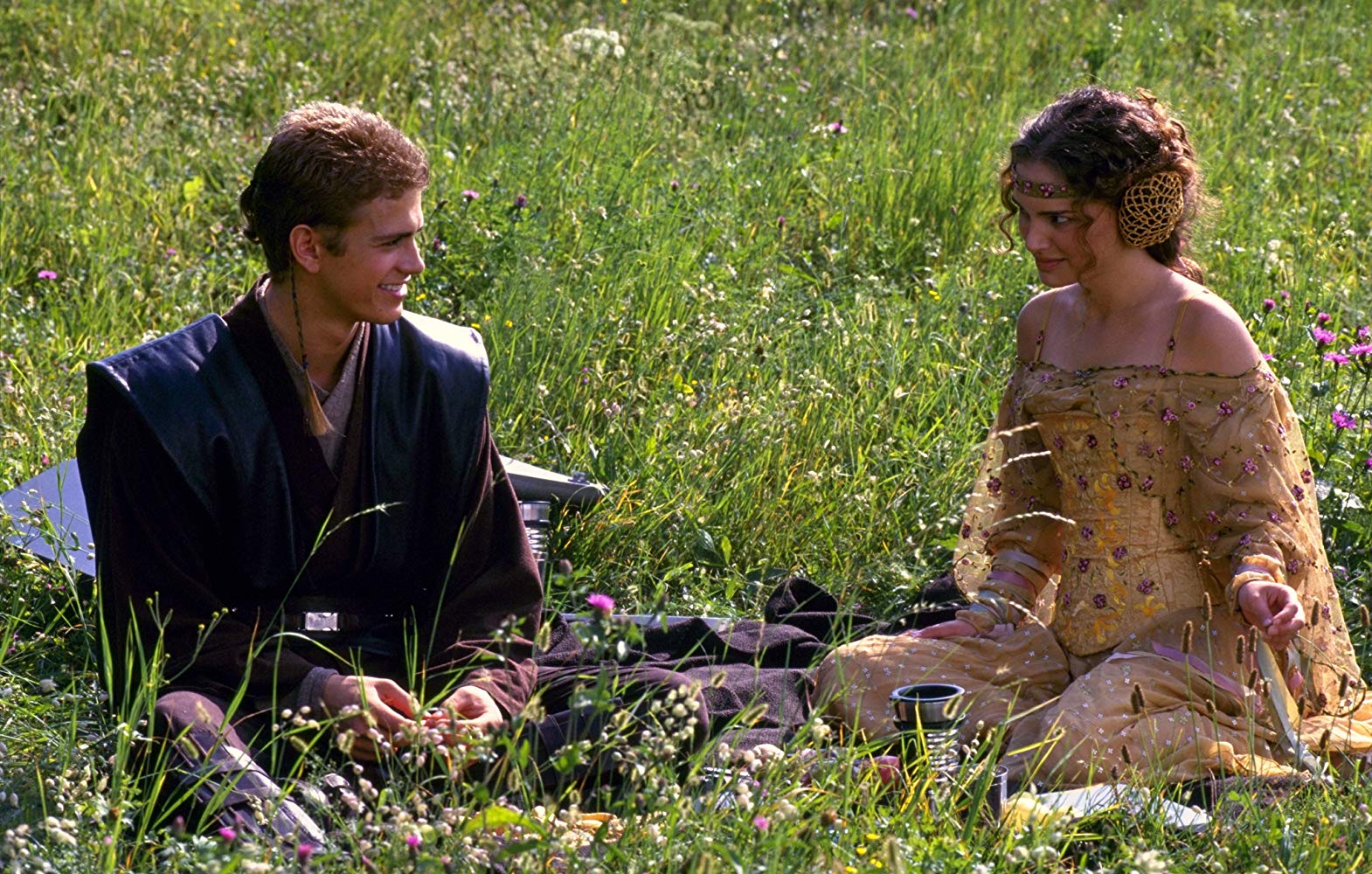 Presenting OTP Tuesday! Each Tuesday I will introduce you to a new One True Pairing. Tune in each week to find out which fictional couple you need to agonize/squee over next. This week is Anidala!

Anidala is the ship name for Anakin Skywalker and Padmé Amidala from the Star Wars prequel era.

Anakin Skywalker is the catalyst for the entirety of the Star Wars Skywalker Saga. Born a slave on Tatooine, he could hardly have known what his destiny was. Instead, Anakin was just a precocious boy, kind and determined. He was talented and seemed to have special powers. Anakin’s life changed when two Jedi, Qui-Gon Jinn and Obi-Wan Kenobi, were marooned on Tatooine after rescuing Queen Amidala of Naboo. Recognizing Anakin’s latent force powers, they free him and whisk him from his home to train as a Jedi. Although Anakin was hesitant about leaving his mother, he was excited to become a hero.

For a time, becoming a hero was exactly what Anakin did. His force powers made him strong, and guidance from Obi-Wan ensured that he didn’t get too far off track. However, things start getting tense in the galaxy, and even Anakin’s mentor Chancellor Palpatine can’t keep things calm. When someone attempts to assassinate the now-Senator Amidala, Anakin and Obi-Wan are assigned to protect her and find her enemy. Anakin is left to protect her, but is forced to deal with his feelings for her – contrary to the Jedi way – and his worry over his mother back on Tatooine.

Things take a sharp turn. Anakin’s mother is killed and he goes dark avenging her. He and Padmé confess their love for each other, despite knowing their affair is forbidden. A war starts and the Jedi are put on the front lines. In the midst of the Clone Wars, Anakin becomes a legendary figure. Things look bright – Padmé is even expecting twins. But Palpatine, secretly a Sith, corrupts Anakin. He becomes the Sith Lord Darth Vader and helps overthrow the Republic. In the process, he loses Padmé and his family. In the end, he is left alone and broken.

Padmé Naberrie was interested in politics from a young age and was elected Queen of Naboo at only fourteen. While Naboo is a peaceful planet devoted to democracy, her reign was challenged early as the galaxy began to turn to darkness. The Trade Federation, at the urging of Darth Sidious, blockaded the planet. They were told that the young Queen Amidala was weak and that they would win. But Padmé, devoted to her people and a bit of a radical, fled the planet to seek help at the Senate. When they would not act, she returned to Naboo to fight the Federation head-on.

Thanks to quick thinking and diplomacy, Padmé was able to forge an alliance with the Gungans, a non-human race on Naboo. Together, they stopped the Trade Federation, earning Padmé a lifelong enemy in Federation Viceroy Nute Gunray. Ten years later, this enmity would erupt in a series of assassination attempts. Now a senator herself, Padmé refused to be cowed from the important vote to create an army of the Republic. Unfortunately, she was overruled. Sent to Naboo for her safety, with Anakin Skywalker for protection, Padmé finds herself falling for the young Jedi.

Although she tries to deny the attraction, she cannot hide how she cares for Anakin. They go into battle together, and Padmé confesses her love, thinking they are about to die. When they survive, they secretly marry. Throughout the Clone Wars, Padmé continued her work in the Galactic Senate to combat a growing corruption in the Republic. When Palpatine – formerly a Naboo senator – takes over, Padmé decries the death of democracy. When she learns Anakin has turned, she goes to confront him. He lashes out, and Padmé goes into labor. Although nothing went wrong, she died soon after giving birth.

Why is Anidala OTP?

As The Clone Wars returns for its final season to remind us of a better time in the Star Wars fandom, it’s hard not to appreciate Anidala. Let’s be real: Anidala has what Reylo wants. Anidala is a ship that offers a beautiful but tragic love story, doomed from the start. Anakin is a consummate portrayal of a fall from grace, and Padmé’s dignity and strength of character stand out.

Of course, Star Wars tends to be a bit rough on all its ships, and Anidala is no different. Any prequel stan can tell you that the ending is just as painful as the journey is compelling. But even knowing its ultimate end, it’s hard not to love Anidala as it happens. And hey, Anidala gave us two beautiful gifts in Luke Skywalker and Leia Organa – they deserve some credit for that.

The story of how Anakin and Padmé came together is truly an interesting case of opposites coming together. On the one hand, we have Padmé Naberrie. She is a privileged daughter of a peaceful and prosperous world. She is active in youth political groups, supported by a loving family, and has a bright future ahead of her. When the two meet, she is a queen. On the other, we have Anakin Skywalker, born a slave, living a destitute life on a wasteland planet with only his mother. He is the lowest of the low, socially and economically speaking.

But when the two meet, Anakin has no idea that Padmé is a queen. She’s masquerading as a handmaiden for her safety, so Anakin is able to relate to her without any awe or concept of class difference. He just sees her as a caring, good-natured, beautiful girl who cares about him, a lowly slave. Likewise, for all her privilege, Padmé really is a caring person. She is upset to see slavery still exists in the galaxy, and is charmed by this outspoken little boy.

Of course, their differences are more than just their backgrounds. When they reunite as adults and endure an awkward, halting courtship, it’s clear that they are of very different molds. Anakin is aggressive and cynical, while Padmé believes in the good of the universe and of people. Politically speaking, they’re worlds apart, and there is a huge social divide between a Jedi and a Senator. But they are drawn to each other regardless, and the gaps between them are quickly bridged. It doesn’t matter that Anakin is a former slave now living in service to a religious group, or that Padmé is a former queen with massive political power. What matters is how they feel.

Of course, the story of Anidala is ultimately one of tragedy. We knew going in how things were going to end up. The Star Wars original trilogy made it clear that there was no happy ending for Anakin Skywalker. His children were separated and raised in hiding, so obviously there was no happy family dynamic. Luke didn’t even know who his father was – the reveal that Darth Vader was once Anakin Skywalker is a bit of a shock. So when we were given the backstory of how Anakin fell, we knew we were being set up for tragedy.

What the prequels gave us was more than just Anakin’s tragedy, though. There is hardly any hint of Padmé in the original trilogy; she’s a mere footnote to Anakin’s journey. But now, in the prequels, we finally get to meet Luke and Leia’s mother. Who was the woman who loved Darth Vader? What happened to her that there is no memory of her? Before the prequels, all we had was speculation. Now we have the full story – and it is a heartbreaking story.

In the prequels, we see a story of a boy meets a girl. Of course, boy is the destined chosen one who will bring balance to the force, and girl is a teenage queen, so it’s not exactly your typical love story. They fall in love, as tends to happen. Watching Anakin and Padmé struggle against their feelings, only to give in, adds to the inevitability of this story. There’s a time when they are happy. Even in the midst of a galactic war, they take comfort in their love and in each other. But it is not to last, and the real tragedy is that the love between them is what ultimately leads to their ends.

What’s Next for Anidala?

As I said, we already knew the ending for Anidala before their story even started. There was never going to be any “next.” There was only an end. Of course, those currently watching the final season of The Clone Wars are still in the thick of things, Anidala-wise. As the series takes place before and up to Revenge of the Sith, things have not quite yet ended. That only means more tragedy is in store, as the end we all know is coming will eventually have to happen. Fans are already upset, knowing that Order 66 and the death of the Republic are coming – so, too, is the end of Anidala.

It was inevitable from the start. The deck was stacked against them. While, yes, they love each other, and that love was strong enough to overcome their differences and their backgrounds, it was not enough to overcome the downfall of the entire galaxy. Too many forces at work were against them. The Jedi would never have allowed Anakin to continue if they knew he was married, and they were unlikely to give up their chosen one, so they could not condone his relationship. On the other hand, Palpatine was manipulating Anakin for his own ends. At first, that was in support of Anidala, but only so the relationship could be used to turn Anakin.

As the Republic approached its end, there was no turning back. Corruption has taken deep root. Widespread war captivated public opinion. Charismatic leaders were not to be trusted. And the Jedi, who were supposed to save the galaxy, were hobbled by indecision and inaction. And with the Republic’s end came an end to any chance of happiness for Anakin and Padmé. Their love was of a specific moment, and that moment passed.

Again, Star Wars is not easy on its ships. Canon-confirmed ships are few and far between, and those that do become canon seem to inevitably end in tragedy, rather than a happily-ever-after. Anidala falls into that camp. Yes, it is a canon ship. Anakin and Padmé clearly were together; they even got married and started a family together. Now, there is some debate as to how their relationship ended. Some argue that it ended with Padmé’s death, while others argue that Padmé clearly ends their relationship with Mustafar when she goes to confront Anakin.

But whichever way you slice it, Anidala ends. I don’t know if Lucasfilm just has a vendetta against happy romances, but Anidala is like most other Star Wars romances in a hard ending (if they even get a real beginning). In another world, perhaps they may have had a better chance. If the Jedi had listened better and realized the arrogance of their ways, maybe Palpatine could have been stopped. If Anakin had felt better supported, he may have turned to his friends instead of to the Dark Side. Even if Padmé had survived childbirth, there may have been a chance. Maybe Anakin could have been redeemed sooner, rather than twenty years later, and maybe together they could have saved the galaxy.

Anidala may be canon but that other world – that better world – sadly is not. But have no fear – canon is only the beginning, not the end. There is so much fan-created content to scratch that Anidala itch, and speculate about a different world where maybe, just maybe, Anakin and Padmé could have had their happy ending. If you want some positive Anidala content to wash away your Clone Wars feelings, head over to AO3 or Tumblr for a quick fix!