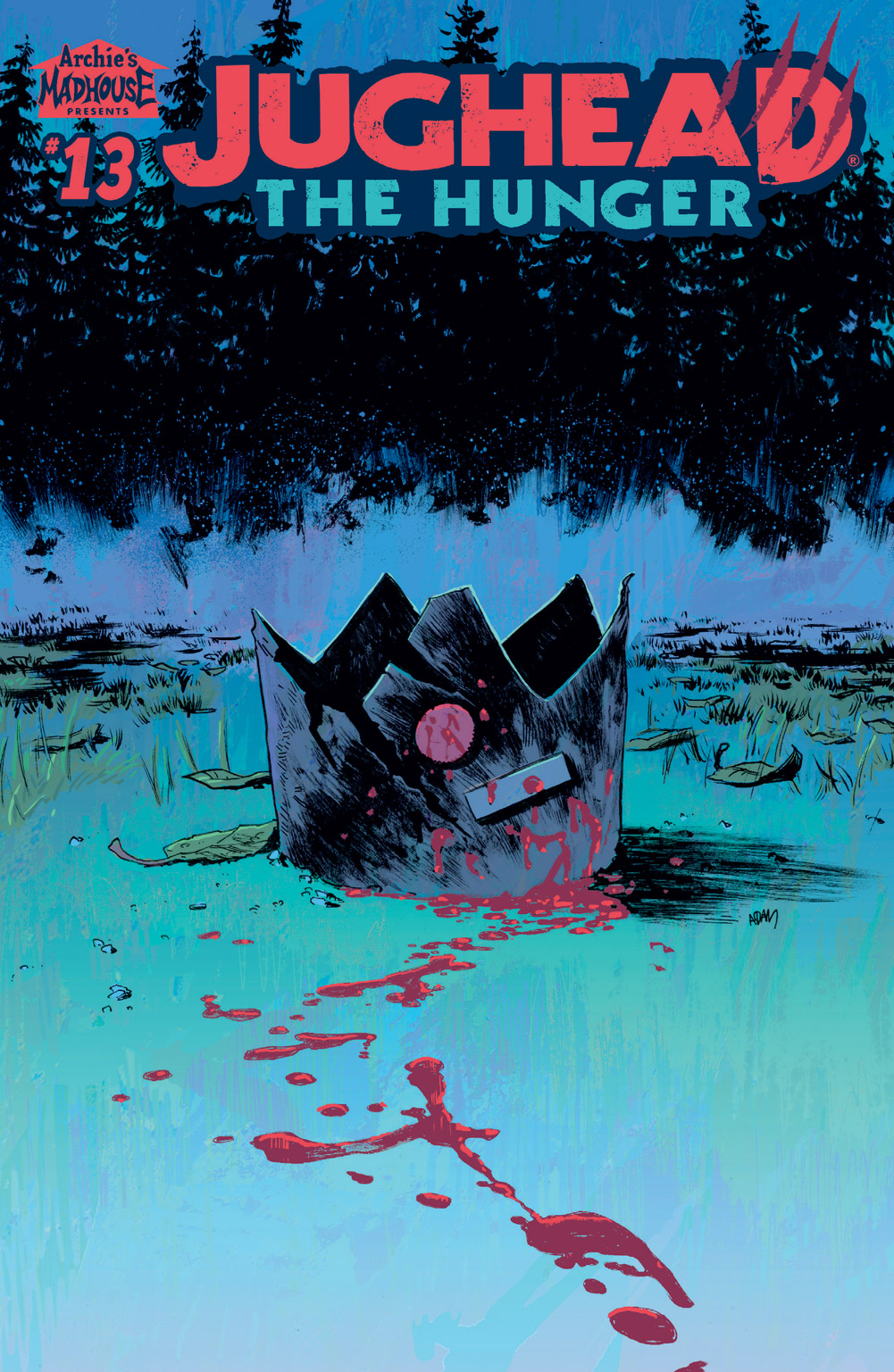 One Last Howl In Jughead the Hunger #13

The whole series has to lead to this moment: a battle between family and destiny. Who will win this crusade? A young man on one side wanting to get rid of his curse and another trying to bring the worst out of the other. Jughead verses Bingo — werewolf versus werewolf. Wouldn’t that be amazing to see? Well, this barely happens in Jughead #13. As this series has been getting better with each issue, Jughead the Hunger #13 is a bit of a setback. As readers may be asking how this could happen, well there is a reason.

This will be explained soon, but until then let’s take one last trip to Riverdale in the last issue of Jughead the Hunger #13.

The Chilling & Thrilling Plot Of Jughead the Hunger #13

Jughead the Hunger #13 begins where the last issue left off; we are at Jellybean’s slumber party and all of the girls are watching a horror movie. Suddenly, all of Jellybean’s friends become terrified when they swear they have seen a werewolf in the living room window. Immediately there was a knock at the door and Jellybean told everyone to leave. As all girls run, Jellybean opens the door to find a werewolf in the doorway.

The book then changes to focus on Betty and Archie dealing with a wolf-Jug situation in the forest. The pair are thrown by the beast when Betty decides she cannot hold back anymore. As she is about to attack Wolfjug with her full strength Hot Dog appears to protect the pair from Wolfjug. Wolfjug becomes spooked and runs away from the scene.

No Spoilers From The Daily Fandom

Back at the Jones’s home, Jellybean is staring down Wolf Bingo. He begins to walk closer to her when she suddenly transforms into a werewolf herself. Suddenly Wolfjug appears to protect Jellybean by attacking Wolf Bingo, but Jellybean, now in her wolf form, stops the fight. Jughead becomes shocked to notice Jellybean can transform. She begins to tell him when it happened and how long she’s been transforming. Bingo begins to speak about how special Jellybean is. He then gives her a choice: either become part of a werewolf pack or she will reject her family legacy like Jughead. As she was about to decide, Betty and Archie arrived to stop Bingo. Bingo attacks Betty for dealing with Jellybean’s decision.

The Daily Fandom won’t spoil any of the decisions or cameos, you will just have to read the issue to find out what happens with Jellybean, Jug, and Bingo.

Growth With Love In Jughead the Hunger #13

Throughout Jughead #13, there is a very grave situation that Jughead has to deal with. Jughead is fully distraught by the knowledge that Jellybean is a werewolf. As he has protected her his whole life he has never wanted this life for her. Now that it has happened he doesn’t know what to do. The reason this scene is astounding is that Jughead has a heart-to-heart with her. The dialogue doesn’t seem forced and Jughead shows how much he loves her. Then, after his spiel, he lets Jellybean choose what life she wants for herself.

This shows a bit of growth with Jughead. As much as he hates his curse he knows that some people like Bingo love it. If this had happened at the beginning of the series Jug wouldn’t have given her a choice and would have made her go against her werewolf abilities. Jughead has been through a lot in this series and it’s great to see that he has grown a bit to let others choose their own destiny like he chose his own.

Is That The End?

This comic series remains an excellent read from beginning to end. The writing and art were always superb. Jughead the Hunger #13, though, may have great writing but this issue may anger some readers. This series kept getting better and better with each issue and it saddened a lot of readers to hear that it would end with Jughead the Hunger #13.

Ending so soon meant many of the plotholes may never be solved, which made many fans wonder if there will be a proper ending. When reading a page-turning comic waiting to see what the last scene could be, the book ends with a new series plug.

If readers do not know, there a new crossover mini-series coming soon from the Archie Horror line. It combines the universes of Jughead the Hunger and Vampironica. This series is exciting news for fans of both series, but with the announcement, it seemed like the new book would be its own contained story. Like DC crossovers such as the recent Injustice vs. Masters of the Universe. Where certain comic characters are used for a “What If” story. That is what many thought would have been the case for this crossover. Now, readers see that this new series is not an interesting crossover but a new chapter of the Jughead the Hunger storyline.

Jughead the Hunger focused on Jughead becoming a werewolf and trying to cope with his new powers. He’s had to deal with the choice to either succumb to his powers or create a whole new destiny for himself. With that, he also had to deal with the consequences that came out of his actions. As he looked for a cure, he had to deal with other supernatural events in Riverdale. Through it all, he always had his friends behind him, even if it took them a bit to come around.

Now, when everything seems to calm down his cousin Bingo comes back and tries to ruin the life he has made for himself. The series as a whole showed readers that they can make their own destiny and don’t have to follow tradition. With the bonds you create with others you can conquer anything that stands in your way. There may be a few bumps in the road, but things will turn around.

How to Patch up Wounds

It would have been best to keep everything in this issue, but keep Jughead optimistic about the future. The story could have been open-ended with only some closure and that would have been fine too. With the ending that fans received there is no ending for the overarching story. Instead of making the crossover series an enjoyable treat for fans, it is now an obligation to read to find out what happened to these fan-favorite characters.

The plug seemed so forced that it devalued the finale of the series. It’s great that this will not be the last time we see these characters, but a small closure to the series would have been appreciated.

Final Howls In Jughead the Hunger #13

Even though the ending of this issue bothered me a bit at the end, everything up to that moment was excellent. As I said, the art was superb and the writing was fantastic. Even though the werewolf fight was short and could have been greater it was still grand to see. Seeing Jughead grow more mature was amazing to see as well.

This issue could have been way worse, but with this team on the book, it could never have been unreadable. There is closure I would love to see, but I am happy that this isn’t the last time I will see the trio again. I just hope that after the end of the miniseries we do get an ending to the Jughead the Hunger. It deserves a real ending and not a plug for something new, the ending could even be open-ended.

There was just a story that was being told and I feel the underlining meaning of the story of a teen struggling with life as a werewolf may get lost in the new series. I really don’t believe that a series where the stunning Vampironica is going to have time to deal with Jughead’s personal problem. I could be wrong, and the crossover series may exceed my expectations and be a pleasant surprise. Even though I’m still a bit peeved with the plug and how the ending was handled I am still excited about what is coming next for the trio.

As this shouldn’t be called an ending it should be titled a new beginning. Still, if you are a fan, pick up the issue. It is astounding and will prepare you for what is to come. Like always, though, it will leave you hungry for more. Also, stay tuned for mine and @sharecacole’s joint review of the new crossover series coming this month!